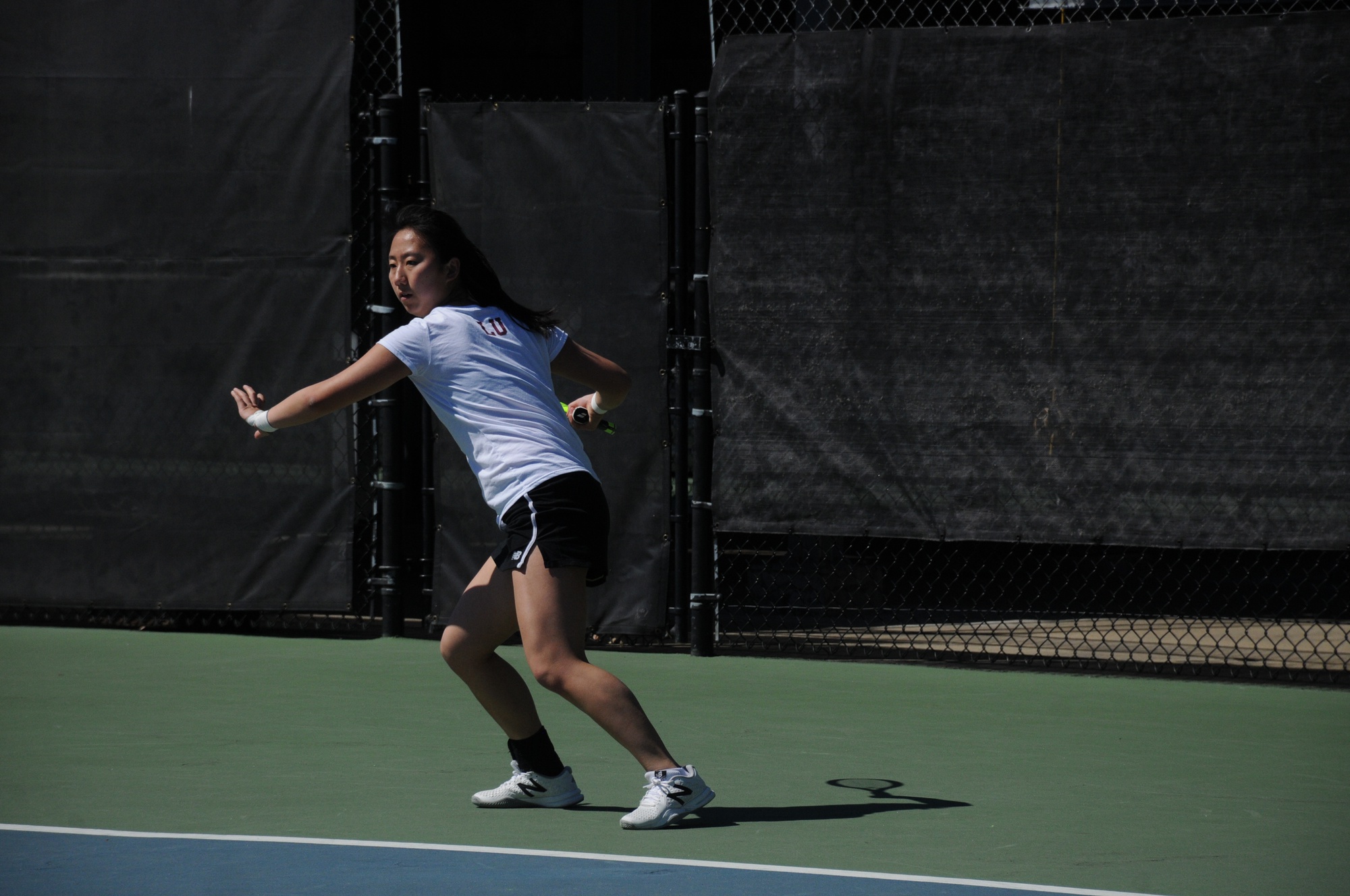 Harvard women's tennis improved its record to 7-8 as it nears Ivy League play at the end of March. By Abdur B. Rehman
By Ronni Cuccia, Contributing Writer

Harvard women’s tennis (7-8) did not really have much of a rest over spring break. The team was scheduled to play five games in eight days over break, but the contest against UC Santa Barbara was canceled due to rain. Ultimately, the Crimson won two matches at home and then traveled to California, where it split a pair of contests.

In the last match of the team’s visit to southern California, Harvard came up with a win against Cal State Northridge (2-6). The Crimson started the match on a positive note by sweeping doubles. Junior Erica Oosterhout and Natasha Gonzalez led the charge for Harvard by defeating freshman Alicia Dinkelmeyer and senior Mari Taslagyan. Captain Annika Ringblom and freshman Anna Li earned their 11th win as partners in a 6-3 decision in first doubles. Junior Isabel Jasper and sophomore Irene Lu won third doubles for the Crimson, 6-3.

In singles play, Oosterhout continued with her solid play and defeated Matador junior Skyla Alcon in two sets, 6-1, 6-0. Another player who stood out during this match was freshman Jenna Mostafa who beat junior Arpe Bagumyan, 6-0, in the third set of fifth singles.

On Friday March 16th, Harvard began playing UC Santa Barbara at their court in Goleta, California. The match was stopped twice because of rain before it was officially called.

For the time that the match was still being played, the Gauchos claimed the doubles point with wins in the second and third doubles. Before the singles competition was cancelled, sophomore Natasha Gonzalez was leading Lise Sentenac 3-2 in the second set after defeating her 6-3 in the first set. Oosterhout was also beating senior Palina Dubavets 3-1 in the second set before the rain got too strong.

“Rain delays are always tough. It’s hard to stay focused when you are constantly thinking about the weather and getting stopped,” Oosterhout said. “But I think everyone did a great job of dealing with that pressure. After our first delay everyone was ready to go and many of us were turning around our matches which is great to see.”

On Wednesday March 14, the Crimson played a close game against Gonzaga in a tournament hosted by California State University, Northridge. The Bulldogs took the lead early by winning the doubles point. The Bulldogs won the first and third doubles.

In singles play, Harvard put up a tough fight against Gonzaga. Sophomore Jenna Friedel picked up her tenth victory after dropping the first set, 0-6, to junior Graciela Rosas. Friedel responded by winning the next two sets, 7-6, 6-0 in second doubles. Ringblom picked up her 12th singles win with a two-set victory, 6-0, 6-2 in fourth singles. Also, sophomore Irene Lu won her singles match over junior Nevada Apollo in third singles. The win improved Lu’s singles record to 13-9.

“The first match against Gonzaga was our toughest,” Oosterhout said. “It was our first match outside and it is sometimes hard to adjust to the elements. It took us a little longer to get into a rhythm.”

The women’s tennis team shut out Providence in the second game on Saturday March 10. The Crimson won the doubles point with a 6-0 doubles win from Oosterhout and Gonzalez. Oosterhout also won her singles match, 6-0, 6-3, over Risa Takenaka. Ringblom blanked Aiden Epstein 6-0, 6-0 in third singles. Friedel won her match 6-1, 6-2 in second singles.

Harvard began its spring break on a very positive note, defeating the Red Foxes by a commanding margin. Harvard started off the game by winning the doubles point. The doubles teams of Ringblom and Li, Gonzalez and Moustafa, and Jasper and freshman Neha Gupta all won their matches to secure the point for the Crimson.

Harvard also dominated at the top of its singles lineup. Junior Erica Oosterhout improved her record to 13-2 by blanking Marist junior Chloe Lant 6-0, 6-0.

After a demanding week of play, the Crimson is set to host Quinnipiac on Sunday March 25 at the Murr Center Courts. This is Harvard’s last match before Ivy League play.

“As a team, we need to really focus in on what we struggled with individually this past week to contribute to the team as a whole in our match against Quinnipiac on Sunday,” Ringblom said. “I am positive that everyone on the team will be excited to get back onto the courts to work on our weaknesses before our ivy season on the horizon.”