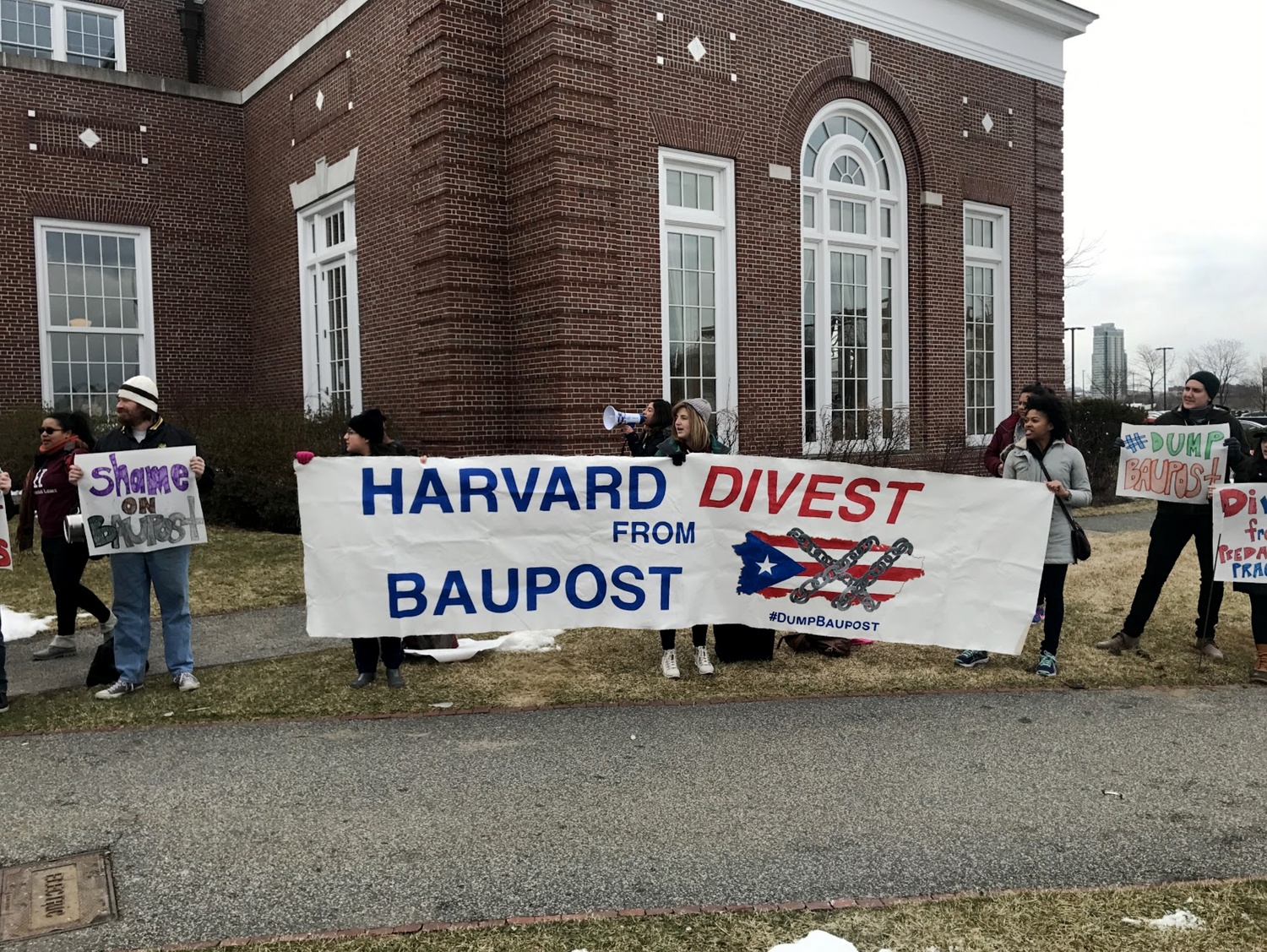 Around 20 Harvard affiliates protested the appearance of Seth A. Klarman—CEO of Baupost Group—at a Harvard Business School event Saturday morning, urging the University to divest from Baupost given its nearly $1 billion share in Puerto Rican bonds.

Klarman served a keynote speaker for the day-long Business School Investment Conference, which took place in Spangler Center. The ticketed event was hosted by the Investment Club, a Business School student organization. The Baupost Group is listed as one of the sponsors for the event.

At approximately 8:30 a.m., demonstrators attempted to enter the west side of Spangler, but security guards stopped them, arguing the protest would disrupt the conference.

One of the protestors, Agustin A. Rodriguez Lopez ’19, spoke to the gathering about his family’s experiences in the wake of Hurricanes Irma and Maria last September. The hurricanes, which struck within a period of two weeks, shut off 80 percent of the island’s power lines and left thousands without access to potable water.

“I was raised in Puerto Rico, I lived there my entire life. There is not anyone who I know who is not affected somehow by the situation,” Rodriguez Lopez said. “It’s hard to see the blue tarps set up by the engineer corps and not feel something.”

A spokesperson from Baupost group said Baupost has not purchased additional Puerto Rican debt since the hurricanes last September. In a letter to clients in Oct. 2017, Klarman wrote that “holders should be willing to accept a discount to par as part of a broader restructuring of the island’s excessive debt burden.”

“This is a terrible tragedy caused by a once in a lifetime storm and our first thoughts have consistently been with the people of the island,” Klarman wrote in an emailed statement in January.

Rhonda N. Shafei, a Harvard Business School student and the co-chair of the Investment Conference, declined to comment on the protest.

Joseph Quisol, a student at the Graduate School of Education, acknowledged the rally took place the same day as the March for Our Lives—a nation-wide, student-led protest aimed at curbing gun violence—but said the demonstration “stood in solidarity” with the separate, national event. Quisol said the goal of the march was “to get as many people as possible to know that our investment and our endowment is perpetuating colonialism and injustice.”

“If we don’t continue being vocal and putting pressure [on the University]... things don’t get done,” said Quisol.

Sarah E. Baver, a student at the Graduate School of Education, said she learned about the event through organizers.

“I wanted to come in solidarity,” she said. “As a Harvard student, I think it is critical to stand against injustice, to see the ways in which my own affiliation with the Ed School is connected to injustice that is certainly being perpetuated against Puerto Rican people.”