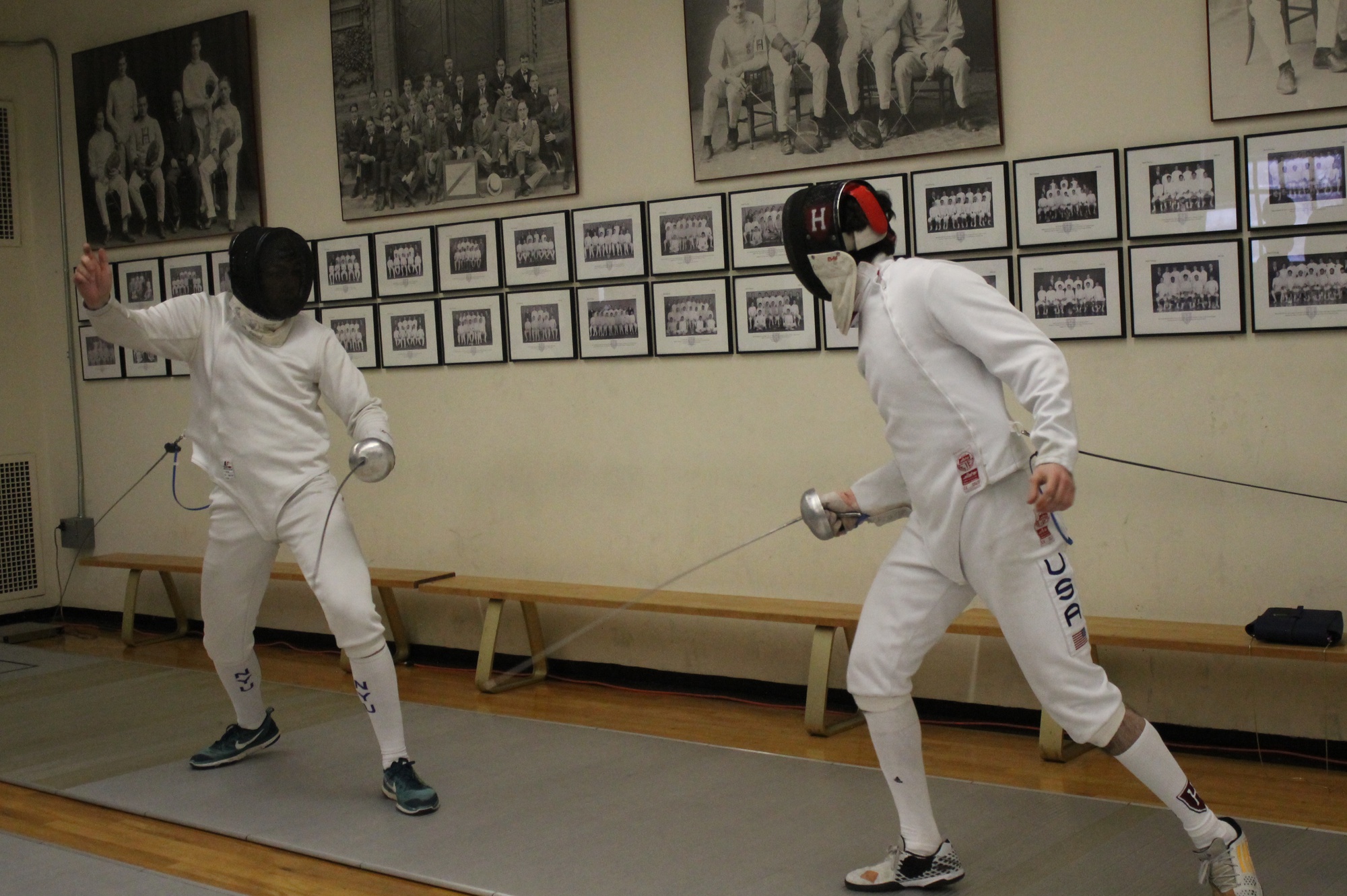 Freshman fencer Charles Horowitz was the only men’s competitor in epee for the Crimson, finishing 13th in the competition. By Kathryn S. Kuhar
By Kim Arango and Joseph W. Minatel, Crimson Staff Writers

“Overall the team had a really strong showing in the tournament this year,” junior Gabrielle Tartakovsky. “We were only a couple bout wins behind Penn State.”

The Crimson came into the NCAA Championships on a high note, with both Kukadia on the women’s team and Tourette on men’s team sweeping their fields to earn a gold medal each in epee and foil respectively at the 2018 NCAA Regional Tournament two weeks earlier at Brandeis University. The Manhasset, NY native won the epee category after posting a 17-6 record with a plus-36 touch differential. The Cupertino, CA native claimed the foil category with a 20-3 record and plus-66 touch differential.

“In general, the NCAA is a tournament requires a lot of psychological preparation,” Tartakovsky said. “You have a tournament with 24 of the top fencers i the country.”

On top of the two gold medals, Dershwitz came into the Championships looking to claim the men’s sabre crown for the second year in a row, with his first last year being Harvard’s first men’s individual title since 2007. The junior co-captain came into the Championships with a 47-6 record as well as claiming an individual championship title in the sabre category at the Ivy League Championships earlier this season. The Sherborn, MA, native battled his way in a 15-9 victory against Andrew Mackewicz of Penn State before defeating Ziad Elsissy of Wayne State in a nail biting 15-14 win.

Cai competed in his men’s sabre event at the NCAA Championships as a freshman to secure a 8th place finish during the Championships with 14 victories. In men’s foil, Haglund finished in 16th place. Horowitz, as the only Crimson competitor in men’s epee, to earn a 13th place finish.

On the women’s side of the events, Gao started off shaky, but was able to rebound.

“In the first round of the five-touch bouts, I really was not fencing well,” Gao said. “Those low scoring bouts are very uncommon.”

After making the semifinals, Gao ended up earning the top finish for Harvard with a third place finish in the epee category with 17 victories.

“I started loosening up and that helped me fence a lot better,” Gao said. “For the rest of the bouts I was beating people I had never beaten before. I was carrying that energy with me throughout the entire day.”

At the end of the NCAA Championships, Harvard finished as a team in 5th place with a total of 129 points and 865 touches scored, and walked away with an individual championship title thanks to Dershwitz as well as strong finishes on both the men’s and women’s teams.

The NCAA Championships conclude the season for the Harvard team, but not everyone has completed fencing on the year. Tourette, Cai, and Gao will be heading to the World Championships in Italy next week.

“NCCA is usually the end of the season for college fencers,” Gao said. “NCAA really prepared me for World this week.”

—Staff writer Kim Arango can be reached at kim.arango@thecrimson.com

—Staff writer Joseph W. Minatel can be reached at joseph.minatel@thecrimson.com