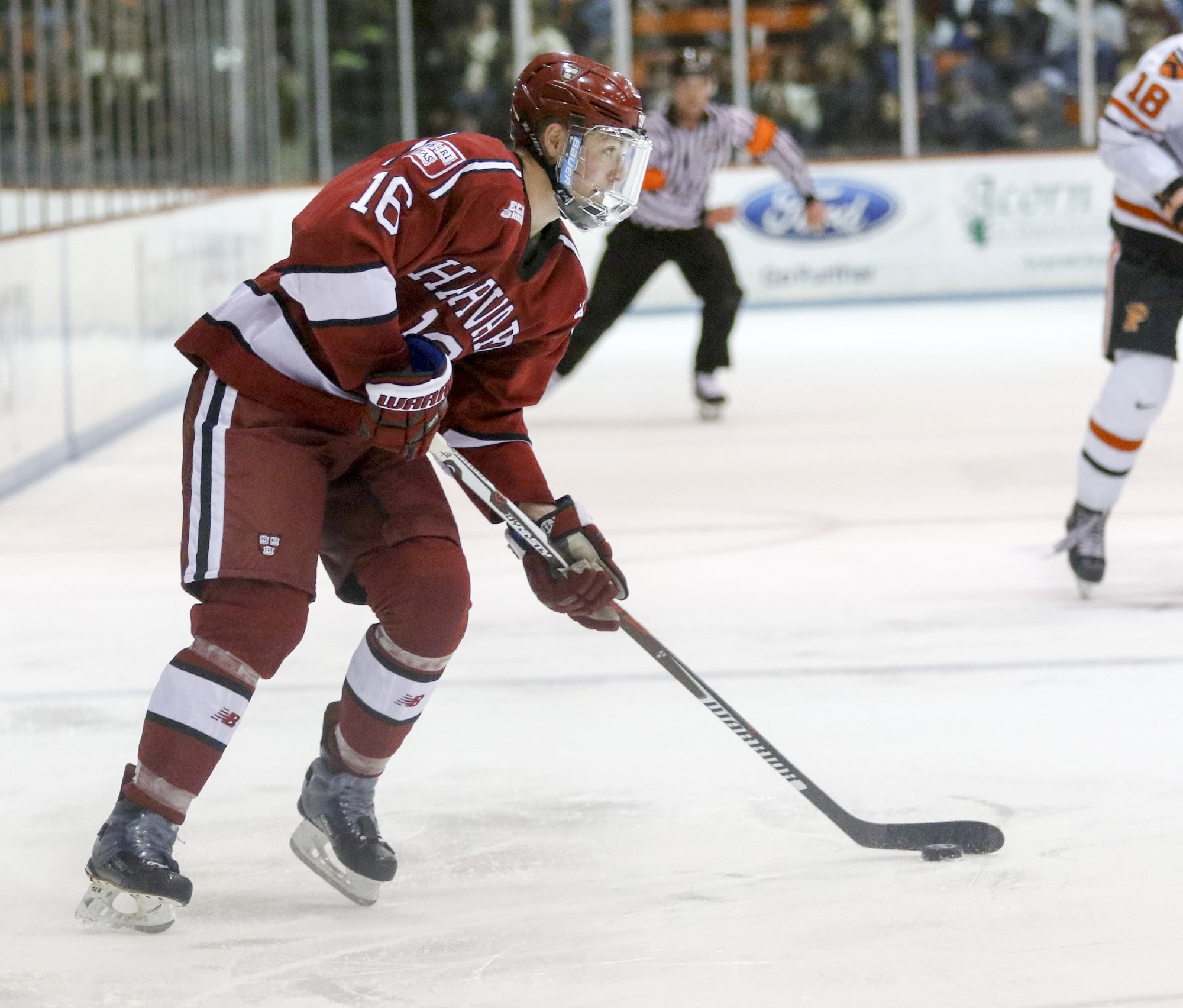 Donato rode a 14-game point streak from the season opener on Oct. 29 to Jan. 6 through one of the Crimson's longest road stretches.
By Stuti R. Telidevara, Crimson Staff Writer 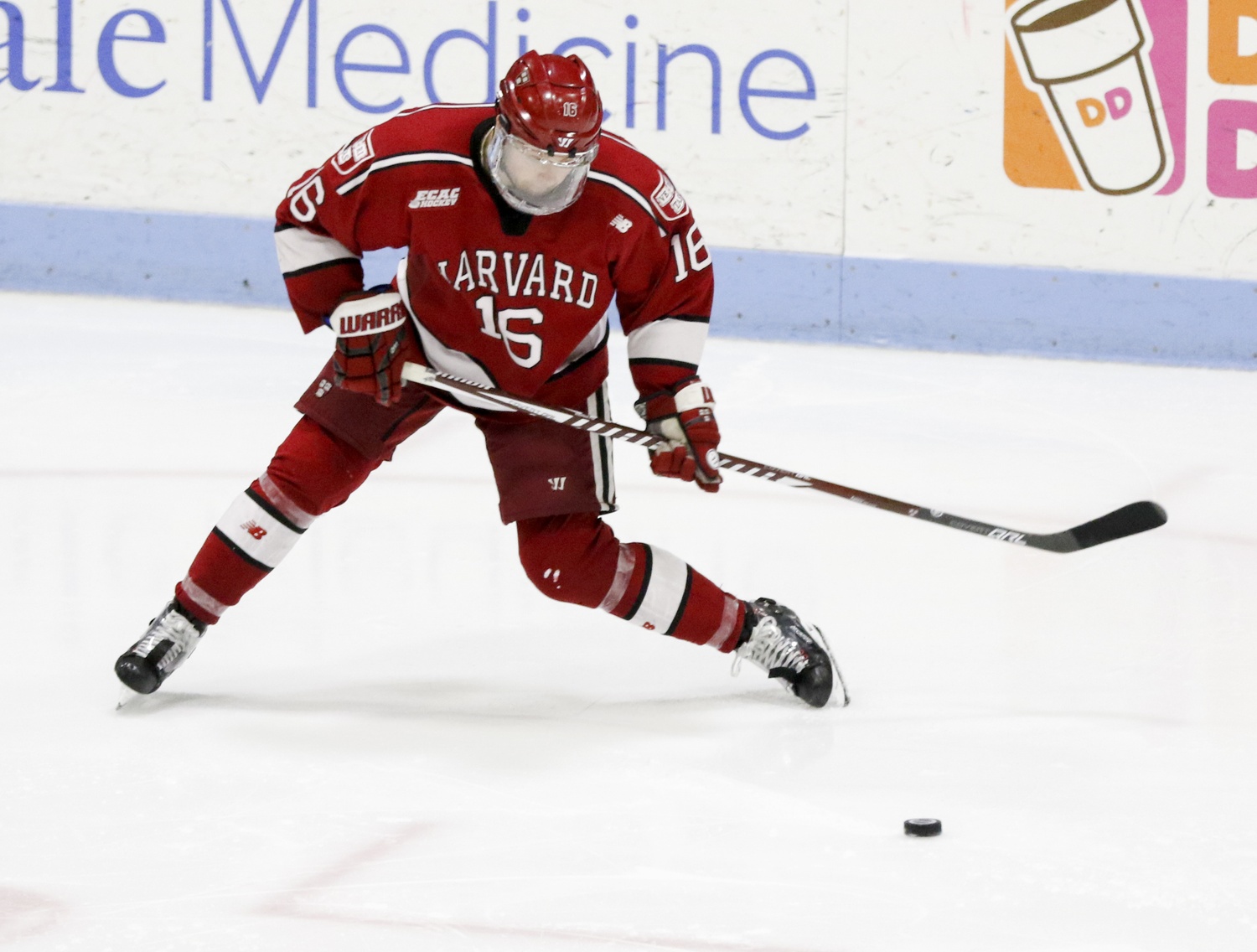 Donato's nomination marks the eighth time a Harvard player has been named to the top three. By Timothy R. O'Meara

Junior Ryan Donato might have closed the book on his time with the Harvard men’s hockey team, but he continues to earn NCAA accolades. On Thursday, Donato, now with the Boston Bruins of the National Hockey League, was named a top-three finalist for the Hobey Baker Memorial Award, given to the country’s top men’s college hockey player.

Donato stepped into the role of top-line center in the 2017-18 season, and fit in as the team’s top offensive piece. At the end of the regular season, Donato (29 GP, 26–17—43) led the Crimson in points and the NCAA in goals per game (0.90). The ECAC Player of the Year also traveled to Pyeongchang, South Korea, with the United States Olympic team, pacing the squad in goals (5 GP, 5–1—6).

Once Harvard’s season ended, Donato took his talents to the Boston Bruins, signing a two-year entry-level contract with the team that drafted him 56th overall in the 2014 NHL Entry Draft. Just days after the Crimson’s elimination, he suited up for the Bs, playing against the Columbus Blue Jackets on Mar. 19. Numerous Bruins injuries gave Donato the chance to debut on the team’s second line, and he made the most of the opportunity, scoring a goal and registering two helpers. In six games for his hometown team so far, Donato has notched three tallies and two assists. 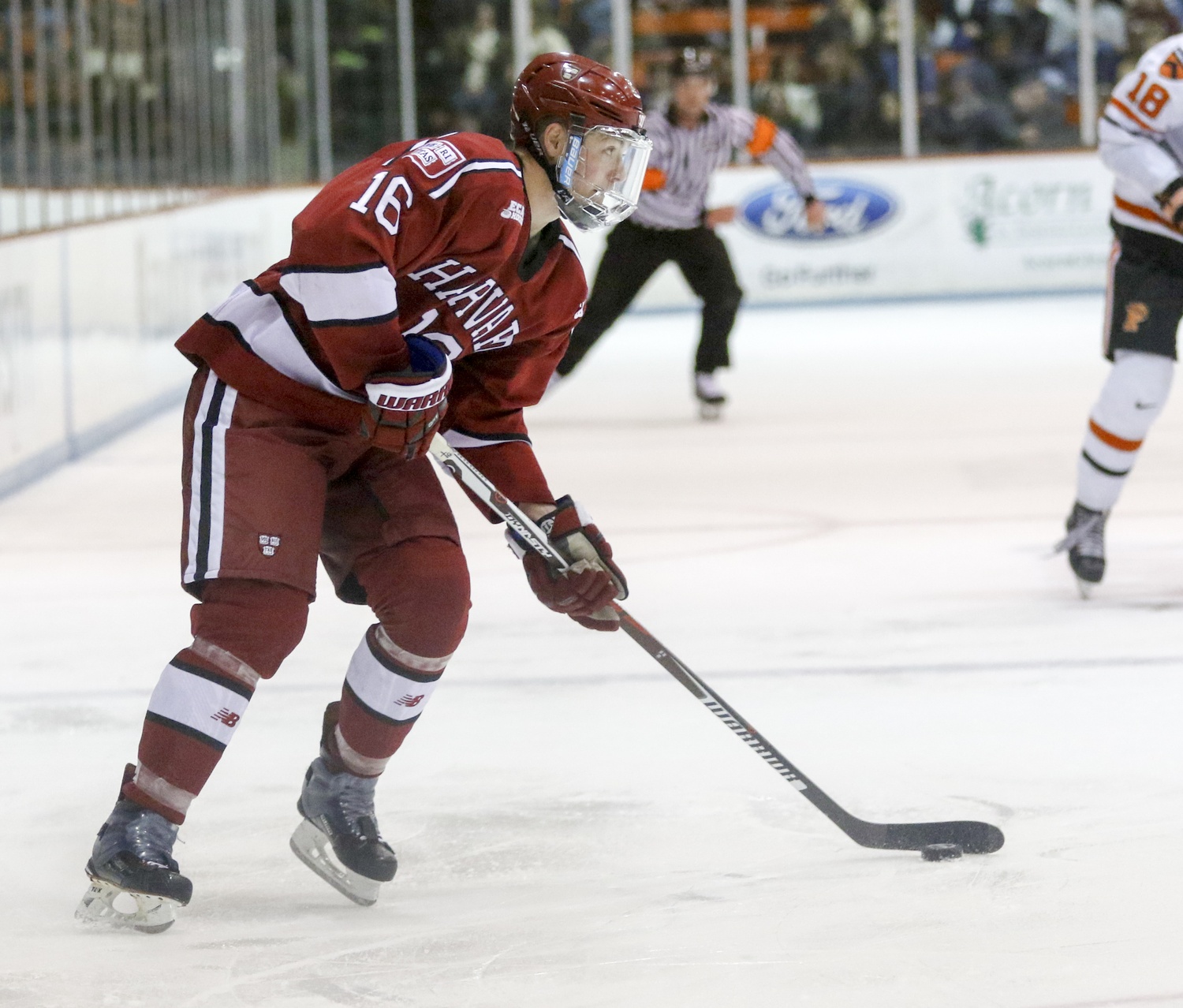 Donato rode a 14-game point streak from the season opener on Oct. 29 to Jan. 6 through one of the Crimson's longest road stretches. By Timothy R. O'Meara

When it comes to the three finalists, however, Donato is not the only one with an NHL contract. Both Denver’s Henrik Borgström (40 GP, 23–29—52) and Northeastern’s Adam Gaudette (38 GP, 30–30—60) have signed with pro teams, the Florida Panthers and Vancouver Canucks, respectively. However, neither has made his professional debut yet.

Gaudette, a junior, led the country in goals and netted a hat trick to power the Huskies to their first Beanpot championship in 30 years. He and Donato are both South Shore natives—Gaudette is from Braintree, while Donato calls Scituate home. Borgström, a sophomore and a native of Helsinki, Finland, led the National Collegiate Hockey Conference in points and was awarded the NCHC Player of the Year.

Donato is the fifth Harvard player to be named to the Hobey Hat Trick, as the group of finalists is called. Each of the four previous Crimson finalists won the award eventually, though it took multiple nominations for some. Harvard has seen a Hobey winner very recently—at the end of the 2015-16 season, former co-captain Jimmy Vesey ’16 capped off a memorable collegiate career with the award, winning it in his second year as a nominee.

Previous Crimson winners are Mark E. Fusco ’83, former captain Scott M. Fusco ’85-86, and former captain B. Lane MacDonald ’88-89. These four former players give Harvard the only ECAC school with Hobey Baker awardees, and only Minnesota-Duluth has more winners (5). Whether or not the Crimson will tie that record remains to be seen, as the Hobey Baker winner will be named on April 6 during the Frozen Four.