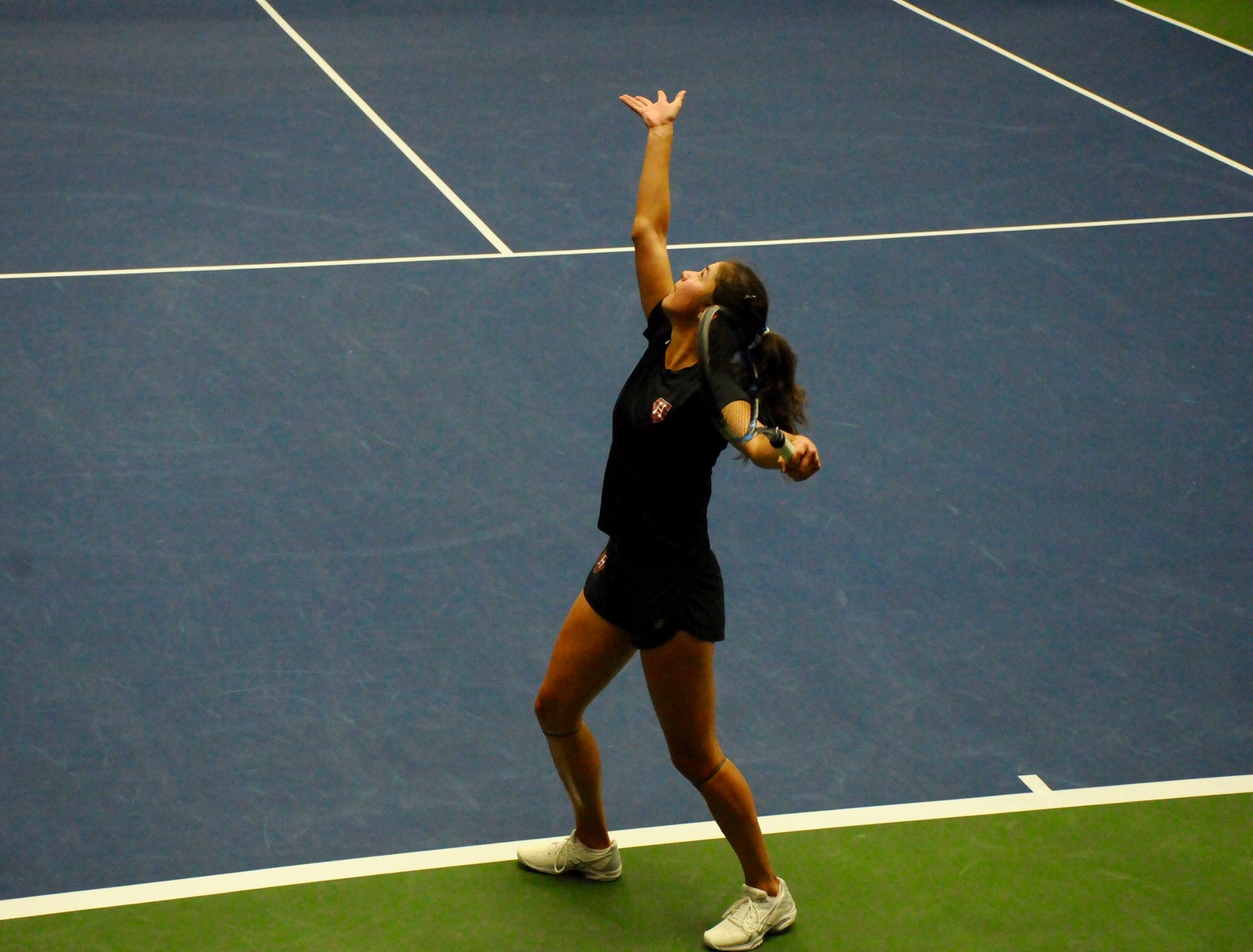 Harvard cruised to victory over its rivals Yale and Brown to remain undefeated in conference play. By Henry Zhu
By Ronni Cuccia, Contributing Writer

Staying hot in Ivy League contests, Harvard women’s tennis finished off the weekend with two wins to stay undefeated in league play. The resounding victories over Ancient Eight rivals prepared the team for its next two home matches against Columbia and Cornell this upcoming weekend.

The Crimson (11-8, 3-0) actually started out the match losing the first doubles point. Junior Erica Oosterhout and sophomore Natasha Gonzalez were the only pair to win a doubles match.

“It was great to see everyone come out ready to go in singles after we dropped the doubles point,” sophomore Jenna Friedel said. “Everyone was able to mentally turn the page and get after it from the start of singles.”

Both Harvard and Brown went into Friday off of victories in opening conference contests. As with Yale, the Crimson dropped the doubles point to Brown, but ended up winning the match by winning five out of the six singles points.

“I’m just so proud of our squad,” Harvard coach Traci Green said. “We came back after losing the doubles point. It didn’t look great out there for a very long time but we fought tooth and nail and came through today so I’m really proud of the resilience primarily but overall heart of our team.”

Oosterhout and Gonzalez performed well in doubles and was tied 5-5 with their Yale competition before the doubles point was determined. In singles play, Gonzalez had a stand out performance by clinching the win for the Crimson in her sixth singles match, a tightly contested matchup against the Bulldogs’ Juliana Simon. Gonzalez won the first set 6-4, but then Simon responded to win the next set 7-5. In the final set, Gonzalez solidified the win against Brown for the Crimson by defeating Simon 6-3.

“A lot of the matches went three sets which means it was a battle either way. Natasha really stepped up nicely again,” Green said. “It is the second time clinching in a row for us which is huge. She's only a sophomore so we expect more great things to come.”

Even though Harvard had already clinched the match, Oosterhout and sophomore Jenna Friedel continued impressive play for Harvard. Oosterhout defeated her opponent, Alyza Benotto in first singles (7-6, 4-6, 6-4). Friedel also had a standout performance in the match, defeating Brown’s Maddie Stearns in three sets (6-2, 1-6, 6-2) in second singles.

“And Erica she has been batting a few injured here and there and I’m really proud of the way she came through there in the end even when the match was already clinched,” Green said. “Annika as always had super energy out there and she gets the team fired up. Jenna Friedel she was a fighter out there totally, she came out with a fast start and got tripped up a little bit but turned it around in the third for us.”