Although the season ultimately ended with a loss, the defeat came at the highest competition in the club level: the national championship game.
The Crimson Classics finished their season as national runner-ups, beating Michigan and Princeton in the NCBBA Tournament before falling to Ohio State.By Courtesy of Shane O'Donaghue
By Eliel Ig-Izevbekhai

With multiple practices a week, games at Lavietes Pavilion, regional finals, and a national tournament, the schedule and experiences of Harvard Club Basketball this season may rival those of its varsity counterparts. Although the season ultimately ended with a loss, the defeat came at the highest competition in the club level: the national championship game.

The Harvard Classics Club Basketball team is as competitive as it is recreational. There is no paid coaching staff, players may occasionally miss practice, and games are not televised; however, this did not stop the team from commiting to a full season of basketball en route to a NCBBA National Championship berth this season. It is that commitment, the team says, that makes the well-oiled machine run.

“This is my fourth year on the team,” senior President and player Tommy Kelley said. “[Club Basketball] is the main thing I do on campus. I was excited to take the reigns and get involved with everything.”

Kelley’s job is a complicated one. He is in charge of finding non-recruited players with outstanding basketball skill and years of basketball experience. However, the team has found a unique way of doing so: scouting pick-up games at Harvard gyms.

“We just go to Hemenway, or we go to [Malkin],” Kelley said. “I think a big way we get new players on the team is…playing pickup. When we see a good player we ask them if they’re a freshman and if they are on a basketball team.”

To some, club basketball is the best of both worlds. Players are able to receive a herald education while still playing basketball at a high level.

“I, like a lot of other guys on the team, had a chance to play at Division III schools and ultimately decided you wanted to go to to Harvard for the academic portion,” sophomore Shane O’Donoghue said. “...A lot of us were still looking for that aspect of playing basketball competitively. That’s why we looked at the club basketball arena without the crazy commitment of a varsity sport.”

Others were warmed up to the idea by mutual friends and family.

“I had known Tommy [Kelley], our families know each other,“ sophomore Nate Hollenberg said. “So I reached out to him. My brother also went to Harvard, so he told me about the club basketball team, and I told a lot of the people I played pickup with the first couple weeks [of freshman year].”

However, the informal recruitment process may be the most relaxed portion of the year. After tryouts fill a deep roster of about 18 players, the team locks in for the demands of a competitive season. Every weekend culminates in a game with a regional college team, making this one of the more time consuming club sports available. 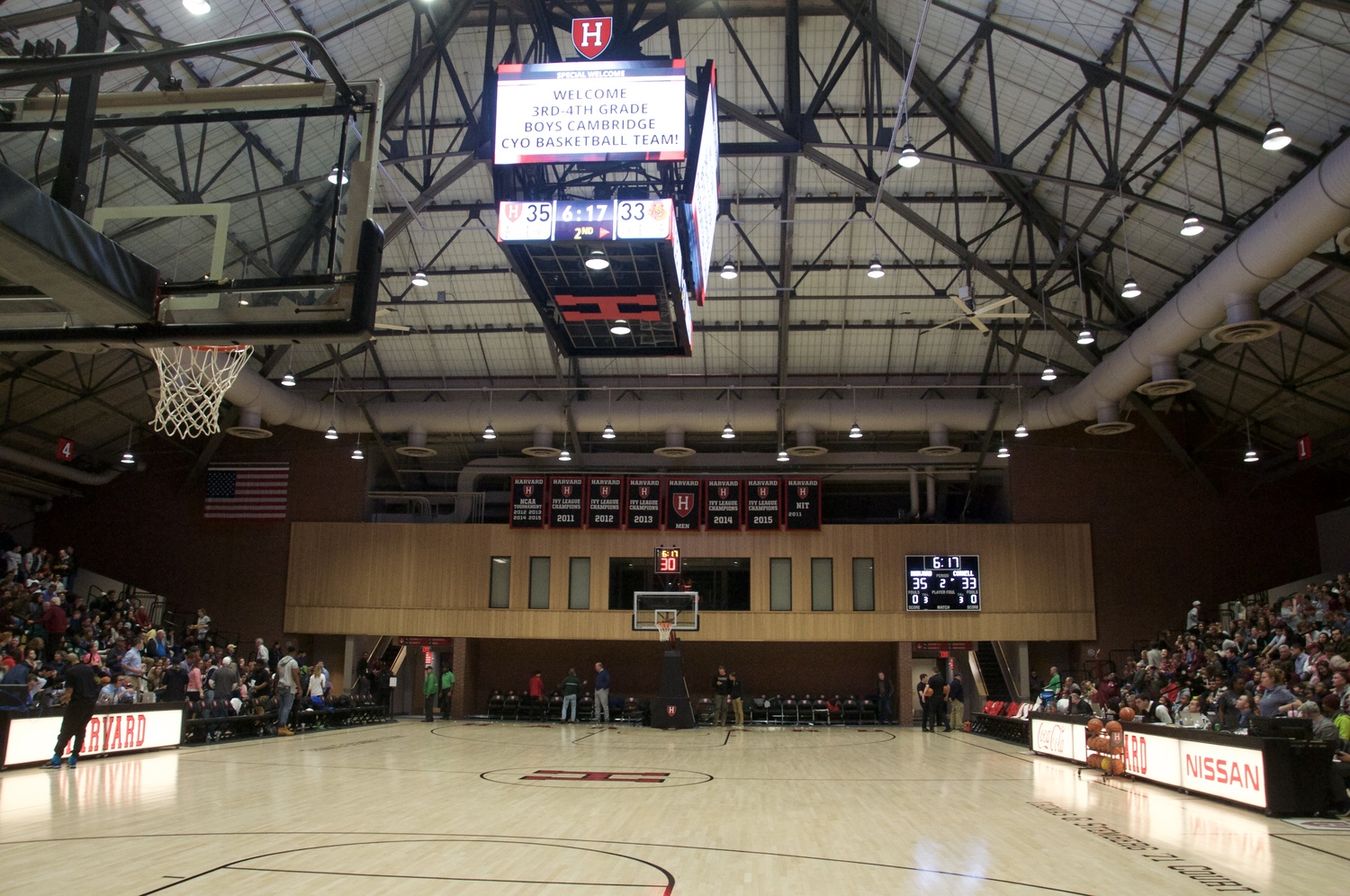 This does not mean the team isn’t understanding of the numerous time commitments of their players.

“What’s great about the Classics is that we always take a big squad,” Hollenberg said. “It's great because we...take it very seriously, but then again, a lot of the kids on the team do so many other things on the campus. Oh, you have to write a paper on Wednesday? We still have 12 other guys to practice. The seriousness combined with the understanding has made it a really great commitment.”

Every night of practice is devoted to making the team run smoothly. Kelley heads the team and helps implement game schemes while contributing as a team leader on the court, but every player also brings their own piece to the basketball puzzle.

“I do all the practice coordination, substitutions, all of that,” Kelley said. “I think there are a bunch of guys on the team that could have done it. It can be hard because these kids are your friends and you’re playing alongside them. At the same time, you need to take them out the game. Everyone has been very enthusiastic, however. If someone sees a play in a college or NBA game that they like, we try to put it in.”

Practice and gameplanning during the week can only go so far, and it makes the job even more complicated. The Classics sometimes face unfamiliar teams and aren’t afforded scouting that varsity sports receive. In-game adjustments are crucial in a league without game film or concrete rosters. The ability to adjust on the fly is another tool a team must have in order to succeed in this league.

Along with coaching and playing talent, the unique chemistry on and off the court is key to the team's success. The team’s ability to bond over the game each member loves has fostered a community of friendship and selflessness that translates to cohesiveness on the court.

“In every single grade, we have at least two people who are roommates with each other,” Kelley said. “It is definitely something that builds a lasting friendship.”

Between coaching, talent, and teamwork, the Classics ultimately put it all together in what was a season filled with numerous accomplishments. However, merely looking at the stat sheet and livestreams on Facebook would overlook everything behind the scenes that made this season come together.

It started with the players. The Classics immediately found new contributors to the team this fall, players that later became x-factors. The older leaders on the team were there to support them through the maturation process.

“Obviously the freshman this year played tremendously,” O'Donoghue said. “[Freshmen] like Paul Ramsey and Soren McLeod really came into their own, but it wasn’t always like that for them. We have some great senior captains. The senior leadership, those guys that rose up at the beginning of the season while the underclassmen were trying to find their role. It created a balance. Guys like Ramsey and Soren, the way they played in the national tournament when they played—unreal. It wasn't always like that. I accredit that to the leadership of guys that have been here for three or four years.”

Having all these tools was not enough. The Harvard Classics needed to win the New England Conference during the regular season, and defeat a familiar foe in Boston College. The season started out slowly, with losses to non-conference teams and lower-ranked matchups. As a result, the team did not picture themselves having late-season success during these early struggles. It took time into the second semester for the Classics to catch fire and streak into the regional tournament.

Boston College won an at-large bid to the regional tournament and had won two out of three of the previous matchups. However, the Classics put it all behind them, coming into the game with confidence in their newfound success and ultimately overwhelmed their cross-town rivals by over 20 points.

Next up was club basketball’s biggest stage: the NCBBA National Tournament. But the team hit another block on their path. With the tournament being a multiple day event in South Bend, Ind., the club sports budget could not cover such extensive travel and accommodations.

Carrying over their resilience from the court, the Classics were not deterred.

“We actually did a fundraising campaign,” Hollenberg said. “ We raised over $6,500 from friends and family...so it was really nice that we didn’t have to worry about anyone financially.”

On the biggest stage, each player also needed to find their role. Against the nation’s top teams, only selfless play would bring victory.

“For me, personally, it was ball handling,” O'Donoghue said. “When I get in the game, that is my main focus, just looking to help the team in a few minutes.”

The Classics were ready and had the players, support, and confidence. Immediately, it translated to success on the floor in the second annual tournament in South Bend.

Harvard overcame a deficit against familiar foe Princeton to squeak out a close victory, 90-89. With morale running high, the Classics then pulled the upset of the tournament. They overcame a double-digit deficit to best the #1 seeded Michigan Wolverines.

“We just said to just go out there and have fun,” Hollenberg said. “It just went our way.”

Next, for the national championship, was Ohio State. This game would prove to be the toughest test of all.

“I think at every position [Ohio State] had two inches on our next guy,” Kelley said. “We were missing our two tallest players so that was pretty tough.”

The Classics countered with spectacular individual performances. Multiple players stepped up and performed out of their roles to help lift the team up to the task.

“ I think a big part of why our run was so deep, especially lacking the big guys was Paul Ramsey and [senior] Fri Lavey,” Kelley said. “ They are two guys who are under 6’3” and had to step into a role of pretending they were 6’7”. It was just a huge performance.”

However, it was simply not enough. The Classics fell to another deficit early on in the contest, and again were able to recover. This time, however, after finding a lead in the second half, the team lost it. Ohio State came out on top 80-70.

The unfortunate loss was not as saddening to the team as one would imagine.

“What was really funny was [when] we got back in the locker room we were just joking,” Hollenberg said. “Morale was so high before; morale was still high. We went to Buffalo Wild Wings after and to be honest, if I walked in I would have thought that was the team that had just won the national title. It was a bummer that we lost... but we’ll be back. We were the last team standing.”

The Classics were pleased with the work that they had put in, their performance, and most of all, the support that they received throughout the year. Everything from their opportunities to play at Lavietes, the money they raised to enjoy a fun trip, and the support they received at home games and at the tournament made the season worthwhile.

“Our fan base could not have been better,” O’Donoghue said. “Club sports in general typically don’t get great fan showing, but this whole year everybody has been so supportive of the team. It made us feel like what we were doing had purpose. In the national tournament, the fan engagement was unreal. Parents of guys on the team, are writing and showing enthusiasm. College students were chirping the whole time, it was great to see.”

With a season to remember, the Classics are riding high. However, this does not mean they are finished in any way. The National Club Basketball Association is, according to their website, the fastest growing intercollegiate club basketball league in the United States. With increasing popularity, the Classics hope to continue to take their team to the next level.

“We can only go up from here,” Hollenberg said. “We hope to keep the mojo going.”