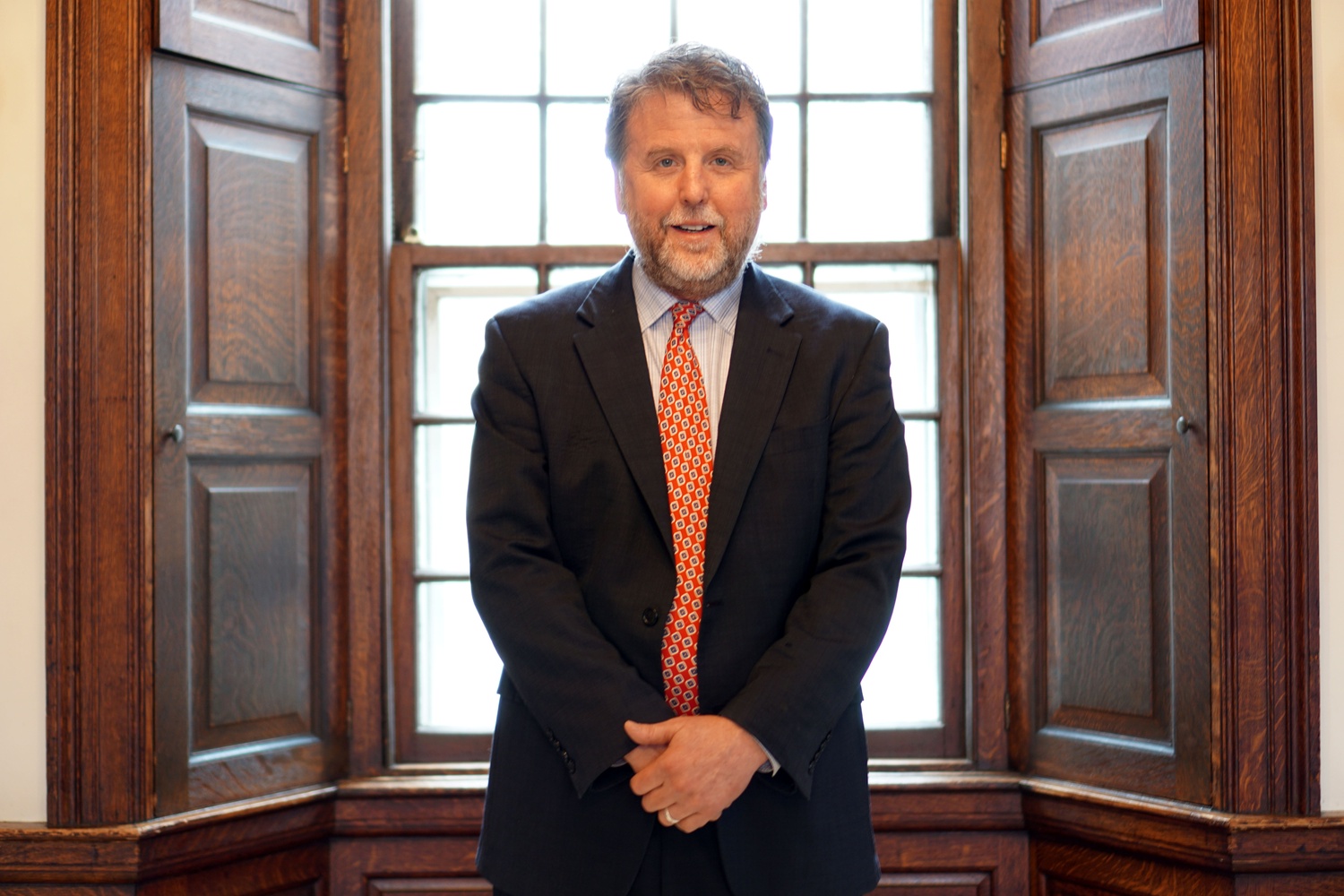 Gene Corbin, the current Assistant Dean of Harvard College for Public Service, will step down at the end of the semester. By Jacqueline S. Chea

Though the faces of the students who frequent the halls of Phillips Brooks House change each year, Assistant Dean of Harvard College for Public Service Gene A. Corbin, with his fist-bumps and friendly smile, has been a constant on campus for a generation of Harvard College students.

“I’ve been going to the same office for fifteen years,” Corbin said, laughing.

Corbin recently announced he will step down from his position May 4 after working six years as assistant dean. Before that, Corbin had served as the executive director of the Phillips Brooks House Association since June 2003.

In June, Corbin will begin a Ph.D. program in Higher Education at the University of Massachusetts Boston—a path he had never envisioned until he realized he wanted to continue work in higher education. Before he was PBHA’s executive director, Corbin studied public administration at the Harvard Kennedy School and worked with students as a teaching fellow.

The past 15 years, Corbin said, have felt “unreal.” As the semester—and his time at Harvard—comes to an end, “I just think about all the amazing people,” he said.

“The mission of Harvard College is to educate the citizens and citizen-leaders for our society.”

So reads the mission statement of the College. As such, one of the Phillips Brooks House’s focuses during his tenure, Corbin said, has comprised ensuring public service remains a priority for the student body.

While each of these offices operates autonomously, Corbin said collaboration between the trio has increased across the last few years.

“What we all do is really central to the mission of Harvard College,” Corbin said. “You have to be engaged in serving others and addressing social issues to learn to be a citizen and a citizen-leader, and that is what it means to come to Harvard College."

That desire to shine a spotlight on public service on Harvard’s campus led to the birth of the First-Year Day of Service in 2015. The daylong initiative, which involves both alumni and Phillips Brooks House staff, helps introduce freshmen to public service opportunities on campus early on in their college experience.

“Starting the year off with public service at the forefront sets the tone for people’s mindsets,” said Alysha L. Johnson ’14, the community relations fellow for CPIC.

Johnson said she has observed that careers in public service have become “easier to access” during her time at the College.

Kristin M. Garcia ’05, who served as president of PBHA around when Corbin started as PBHA executive director, said PBHA “has always prided itself on having a commitment to student leadership.”

During Garcia’s time at the College, PBHA—under Corbin’s leadership—pioneered a "Nonprofit Management Intensive" during Wintersession.

“That really gave students the skills to figure out what it means to lead a nonprofit,” she said.

Garcia added that Corbin’s “energy and creativity” supported students as they found their footing as student-leaders—and that today, he does the same exact thing.

“He always has his signature fist-bump whenever you see him in the building,” said Anwar Omeish ’19, the current president of PBHA.

“There are two different reasons to be in college. One is to get a credential that will allow you to make more income, and the other is to develop as a citizen and citizen-leader. And obviously there’s some overlap there,” Corbin said.

He added, though, that “I want to see the latter really become what it means to be a Harvard College student.”

Becoming a citizen-leader doesn’t always seem like a viable option to every student, according to Maribel Hernández Rivera ’04, who serves on the National Advisory Board for Public Service.

“You come to Harvard as an underprivileged student and suddenly feel the pressure of succeeding and doing better,” Hernández Rivera said. “I knew that I wanted to work with immigrants, but that was not something that I had seen as a path when I was in college.”

Efforts like the Public Interested Conference, which debuted in 2012, seek to expose undergraduates to different paths in public interest work.

“You don’t have to wait until your senior year to figure out what you want to do,” she said.

The network of alumni has been instrumental not only in the Public Interested Conference or the Public Service Recruiting Day—both of which began under Corbin’s tenure—but also in the Mindich Service Fellowship Program. That program matches students with public service organizations across the U.S., according to Travis A. Lovett, the director of CPIC.

“We’ve found that there really is a vibrant community here. It just takes being able to have enough resources to be able to bring folks together,” Lovett said.

Since the program’s launch, it has grown sizably, he said, and now sponsors 75 summer fellows.

“What’s great about this place is that it’s outlived anyone who’s here currently. As each person is here, they bring what’s special about them,” said Maria Dominguez Gray, the current executive director of PBHA. “But this place has a life of its own. It keeps going.”

“Gene has done a lot of work to make sure that there are structures in place that are beyond him,” she added.

A few weeks before the end of his tenure, Corbin looked back on the collaborative efforts that he has led and expressed optimism for the future.

“The role of people like me is to provide the support and structures that will allow the idealism of college students to flourish,” Corbin wrote in an email Wednesday.

“It will be exciting to see what others do, and I’m really proud of the progress that’s been made in the last 15 years and honored to have been a part of it.”