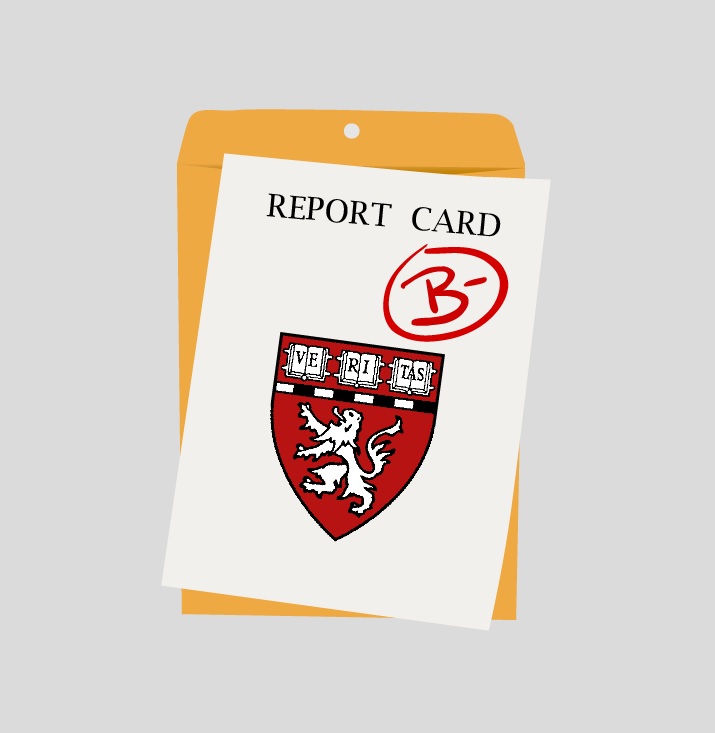 White Coats for Black Lives, a group that advocates for racial equality in medicine, gave Harvard Medical School a B- in its first-ever “racial justice” report card, released Wednesday.

The report card is meant to evaluate how well medical schools around the country—including Harvard’s—foster racial equality. In rationalizing Harvard’s grade, the organization pointed to minority underrepresentation among students and faculty, celebration of “racist/white supremacist individuals,” and a low rate of Medicaid patients at Harvard’s teaching hospitals.

The report card outlined the rationales and standards for each area; each of the 15 received a grade ranging from A to C. Harvard earned eight Bs and seven Cs overall, but did not receive an A in any of the areas.

In total, White Coats for Black Lives examined 10 American medical schools for its inaugural ratings. The most common grade, given to five schools including Harvard, was a B-. The highest grade awarded was a B, given to the University of Pittsburgh.

“Racism is a powerful force in American medicine. This is apparent in population-level health outcomes,” reads a press release announcing the report card.

“Medical schools and their affiliated hospitals receive massive amounts of public funding, provide care to millions of patients, and are often the largest employers in their regions. The Racial Justice Report Card seeks to encourage these powerful institutions to play an active role in fighting racism in medicine,” the press release continues.

Joan Y. Reede, the Medical School dean for diversity and community partnership, said she thinks the report card did not take all factors into account in an interview Wednesday.

“When you try to capture the nuances across all medical schools in short clips, you lose that,” she said.

Specifically, she pointed to the report card’s grade analysis of “disparities in medical students' grades or honors” between white students and students of color. The report states that it gave schools an A if there are no disparities, a B if the school tracks differences and has a plan to reduce them, and a C if there are significant gaps or if no data is publicly available.

Harvard received a C because the school does not make data publicly available. Reede said the data is not public because many of the Medical School’s classes are graded pass/fail—not because racial disparities exist.

In justifying the group’s assertion that the Medical School celebrates “racist” and “white supremacist” individuals, members of White Coats for Black Lives pointed in their report card to former dean of the Medical School Oliver Wendell Holmes.

The organization’s report also includes a set of recommendations for medical schools across all 15 metrics. The report suggests schools implement mandatory anti-racism trainings, publicize data about representation, and “dismantle their police and security forces” to reduce racial bias.

“Policing in the United States was established from slave patrols and continues to target and terrorize communities of color,” the report states. “Communities should have access to alternative systems of safety and justice that promote the well-being of people of color.”

“All of us at Harvard Medical School share their commitment to ensuring that students who identify as being from populations underrepresented in medicine are fully supported and equipped,” Daley wrote.

Daley also wrote he believes the Medical School has made progress in becoming more diverse.

“In recent years, HMS has made significant advances in this area. We acknowledge that there is far more work to be done, and we are unwavering in our commitment to our shared goals,” he wrote.

Shortly after becoming dean, Daley established a diversity task force, which released its diversity statement last October. Reede, who chairs the task force, said the group has formed six subcommittees, each of which will deliver their respective reports beginning this summer.

Last month, a University-wide diversity and inclusion task force released its final report, which made a set of eight specific recommendations for the University. The report also included statistics about faculty diversity on campus, revealing that the Medical School has the lowest percentage of underrepresented minority faculty across all of Harvard’s schools.

White Coats for Black Lives specifically mentioned faculty diversity in their report, giving Harvard a C for minority representation among students and faculty.

When asked about the low percentages of minority students and faculty at the Medical School, Daley and Reede both said the absolute number of minority faculty at the school is greater than the equivalent number at any other American medical school. Reede said the school has about 700 part- and full-time faculty who identify as underrepresented minorities.