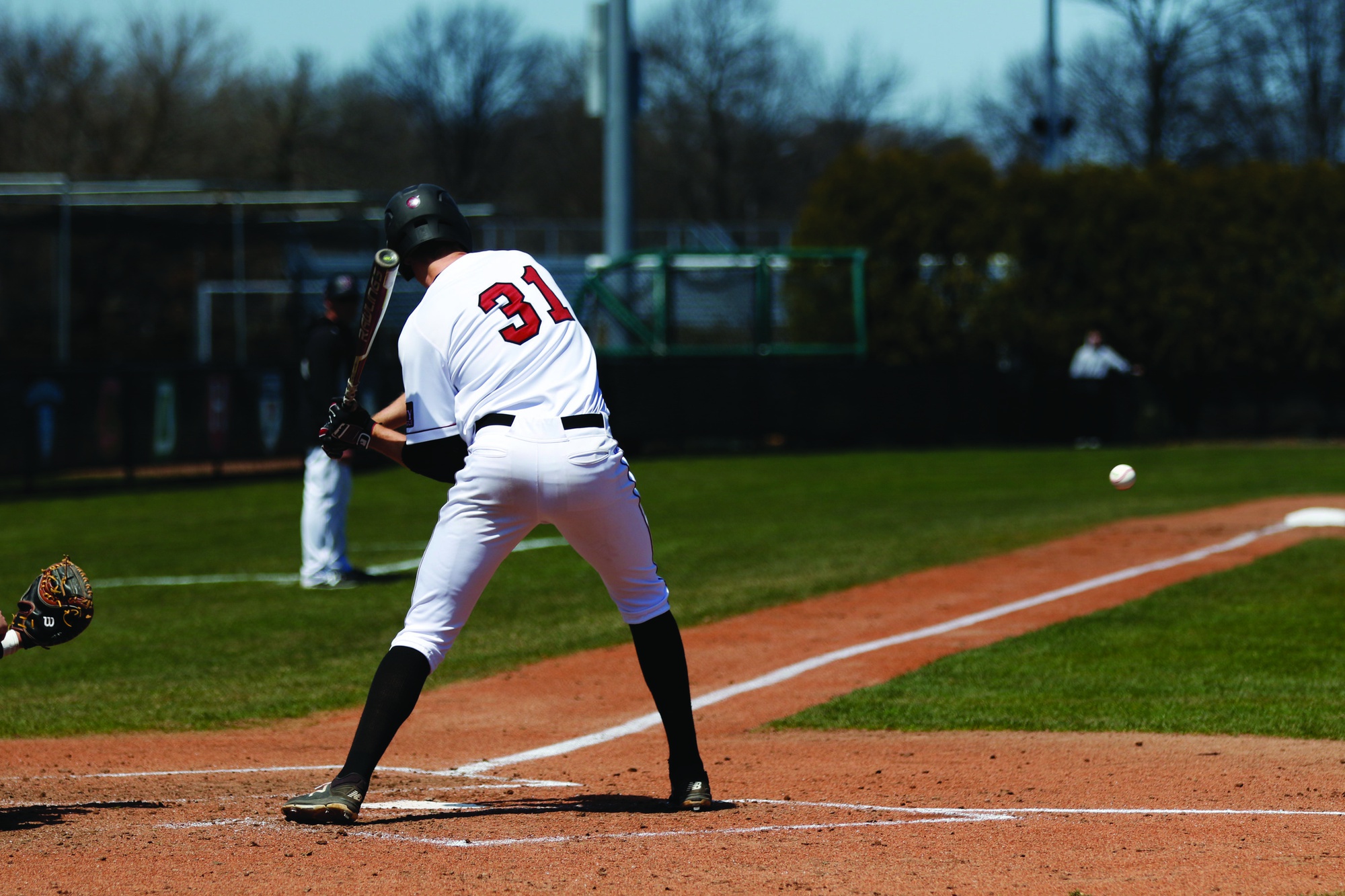 First Baseman Pat McColl and Harvard must swing for the fences and sweep the series to reach the postseason. By Timothy R. O'Meara
By Bryan Hu, Crimson Staff Writer

­One spot up for grabs. Three teams. One final regular-season series.

The 2018 Harvard baseball squad is the best Cambridge has seen in years—under its belt are a Beanpot title, wins over strong ACC and CAA teams, and a long-elusive overall record of, so far, over .500. But the season is on the verge of closing, after which the 2018 Crimson baseball team, for all its accolades, will be no more.

Before it moves on, though, the newfound Bad Boys of Boston look to add one more feather to its cap: an Ivy title.

A tense final weekend of regular-season Ancient Eight play looms for Columbia, Dartmouth, and Harvard, as all three will be vying for the chance to play in the 2018 Ivy League Championship Series, which pits the top two teams of the regular season in a title-deciding three-game set on May 19-20.

Yale, atop the table with a 14-4 conference record, are essentially guaranteed a spot. Dartmouth at 11-6-1, Columbia at 11-7, and the Crimson at 10-8 are locked in a three-team tango for second. Cornell sits fifth at 8-10 and is mathematically eliminated.

In conjunction with Columbia taking on Cornell on Saturday and Sunday, the two series will decide who plays on in 2018 to the championship series and who hangs ‘em up.

“We knew we had a really talented group coming in[to the year],” junior center fielder Ben Skinner said. “The expectation was to win an Ivy League championship this year, and we’re currently in a spot where we have a chance to do that.”

Here’s what would need to happen for each team to clinch a spot in the Championship series:

The red-hot Bulldogs are close to being guaranteed a spot. The only way Yale doesn’t get in is exactly thus:

The tiebreaking procedure for Yale and Columbia, both hypothetically sitting at 14-7, goes the way of Columbia. Notably, the Lions beat the Bulldogs 2-1 in their head-to-head regular season series.

Dartmouth would then play Columbia for the title and Yale would be left on the outside looking in.

All the Bulldogs have to do is win just one game to clinch a spot. Literally everything would have to happen exactly as described above for things to go wrong for the defending Ivy champions.

As long as it wins at least as many games as Columbia does this weekend, without getting swept by the Crimson, Dartmouth will be in.

Trouble looms for the Big Green if it loses all three, as then Harvard would surpass Dartmouth and the Big Green would be eliminated.

Columbia has been in second place for most of the season, but the Crimson’s and the Big Green’s late-season rise have the Lions sitting on edge. Columbia will thus look to regain control of the second slot with a good series against Cornell in Ithaca, N.Y.

There are a multitude of scenarios in which Columbia gets in, but the gist is that it needs to win at least two of three against the Big Red and get a little help from the baseball gods along the way.

In other words (assuming Yale takes care of business and clinches):

If Dartmouth sweeps Harvard, Columbia is out.

If Dartmouth takes one of three or gets swept, Columbia needs to win at least two of three.

If Columbia can only muster one win against the Big Red, it’s automatically eliminated.

The Crimson can keep it simple stupid.

The only path to a Championship series berth is to sweep Dartmouth and hope that Columbia wins no more than one against Cornell.

Anything less than a sweep of the Big Green means that Harvard’s 2018 season, the best it has had in more than a decade, is over, and that the Crimson’s first Ivy title since 2005 will have to wait another year.

“Coming into the year, there was a different feel [than in the past],” junior first baseman Pat McColl said. “We had a lot of talent and we had the chance to be good. Coming in, we definitely had those expectations. It’s always good to be playing for something the last weekend.”

O’Donnell Field, under a forecast of cool, partly-cloudy, rain-free weather, will be the site of Harvard’s most important series of the year on Sunday and Monday.

After a long two-week break for final exams, the Crimson will head back out to the for a crucial three-game set with Dartmouth.

Harvard hopes that the friendly confines can will the Crimson to a three-game sweep of the Big Green—Harvard is 4-2 at home and Dartmouth is 5-16-1 away from Hanover, N.H.

On the other hand, the Big Green is likely the second-hottest team in the conference. Dartmouth is on a five-game win streak and has won six of its last seven.

Moreover, the way the Big Green has dispatched of its opponents of late is downright scary—it routed Middlebury, 12-1, on Wednesday, and outscored Princeton by a combined score of 36-6 over a three-game sweep last weekend.

“We know, coming in, that Dartmouth is going to be a good team,” McColl said. “So we’ll be ready.”

The Crimson, on the other hand, has been good, but not that overpowering. Harvard is coming off an error-filled series loss against Cornell and a sweep against Princeton in the last two weeks.

Importantly, the team has had an extended chance to catch its breath after a flurry of games to end April. The Crimson looks to use the extended two-week rest to put on a good showing as it tries to qualify for the Championship series.

“Game one’s always really important,” said Skinner of the keys to the series. “We’re focused on the first one right now…we want to come out strong.”

To try and slow Dartmouth, Harvard will likely tab its best two pitchers to start the first two games—senior righty Noah Zavolas, who threw a no-hitter earlier this season, and junior righty Simon Rosenblum-Larson, a strikeout machine on the mound. 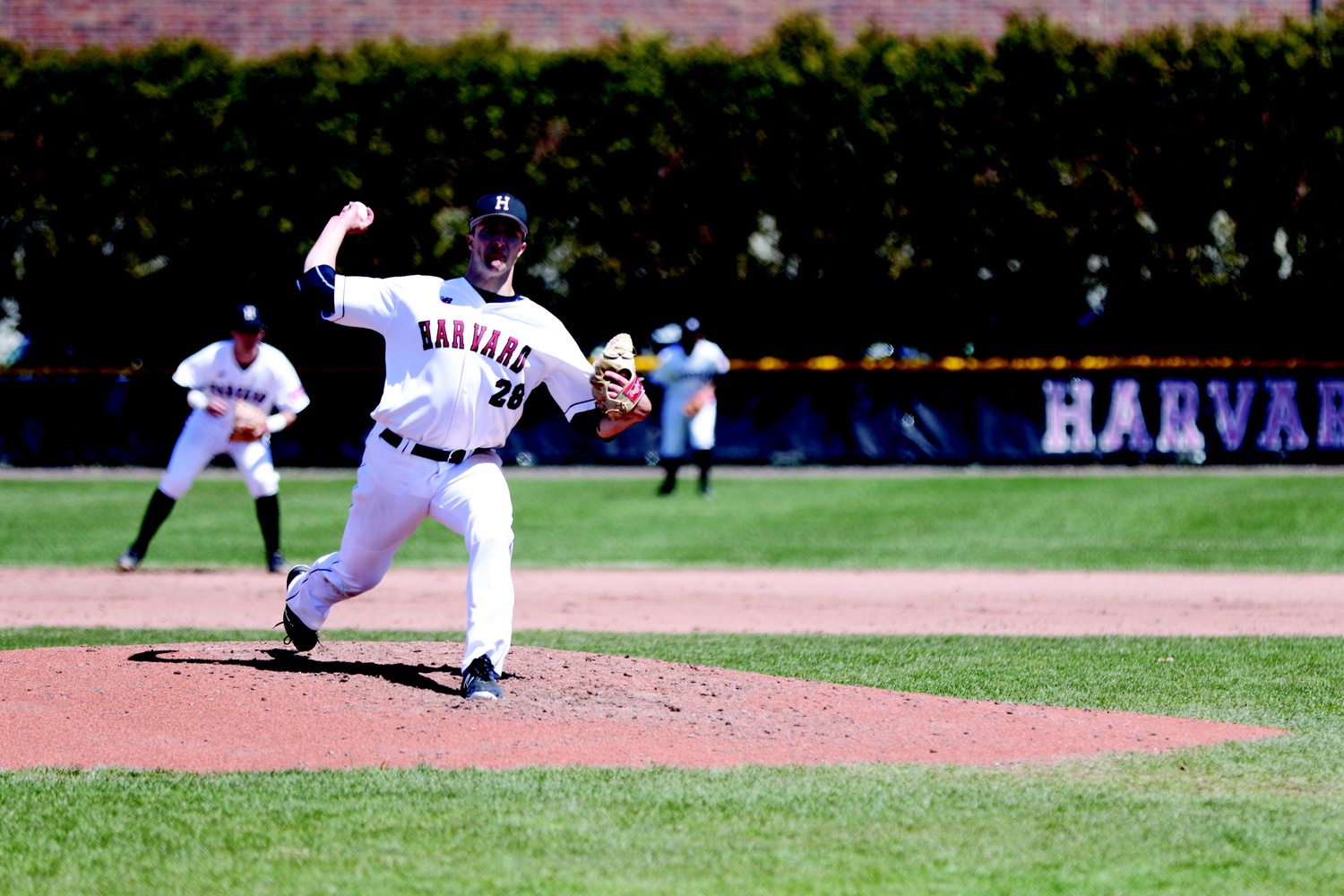 Nolan Zavolas will take the mound once last time during the regular season before walking the stage in a couple of weeks. By Timothy R. O'Meara

The Crimson pitching staff will look to limit a Dartmouth offense spearheaded by junior Sean Sullivan and sophomore Blake Crossing, who lead the team with .320+ batting averages and .435+ on-base percentages.

Moreover, just behind them lurk senior Dustin Shirley and sophomore Michael Calamari, sluggers who’ve hit a combined nine homers on the year and sport .430+ slugging percentages. The duo has also driven in a combined 53 runs.

Harvard’s usual suspects on offense, however, match up just as well on the stat sheet.

McColl and junior outfielder P.J. Robinson have combined for 60 RBI. Robinson, in particular, leads all players in the series with a meaty .487 SLG%. He also joins junior Skinner as the only Crimson players with an OBP% of over .400.

Senior Matt Rothenberg, potentially playing in his final games in a Harvard jersey, caught fire awhile ago, hitting an 11-for-20 hot streak before going 2-for-11 in Ithaca.

“We’ve got some nice weather and a chance to see the boys get a couple W’s,” Skinner said. “We would love to see a lot of students out there [at O’Donnell Field]. We’ve got a pretty big fanbase…we’re expecting standing-room only.”

“It’ll be nice being at home,” McColl said. “The weather has finally flipped, so this’ll be one of the best weekends. We have an all-grass field, so it definitely benefits us.”