Centuries old, the Museum of Comparative Zoology collections have accumulated diverse specimens from research expeditions, hunters, zoos, and even the voyage of Captain Cook.
By Paul D. Tamburro and Leon K. Yang 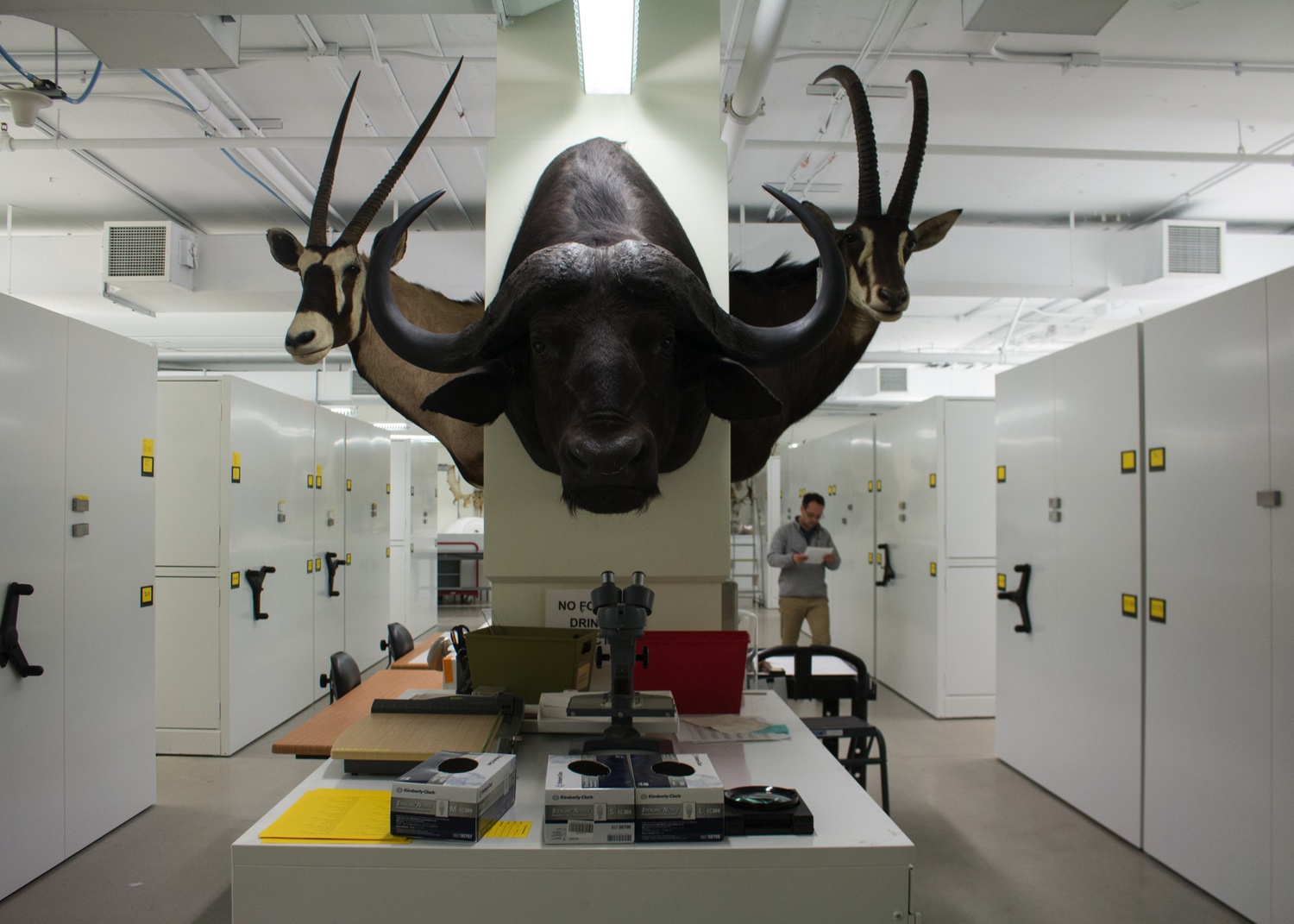 The Museum of Comparative Zoology preserves millions of specimens as part of the largest university-based natural history museum in the world. By Caleb D. Schwartz

Buried beneath “Northwest Labs,” stored in rows of sliding white compartments and secure cabinets, lie millions of mollusks, thousands of birds, and even a platypus.

These specimens are part of the collection of the Museum of Comparative Zoology, which contains more than 21 million specimens, making it the largest university-based natural history museum, according to James Hanken, MCZ director and curator of herpetology.

Centuries old, the Museum of Comparative Zoology collections have accumulated diverse specimens from research expeditions, hunters, zoos, and even the voyage of Captain Cook. Today, the collection spans 10 research collections across buildings on and off Harvard’s campus, including a defunct missile site which currently houses whale skeletons and flesh-eating beetles.

The museum serves a dual role for both the scientific community and the broader public. Many specimens are on display at the Museum of Natural History and help to educate a wider audience. Yet the extensive collections also attract researchers from other institutions and countries, who use the collections to study everything from concussions to nano-structures.

“Our collections are historically and scientifically very important so we have people from around the world who want to look at our material,” Hanken said.

Famous naturalist Louis Agassiz founded the museum in 1859, with the hope of creating a repository of specimens on par with European natural history museums.

“He had very grand ambitions. He was trained in Europe and was familiar with the great natural history museums in Europe, and he envisioned that we would be that for the United States,” Hanken said.

In the early days of the museum, professional collectors brought specimens from around the world back to the museum.

Speaking about the ornithology collections, Scott V. Edwards ’86, a professor of Organismic and Evolutionary Biology and ornithology curator, said, “Most of our specimens, the big bulk of them came in the late 19th century, early 20th century, and in many cases we were buying collections from professional collectors.”

These professional collectors generally brought back whatever they could find.

“A hundred years ago, or even 75 years ago, museums would send out these expeditions that would kind of sweep up the forest floor and bring back tremendous large numbers of specimens of all kinds,” Hanken said.

Edwards said most of the specimens today are acquired through research projects throughout the world. Hanken explained that these modern research projects and collection practices are more targeted to specific species and more conscious of conservation.

“There’s a much richer conservation ethic and knowledge these days of endangered species and the threats to the environment and we’re very sensitive of that,” he said. “And in fact a lot of our people are leaders in conservation, so I would say it’s targeted collecting, that is ethically defensible and doesn’t threaten existing natural populations.”

However, a small fraction of the museum’s collections have more unique origins.

“The division of wildlife will give us specimens,” said Mark D. Omura, a curatorial assistant in the mammal collection. “We can get specimens just from regular people that find an animal.”

The museum also occasionally acquires specimens from zoos when the animals are less represented in the museum’s collections, according to Hanken. 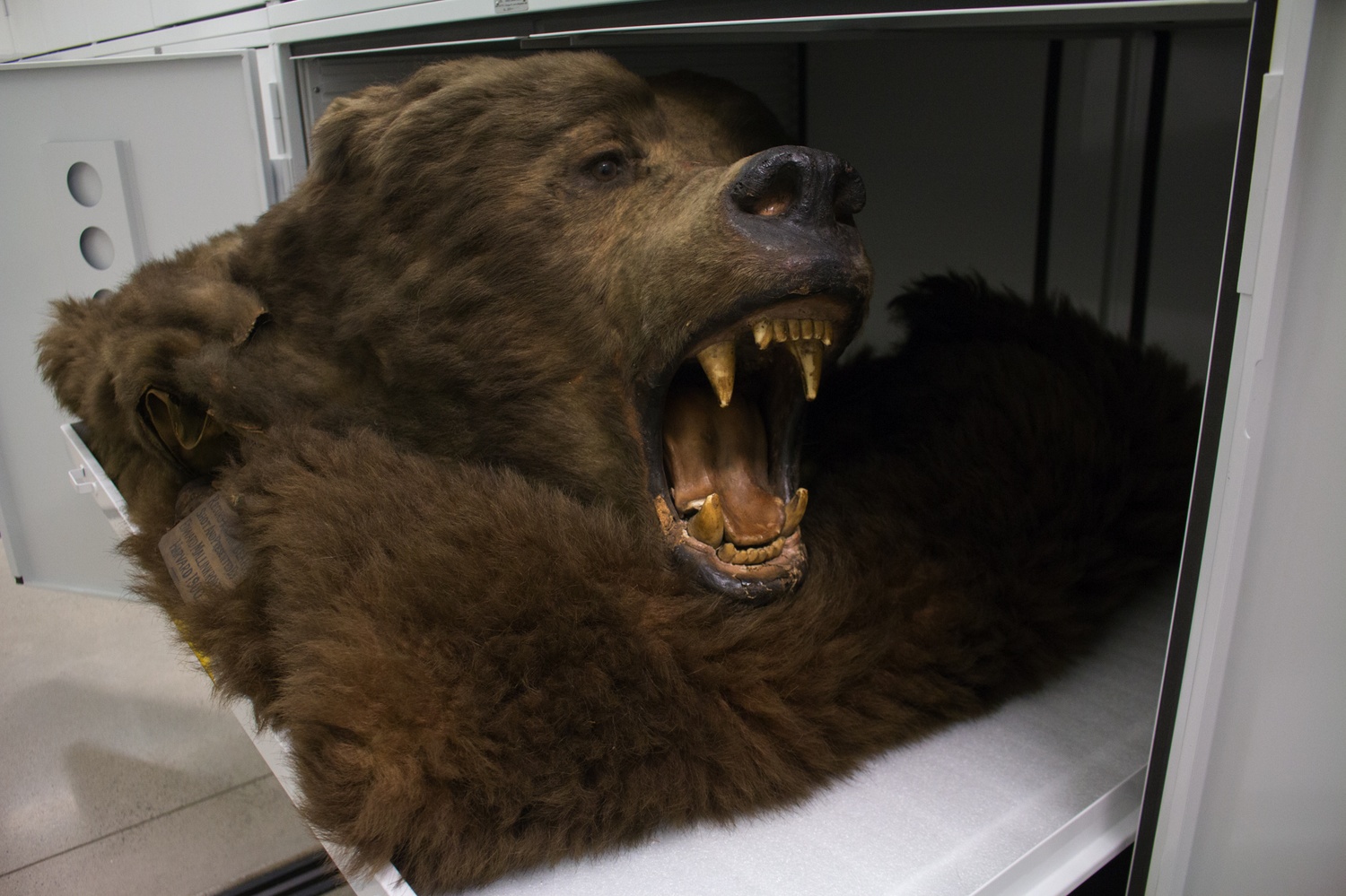 In exceptional instances when information about the animal’s origins is carefully recorded, the museum may also accept donations from retired hunters.

“There’s one collector, J.C. Phillips, and he is part of the family that founded Phillips Academy,” said Omura.“It seems that he was a hunter of some sort, and so he actually donated a lot of specimens to us.”

Boston-born hunter Ernest J. Milani also donated more than 10 of his hunting trophies from Africa to the museum, according to Omura.

Other parts of the collection date back centuries. Many of the approximately 400,000 birds in the Ornithology Department—the fifth-largest in the world—come from the 18th and 19th centuries.

The immense number of species require special care and conservation. Occasionally, pests and diseases can affect the collections, though this has posed less of a problem since a number of the collections moved from the MCZ building on Oxford Street to the new storage facility in Northwest Labs.

Harvard also maintains an off-site facility in Bedford, Mass., where the museum stores its larger specimens and “skeletizes” some of the specimens. The Concord Field Station, located at a defunct Nike missile site, is the holding site for marine mammal specimens, such as whales.

Biology professor Andrew A. Biewener, who studies animal physiology and the mechanisms of of movement using X-ray video technology, bases his lab out of the Concord Field Station.

“So basically through the ’70s, as long as Harvard had and operated the facility as Concord Field Station, we never knew there were missiles on site until about six years ago,” Biewener said. “We saw this aerial jpeg that showed that there were in fact missiles there for the two to three year period that the [missile site] was in operation.”

The station also features a dermestidae beetle colony. These beetles are used to prepare skeleton models.

“You would take a specimen and you would remove the skin and then put the skeleton in with the beetles that remove a lot of the flesh,” said Hopi E. Hoekstra, curator of the mammal collection and professor of zoology. “Then you would do the final cleaning of the bones, and then each bone gets labeled with a specimen number, which is a painstaking process as you can imagine.”

In addition to preparing the specimens for preservation and storage, curators also must deal with the organizations challenges that come with working with collections as large as that of the MCZ.

Adam J. Baldinger, a collection manager in the malacology department which focuses on mollusks, said the millions of specimens in the collection necessitate thorough cataloguing, which has recently been shifting towards a digital platform.

“If a researcher inquires about our collection and we can’t find it, it’s a problem,” Baldinger said. “So maintaining order in a collection like this is the important thing, but for dried shells, it’s maintaining humidity, temperature, light exposure, dust exposure but also insects, so insects will eat labels, and the specimens are not that good for us if we don’t know where they were collected, who collected them, and when, and so forth.”

In order to facilitate student access to specimens, the MCZ has also developed an online database, called “MCZbase,” where students can search through the collections, though, some collections are not fully digitized yet.

'MEANT TO BE USED'

All the collections of the MCZ are open to researchers both at the University and beyond. Researchers coming from a range of fields, including anthropology, history, and art, take advantage of this resource. Occasionally, the museum will also loan out parts of its collections to other institutions.

Baldinger noted that a team of Russian researchers plans on visiting the malacology department to study a specific species of freshwater mollusk. He also said that visitors to the collections include artists and those interested in the history of science.

“To see that researcher come and be able to look at something they’ve never seen, or they’re excited because it’s very important for their research, to me, that’s the really satisfying thing,” he said. 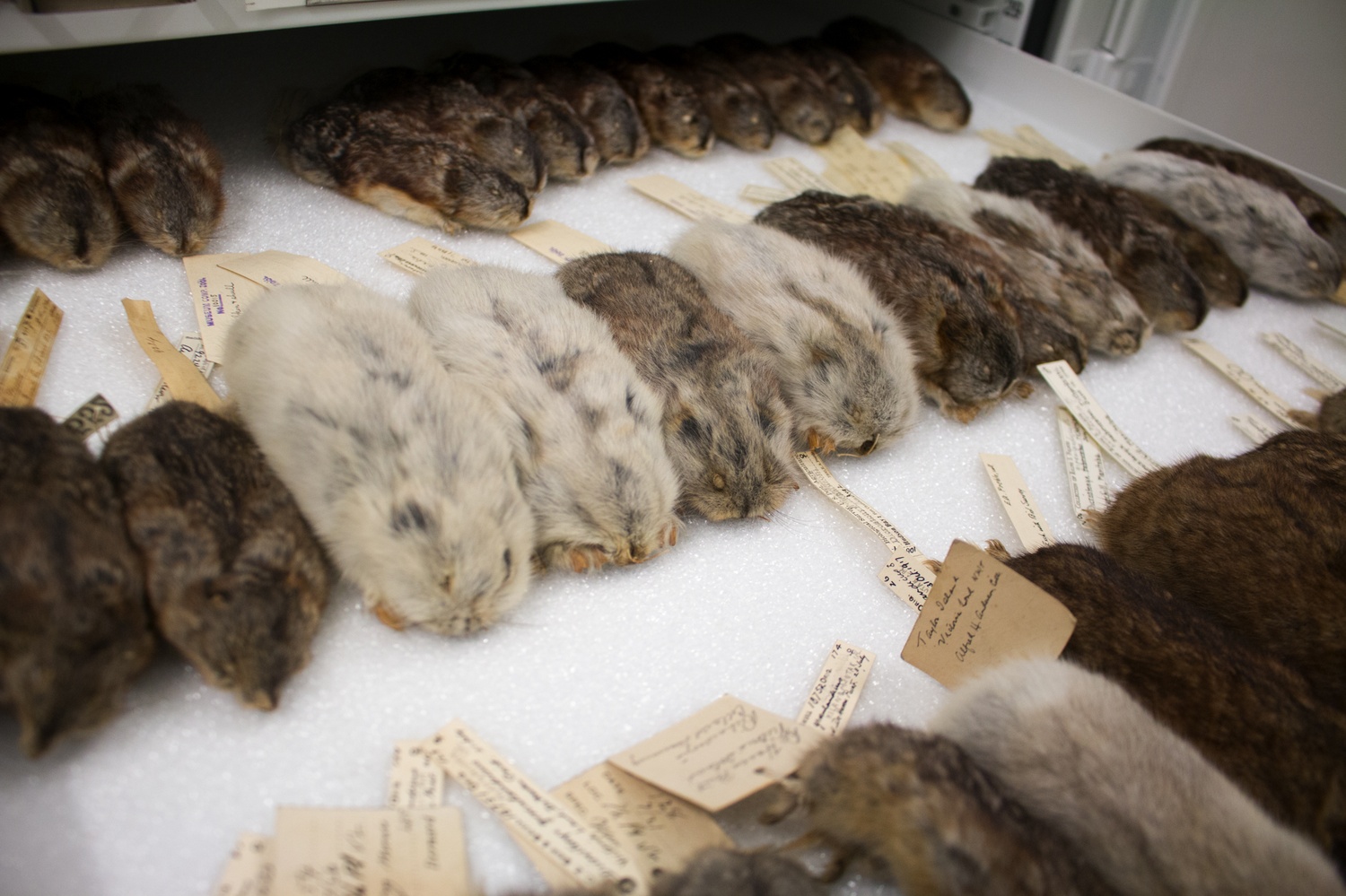 Most researchers using the mammal collections are interested in using the primate specimens in their studies of human evolution, Omura said. Edwards emphasized the possibility of interdisciplinary use of the collections for research extending beyond evolutionary biology, phylogeny, or anatomy, though. He specifically said he wishes more chemists and physicists applied the collections to their own work.

“We’ve had people looking at woodpecker skulls to study the effects of repeated pounding and to help design better football helmets and things like that,” Edwards said.

He also added, “There’s a lot of interest these days in some of the nanostructures that make up feathers and how they produce interesting colors. So we’re getting a lot interest from physicists in these biomaterials and optical properties.”

The long time-range of the collections also makes them useful for researchers studying evolution and climate change, according to Hoekstra.

“We have samples through time, so the museum is becoming more and more important in the sense we’re learning new ways to use the specimens,” she said. “So for example, we already talked about getting DNA from old specimens, so you can look at genetic changes through time.”

Other research projects led by the MCZ include 3-D scanning and printing specimens and using cryogenically frozen tissue samples for DNA sequencing.

Nina Morales ’18, who received one of these grants and currently takes Organismic and Evolutionary Biology 190: “Biology and Diversity of Birds,” said she was impressed by the variety of the ornithology collection.

“You’ll see these really, really small hummingbirds, they’re really delicate, super iridescent and beautiful,” Morales said. “Then on the other end of the table, you’ll have an enormous black-backed gull, and you just have those two sitting on the table at the same time which is really exciting.”

Morales suggested students take classes related to zoology to gain more insight into the collections of the MCZ. She also recommended taking trips to the Harvard Museum of Natural History, which has an abundance of species on display.

“It’s a tremendous resource that we’re really, really lucky to have,” Morales said. “Since our museum is super extensive and people have been collecting for a long time, students are really able to see how the collections have changed over time.”

Selena J. Zhao ’20, who is pursuing a secondary field in Organismic and Evolutionary Biology, volunteers in the collections.

“I think it’s just a really fun way to destress and stay in touch with my interest in OEB while I’m not taking classes in it,” Zhao said.

Zhao added that the collections offer a unique opportunity to see rare species up close.

“There’s just so many animals that you feel like you would never be able to touch their pelts cause like, they’re alive, but yeah there’s an entire bear skin, there’s snow leopard pelts, lion pelts,” Zhao said.

“We’ve loaned specimens to students,” Hoekstra said. “Recently there was some manatee day, we gave a manatee skull to a group of students.”

Looking ahead, Edwards said he hopes more students will take advantage of the MCZ collections.

“I think we have some amazing stuff here at Harvard, and students shouldn’t think, well, I don’t think it’s really for me,” Edwards said. “Any time a student wants to come in, look at stuff, we encourage it. These are very valuable and we of course would show you how to handle them without compromising them, but they’re meant to be used.”