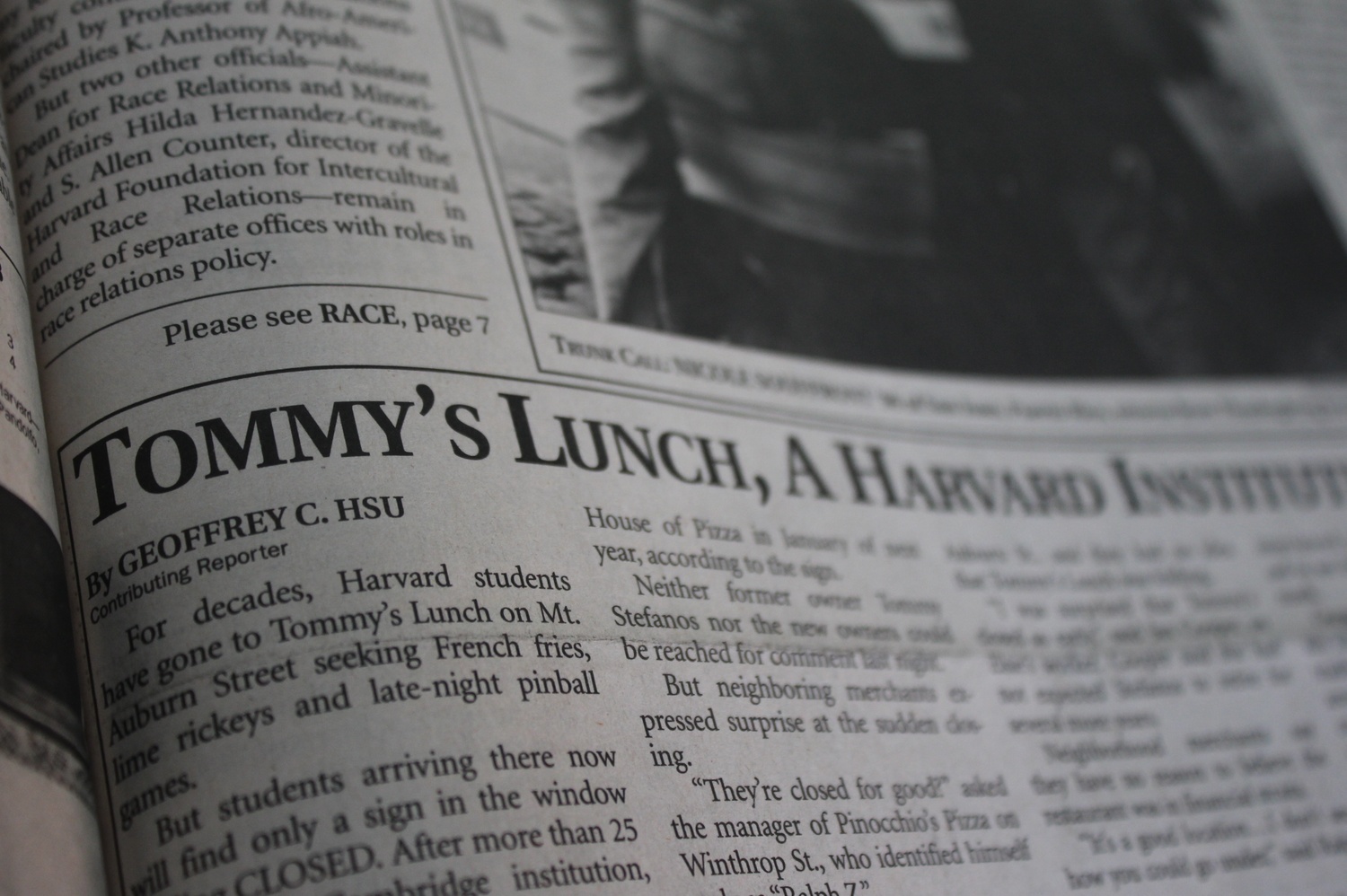 A 1992 Crimson article announces the closing of Tommy's Lunch, a restaurant popular with undergraduates. By Kathryn S. Kuhar

From 1958 to 1992, Tommy’s Lunch served greasy late-night food to generations of Harvard students.

The 49 Mt. Auburn Street institution was a favorite hangout spot for Crimson and Lampoon editors, residents of nearby Adams and Quincy house, and an assortment of Cantabrigians.

Students could stop by for cheesesteak sandwiches, raspberry lime rickeys, and french fries, all served until 3 a.m. Owner Thomas Stephanian, known for his boisterous nature and penchant for cigars, was a Harvard Square fixture for 34 years—right up until he was “just plain tuckered out” from running the restaurant.

The restaurant’s sudden closure in Nov. 1992 shocked loyal customers and fellow Square merchants. Few were expecting the restaurant to shutter its doors, much less with a simple CLOSED sign and no formal announcement.

The “Harvard Institution,” as The Crimson’s Editorial Board dubbed it, received a full obituary in the paper.

When Stephanian opened Tommy’s Lunch in 1958, the restaurant only had two tables. The business expanded into a neighboring laundromat in 1971.

At the height of its popularity, Tommy’s was decked out with red booths, a pinball machine, a jukebox, and the latest video games—at the time, Asteroids and Pac-Man. Students flocked to the late-night joint for study breaks and post-party antics. 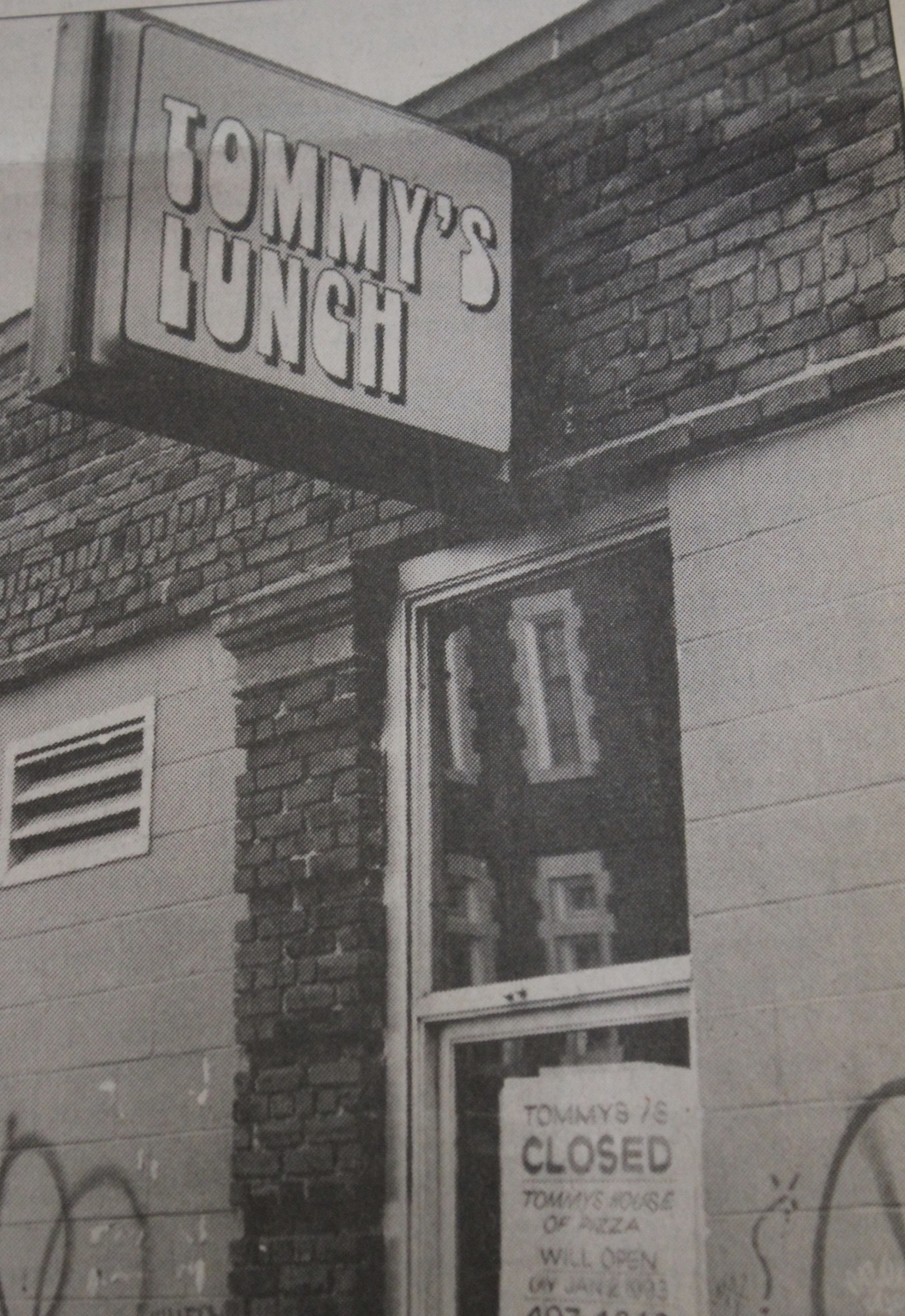 Tommy's Lunch was a popular restaurant among undergraduates. By Kathryn S. Kuhar

Peter G. Whang ’95, who lived across the street at Quincy house, said Tommy’s Lunch was a go-to place for him.

Ellen O. Carr ‘94 recalled that she had a standing date with her freshman roommate at 10:30 p.m. to grab a coffee at Tommy’s. Carr said the luncheonette attracted people from all over Harvard’s campus.

“[It was] a melting pot of Harvard people, I met lots of people I wouldn’t have met otherwise,” Carr said.

Karin B. Braverman ‘94, who lived in nearby Claverly Hall in Adams House, said the atmosphere was always friendly.

“You could always just show up and find someone to talk to, even the staff,” she said.

Others recalled a particular kind of tough love between Stephanian and the students who patronized his business. A Crimson article about the restaurant’s closure fondly noted the “surly service with a scowl.”

'Rough on the Edges'

Tommy’s staff were known for their lighthearted treatment of their customers. Raffi S. Bezjian, who started working at Tommy’s when he was 14 and stayed there for the next eight years, said the experience was thrilling.

“For me as a 14-year-old, it was very exciting to work at a place like Tommy’s Lunch… all these writers, musicians, some are huge today. Was very fun, even though it was chaotic, history was chaotic,” Bezjian said.

Bezjian noted that plenty of students who went on to become famous made the pilgrimage to Tommy’s, including Pink Martini frontman Thomas M. Lauderdale ’92. 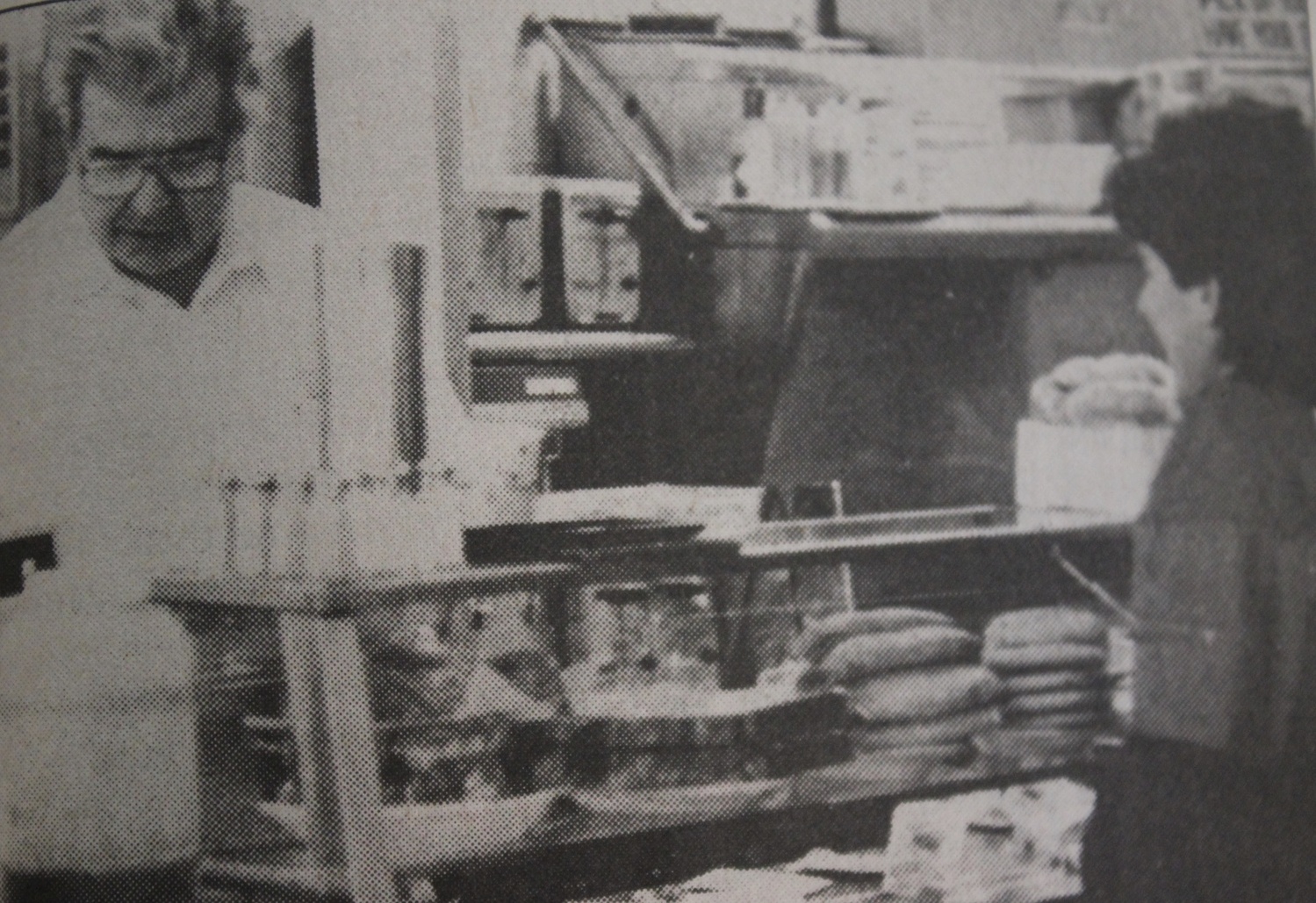 Bezjian said Stephanian, who passed away in 2011, was “a character.”

“He was rough on the edges but he had a soft spot,” Bezjian said. “When students didn’t show up to work, Tommy was very mad. If he had to tell you something, he didn’t care about who was around.”

Bezjian recounted how Stephanian once called in repairmen to fix his video game machines. When Stephanian learned the machines were broken because they were too chock-full with money, he called the video game company and asked for more games.

“His mind wanders all over the place,” Bezjian said. “[He was] very savvy.”

“He always had a quick retort every time he got some grief,” Whang said, adding he had “nothing but fond memories” of Stephanian.

Across its many years serving late night munchies, the restaurant also saw its fair share of tumult.

In May 1980, a group of white men threatened to beat up a gay Harvard student and his friends in the restaurant. A black Harvard student stood up for the students, and a fight broke out, with Tommy’s employees and an Adams House tutor coming to the students’ defense. The white men shouted racist epithets at the students, but the scene quieted down when Cambridge police arrived.

In Nov. 1992, shortly before the restaurant closed, Tommy’s was evacuated after someone phoned in a bomb threat late one night. At the time, Stephanian told The Crimson he had received “at least 40” similar calls in his time at the helm of the restaurant.

"I've been here 40 years—and if I had to worry about every little thing I've seen, guys running through here naked, guys threatening to shoot if I didn't open the door," Stephanian said at the time.

Stephanian stayed the course at 49 Mt. Auburn Street for 34 years, but after he closed up shop, the place changed owners—and names—frequently.

After the the building transferred hands to new owner Richard Vernon—and after a month-long delay—Tommy’s House of Pizza opened in Feb. 1993. The menu changed and so did the decor (though the pinball machine and the videogames stayed the same).

Vernon modernized the space with mirrored walls and chrome. Gone were the famous Raspberry lime rickeys. In came pizza. The greasy luncheonette got a bit cleaner.

“It was a different vibe,” she said.

Braverman, though, kept patronizing Tommy’s after the first change in ownership. She said the staff were still friendly. She recalled one time Tommy’s Pizza employees helped her remove a stuck ring by plunging her hand into the grease box.

A year later, the restaurant again changed hands. Michael T. McHale, a primary shareholder in the group that purchased the pizza restaurant, told The Crimson in 1994 he planned to bring changes to the menu.

"We're looking to give the Harvard students bigger portions, tastier food, wider variety, and, most of all, healthier food," he said at the time.

McHale brought in calzones and a signature sesame seed crust pizza. The restaurant finally ditched the crust in 2004—the sesame seeds were too challenging to clean up.

In 2001, when the restaurant yet again transferred to a new owner, the City of Cambridge withdrew the permit that allowed the business to stay open until 3 a.m.. Then-owner Mian Iftikhar told the Crimson that Tommy’s Pizza sales dropped 15 percent the year after the change.

In 2006, 49 Mt. Auburn St. finally lost the “Tommy’s” name. Tommy’s instead became the latest installment in the Unique Pizza and Subs franchise, with a revamped menu and decor.

The building was rechristened until 2008, this time to an upscale bistro called Trata. The new restaurant was not particularly popular among students.

In 2012, a pair of brothers, Lawrence and Brendan Hopkins, who also own nearby bar Daedalus, revamped the property into The Boathouse, a pub and grill.