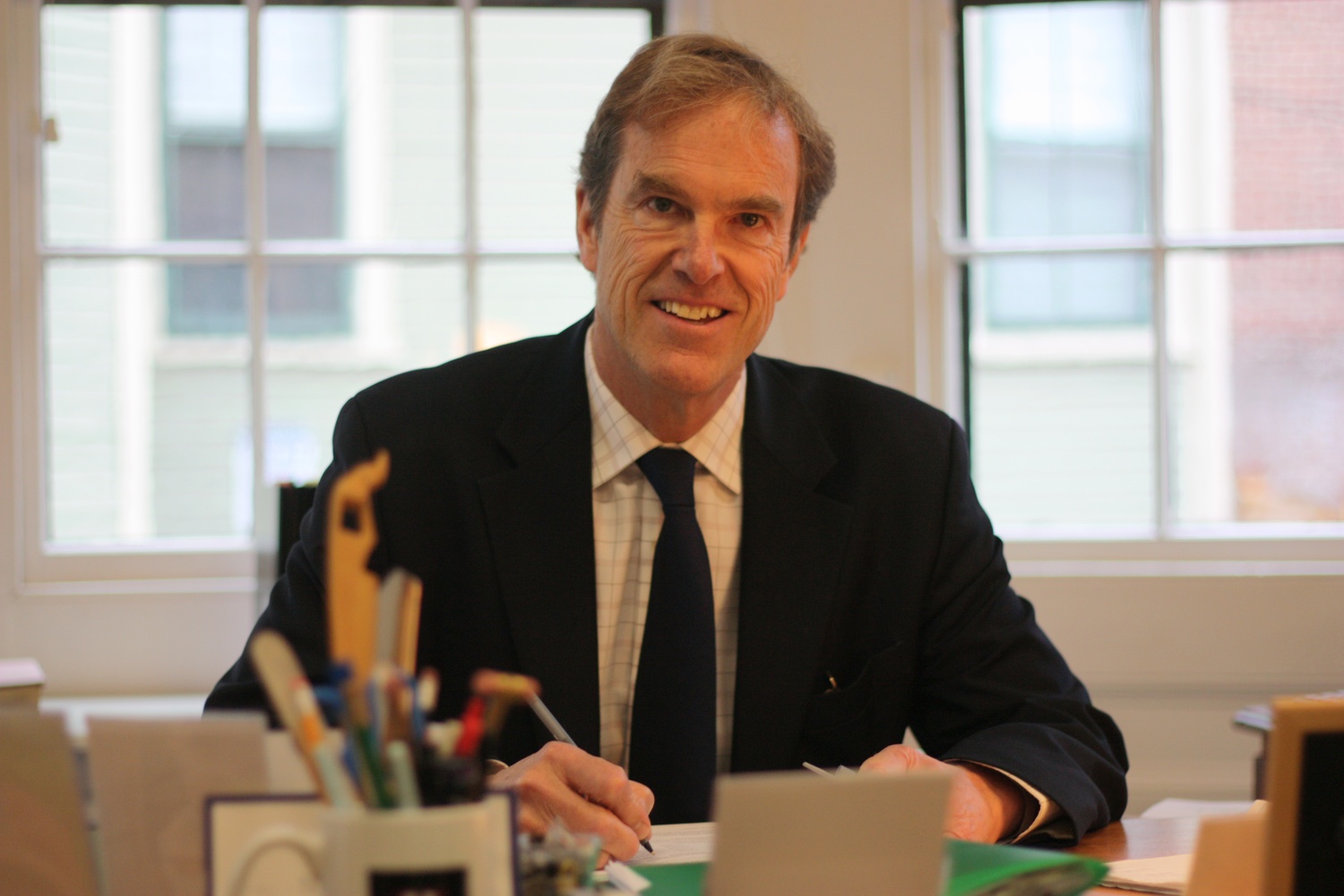 Dean of Freshmen Tom Dingman sits behind his desk. By Connie Yan
By Thomas A. Dingman

As I contemplate my life after Harvard, I am glad that a friend, actually a Harvard classmate, last week suggested I read a Wall Street Journal article entitled “In Defense of the Not-So-Busy Retirement.” Because these are largely uncharted waters I am entering, I find myself hungry for any kind of advice. In the article, the author David J. Ekerdt posits that my generation, in leaving work behind, often falls prey to cultural norms of busyness and sometimes does not embrace a role of “seeking” connections alongside one of “doing.” He points to the potential satisfactions of rekindling old relationships and bringing one’s attention to things one possesses: “In revisiting these belongings, what will come into focus is the person you were, are, and yet want to be.” What a great thought.

I have to admit that when I graduated from Harvard fifty-one years ago, I feared that relationships begun here would languish, given the different directions in which classmates were moving. Of course, we did not have the tools of electronic communication to support our efforts to stay in touch. Staying in touch required a strong commitment and intentional planning. We did a fairly decent job. For example, several friends and I created what we call “the Roundtable”—an annual, long weekend for good conversation, good exercise, and good food. It is a tradition that has survived decades, and I strongly encourage members of the Class of 2018 to create similar ways of staying connected. Such events are easy enough to plan: The hosting gets shared, and everyone has periods of time off from work. What you prioritize is your decision: We put the emphasis on meaningful discussion—about our own lives at work and at home, significant relationships, dreams and regrets, and the ever-changing condition of the world. It may sound hokey, but we have also gotten in the habit of circulating a draft agenda in advance in order to focus our attention and not feel after meeting that we had ignored something important.

Another way of staying in touch has been the reunions hosted by Harvard every five years. Even though most of my working life has been at Harvard, I have made a point of attending these. I hope that graduating seniors will give thought to doing the same. Whatever your experience in the College has been, you have shared a common base and been formed by both institutional events and happenings in the world beyond these gates. It is fascinating to catch up at intervals and see the different paths people have trod and learn from their reflections and aspirations. Now, I can’t say reunions have all been the same. After the first five or ten years out, it seemed to me there was a bit of competitiveness in the conversations. Someone sharing that he or she had just risen to the vice-president rank might be given a business card in return indicating senior vice-president status. (Time to summon the advice of Faculty of Arts and Sciences dean Michael D. Smith at Convocation: Don’t compare, connect!) But with succeeding reunions and the inevitable bumps people encounter—like deaths or divorces in the family and cherished jobs lost—people seemed eager to put it all out there and to provide support for one another. And it is not just connecting with old friends but making new ones at reunions that is so immensely satisfying.

At my 50th reunion last spring, much of the catching up had to do with issues regarding health (what we called the “organ recital”) and retirement. We were well prepared for those conversations because we had been asked once again—a five-year ritual—to compose personal reflections or other writings for the reunion report which was sent to us in advance of our getting together. I hope this year’s seniors will, when the time comes in five years, begin to participate in that tradition. The writing causes one to look inward, and reading others’ accounts of their lives sheds new light on our evolving selves.

I started this piece looking ahead personally from June 2018 and at what I learned recently from David Ekerdt’s musings about retirement. I certainly get the value of rekindling old relationships—staying in better touch now that there is more free time. About possessions, I had an amazing jolt reading my Harvard classmate Ian Benham’s write-up for the 50th reunion report. Ian, who was someone I met for the first time last spring, wrote about going through old possessions, “sitting before an array of decrepit cardboard boxes,” probably pulled from the cellar or attic of his house. Because of its powerfulness, I quote from his report:

“Then, somewhere near the bottom, the photo emerges, carefully enclosed in a parched, brown-edged envelope without stamp, date, or name. The figure looks out at me, stationary, opaque, without emotion or intent. Possibly a name on the back, but no trace of identity. Looks rather like an early Arbus, but a hundred years before her time, perhaps more.

"I sit mute before her, unconnected with this ancestor, the boundaries of my memory now reached, all time earlier than this now gone. Not that I am without curiosity about her—but we are at an impasse. What more can I now know of her, where she fits into the family narrative, why, indeed, she was in the box at all? I could embark down many avenues, hoping to bring her back, to fill out her face, to account for the sadness in her eyes. But that would only distract from my recognition that memory is finite, that even with the technologies of their time—now so laughingly archaic—I cannot hear her laughter; cannot know if she became quick of temper with the antics of small boys, or sang when she would comb her daughter’s hair; whether she smelled of fresh bread as a mother, or of candlewax when she grew old. All I have is a bleak face confronting me, in silence.

"But there is more.

"I realize that one day I will become this figure. I will sit in silent confrontation before a descendant perhaps a hundred or two hundred years hence. My archaic image will appear laughable in its turn, the opacity of the encounter just as complete. The living will look upon me and realize that they are now the ones with failing memory, that they have no idea of who I was, nor why some intervening ancestor should have decided that this image of me should be preserved.”

I feel gratitude for the people with whom I attended Harvard, for the chance to meet some as much as fifty years later, and for the opportunity to be enriched by their stories. With Ian’s priceless description, I have a somewhat new perspective on retirement, and incentive, not only to revive old friendships, but to begin the process of going through things, hoping to capture a better understanding of where and who I’ve been, and as David Ekerdt writes, “yet want to be”—a task to be undertaken with both curiosity, which ignites our learning, and with humility.