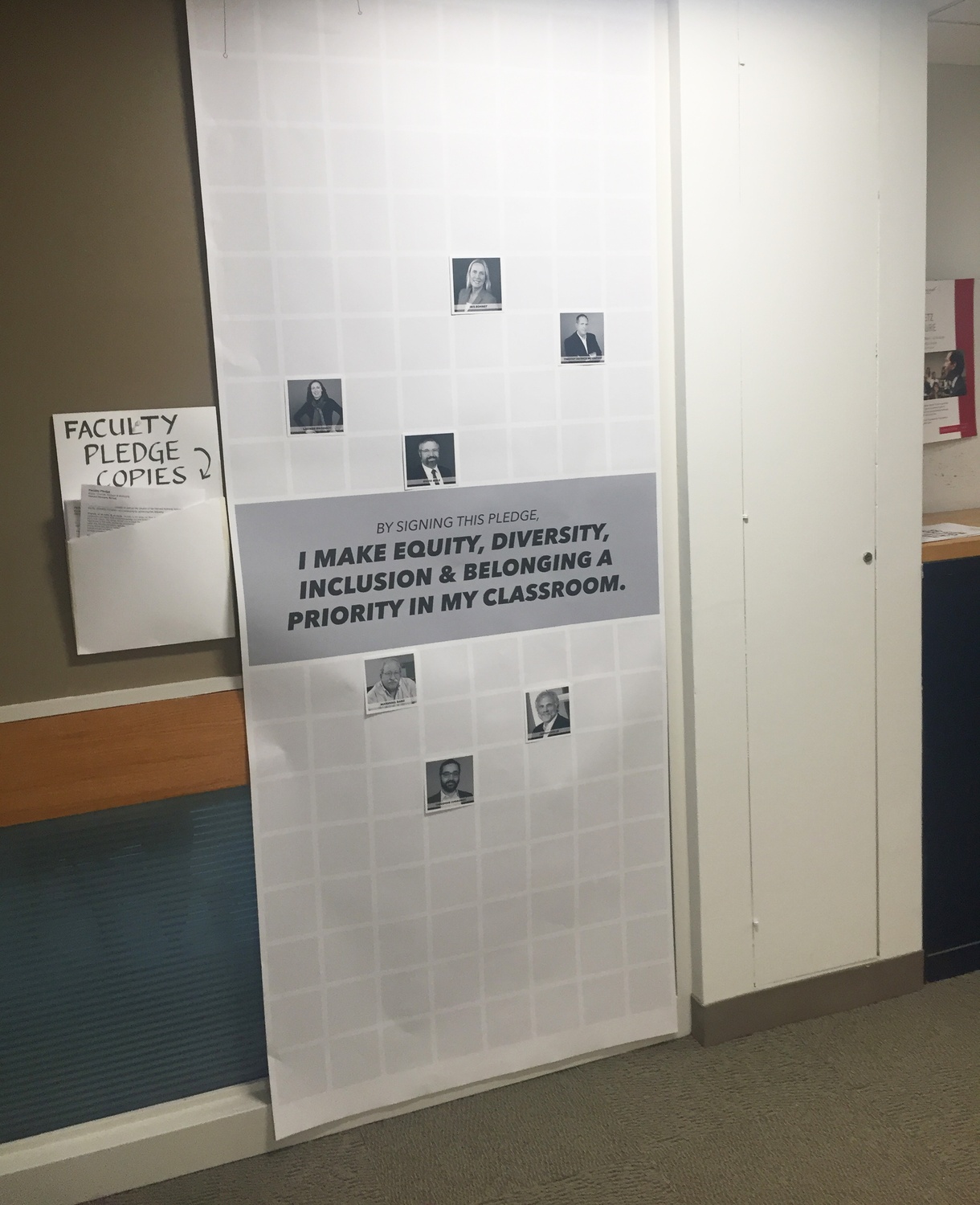 Several Kennedy School faculty members signed a pledge calling for and supporting efforts to diversify HKS students, faculty, and staff, according to a banner currently on display at the school.

The pledge, written by Kennedy School students, calls upon faculty members to endorse “all kinds” of diversity at “all levels” of the school by supporting research about historically marginalized groups. The pledge also asks professors to commit to frequent attendance at meetings about diversity, undergo professional development focused on diversity and inclusion, and carry out regular reviews of diversity initiatives.

Shaniqua L. McClendon, a second-year Kennedy School student and an organizer of the pledge, said it is the “beginning of a conversation” with faculty about greater minority presence at the school.

“We want to frankly get them on the record as supporting or not supporting this effort so we know who we are working with, where things stand, and where the pressure points are,” McClendon said in an interview.

McClendon said faculty play a “very, very large role” at the school, so their support is important when advocating for diversity issues.

“As far as we are concerned, the faculty... dictate what HKS as an institution is because they decide who new faculty are, what faculty members become more senior or tenured, and as you become senior or tenured, those folks get to set the tone of what things are happening at the Kennedy School,” she said.

Garrett M. Neiman, another student organizer, said he is “excited” about the pledge because it asks faculty to “put a stake into their ground” and commit to promoting diversity at HKS.

“This is not about blaming or shaming people necessarily but really starting a dialogue,” he added.

In response to the pledge, Kennedy School spokesperson Doug Gavel wrote in an email Sunday that HKS remains committed to diversity efforts.

“The Kennedy School continues to work toward the goals of enhancing diversity, inclusion, and belonging, and we support all members of our community working together to help achieve these goal,” Gavel wrote.

As of Wednesday evening, seven faculty members signed onto the pledge, and their names were displayed on the banner hanging in a hallway near the John F. Kennedy Jr. Forum. These faculty members said they endorsed the pledge for a variety of reasons, but all agreed that the school's lack of diversity is a significant problem school leaders need to address.

Khalil G. Muhammad, a professor of public policy and a vocal supporter of student activism around diversity at HKS, said it seems like the faculty have a “huge role” to play in changing culture at the school.

“I've been to a dozen diversity events of one kind throughout the year and I can count the number of faculty there on one hand.” Muhammad said.

“I find that a challenge for how this work is supposed to proceed given that the faculty, as the dean tells the students a lot, have essentially the bulk of the power to shape the direction of the school,” he continued.

Nicco Mele, director of the Kennedy School’s Shorenstein Center on Media, Politics, and Public Policy, said it was a “moral imperative” for him to sign this pledge.

“I think I am a walking caricature of privileged white male, and I feel like it's a moral imperative that I do what I can to fight racism and have a really inclusive approach to the greatest research institution on earth,” Mele said.

Jeffrey L. Seglin, director of the HKS communications program, said the pledge was a statement of support for “all the efforts that HKS is already undertaking.”

“Asking us to sign a statement that supports the efforts the administration has already committed to and has engaged us in did not seem like too much to ask of faculty,” Seglin said.

McClendon wrote in an email Wednesday that only one person solicited to support the pledge declined to sign, but organizers chose not to disclose the person's identity out of concern for “their standing” at the school.

“Although the respondent admitted that there was no proof that this would have a negative or positive impact on their standing at the Kennedy School, it does showcase the perceived culture of the institution,” McClendon wrote. “I am hopeful that those responsible for creating this environment, whether perceived or real, will sign on and prove to their colleagues that diversity and inclusion are important.”

Gavel wrote that HKS “supports” and “welcomes” the views of all affiliates of the Kennedy School.

“As we prepare the campus for reunion weekend and commencement, we will continue to support the visible expression of those views in ways consistent with our preparations,” Gavel wrote.