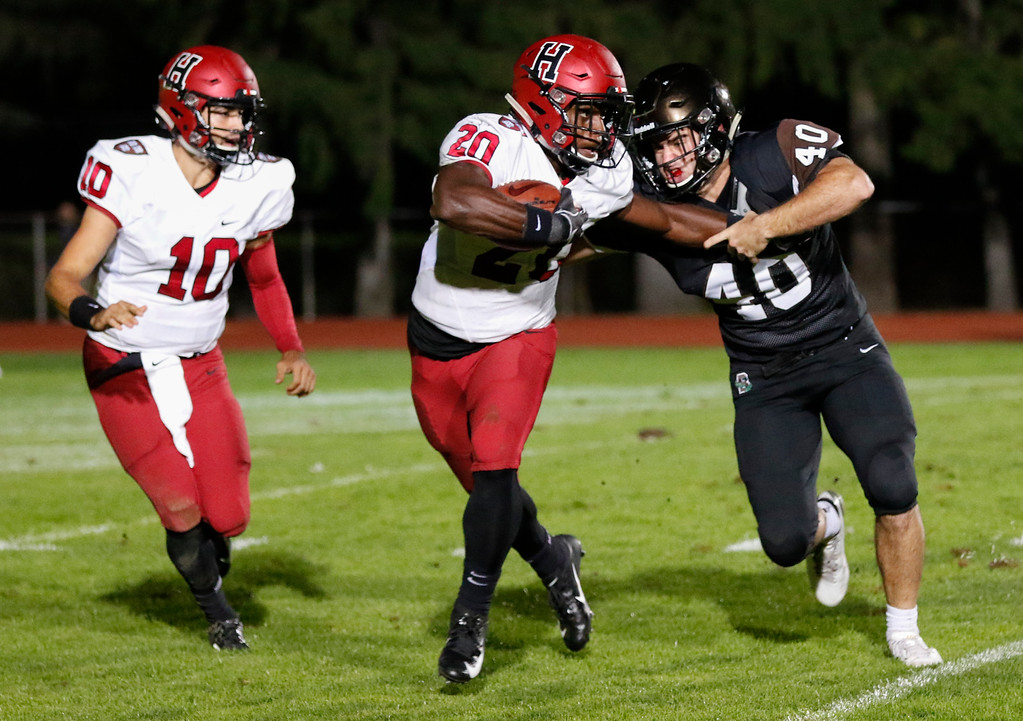 The matchup between Harvard and Brown is always an interesting one. The latter is convinced a rivalry exists and the former treats it like any other game. When the Bears host the match, students from both schools meet to tailgate — an anomaly in the Ivy League.

But it’s been said that rivalries don’t exist unless there is at least a little bit of parity, and the Crimson (2-0, 1-0 Ivy) had defeated Brown (0-2, 0-1) in seven consecutive instances. Last weekend, the story didn’t change as students tailgated and Harvard outshone the temporary lights at Brown Stadium, defeating the home team 31-17.

Friday night’s tango was less of a one-sided match than the box score indicates. If not for some stellar third down performances by the Crimson, a momentum shift in the final quarter nearly granted Brown the tying score.

Even from the first drive of the game all the momentum was completely on the Bears’ side. Not only was it the team’s first home game of the 2018 season, but it was against Harvard. Brown received the opening kick and sophomore quarterback Michael McGovern went to town. He accounted for every play in the first drive, either passing the ball or running it himself. The sophomore leader took the team 65 yards, to the Crimson 10-yard line, in 12 plays. Two incomplete passes later the field goal unit replaced McGovern and three points lit up the Bears’ half of the scoreboard.

“We got away with just a field goal,” Bears coach Phil Estes said. “We should have had a touchdown in that first drive and what a difference that would have made and the kind of momentum [we would have had]. We need to create those kinds of momentous situations so that we can get up from the first drive right to the last drive.”

Three minutes and six snaps later Harvard scored, establishing a lead it would not relinquish for the remainder of the night. Down 3-7, the Brown offense returned to the field only to jog back off after three plays. The Crimson offense similarly jogged off after three plays, only it left with six more points on the board.

“You take out that first quarter of the game, we beat that team, 100 percent. Even the first 10 minutes,” said Bears junior tri-captain Michael Hoecht. “We all know it.”

EXPERIENCE IS THE BEST COACH

One year after the sophomore made his debut as the first freshman quarterback to take starting snaps under Harvard coach Tim Murphy since Ryan Fitzpatrick ‘05, the sophomore returns to the fray and there is no question: Smith is the guy.

Smith has begun the season very well, showing few signs of his youth and playing like the second year starter that he is. The play caller boasts a 70.6 percent completion rating and 446 yards over the first two matches — not bad considering sophomore Aaron Shampklin ran for four touchdowns and 178 yards in team’s home opener.

More impressive has been his game management skills. Smith displayed good pocket awareness in the prior two games, avoiding sacks, throwing on the run and throwing the ball away when it was merited.

Smith’s maturity was on full display in the fourth quarter on Friday night. The Crimson led, 24-10, and was driving down the field when Smith aimed at a receiver inside the Brown 10-yard line and was intercepted. McGovern completed three of the next four consecutive passes — for 55, four and 29 yards — to earn the Bears seven more points. The home crowd stood to their feet, the Brown players on the sideline jumped around and sprayed water in the air. There had been a clear momentum shift in favor of the Bears, and now just seven points away, a comeback victory wasn’t so far-fetched.

Harvard started the drive at its own 13. Smith hit senior receiver Justice Shelton-Mosley for eight yards and then Shampklin lost one on a run. Third and three on the Crimson 21-yard line. Smith found senior tight end Dan Werner for four yards and the kept the drive alive. The sidelines quieted.

In the next three consecutive sequences, Harvard faced similar third down challenges. Each time, Smith found the open man and moved the poles, never stuttering and never mistepping in the high-stakes drive. When Smith eventually found senior receiver Adam Scott in the endzone for exclamation point, the silence in the stadium was deafening.

The drive bled eight minutes off the clock and with only four minutes remaining, the match was all but won for Harvard.

“He’s always like this,” said Murphy drawing a steady straight line in the air with his hand. “He doesn’t get too high, he doesn’t get too low. He had a couple of picks that he probably didn’t need to make but he just stays the same — he keeps his poise, he keeps fighting and I thought this was a step forward for him in terms of how he managed the fourth quarter.”

In a press conference after San Diego, Murphy called Shampklin and his roommate, sophomore running back Devin Darrington, “thunderbolt and lightfoot.” Shampklin then made a cryptic comment about the difference in the running style between the two.

“Teams have to game-plan for both of us,” Shampklin said. “And then we also have a lot of other great running backs in the backfield that you guys haven’t even seen yet, so once they come out there, teams are really going to have to game-plan against that.”

Perhaps Shampklin was previewing another sophomore, B.J. Watson. In Friday night’s game, Watson rotated in for snaps alongside Shampklin and Darrington. Once, Watson took the ball and ran 43 yards to the house, scoring his first career touchdown.

The depth of the Crimson’s backfield might be the best in the Ivy League. The team has three solid running backs, all of which boast touchdowns in the first two games.

It’s worth mentioning Harvard’s presumed preseason starters have not yet seen game action due to injury. Both seniors Charlie Booker III and Semar Smith have been absent, but the Crimson ground game has not flagged. It presents an interesting quandary for Harvard’s opposition.

“I don’t know if you guys watched last week but [Shampklin] ran for 178 yards and four touchdowns,” Estes said. “He was running like he was running through butter against San Diego. We held him under 100 and no touchdowns.”

Which is true. It’s also true is Watson ran for 73 yards and a touchdown while Darrington tacked on 66 yards more. Harvard still tallied 237 rushing yards against Brown, only 29 yards fewer than it did against San Diego.