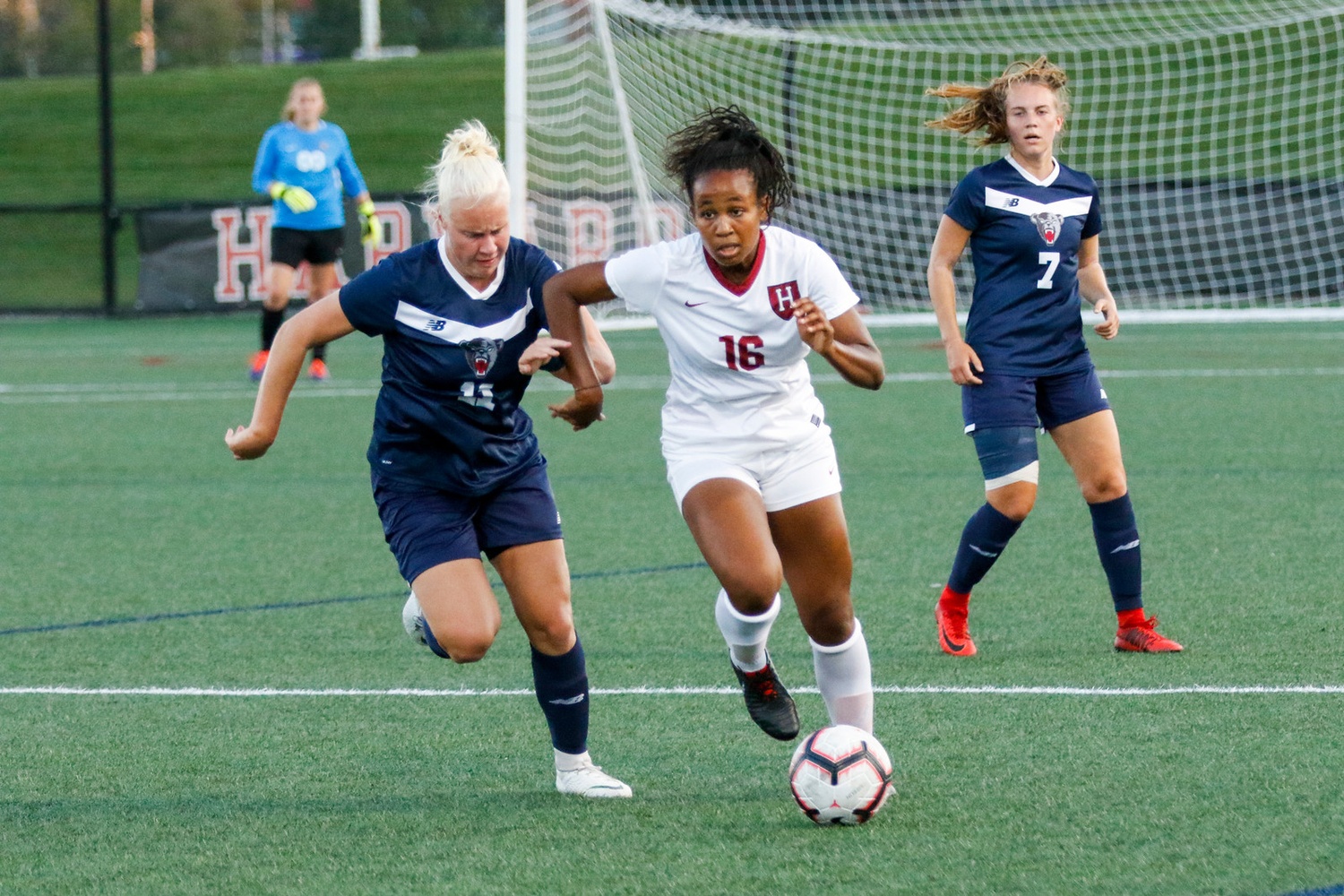 The Harvard women’s soccer team plays eight nonconference games between August 24th and September 16th. In those three-odd weeks before it travels to Penn for its Ivy opener on September 22nd, the team has a couple of goals:

1. Create effective synergy in real-time play between a young attacking corps, a new-faces backline, and a veteran netminder presence;

2. Stay healthy during the annual physical grind that sees the Crimson constantly take the field;

The non-Ivy games in late August and early-mid September almost serve as a test for the squad, one after the other—can Harvard, young and brimming with talent across the board, come together as it progresses through 2018? Can it gel enough to pull off big wins against quality non-conference competition? Can it respond to tough, tiring losses that inevitably accompany every season?

The 2018 campaign is now five games old and the Crimson finds itself knee-deep in the thick of uncertainty. A strong run at Providence, Boston College, and Northeastern would very well set the tone for a successful season—but a poor showing could do the opposite.

“[Our team’s synergy] has been developing really well, it’s been an interesting challenge,” senior midfielder Leah Mohammadi said. “We have ten new freshmen, so there’s so many new faces—it’s crazy trying to figure each other out as a team, but we’ve done a great job since our California trip. We’ve been playing incredibly together.”

On Sunday, Harvard locked horns with Quinnipiac, taking down the Bobcats on the road, 1-0, on freshman midfielder/forward Sophie Hirst’s second-half goal. On Wednesday night at Jordan Field, the Crimson (2-3) followed it up by dropping a 1-0 contest to the Maine Black Bears in a disappointing home loss.

Maine freshman forward Emma Donovan poked home a wide-open rebound in front of the net to propel the Black Bears (2-2-1) to a 1-0 victory over Harvard, as the Crimson offense couldn’t find the back of the net despite 11 shots and seven corner kicks.

“We had a lot of the ball, but our quality was just a little off,” head coach Chris Hamblin said. “I think it was a lack of quality, and I think it was a slow start—we were slow out of the gates, we let Maine get ahead of us in that regard. Credit to them, but we’ve got to be better.”

Harvard was outshot 6-2 in the first half and perhaps wasn’t quite in gear at the opening whistle. Junior goalie Kat Hess, who started and made two saves in the first half, wasn’t able to corral a rebound in the 34th minute and Donovan didn’t miss the resulting wide-open ball.

“[Maine] scored on a goal that was preventable from our standpoint, but those happen—mistakes happen,” Hamblin said. “I thought we did a lot better job in the second half, moving the ball, changing the point of attack, and opening them up a little bit.”

The Crimson had plenty of scoring chances in both halves but never put a tally on the board.

Senior forward Alli Wiggins had a nice opportunity in the 26th minute off a well-placed ball from sophomore forward Murphy Agnew, but her shot floated into the chest of Maine goalie Annalena Kriebisch. In the 42nd minute, Mohammadi’s left-footed chip shot just hit the top of the crossbar. Mohammadi and sophomore defender/midfielder Linda Liedel couldn’t find the equalizer on free kicks near the box late in the second half, either.

The Black Bears defense, combined with how Maine slowed the game down in the second half, frustrated Harvard’s offense as the clock wound down. Maine’s aggressive clock management, draining time at every opportunity, also succeeded in making the Crimson’s job even more difficult.

“One thing we want to make sure of is that in the Ivy League, we don’t have one of these games,” Hamblin said. “I think we’re going to look back at this game and say, ‘we could have done better’, so we’re going to learn from it now and put the pieces in the puzzle.”

The loss marks the second time Harvard has been held goalless this season, though its previous shutout came when it mustered only one shot against Cal to open the season.

The Crimson turned up the intensity in the second half under the lights, outshooting Maine nine to one, but Donovan’s 34th minute goal stood until the final whistle.

“We’re trying to still figure each other out as a team, but we’ll build on this, and there’s a learning curve,” Mohammadi said.

Senior goalkeeper Danielle Etzel notched her second-straight individual shutout, the fourth of her career, in Harvard’s 1-0 victory over Quinnipiac (1-4) at QU Soccer Stadium in Hamden, Conn. The veteran netminder made two saves as the Crimson offense in front of her poured in 19 shots, including eight on goal.

Hirst’s goal in the 53rd minute, assisted by Agnew, was all Harvard needed to improve to 5-0 all-time against the Bobcats. The goal was the rookie’s second of the season, joining her with Mohammadi as the team’s multi-goal scorers on the season.

Agnew, the reigning Ivy League Rookie of the Year, once again was at the center of the attack, slotting a pass through to Hirst to allow the finish. The sophomore now has a team-leading two assists on the season.

Etzel played all 90 minutes to improve to 2-2 on the season. The Crimson defense stood strong, allowed the Bobcats only five shots, two of which were on goal.

Etzel’s counterpart, Quinnipiac junior goalie Olivia Myszewski, took the loss after stopping eight shots but letting one through in 90 minutes of action.