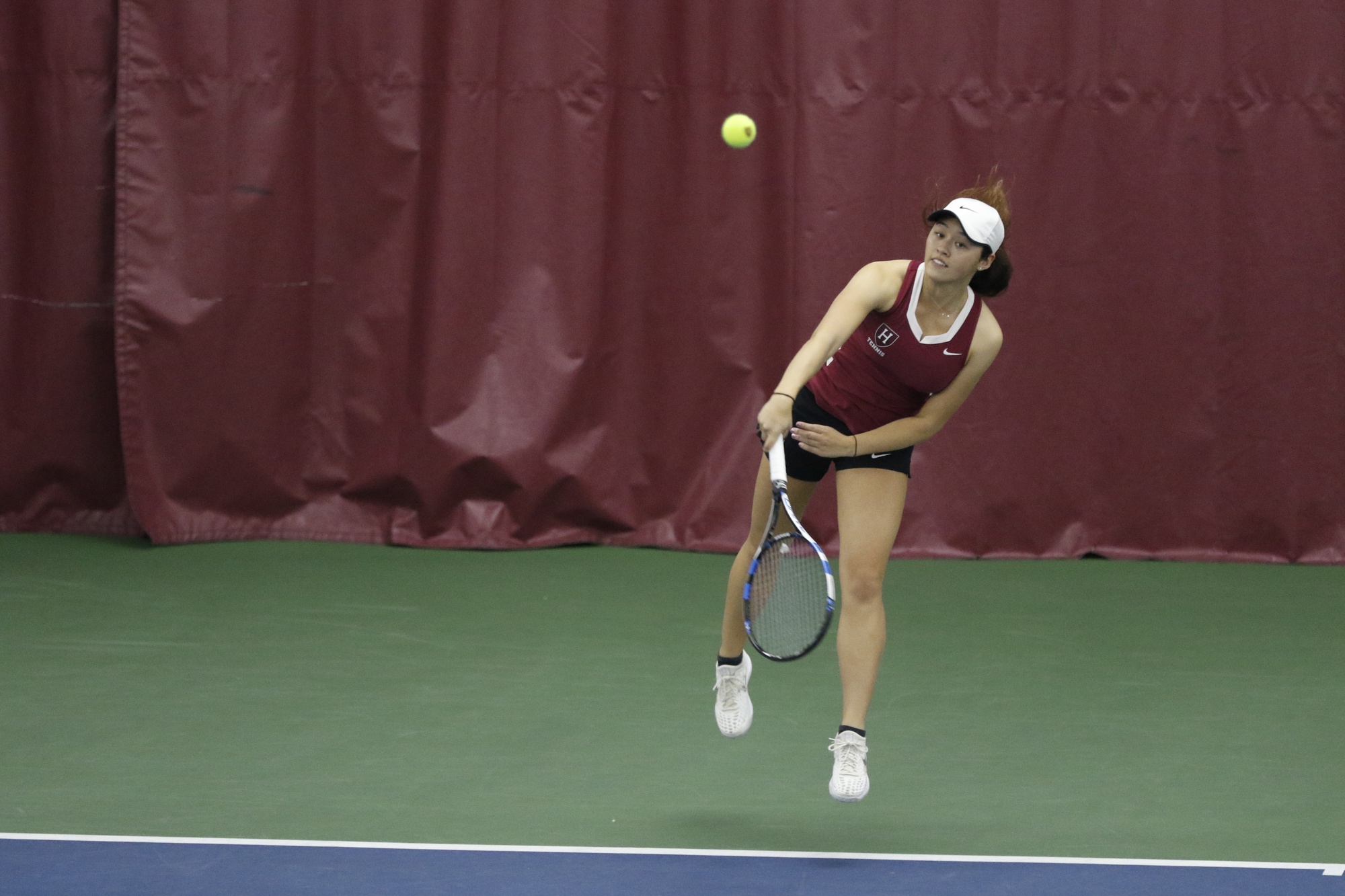 As Harvard men’s and women’s tennis teams kick off the latter half of their respective seasons, here is a brief recap of their seasons to date.

Some things stayed the same, though, including the Crimson’s Ivy League dominance. After finishing 6-1 in conference play last year, Harvard opened the 2018-19 season with a string of strong tournament performances and a 4-0 record in head-to-head play.

“Our team got off to a strong start at [Dartmouth] and [the] Columbia [Invite], where a lot of our younger players got victories,” freshman Rachel Lim said.

The Crimson then rounded out September with wins against Cornell, Boston College, and Dartmouth at the Bulldog Invite in New Haven.

October brought more success for Harvard, starting with senior captain Erica Oosterhout’s run to the final round of the ITA All-American qualifier, scoring a 7-6, 6-2 upset against Stanford’s Caroline Lampl before being eliminated on a close 5-7, 6-7 in the final round against Texas’ Petra Granic.

Oosterhout then paired up with Lim in November to earn doubles victories against Syracuse and Boston University at the Harvard Invitational to finish up the fall season.

Other notable performers throughout the season included sophomore Neha Gupta, who went undefeated at the Bulldog Invitational, and the squad of freshmen, who combined to win seven of eight matches at the Harvard Fall Scramble.

What was the key to all the success? Practice, according to Lim.

“All of us improved many aspects of our game,” said Lim. “Our coaches made sure to streamline our practices and work on everything from conditioning to strategy. We all focused in practice and made steady improvements throughout the year, and that showed in our tournament performances.” 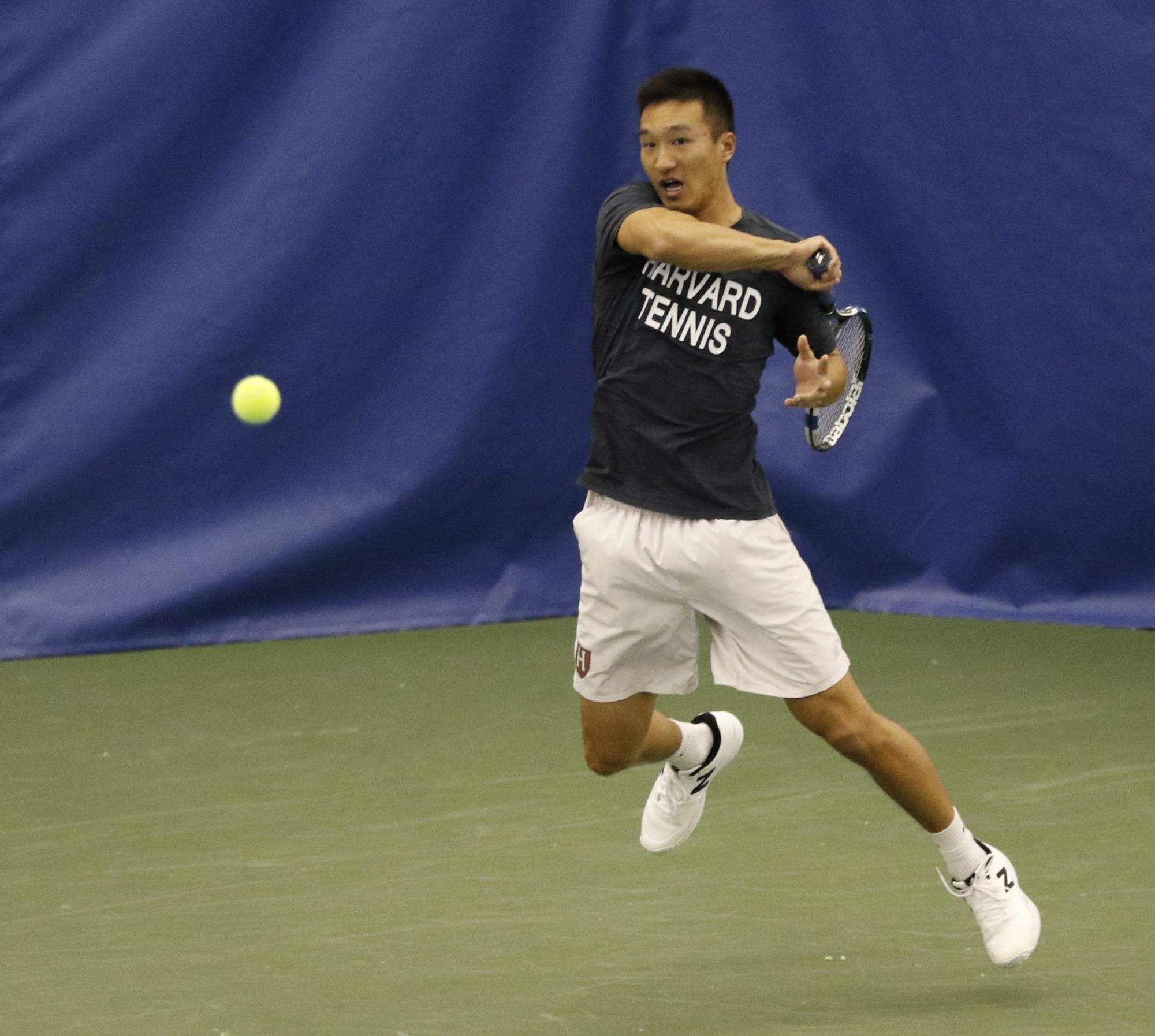 Senior Andy Zhou is a co-captain on the men's side, alongside classmate Christopher Morrow. By Timothy R. O'Meara

The men’s team, too, saw some changes in leadership at the beginning of the season with the promotion of Andrew Rueb ‘95 to head coach. Rueb follows in the footsteps of coach Dave Fish, who spent 42 years heading the Crimson, amassing 21 titles over that period. Rueb had considerable success of his own at Harvard, winning Ivy League Player of the Year twice before captaining the Crimson in his senior year. Before his head coaching gig, Rueb served as an assistant coach for the program for 11 years.

Rueb’s impact was immediately felt by the team, who started out strong in the Chowder Fest tournament, where senior captain Andy Zhou opened as his flight’s champion, going 3-0 on the weekend.

Harvard headed down to Princeton and Yale the next weekend for the Ivy Plus tournament, where freshman Steven Sun went undefeated in singles and paired with senior Michael Peters to go undefeated in doubles as well. Sophomore Lane Leschly also swept through the tournament without any losses, continuing the strong start for the Crimson on the year.

“We had a lot of good results of the bat,” freshman Harry Walker said. “[The freshmen] quickly became adjusted to being the seventh man on the court, which meant we had to focus on helping out teammates as well.”

As the season progressed, Harvard continued to benefit from strong individual performances, notably at Dartmouth’s Big Green Invite. Walker paired with Peters to sweep doubles play, and both players also managed to finish undefeated in singles play and winning the tournament in their respective divisions.

Harvard completed its fall at Wake Forest, where Walker and Peters finished top in their doubles bracket and Sun ended up in fourth place in singles.

“We were all exposed to some really good matches in the fall,” Walker said. “It was great to face some tough competition.”