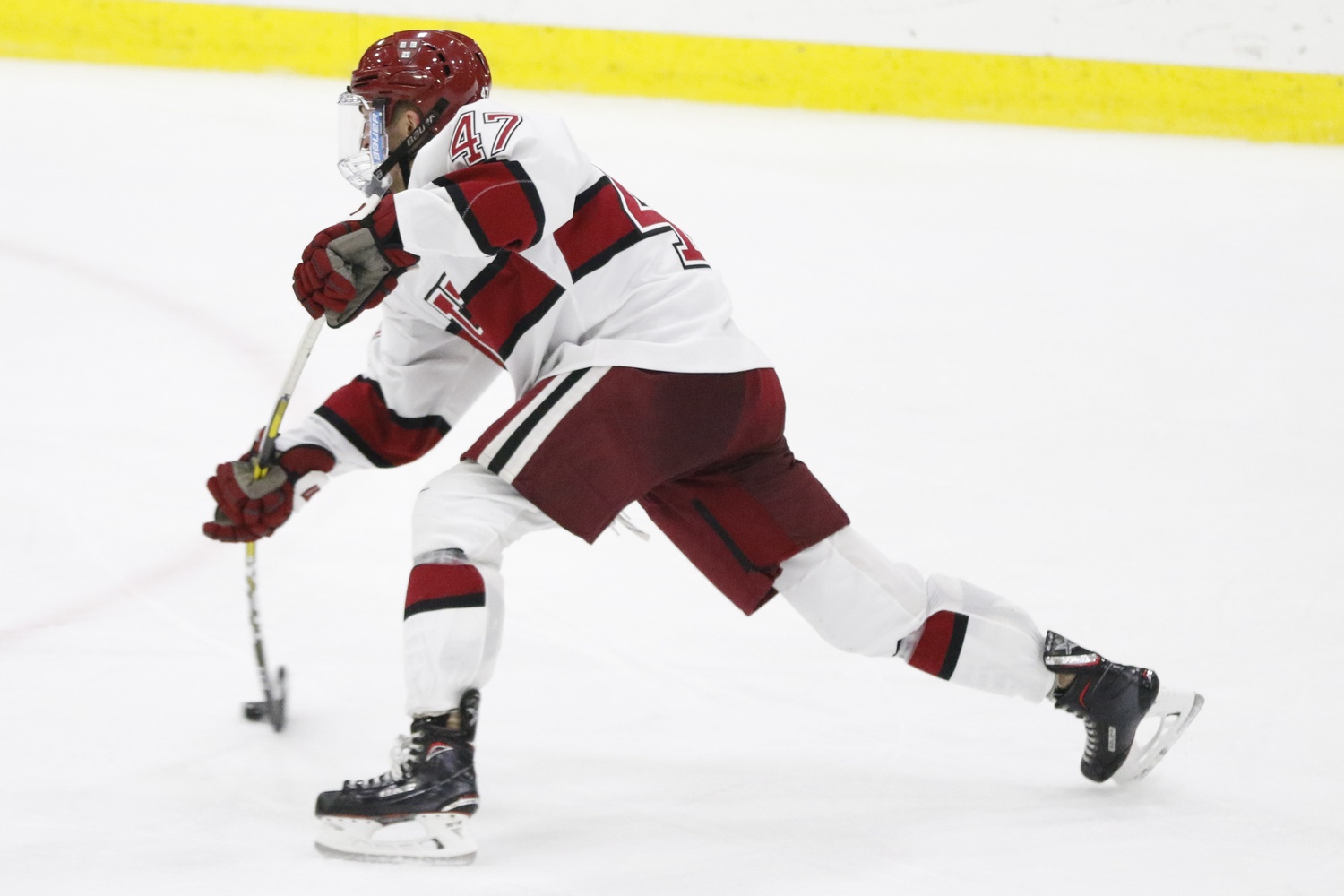 Of all the things that might leave a losing team frustrated, Friday brought an unusual deciding factor into the clash between RPI and the Harvard men’s hockey team: camera angles. A tense video review three minutes into overtime attempted to decide whether Crimson freshman Casey Dornbach had scored a clean goal — one that would start Harvard’s 2019 with a win — or kicked the puck into the cage.

The indicator in such judgment calls is whether or not the player used a “distinct kicking motion”; the kick has to be obvious for referees to overturn the call on the ice. The problem? From one camera angle, the pane in the glass perfectly obscured the alleged kick. Another angle showed his whole body, but not his left skate. The refs ultimately ruled in the Crimson’s favor, and that bit of puck luck helped the hosts begin the second half of the season on the right foot.

Harvard (6-4-2, 3-3-2 ECAC) fended off the Engineers (4-14-0, 3-5-0) atop two-point performances from all its top line players. Though RPI forced overtime in a solid comeback effort, the visitors were unable to break a seven-game losing streak.

“Our compete level throughout the game was consistent enough for us to be able to separate from them,” head coach Ted Donato said. “But we’ve got to have a higher standard...as to how we’re going to compete for 60 minutes.”

Strong starts have been a question for the Crimson in the 2018-19 campaign. Tonight, the team brought the game to the Engineers despite the loss of rookie forward Jack Drury, who is going for gold with Team USA at World Juniors. Quick transition rewarded Harvard at the midway mark of the first frame, as Dornbach and Zerter-Gossage raced to a 2-on-1. Dornbach hung on until the sole RPI defender ahead of him stretched out on the ice to try and take away his passing lane. Instead his backhand found Zerter-Gossage, who was able to tuck it around freshman net-minder Owen Savory for his team-leading ninth goal. The apple tied Dornbach with junior defenseman Adam Fox for the most assists on the team (15) and the most assists per game in the NCAA (1.25).

“It’s definitely a luxury to play with someone that you can trust will hit you once you get into the zone,” Zerter-Gossage said. “[Dornbach and Bowlby] have a mix of speed and hockey sense that makes it really easy for a center to play with.” 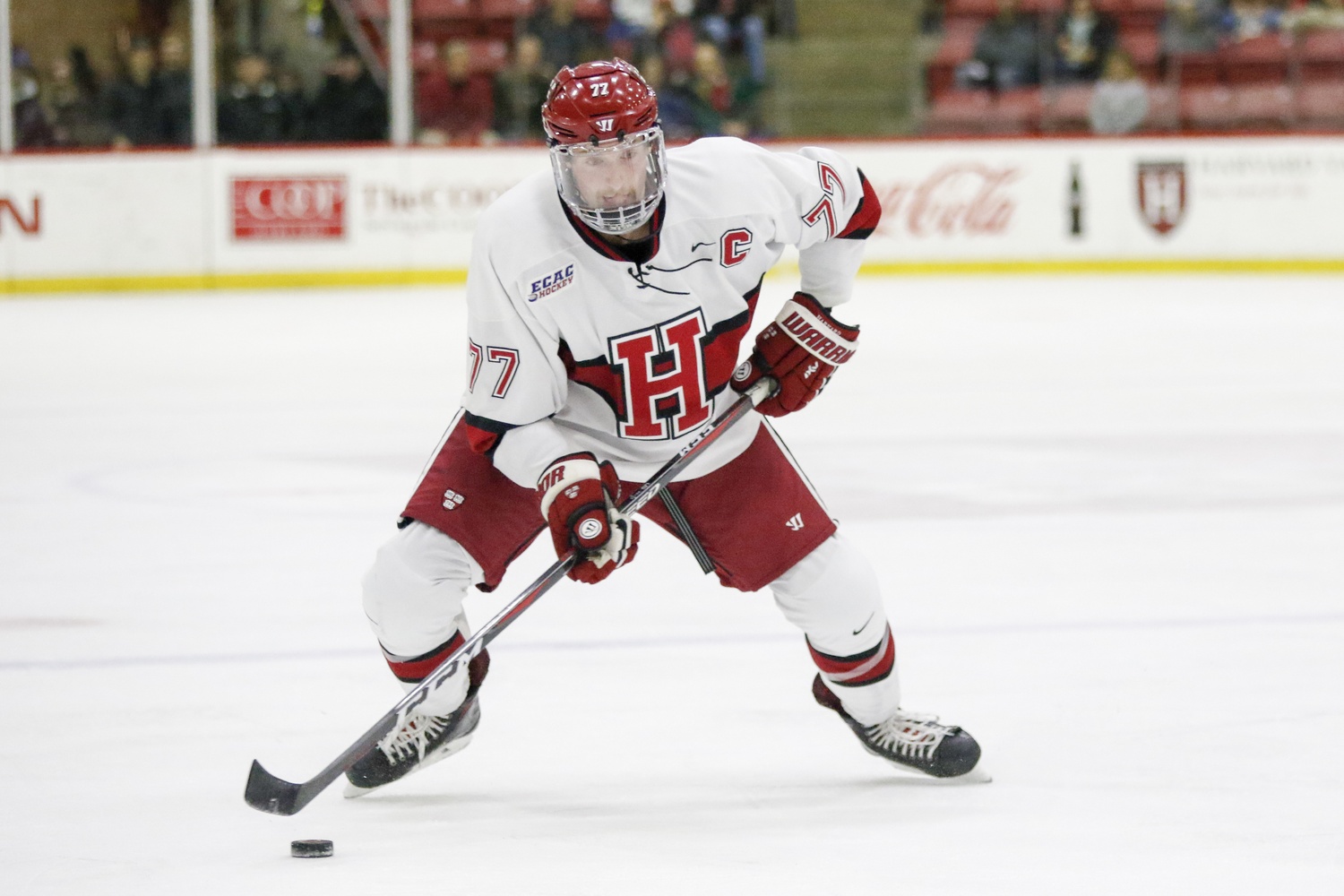 Despite being stopped on a one-on-one chance early in the first, Zerter-Gossage got a tally back. He leads the team in goals with nine on the season. By Timothy R. O'Meara

Less than seven minutes later, the Crimson extended its lead. An Engineer clearing attempt met with a keep-in from sophomore defender Reilly Walsh at the blue line. Walsh’s quick shot was tipped at the front of the net by rookie Baker Shore, beating Savory to put the hosts up by two. RPI wasn’t ready to let Harvard bulldoze past it, however. The Engineers closed out the first period with a goal of their own, notched by junior blue-liner Shane Bear.

A closely-fought goalless second period gave way to the final frame, and RPI wasted no time in evening things up courtesy of a 2-on-1 junior forward Todd Burgess. Undeterred, the Crimson piled on shots, but Savory was more than up to the task this time, turning away 18 attempts in the third period alone. Dornbach’s OT heroics gave the game its conclusion; despite Savory’s insistence that the play was not a goal, he departed the crease with a respectable .930 save percentage and a loss.

At the other end of the ice, senior goaltender Michael Lackey also had a solid night, turning in a .923 performance and giving Harvard its sixth win in eight games. With Lackey seeming set in his starting position, the Crimson will turn its attention to other aspects of its game as it attempts to build on recent success.

“[Lackey] handled the shots, especially when it was 2-2,” coach Donato said. “I thought we did a pretty good job allowing him to see the puck most of the night. He made the saves when he needed to, and we got the win because of it.”

The team’s month-long break from conference play ends abruptly as Harvard faces several challenging games, including a road contest against No. 5/4 Quinnipiac, the season series decider at No. 20 Cornell’s notorious Lynah Rink, and a rare midweek matchup against crosstown rival Boston University. The Crimson will hope to return Drury for Tuesday’s contest against BU so that its regular lineup can prepare for the upcoming slate of games. For now, though, the team will treasure its two conference points and the ensuing jump to fifth place in the ECAC.