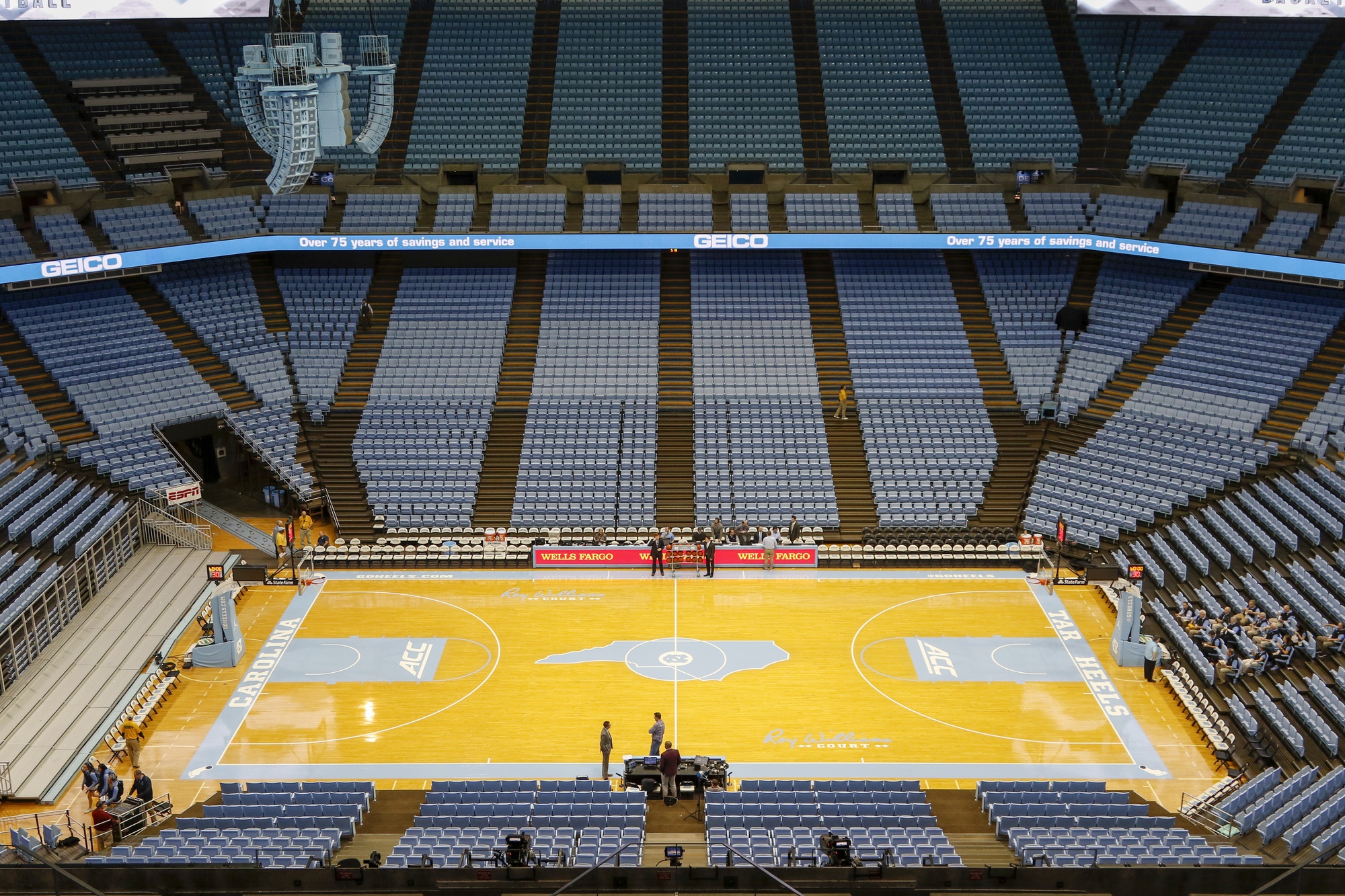 In Photos: A Trip to Chapel Hill for Harvard Men's Basketball

The Dean Smith Center played host to the sixth-ever matchup between the Crimson (6-6) and Tar Heels (10-3). Harvard coach Tommy Amaker participated in the inaugural contest here on January 18, 1986, as a junior guard for Duke. 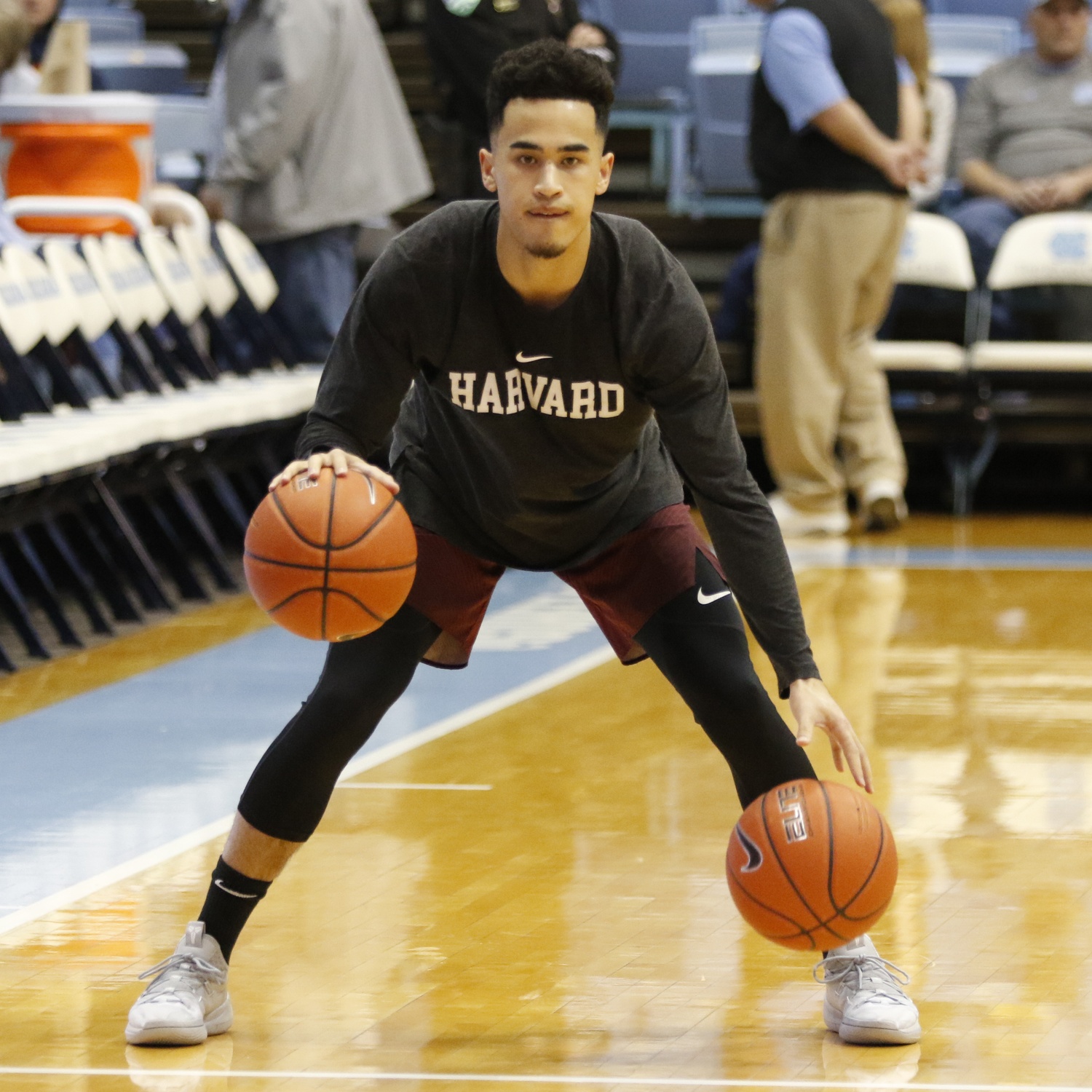 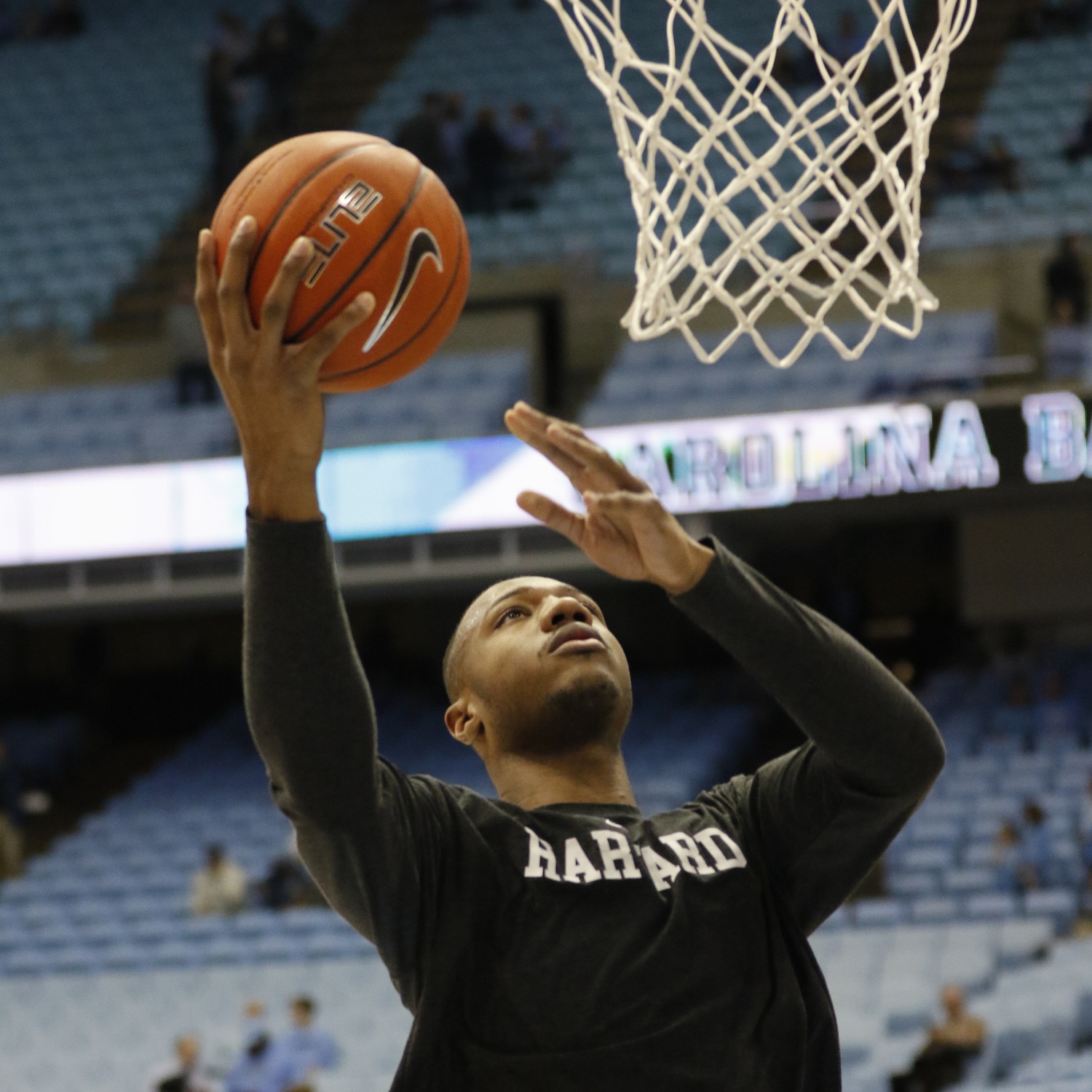 Curl It In -
By Timothy R. O'Meara

Rev. Jonathan L. Walton, the Plummer Professor of Christian Morals and Pusey Minister in the Memorial Church, embraces sophomore forward Reed Farley prior to tip-off. The longtime mentor for the program and Atlanta native was a valuable guide to the team this past week when it toured the King Center, where Dr. Martin Luther King Jr. is buried. 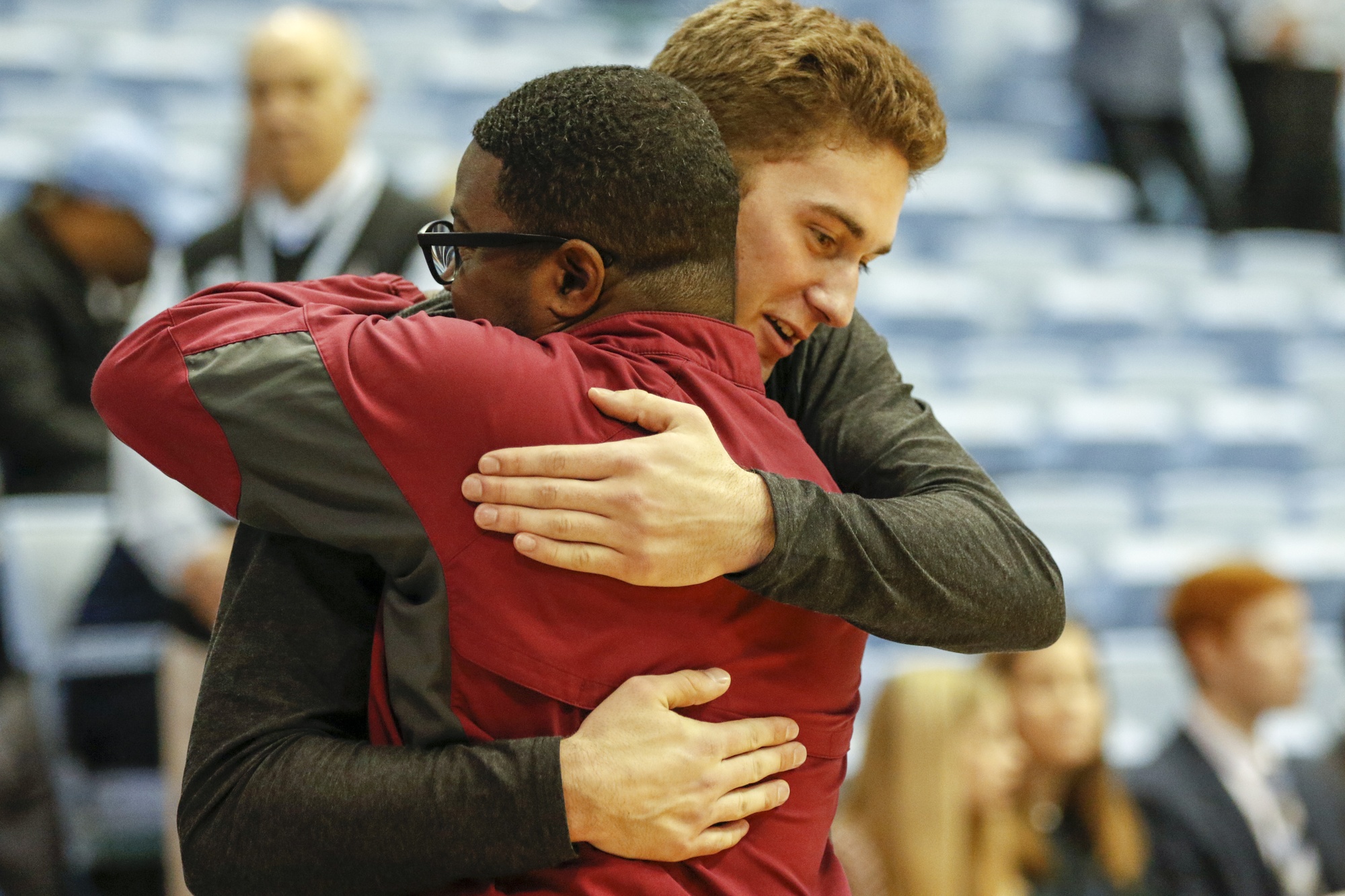 No. 15 University of North Carolina is introduced to a crowd of over 21,000 in Chapel Hill. Notable members of the current Tar Heel roster include All-American senior Luke Maye as well as freshmen standouts and projected NBA first-rounders Nassir Little and Coby White.

Harvard’s starting lineup held tight to the Tar Heels side in the first five minutes of the game, trailing by just one point. However, the Crimson second unit was less successful, allowing UNC to sprint out to a 10-3 run to bring the scoreline to 17-10 at the 11-minute mark. 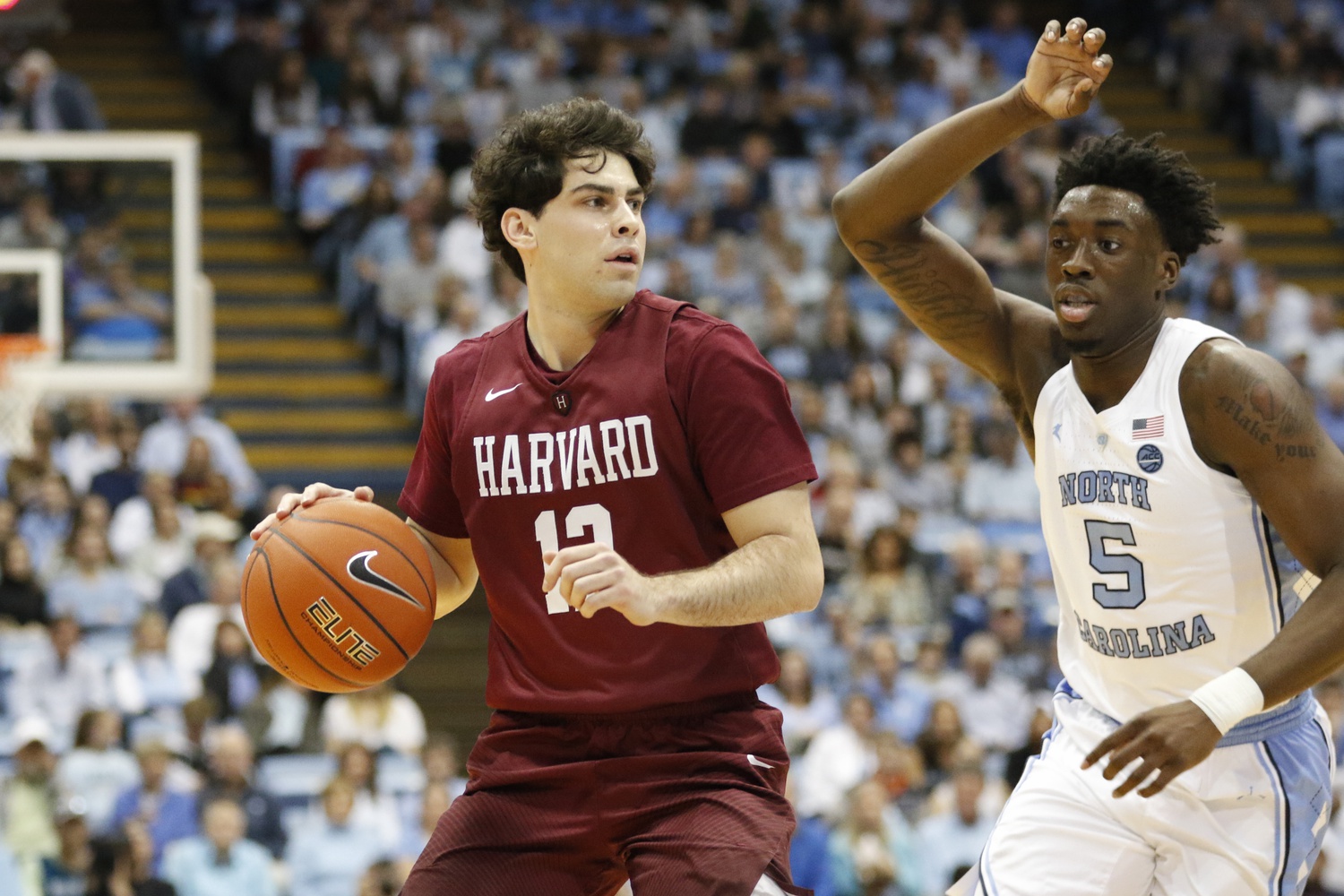 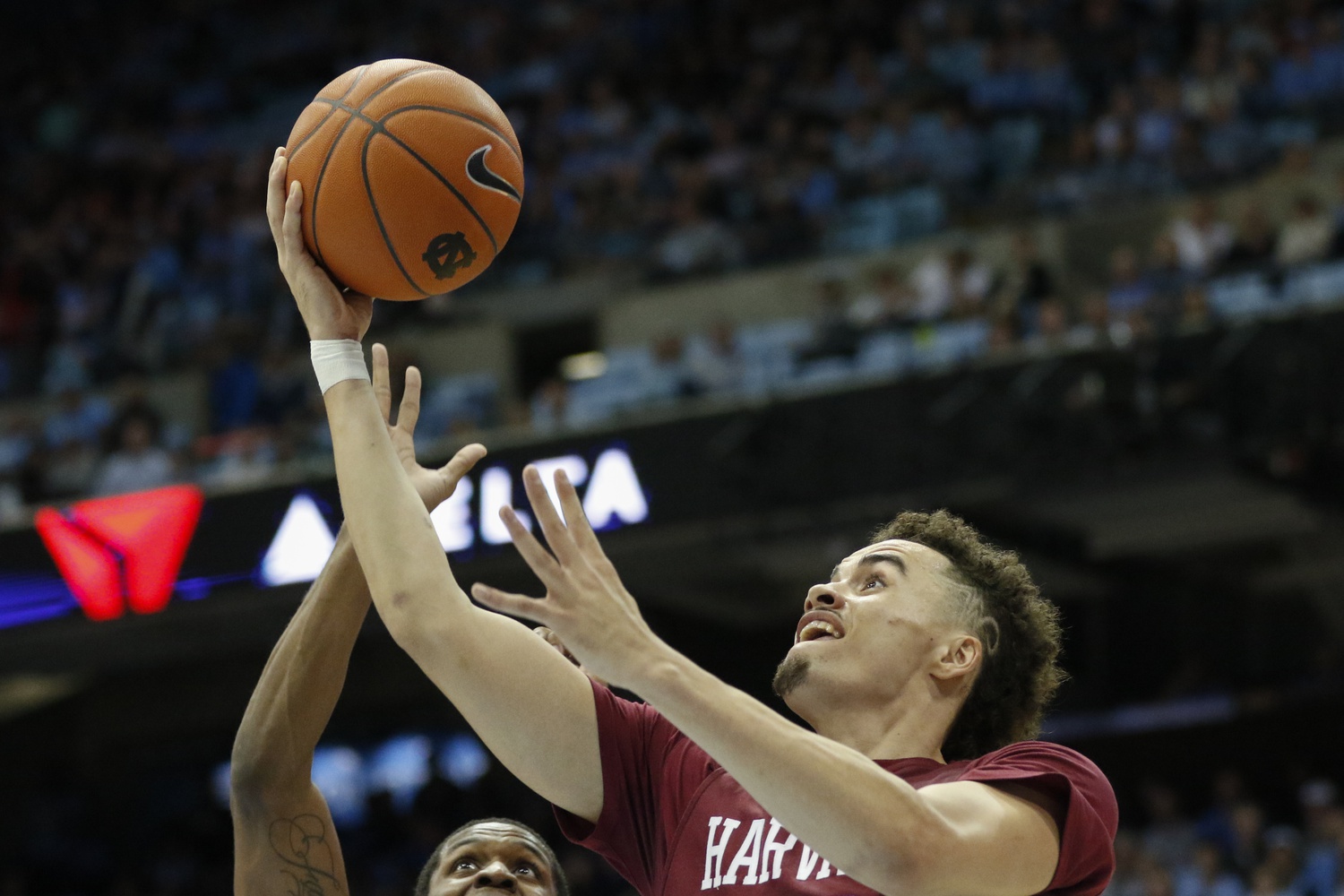 The Crimson tallied eight triples on the night over 24 attempts. On the opposing end, UNC fared no better in terms of accuracy, converting just six of its 21 tries from deep. Both Juzang and Robert Baker flushed in two treys to lead the team.

Down early, Harvard catapulted itself back in the lead for a brief period of time heading into the final eight minutes of the first frame. The 20-19 margin at that point in favor of the visitors would be the last time the Crimson would have the score on its side, however. 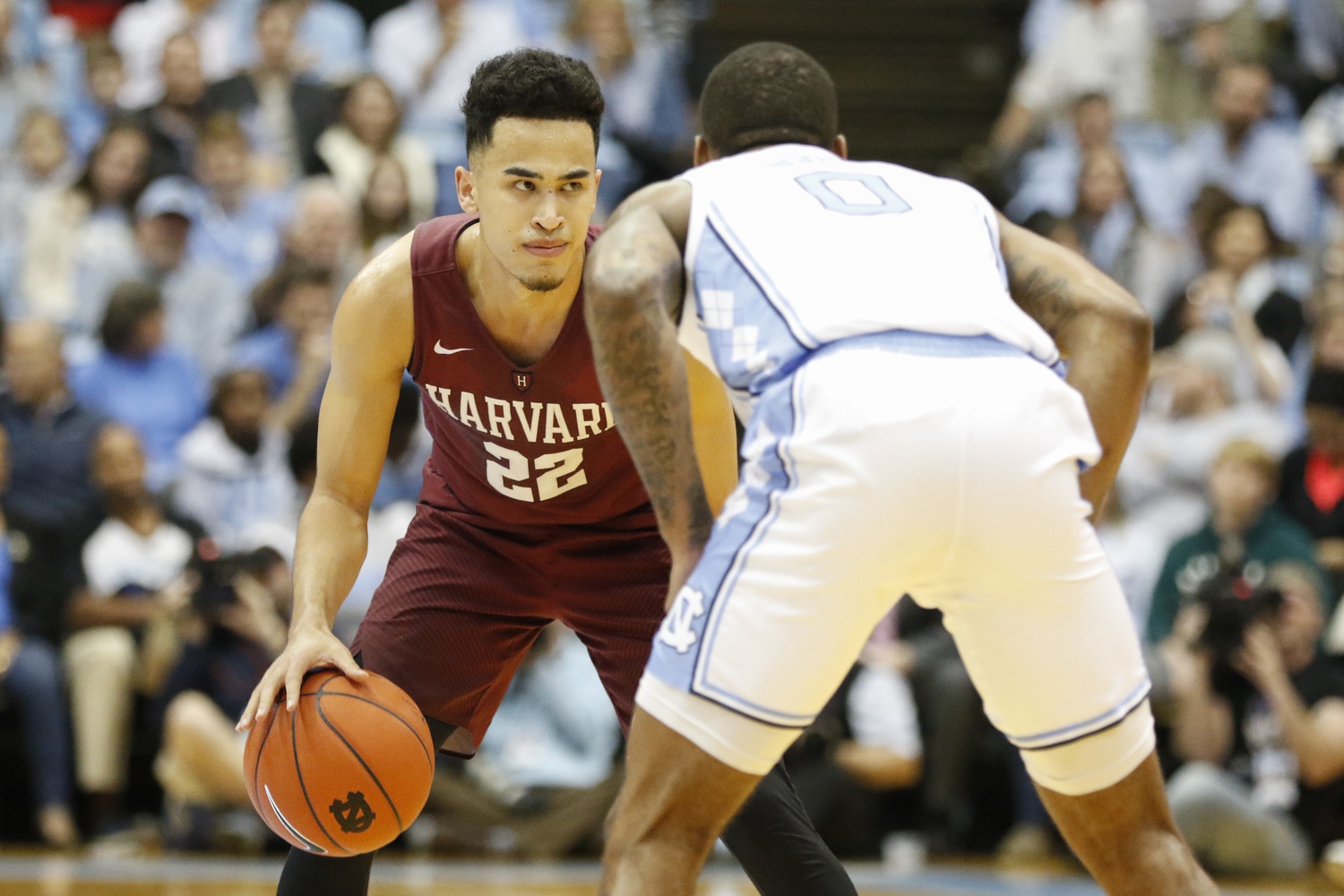 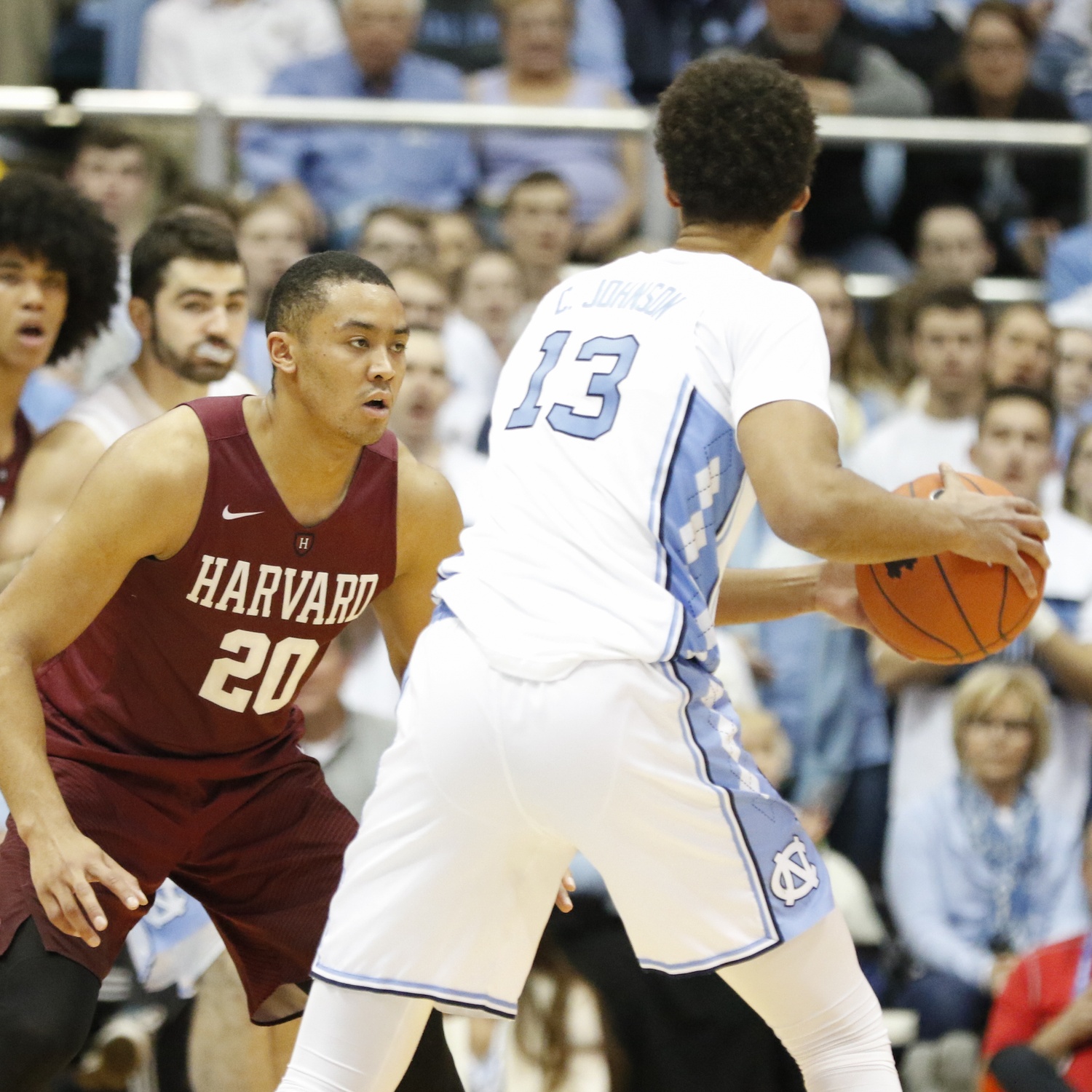 At halftime, the Crimson trailed 41-31 despite two late frame triples from Juzang and freshman Noah Kirkwood. A Mason Forbes lay-up at 16:24 in the second half brought the Crimson back within 5 points of the Tar Heels, but this would be the last field goal in a nine-minute drought. UNC’s relentless pace and speed in transition, lead by primary ball handler Coby White, overwhelmed its opponents. 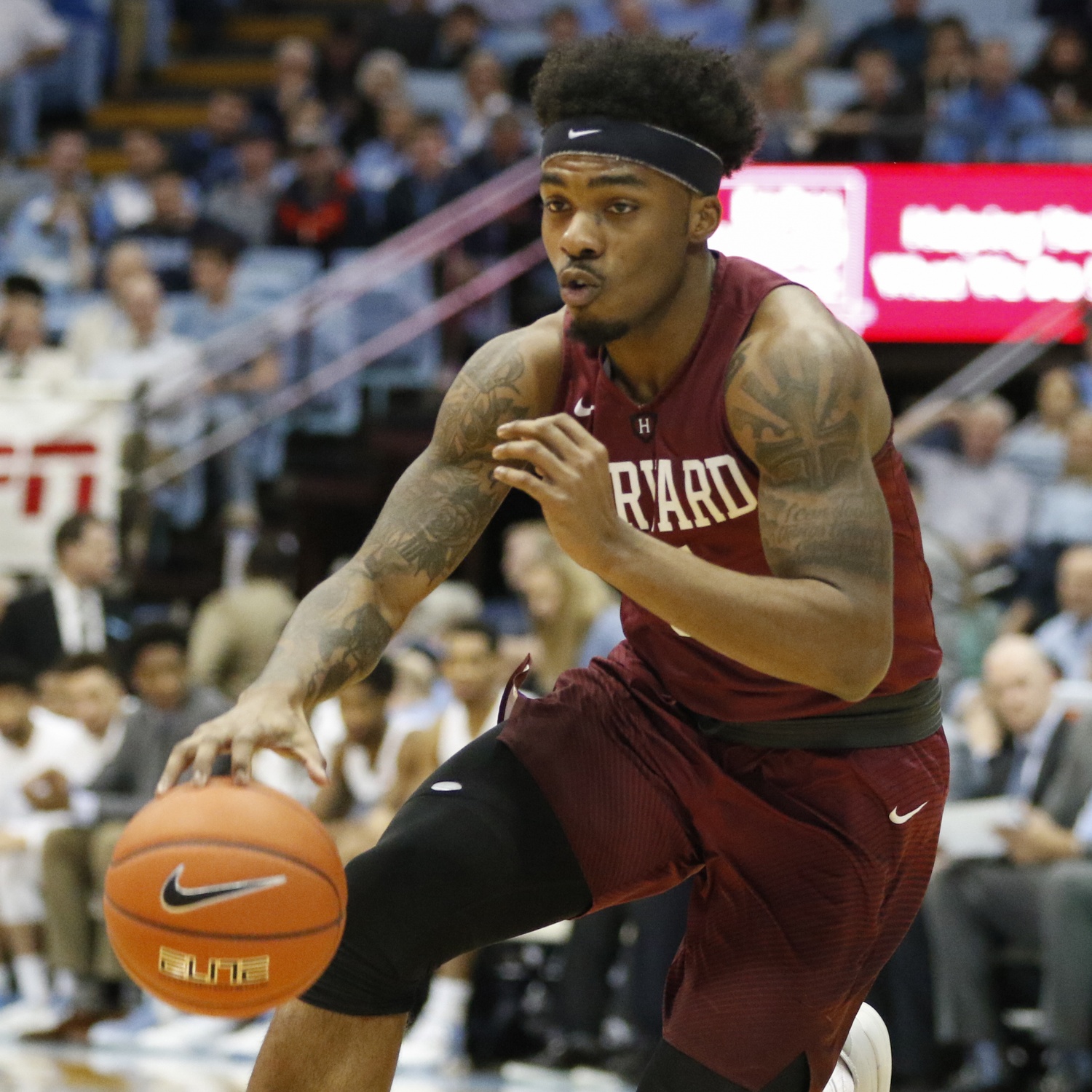 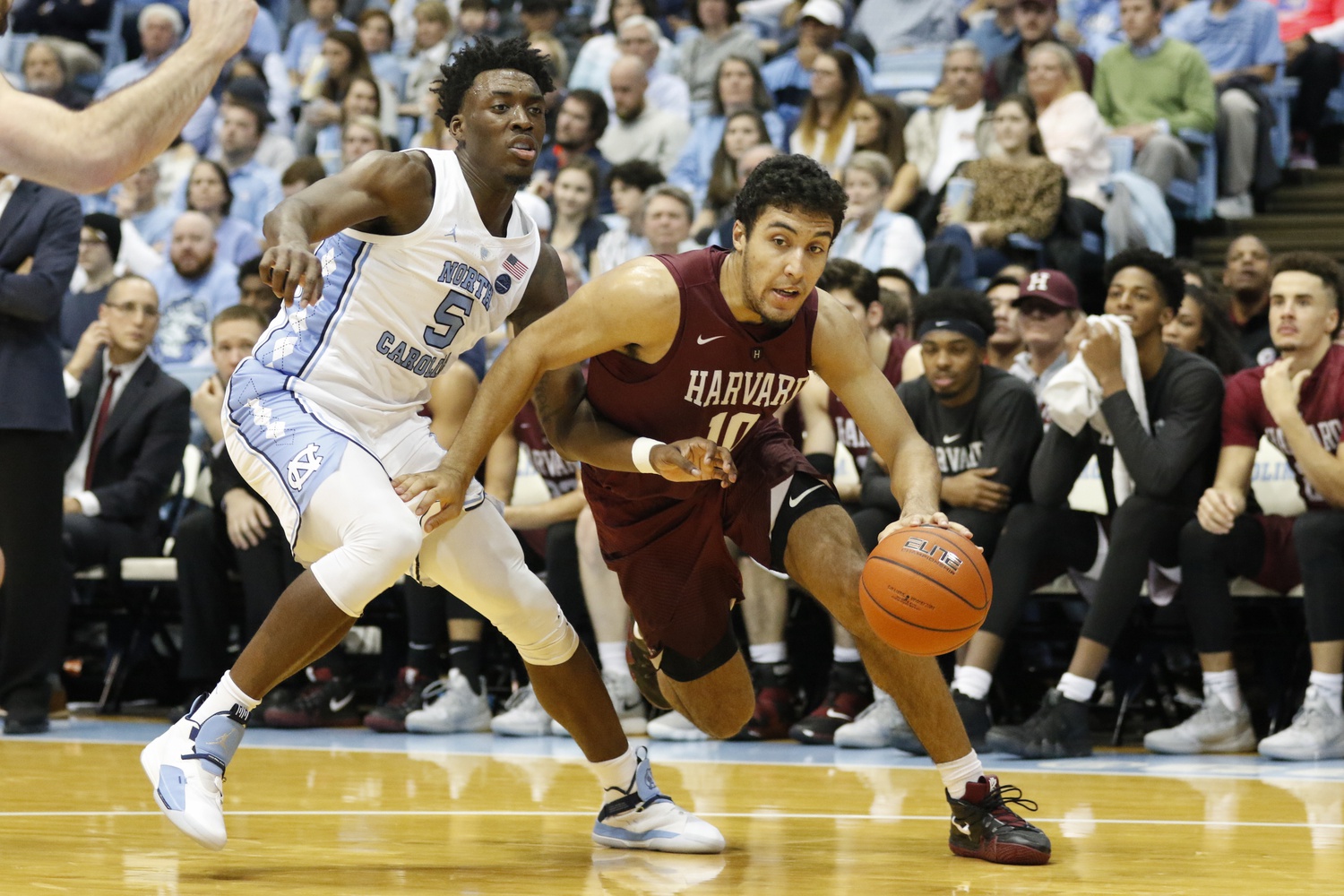 Outside of 10 points by junior Robert Baker, the Harvard bench was relatively quiet on the night with only Kirkwood and Forbes knocking in more than one basket. A brief 6-0 run heading into the final two minutes reduced the Tar Heels lead to 14 as the Crimson attempted to finish with a respectable line. 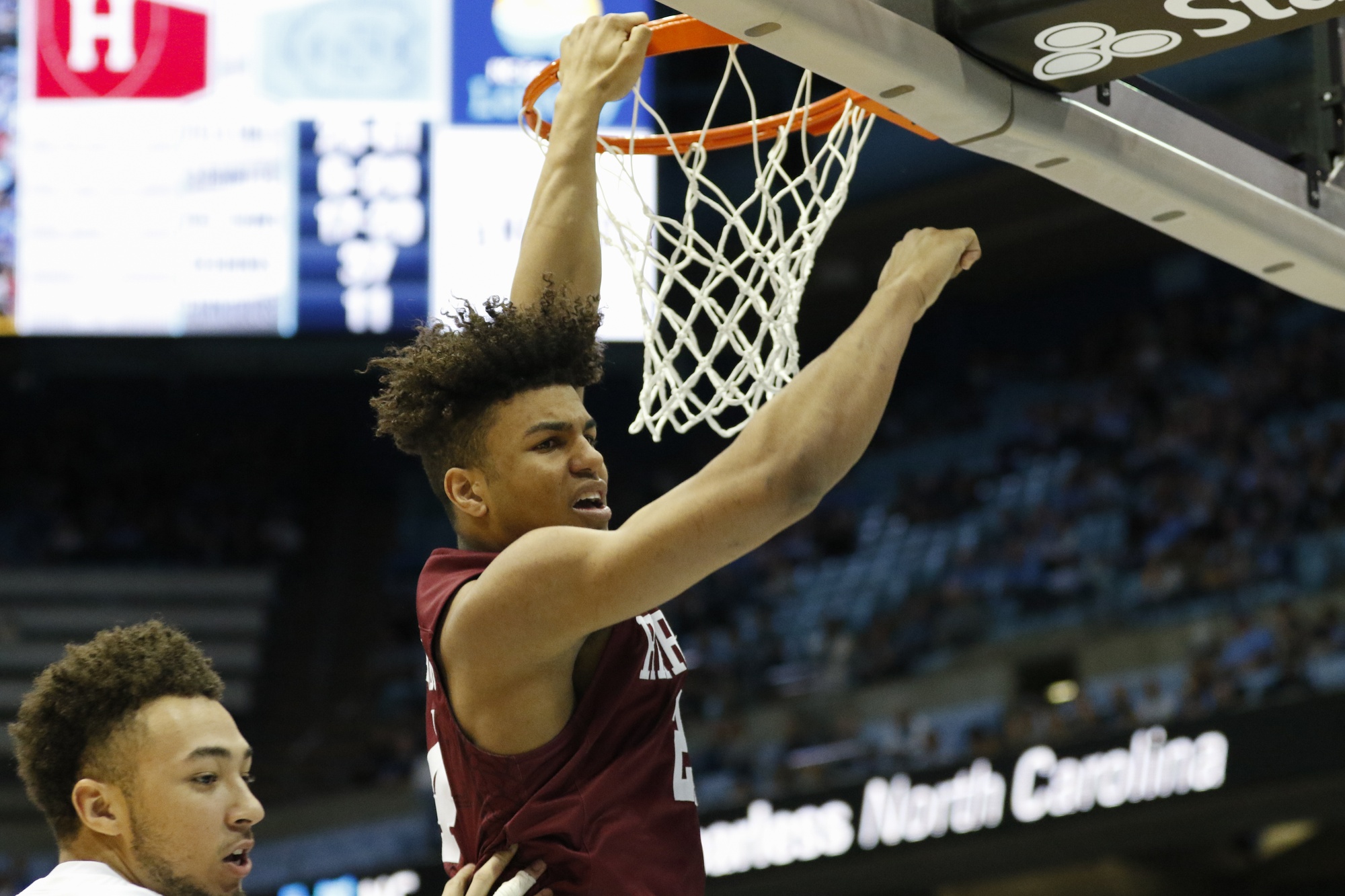 Final score: Tar Heels 77, Crimson 57. Harvard drops to an all-time record of 20-60 against current ACC opponents. The turnover count for the Crimson at the buzzer hits 22 and overall season mark at 204. 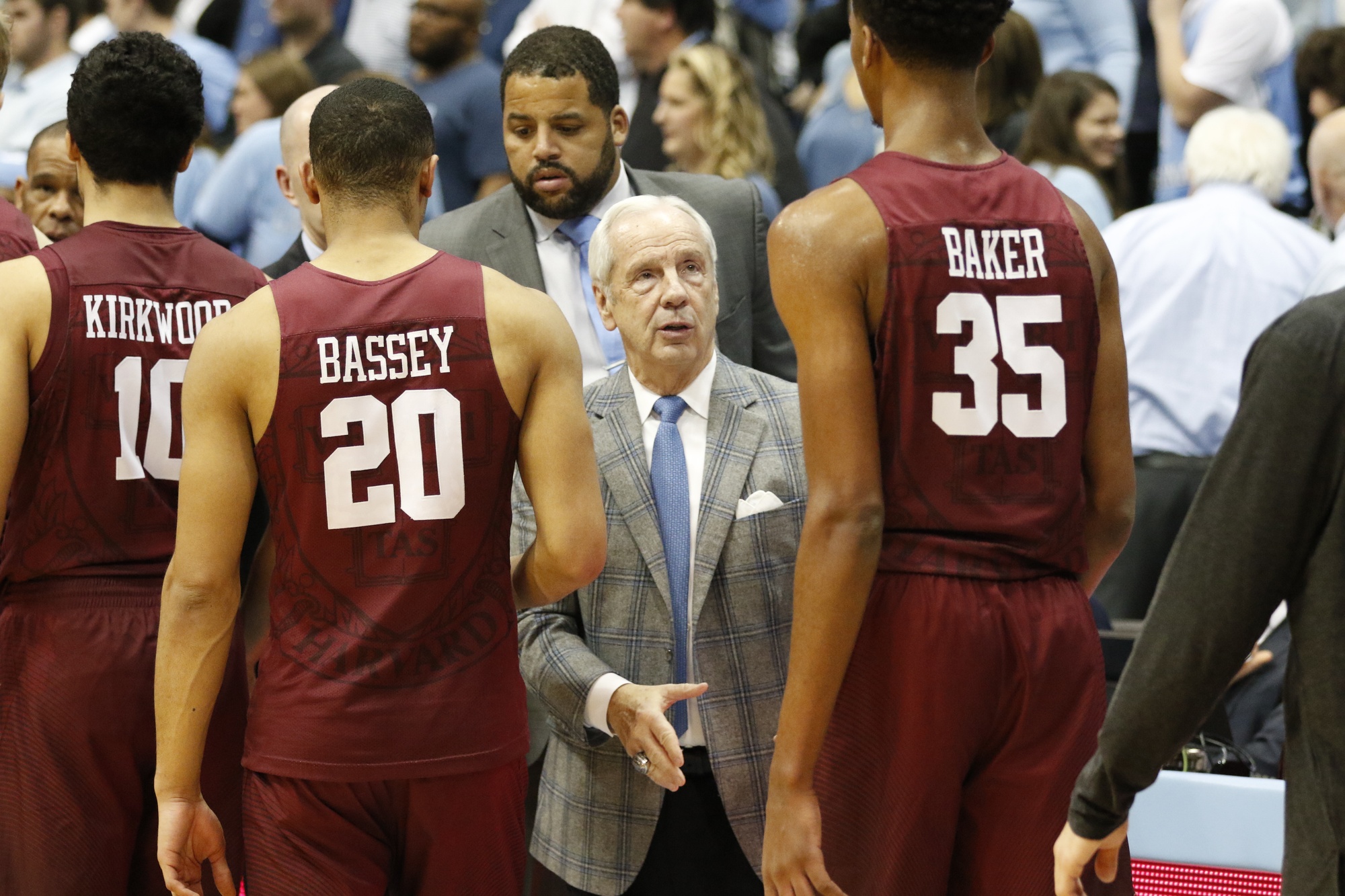 In a press room packed to the brim, Amaker addresses the media and reflects on his memories of Tobacco Road. Finishing .500 in non-conference play, the Crimson prepare for its Ivy League opening contest at Dartmouth on Jan. 12. 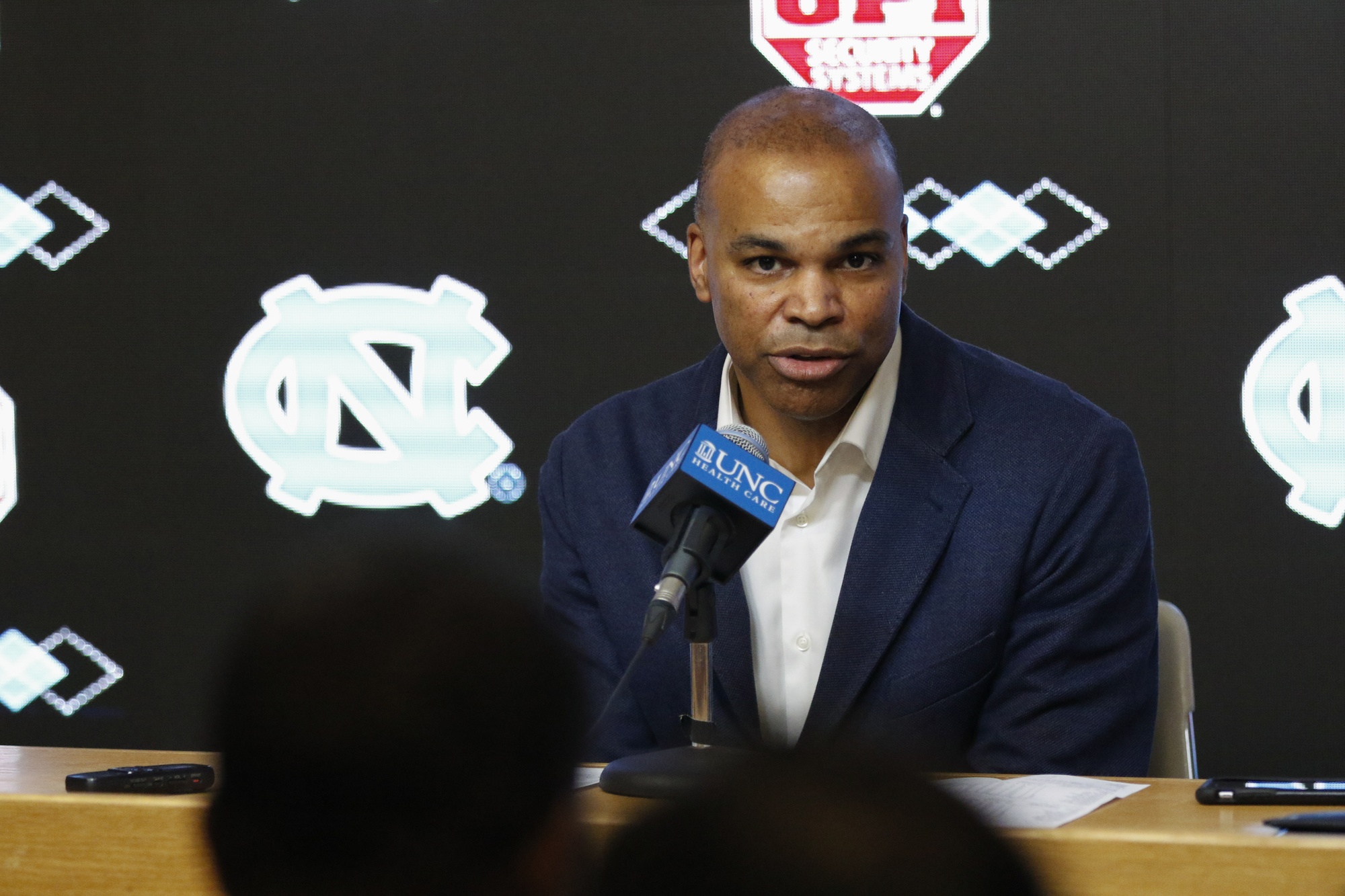