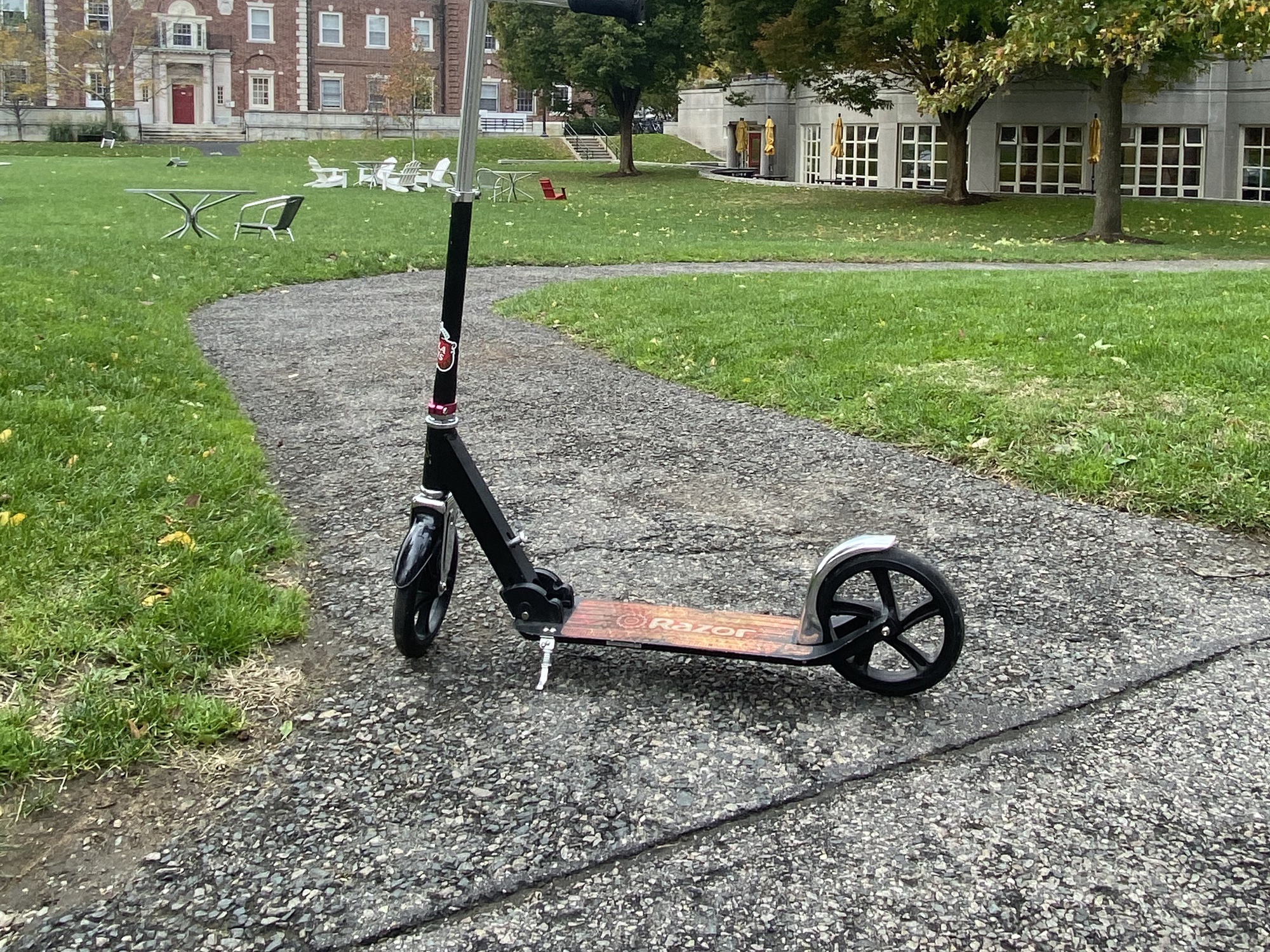 Upon walking into Annenberg, the first thing a freshman sees is a sign that reads, “Please park your SCOOTER at the back of the dining hall between the two statues. Thank you!” A look to the right and one sees an army of scooters parked against the back wall. It does not take long to figure out that the scooters mostly belong to athletes.

Although this is a new phenomenon on Harvard’s campus and the sign in Annenberg was just added this school year, the athletes claim they are useful for a variety of reasons. First-year men’s basketball player Idan Tretout says he mostly uses his for convenience, and that it will especially come in handy when it starts to get cold outside.

“Instead of a 15 minute walk, it’s going to be a four minute scooter ride,” Tretout said.

Tretout’s scooter is electric, so he expends minimal energy when he crosses the river to go to the gym. While only a couple of basketball players owned scooters when Tretout bought his in mid-September, now four players do.

While scooters are gradually becoming more popular on the men’s basketball team, men’s varsity heavy-weight crew is a different story. On a team where bikes are the common mode of transportation, first-year Tom Horncastle received his share of banter when he came to practice with a scooter. His teammates originally made fun of him and lightly threatened to slash his tires, and Horncastle does not really blame them.

“It’s almost as if it’s a kid’s toy used by big athletes, and so it’s kind of ironic in that sense,” Horncastle said. “Now they’ve kind of accepted it.”

Even so, Horncastle sticks with his scooter because he has valid reasons for owning one over a bike. He began the year with a knee injury, and a sophomore gave him a scooter for free to alleviate his knee pain and help him get across the river. Also, since bikes are more expensive than non-electric scooters, he figured a free scooter was an excellent deal.

Another member of the team even bought a scooter himself. Despite this, Horncastle recognizes that bikes are both faster and more durable in the snow, and he thinks that they’re probably a better long-term investment.

Scooters are evidently growing in demand, but some believe that they have more cons than pros. First-year men’s soccer player Galen Lewis uses a bike and argues that they’re the better purchase.

“You can’t lock up a scooter,” Lewis said. “There’s bike racks literally everywhere outside of any building on campus, so I just lock up my bike.”

Athletes with scooters have to carry the scooters into their classes. Lewis also says that scooters are not as helpful as they appear because they do not truly make crossing the river that much easier; they are only slightly faster than walking, while bikes save much more time and completely take the pressure off an athlete’s feet.

“If you’re playing a sport, scootering can actually make you pretty sore after a while,” Lewis said.

Lewis says the men’s soccer team is a mixed bag when it comes to transportation. He guesses that approximately a third of the team uses scooters, a third uses bikes, and the remaining third either uses skateboards or walks.

First-year Sarah Burn of varsity sailing purchased a non-electric scooter to alleviate her morning commute to team lift at 7:20 a.m. and attests to the fact that it’s a worthy purchase. However, she didn’t get the idea from her teammates, but from other freshman athletes. In fact, no upperclassmen on the team own scooters at all, but many of the freshmen do.

“In previous years, scooters weren’t popular with athletes,” Burns said. “First-year athletes are changing that, and maybe some upperclassmen will be joining that trend.”

Perhaps she’s right and every dining hall will soon have scooters parked against the wall, but for now, it’s Annenberg’s burden.