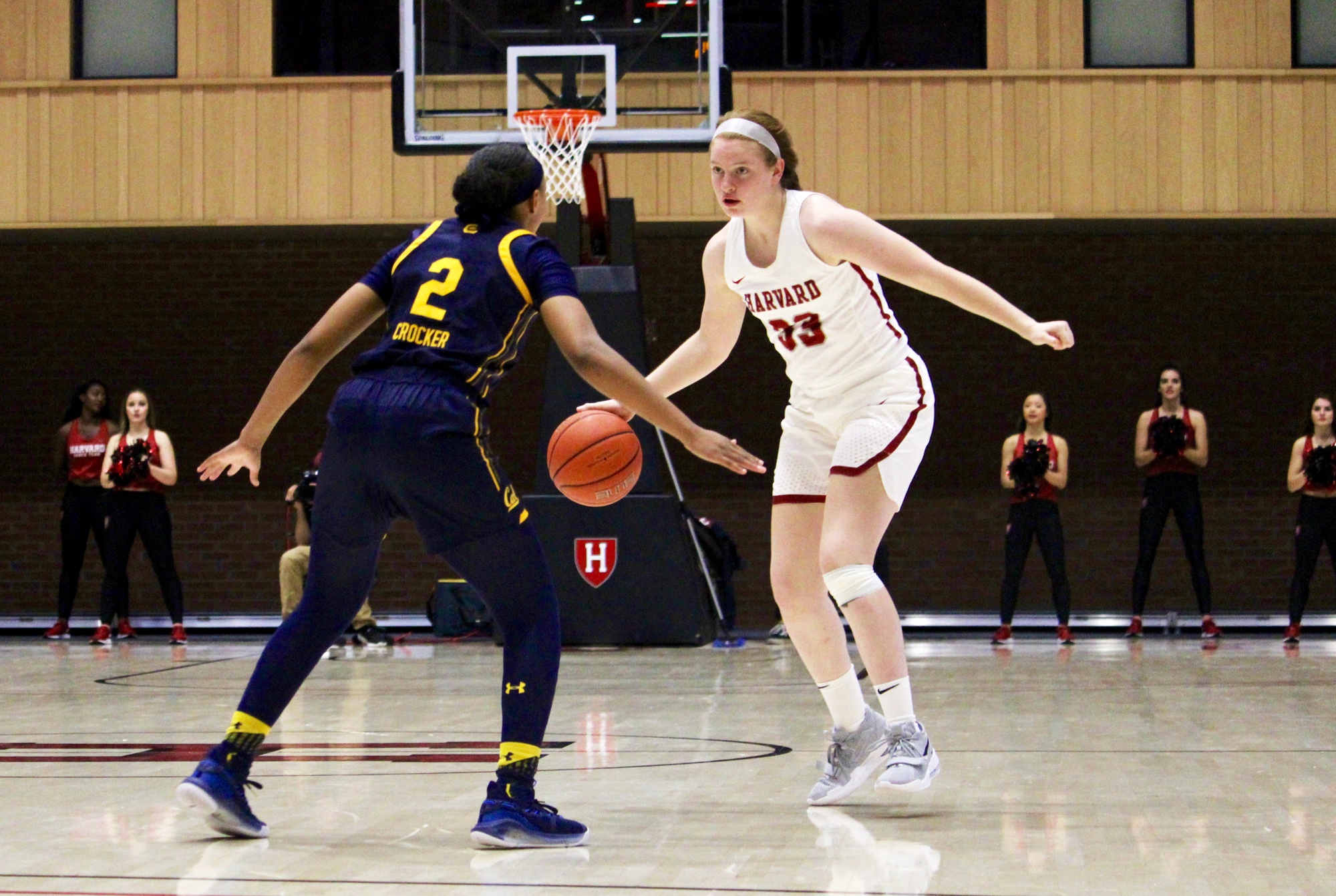 Freshman guard Annie Stritzel scored her first points for the Crimson and finished the game with 7 points. By Henry Zhu
By Ema R. Schumer and Mahtab Shihab, Crimson Staff Writers

Unselfish play paired with high-quality perimeter scoring propelled Harvard to a 68-51 trouncing over the Siena Saints on Tuesday night at Lavietes Pavilion.

Going into the game, the Crimson looked to continue its undefeated record coming off of a hard-fought victory against Cal in which Harvard erased a 10-point deficit.

Though the Crimson (3-0) was heavily favored against the Saints (0-3), defending its home court looked difficult without the services of first-year guard and reigning Ivy League Rookie of the Week Lola Mullaney. Mullaney, who sprained her ankle in Friday’s game against Cal, averaged nearly 20 points in her first two games for the Crimson. Coach Kathy Delaney-Smith said that Mullaney’s status remains unclear.

“Lola’s a great player. She’s a great scorer for us, but I think we have a great team. We have people on the bench that can step in for her,” sophomore guard Maggie McCarthy said. “We miss her obviously but we definitely have different components to our team.”

“This may be one of the strongest freshman classes I've ever had,” Delaney-Smith said. “I couldn't be more pleased with their work ethic and their ability to learn the system.”

Offensively, Harvard outmaneuvered Siena’s 2-2-1 press. In the back court, Crimson guards kept their eyes up and passed the ball over their defenders. Harvard swiftly moved the ball around the perimeter and found gaps in the zone defense, frequently scoring in non-contested situations. The Crimson distributed the ball well throughout the game, assisting on 20 of its 26 baskets. Harvard shot 40.6 percent from the field, and 35.7 percent from three point range.

The game did not begin well for the Crimson, however. Four minutes into the game, Harvard trailed 7-2. An offensive rebound and putback by senior forward Jeannie Boehm snapped the Saints’ scoring streak and ignited an 11-0 run for the Crimson, during which Sussman scored six points. By the end of the first quarter, Harvard led 13-7.

Harvard built on its lead in the second quarter. In a prolific scoring performance, the Crimson added 24 points to the scoreboard. Harvard’s adept shooting was complemented by its tenacity on defense. Playing man-to-man, the Crimson conceded only four points to Siena in the quarter, so that the visitors went into the locker room at halftime with only 11 points scored.

Harvard’s man-to-man defense held Siena’s dominant scorer, senior guard Sabrina Piper, to only three points in the first half. In Siena’s previous game, Piper scored 21 points against Penn, despite losing to the reigning Ivy League champion 92-44. Against the Crimson, the Paris, France native finished with 15 points.

Trailing by 20 points, Siena came out in the second half with a sense of urgency. The Saints’ intensity on offense seemed to frazzle Harvard players, who rendered a lackluster defensive performance. In the second half, the Crimson allowed 40 points, getting outscored by nine.

Despite the 17-point victory, Delaney-Smith was not impressed with her team’s performance.

“We should have done a better job on the defensive end,” Delaney-Smith said. “I just think this was a whole mindset game...and that’s very upsetting. That’s very dangerous in the Ivy League.”

Harvard’s undefeated record will be challenged on the road this weekend as it continues its non-conference slate against La Salle on Friday at 7 p.m. and Rutgers on Sunday at 2 p.m.