Men’s Basketball Edges Past Siena to Remain Perfect at Home 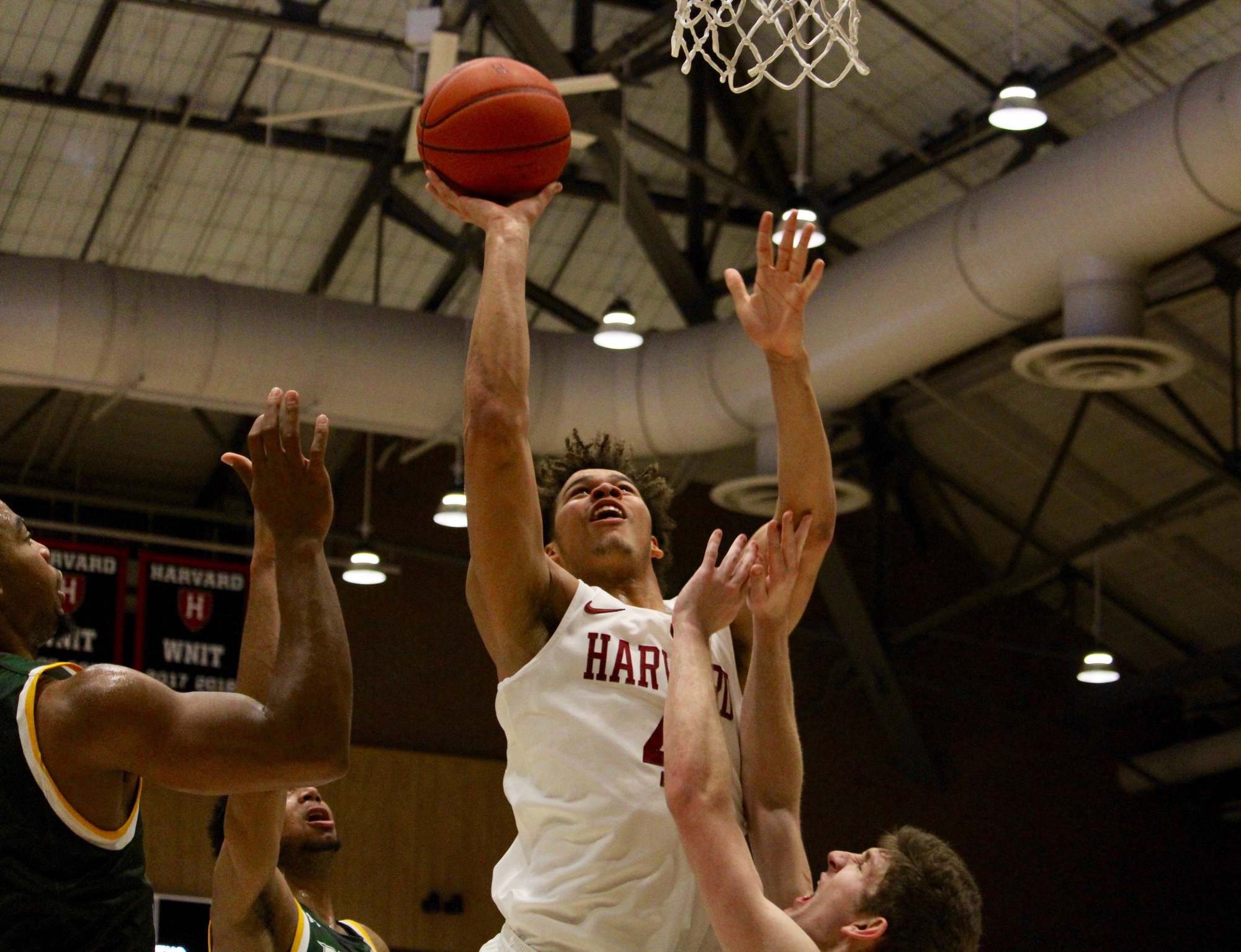 Freshman Chris Ledlum drives to the basket on what would become a career-night. By Henry Zhu
By David Manikas, Crimson Staff Writer

In a tightly-contested finish that was decided by a missed three-pointer, the Crimson edged out a narrow victory over Siena despite being without Noah Kirkwood, Bryce Aiken, and Seth Towns.

The Crimson (3-1) looked to build off of a comfortable win against Maine on Sunday with a victory over Siena (2-2), led by sophomore guard Jalen Pickett — the preseason MAAC player of the year returning to play for the Saints after declaring for the 2019 NBA draft following his freshman campaign. Generating notable interest from NBA teams, Pickett attracted several NBA scouts to Lavietes to watch Thursday’s contest.

The trend of slow offensive starts for the Crimson continued tonight, as Harvard found itself down 15-7 early against a Siena team led by sophomore Donald Carey, who started the game perfect from the field scoring eight points in the first six minutes. Pickett, on the other hand, struggled in the opening minutes, going 0-3 from the field while facing tough defenders in junior Rio Haskett and senior Justin Bassey. After picking up two quick fouls, he found himself a place on the bench for the remainder of the half.

Looking for an offensive spark, coach Tommy Amaker went to his bench early, playing a total of 10 players in the first 10 minutes of the half. Immediately, he found one in freshman Chris Ledlum, who came in sinking triples in three consecutive possessions after not hitting a single one in his first three collegiate appearances.

The freshman continued his hot start throughout the first half, scoring a career high 14 points in only eleven minutes on the floor. With 52 seconds to go in the first, however, Ledlum came down grabbing his ankle in transition. Although he came back after halftime, he played limited minutes in the second half and did not add to his point total.

“We don’t win tonight if he doesn’t have that kind of first half and give us confidence,” Amaker said. “We got down early and he was able to come help dig us out.”

The frequent substitutions allowed multiple players to contribute offensively, leading the Crimson to pick up the scoring towards the end of the half. Contributions from freshmen Idan Tretout and Luka Sakota and junior Danilo Djuricic off the bench added to the three point shooting by Haskett and Bassey. Harvard finally began to find its groove, ending the half on a 13-4 run to go up 37-30. 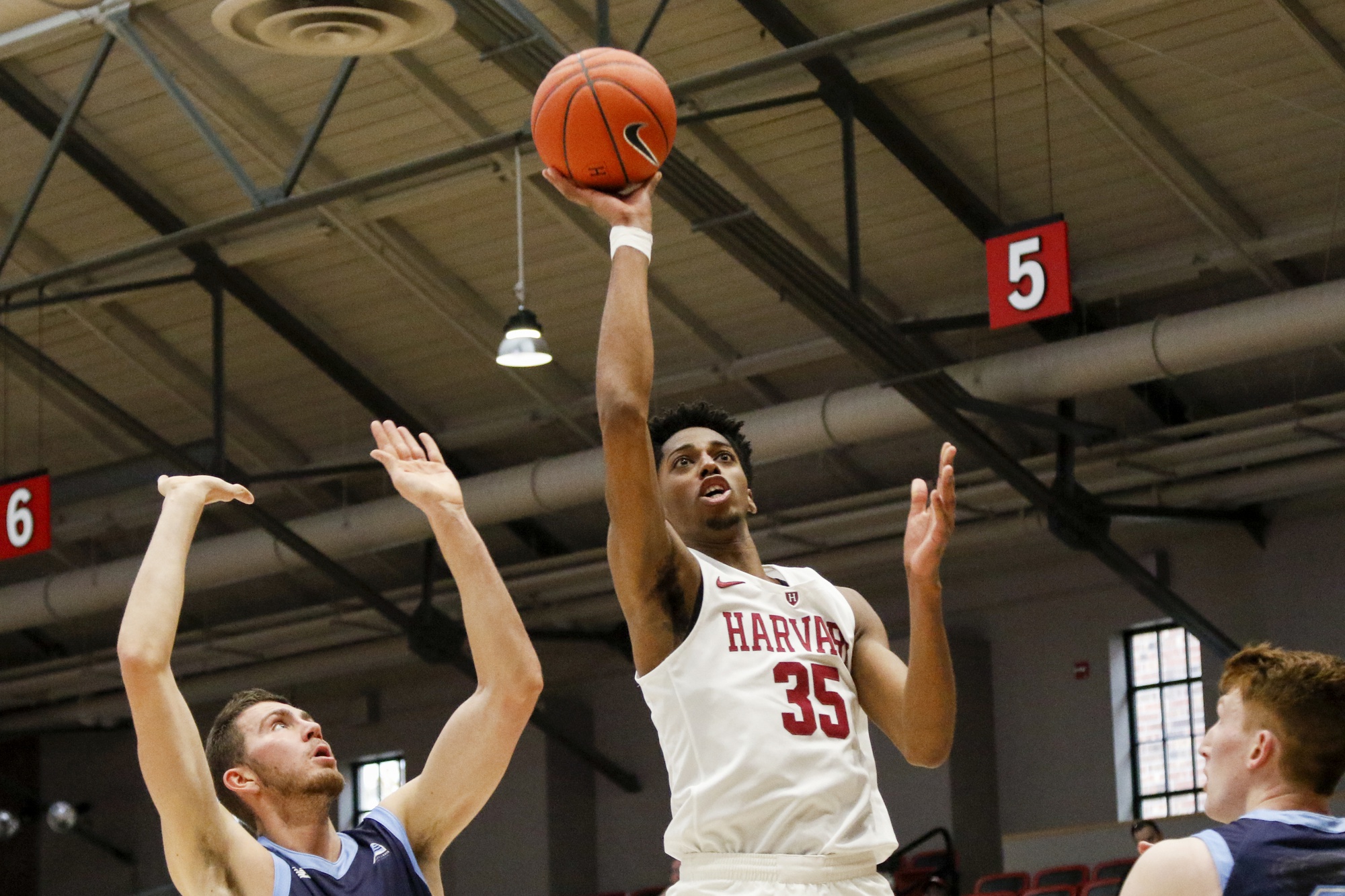 In the absence of some key players, senior Rob Baker has cemented his role in the starting lineup. By Timothy R. O'Meara

The Crimson’s hot end to the first didn’t carry over into the second, however. Sparked by its riveting crowd, Siena began to nag Harvard defensively and generate points off of turnovers. To deal with yet another slow start to a half, Amaker stuck with his original plan, rotating players often to create points. Among these substitutions was captain Henry Welsh, seeing his first action of the season. Playing four minutes in his first game back, Welsh scored in the paint on his only attempt of the night.

Pickett’s woes continued into the second half, as he continued to struggle shooting from the floor. His first points came in the paint with five minutes to go in the game, which he followed up on the next possession with another bucket to keep Siena in the game. The Rochester, N.Y. native finished the game with four points, shooting 20 percent from the field.

The Siena fan section erupted in response to Pickett’s first points, changing the atmosphere in Lavietes to what felt like a road-game atmosphere for the Crimson. Feeding off its crowd, the Saints quickly worked their way back from a seven-point deficit, scoring six straight points including a layup by senior forward Sammy Friday with 46 seconds to go to cut the lead down to one.

After senior Chris Lewis was called for a travel in the paint, Siena found itself with a chance to take the lead. With the shot clock turned off and everyone on their feet, the ball found itself in Carey’s hot hand.

Guarding him was Haskett, who was looking to get one more stop after a game of intense defensive pressure on the Saints’ top scorers. Haskett stayed in front of Carey diligently, forcing the Siena guard to put up an off-balance three with time winding down that missed the mark.

Senior guard Christian Juzang’s two made free throws iced the game for Harvard, which extended its home game win streak to three as the contest ended with a score of 59-56. Although it wasn’t pretty, the close finish was certainly a crucial learning experience for a team loaded with young talent.

“Being in a game where you have to grind it out...that’s huge, especially for our younger guys who haven’t been in those situations,” said Bassey. “Those sorts of moments are really helpful to get in early and have an opportunity to learn to be able to handle those situations when they come down to the Ivy League tournament.”

Ahead for the Crimson is a trip up north to play in Scotiabank Arena in Toronto, where it will face off against Buffalo in the James Naismith Classic on Saturday.