“One thing I really try to avoid, especially when it comes to this part of the year is trying to stress too much or think too much about it,” said McPartland.
By Eliot Min 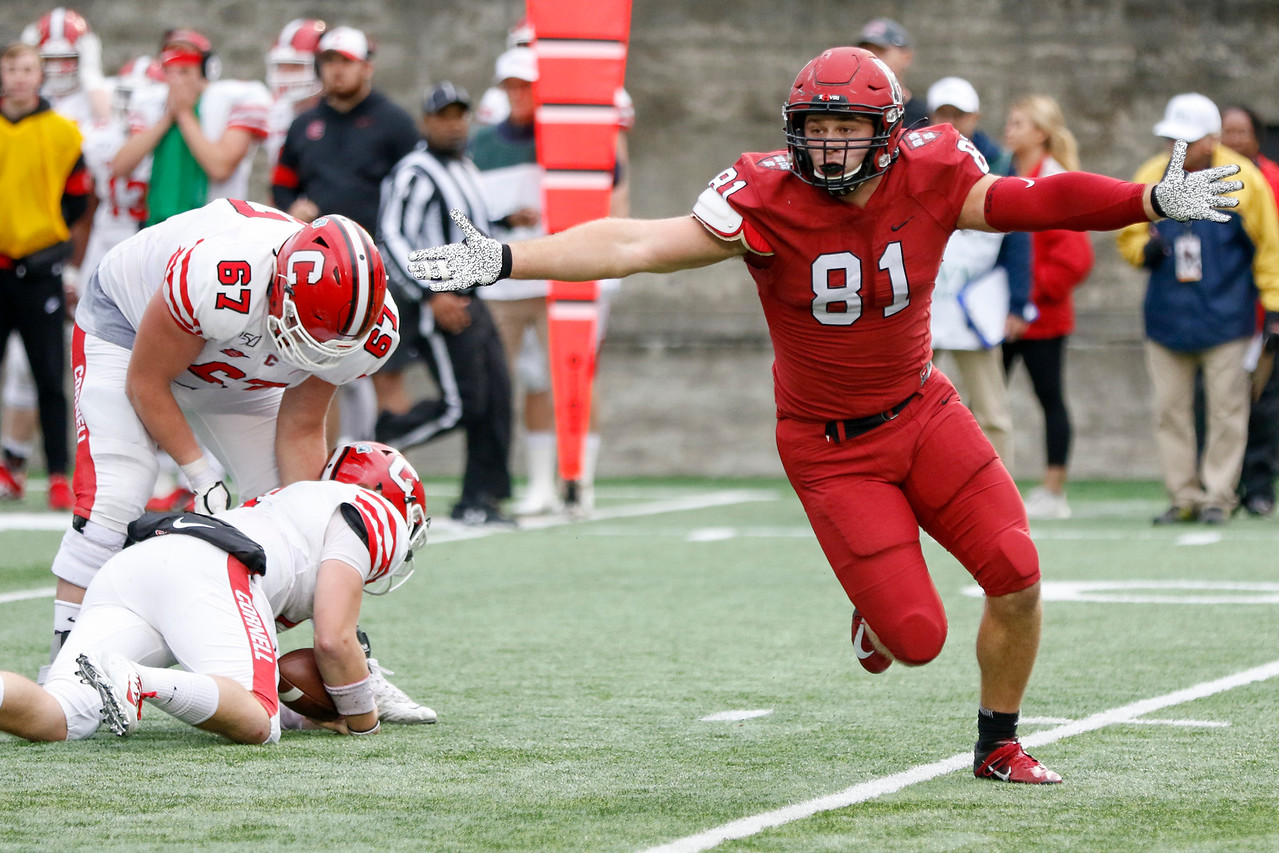 Senior Brogan McPartland celebrates after a sack against Cornell earlier this season. By Timothy R. O'Meara

“We joke around, we have a lot of fun with each other, we hang out with each other outside of football. So I feel like that's the type of stuff that I'm definitely gonna remember the most.”

Hailing from Stephens City, Va., senior defensive lineman Brogan McPartland has had the opportunity to reflect on his football career at Harvard in advance of the annual Harvard-Yale matchup. The scoring sheets display McPartland’s many tackles and quarterback hurries across his four years on the team — but they do not show the lifelong friendships McPartland has made through football, an aspect of the sport that he cherishes the most.

Just like he emphasizes the friendships he forms through football, McPartland also places importance on the mental aspect of the game. On the cutthroat and rigorously challenging football team, McPartland has maintained an easygoing attitude. He credits his ability to stay loose during practices and games as a crucial factor for success on the squad.

“One thing I really try to avoid, especially when it comes to this part of the year is trying to stress too much or think too much about it,” McPartland said. “I'm just trying to come up with some focus on practice, focusing on [our opponent’s] schemes, things like [what] to expect, but overall, outside of here, I'm trying not to think too much about it [and] just go out there.”

McPartland’s calm and collected attitude towards football has had a tremendous impact on the rest of the football team. During his time on the squad, McPartland has led by quiet yet stellar example, according to Head Coach Tim Murphy.

“Yeah, Brogan's not one of those guys to, you know, get some up on the bully pulpit,” Murphy said. “He's a relatively quiet guy. But his competitiveness, his work ethic, and ultimately his high level of plays [as] a huge motivator. I think for the younger players, it's given our defensive team a tremendous amount of output in energy.”

This weekend will mark McPartland’s final game at Harvard — but it is also the final game of his football career, one that began long before his time with the Harvard football team. Football was a fixture in McPartland’s life as he grew up, and he faces his imminent retirement with both nostalgia and excitement.

“I've been playing football since I was [10] years old. I mean, this has been something I've been doing my entire life,” McPartland said. “Somebody going on 12 years now of doing this realizing that, you know, in a couple of days it's going to be over... it's a weird feeling. It's exciting in a way, a new chapter in my life. It's something of course I'm gonna miss — you don't do something for 12 years unless you're really, really passionate about it.”

In his final chapter, McPartland looks to lead Harvard football to a victory in its annual tilt against Yale. Harvard has split its last two matchups against Yale, falling 24-3 in 2017 but rebounding with a 45-27 trouncing last year. This year, the match will take place on Yale’s home turf on Saturday at noon. In his final game on the squad and perhaps Harvard’s biggest matchup of the season, McPartland will look to leave his mark on a team that has given him so much over the last four years.

“[Playing at Yale is] going to feel nostalgic, especially because I haven't played there [since] two years ago,” McPartland said. “Being a senior knowing this is my last game right now, and the season hasn't exactly gone the way we expected, [we] aren't exactly in the position we'd like to be at this point. [But it] hasn't changed the fact that [it’s] a huge game. It's our biggest game of the season. Overall, I think as a team, we're just really pumped up to get this opportunity, especially going back there after we [lost] two years ago.”