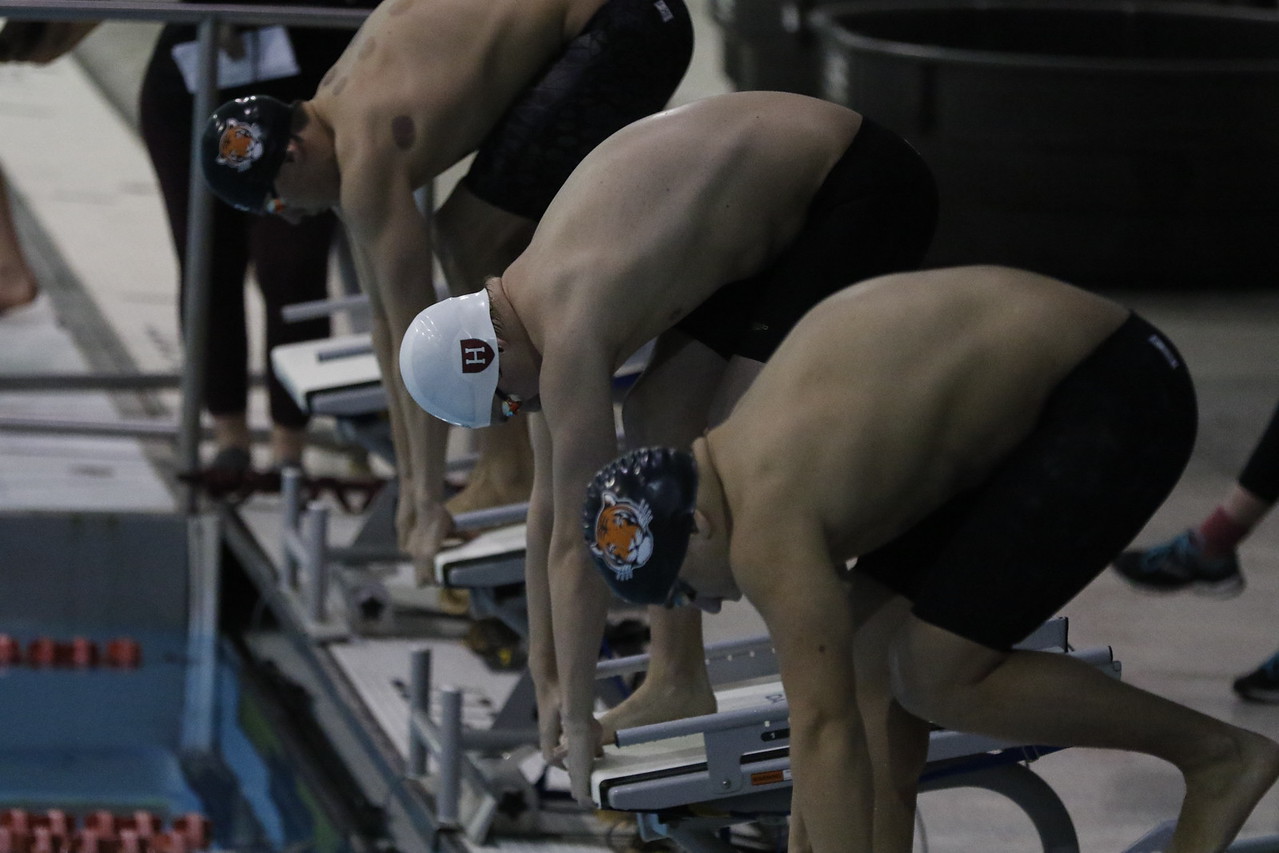 Harvard Cruised by Cornell and Dartmouth in its first Ivy League meet of the season By Timothy R. O'Meara
By Nicholas Daley, Contributing Writer

Harvard men’s and women’s swimming and diving each bounced back from losses in their opening meet to defeat Dartmouth and Cornell this past Saturday on Dartmouth’s campus in Hanover, N.H.

A week after opening its season with two losses to Duke and No. 7 Texas A&M, Harvard men’s swimming (2-2, 2-0 Ivy) topped the two Ivy League opponents in a performance that showed why the Crimson is the three-time defending Ivy League champion. Harvard barely broke a sweat on its way to a 185-113 victory over the Big Red (2-1, 1-1 Ivy) and a 193-105 takedown of the Big Green (0-4, 0-2 Ivy), thanks in large part to a trio of record-setting performances.

First to rewrite the record books was Harvard’s 200 yard medley relay team of first-year Will Grant, captain Daniel Chang, sophomore Umitcan Gures, and junior Mahlon Reihman, who touched the wall over 2 seconds ahead of the nearest opponent, tying the pool record of 1:30.47 set by another Harvard relay squad in 2016.

Grant and Gures then did some record breaking on their own. Grant gapped the field by almost 3 seconds in the 200 backstroke, posting a new venue record at 1:46.48. Gures broke the facility record en route to his victory in the 100 fly, stopping the clock at 48.17 and removing one record from the long list belonging to Harvard senior Dean Farris.

Harvard captured victories in nine of the fourteen swimming events on the day. Freshman Marcus Holmquist won the 200 freestyle, Grant picked up another first in the 100 back, as did Chang in the 100 breast. Jared Simpson won the 200 breast, first-year Cole Kuster took the top spot in the 500 freestyle, and the Crimson finished the meet with a victory in the 400 free relay with a team of Kuster, Gures, Reihman, and sophomore Ryan Linnihan.

The meet was a dominant and promising return to the winning column for the Crimson. After finishing eighth in the country last March at the NCAA championships, Harvard knew this season would come with adjustments due to the loss of key seniors and the season-long absence of Farris: Harvard’s American record-holder and national champion who decided to take a year off to train for the 2020 Olympics in Tokyo. But Harvard, who has become somewhat of a national powerhouse in recent years, may have found a new star in Grant, who helped set a World Junior Record in the mixed 4x100 medley relay this summer and was named to the US Junior National Team in September.

The women also broke three pool records on the day. The first came in the 200 medley relay, in which the quartet of first-year Adaline Rose Bullock, senior Mei Lynn Colby, junior Kennidy Quist, and first-year Felicia Pasadyn finished in 1:43.13.

Pasadyn followed up her anchor leg by shattering the venue record in the 200 butterfly with a 2:00.10, over a second faster than the previous best time and over two seconds faster than the 2nd-place finisher.

The defending Ivy League champion wrapped up the meet with its final record in the 400 free relay. Pasadyn once again was a part of it, taking the team out hard in the first leg before senior Miki Dahlke, Colby, and sophomore Samantha Shelton brought it home for a 3:24.71.

The Crimson next hit the water on Friday at Columbia, where it looks to preserve its unbeaten record in the Ivies.