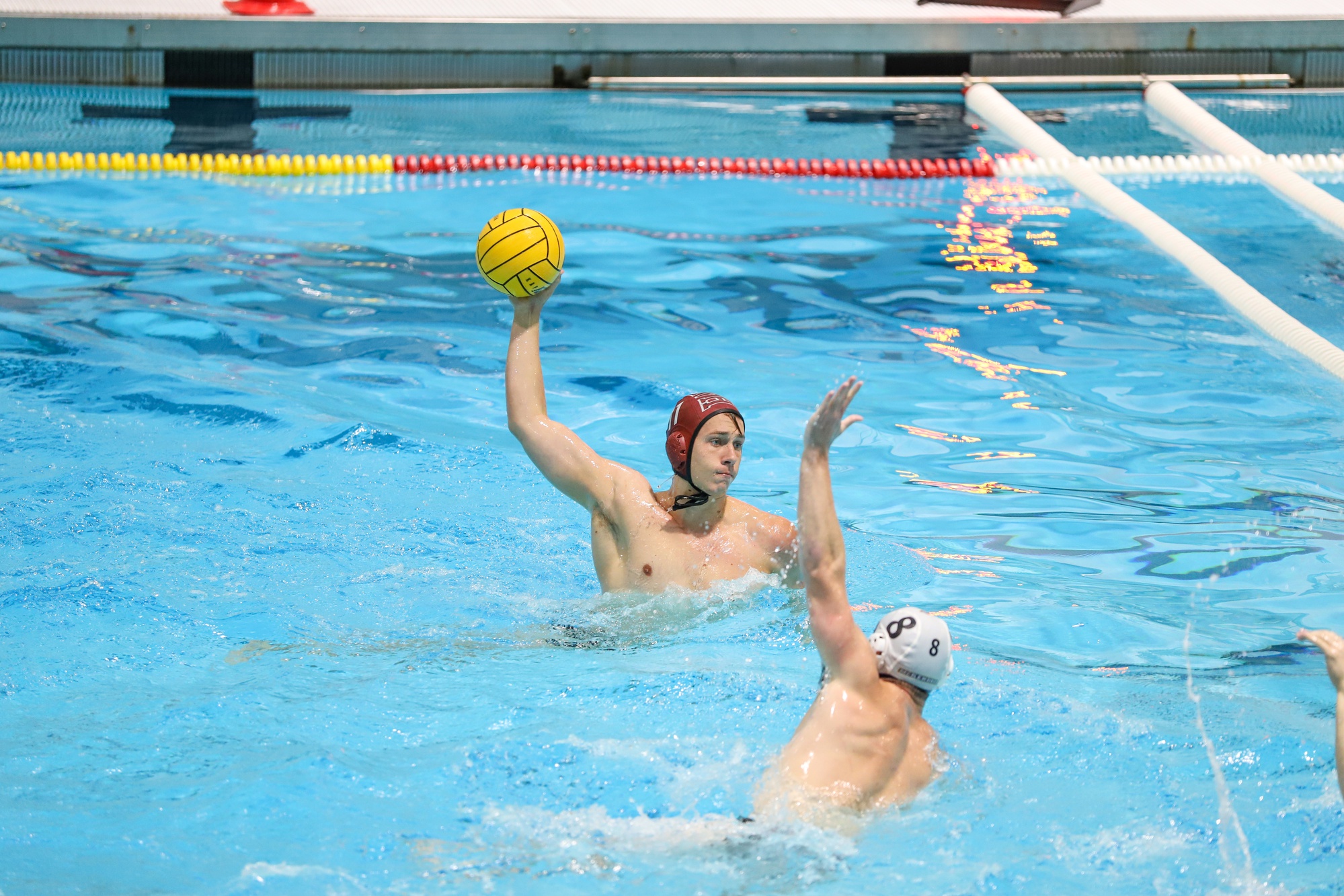 The Crimson will face No. 13 Bucknell in the first round of the NCAA Tournament. By Timothy R. O'Meara
By Zing Gee, Contributing Writer

Harvard men’s water polo has been an undisputed force to be reckoned with this fall, and time in and time out it pulled off big wins in close games. — five of the Crimson’s twenty-nine victories have been by just a single point margin of victory.

Now it is the first team to go undefeated in the Northeast Water Polo Conference regular season and tournament, with a historic 29-0 record.

“This season we’ve tried to play with a ‘shark mindset’ every day,” senior co-captain Charlie Owens explained. “Competing with a high intensity at practice made it easy to translate that focus to game days.”

Harvard earned a national rank of No. 9 by the end of the regular season, with the eight teams ranked above them are all based in California, considered the hub of American water polo. The Crimson consistently knocked off other ranked opponents throughout the regular season with wins against No. 9 UC San Diego, No. 14 & 15 George Washington (twice), No. 17 Pomona-Pitzer, No. 18 Princeton, No 17. St. Francis, and No. 14 Bucknell.

The Crimson’s thrilling 8-7 triumph over No. 19 Princeton this past Sunday secured a trifecta of the Northeast Water Polo Conference Championship, head coach Ted Minnis’s 200th career win with the program, and an automatic bid to the NCAA tournament. The win came after a fourth quarter penalty shot from sophomore Alex Tsotadze.

Owens was named the Northeast Water Polo Conference MVP prior to the conference tournament this past weekend, in which Harvard bested St. Francis 15-9 in the semifinals on Saturday before matching up against Princeton the following day — a rematch of the previous year’s title game, in which the Crimson fell to Princeton 10-12.

This season has also seen the Class of 2019 become the winningest class in program history, with 108 wins over the last four years as of the conference final. The Crimson are also the first conference No. 1 seed to win the NWPC championship.

The Crimson are set to face No. 13 Bucknell in the first round of the NCAA tournament this Saturday, November 30, here at home in Blodgett Pool. Earlier this season, on October 20, Harvard defeated Bucknell 9-8.

“Our focus is simply perfecting everything that we’ve done and worked on so far this season,” Hodge said. “We know that Bucknell is a strong team who will give us their best swing, but if we play our game the way we have all season and focus on things we can control, we fully believe that we’ll come out on top.”

The Harvard goalkeeper delivered thirteen saves in the conference final against No. 19 Princeton, adding to his season total of 243, now the third most all-time in a single season for the program.

The team’s last appearance in the tournament came in 2017, when it made it to the quarterfinals, and 2016 when they reached the Final Four. The winner of Harvard versus Bucknell in the first round will play reigning national champions USC in the quarterfinal, who finished the regular season tied at No. 1 in the rankings with Stanford. Given how the seven-team bracket is structured, Harvard and Bucknell have the only first round matchup, while the rest of the tournament is played from December 5-7 in Stockton, CA.

As the first round begins over this Thanksgiving break, that “shark mindset” will be as essential as it has been all season.