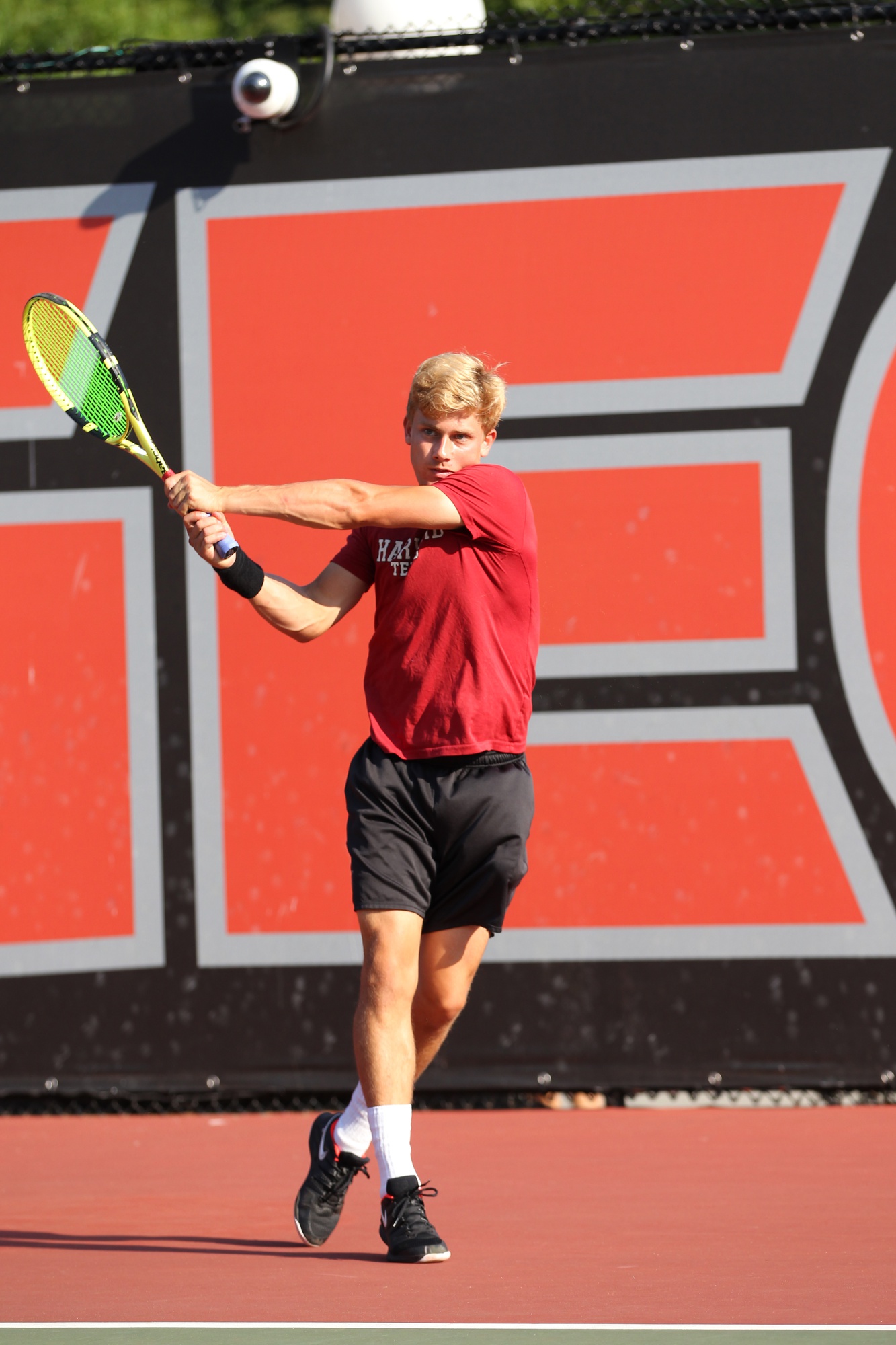 Junior Lane Leschly follows through on a backhand for Harvard Men's Tennis, a team he shares with his brother, Bo
By Isabel A. Levin, Contributing Writer

What’s it like coming from a family of super athletes?

Both junior Lane Leschly and sophomore Bo Leschly play varsity tennis at Harvard. Their grandfather, Jan Leschly, played professionally for Denmark. Their father, Mark Leschly ’90, also played for the Crimson. Their uncles Jake, Stig, and Nick all played tennis at Princeton. Their cousin, Kayla ’23, plays tennis at Harvard as well, while her twin sister Jayme plays at Princeton.

With so much tennis experience in their family, it was only natural for Lane and Bo to play the sport.

The Leschlys grew up in Atherton, California. Lane, the older brother, began playing tennis at the age of five and immediately fell in love with the sport. He acknowledges that his family’s tennis background “could be perceived as a lot of pressure,” but overall feels that “it was an unreal and amazing environment to grow up in. [It was] a great opportunity to develop as a tennis player.”

As a young player, Lane loved training with his family and receiving coaching advice from them. His father’s success inspired him to make ambitious goals for the future.

“There’s always the dream to play at college, and I always wanted to play at Harvard when I was younger,” Lane recalled.

When he was 10, Lane would show up at tennis practices at Stanford wearing Harvard gear. He laughingly mentions his youth coach making fun of him for wearing his father’s old Crimson vest. Today, he emphasizes the importance of taking a step back and appreciating one’s accomplishments.

“We always get so psyched up about what the next goal is that we never really take time to step back and appreciate what we have accomplished,” Lane observed. “It’s unbelievable thinking, wow, that was my childhood dream.”

Bo also started playing tennis at a young age, and his brother’s love for the sport inspired him.

“We grew up playing together,” Bo recalled. “There’s that [age] gap, obviously growing up he was a little bit better. He pushed me.”

The Leschly brothers attended Menlo High School. Despite their age difference, the two played on the same high school team and sometimes competed together in local tournaments. Both excelled at tennis. Lane was recognized as a high school All-American in 2015 and played in the Australian Open Juniors qualifications round in doubles in 2016. During his high school career, his team won three consecutive WBAL, CSS, and NorCal Championships. Bo also played on the 2015 team, and his team won the CSS and NorCal titles again in 2018. He was named to the National High School All-American Team Invitational All-Tournament team in 2018 after leaving his high school to an undefeated season.

Junior Lane Leschly follows through on a backhand for Harvard Men's Tennis, a team he shares with his brother, Bo By Courtesy Photo

After successful high school careers, collegiate tennis was a natural next step for both Lane and Bo.

“[Playing in college] wasn’t the goal per se growing up,” Bo said. “[But] it was definitely more the goal coming in towards middle school and then high school.”

When asked whether Lane playing for the Crimson affected Bo’s decision to commit, the younger Leschly responded simply, “yeah.” Having a sibling who plays the same Division I collegiate sport is incredibly rare, and being able to play on the same team with them is an even more unique experience.

“Having him on the team, getting to play with him, and having that bond [of] being family [and also] being teammates is something very special,” Bo stated.

Lane feels similarly. “Having [my] brother there makes it another level of fun,” he said.

Tennis is often a pretty individual sport, and both Bo and Lane emphasize how the incredible team dynamics enhance the game.

“In college when you actually play on a team, it’s very, very different [from high school] and very rewarding because normally when you’re playing tennis, you’re all alone,” Bo explained. “Having a team there to help you in college is inspiring and keeps you moving forward.”

Being on the same team helps keep the Leschlys connected.

“I see [Lane] every day,” Bo said, “which is something that’s great to have especially when I’m at college and, you know, you don’t see family that much.”

Cambridge is a long way from California, and having family close by makes it easier to stay connected.

Lane added, “Being on the Harvard team with him is a great opportunity to make sure that we stay in touch as siblings. I get to see him every day which I’m so grateful for.”

Lane also acknowledges that, in addition to being at the same school, being on the same team makes it easier for the brothers to see each other. College students often have hectic schedules, and many of Lane’s friends have to set dates just to see each other every week. Luckily, Lane and Bo don’t have to worry about setting specific times to see each other.

“Having [seeing Bo] as part of my daily schedule, it’s great,” Lane said. “I’m really appreciative of it.”

“We’ve had a lot of good times together on the court,” Bo summarized.

With two more seasons until Lane graduates, the Leschly brothers will have even more opportunities for success together on the tennis team.

The Crimson will begin their spring season on January 19th with matches against Purdue and Army. Its home opener will be against BYU on January 24th.