The Crimson suffered a 5-2 defeat at the hands of Boston University, struggling to establish the dominance that defined its first six games of the season.
By Spencer R. Morris 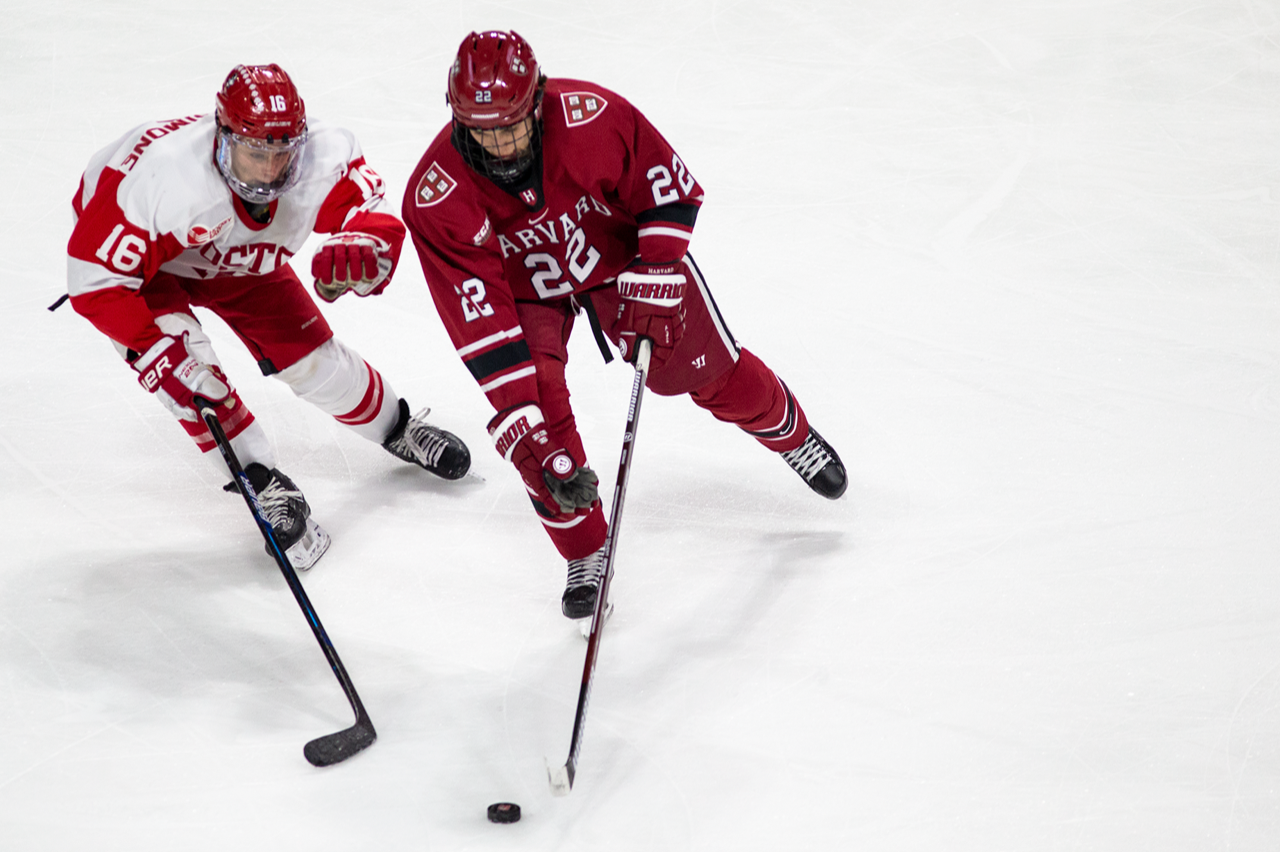 The Crimson immediately turns to No. 2 Cornell, who visits the Bright-Landry Hockey Center on Friday and poses the most daunting matchup thus far in 2019-2020. By Courtesy of BU Athletics

BOSTON — After opening the 2019-2020 campaign with the longest winning streak in program history, the No. 12/9 Harvard men’s hockey team saw its first losing streak of the season begin on Tuesday night. The Crimson (6-2-0, 6-0-0 ECAC) suffered a 5-2 defeat at the hands of Boston University (5-6-5, 3-3-4 HEA), struggling to establish the dominance that defined its first six games of the season.

“Guys played well from the start of the game to the end of the game,” BU coach Albie O’Connell said. “We forechecked them really well…. That team [Harvard] can really skate, and I thought we did a good job of taking away some time and space from them.”

Taking a one-score advantage into the first intermission, the Terriers carried play and extended their lead in the middle period. Late in the frame, the referees signaled a delayed penalty call on junior defenseman Reilly Walsh for roughing; Walsh raised his arms as he hit a BU skater near center ice.

With the extra attacker on the ice, the Terriers pinned the Crimson in its defensive zone. The long attacking shift culminated in captain Patrick Curry ripping a one-timer past Harvard goaltender Cameron Gornet (4 GA, .875 SV%). Junior blue-liner David Farrance, who nabbed a pair of assists in Tuesday’s outing, served up the clapper with a savvy cross-ice feed. Curry’s foray into double-digit goal scoring on the year gave his team a multi-point lead at the period horn — one which it was able to defend in the ensuing third stanza.

Five minutes into the final frame, BU defenseman Cam Crotty bulged the twine with a slapshot from the right circle, stretching the home team’s edge to three. The snipe put the game out of reach for the visiting Crimson, as Harvard’s late-third-period powerplay goal, courtesy of sophomore Jack Drury, made only a dent in the deficit.

Terriers backstop Sam Tucker (2 GA, .920 SV%), familiar with the Crimson from his days at Ivy League rival Yale, put forth one of his better performances on the season. In particular, he made several saves in the bout’s late stages to preserve his squad’s comfortable lead. Harvard attacked with significant momentum after Drury’s tuck and perhaps would have narrowed the margin to one without Tucker’s stout play. BU hung on, however, and potted an empty-net goal with just over a minute remaining to seal the victory.

“We ended up taking a penalty and they scored a goal,” coach O’Connell said. “[Tucker] made a huge save. It could have gone 4-3 very easily, [but] he made a highlight-reel save on a one-timer to keep the game, and then we ended up getting another one.”

The high-octane Crimson, which arrived at Agganis Arena as the number-one scoring team in the country (5.00 goals per game), failed to string together long spurts of crisp passing, threatening chances, and overall offensive dominance in Tuesday’s affair. The ice was tilted in the Terriers favor especially in the first two periods.

“The first two goals, they didn’t really have to work very hard for,” Harvard coach Ted Donato ’91 said. “The first 10 minutes of the game were pretty sloppy, and teams were trading chances. I also think that we took a couple of penalties that were unnecessary and didn’t allow us to get to our game. I really didn’t feel like we started to skate until the third period.”

Tuesday’s contest saw three goals before the halfway point of the first period, the most action-packed segment of the game. Freshman forward Trevor Zegras opened the scoring less than 90 seconds into the tilt, burying an in-alone chance on Gornet. Senior Patrick Harper forced a turnover in the Crimson’s zone, leading to the top-shelf finish from the Anaheim Ducks first-round selection. Harper finished with a game-high three points.

Prior to Zegras’ fifth of the season, BU had not scored since Nov. 23, as the team suffered shutout defeats to Sacred Heart and Cornell on either side of the Thanksgiving holiday.

The lousy start continued for the visitors when sophomore forward Baker Shore took a hooking penalty on the shift following the Terriers’ opening strike. Already ahead, 1-0, BU embarked on an early powerplay opportunity. Fortune quickly reversed for Harvard, however, as the penalty-killing unit raced up the ice and found twine on the rush.

Captain Nathan Krusko connected on a give-and-go with Walsh, who beat Tucker under the pads. Walsh’s tally erased his squad’s stumble out of the gate, but the ledger did not remain even for long. At the 12:30 mark of the frame, freshman forward Ethan Phillips toe-dragged around Walsh and threw a puck toward the goal which redirected in off fellow rookie Robert Mastrosimone. The hosts took the 2-1 advantage into the first intermission.

“In road games, you want to get on a team early,” Krusko said. “You want to take the energy away from the building. I felt like we didn’t do it good enough tonight. It felt like we were in and out. A lot of the lines couldn’t sustain any offense…. It just took too long for us to get to our game.”

Tuesday’s loss marks Harvard’s second straight and another blown opportunity in the past week to pocket a victory over a prestigious Boston hockey school. The team’s non-conference games have significant bearing on the Pairwise rankings, so in this regard the defeat will go down as a disappointment.

“Regardless of teams’ rankings and teams’ conferences, every night is a battle in this league,” Krusko said. “You have to come out every night playing like they’re the number-one team in the country. In terms of the national conversation, obviously we feel strongly with the group we have. We have to take care of business with our out-of-conference games. We don’t get many of them, so that kind of increases the pressure on every single game.”

Additionally, the Crimson’s early-December schedule — including clashes with Boston College, BU, and Cornell — provided a crucial chance for the group to validate its position among the NCAA’s elite teams. Still winless after two of these matchups, Harvard will turn to the No. 2 Big Red on Friday in an attempt to reaffirm its lofty national ranking and place in the national college hockey conversation.

“We felt like we established who we wanted to be early, winning a lot of games” Krusko said. “These past two games kind of gave us a shock and gave us a reminder that maybe we’re not as good as we think we are [yet]…. It’s really fortunate that we have such a great team coming into our building Friday because it gives us an opportunity to reestablish our identity and let everyone know that starting 6-0 wasn’t a fluke.”