The undefeated Big Red dealt the Crimson its first conference loss of the season to the tune of 3-1.
By Spencer R. Morris 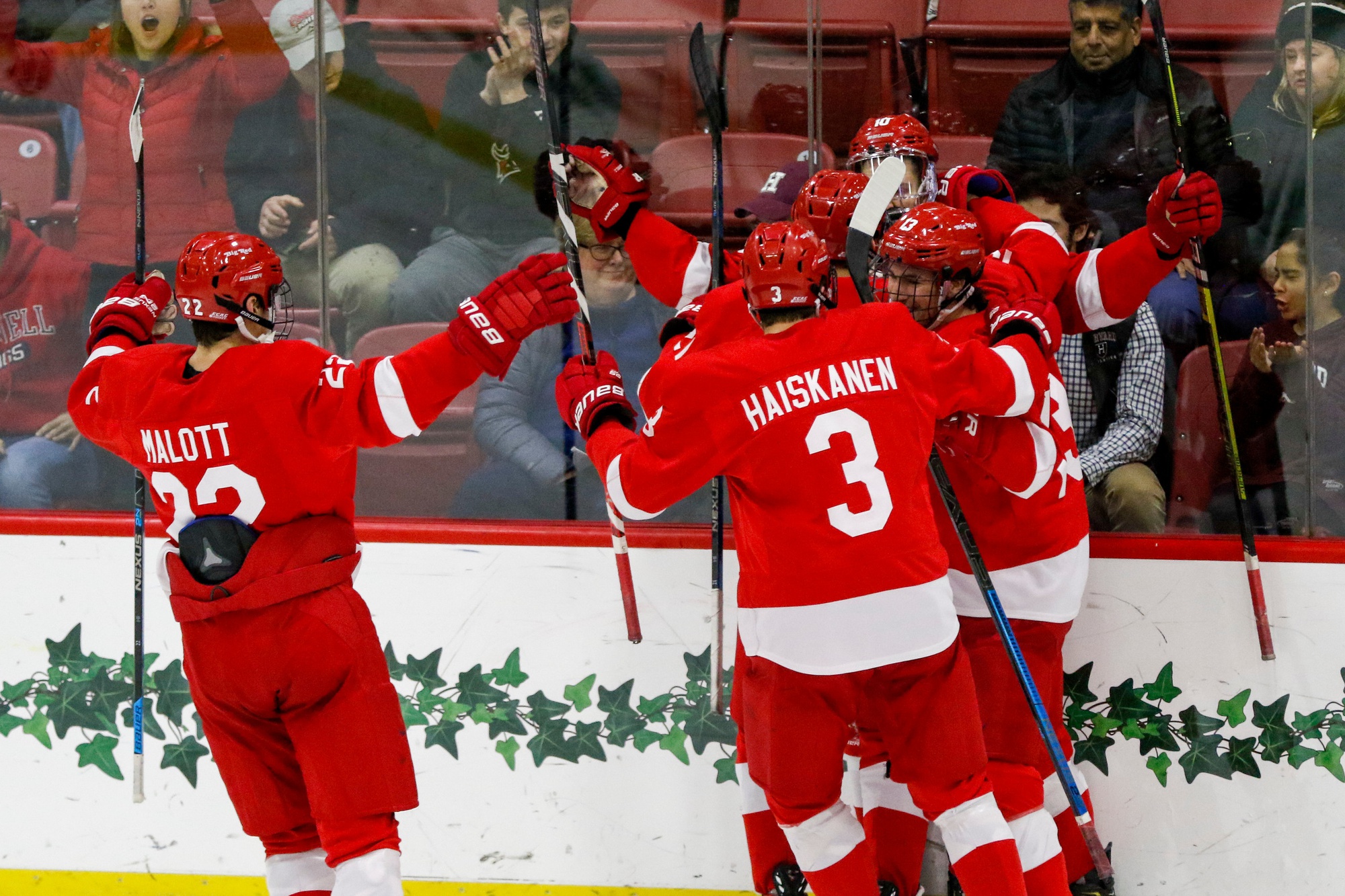 The Big Red utterly dominated in the first period, particular the frame's opening 10 minutes. From that point on, the Crimson was fighting an uphill battle. By Timothy R. O'Meara

The Harvard men’s hockey team cracked open its 2019-2020 schedule with six straight wins. Last week, it lost its unblemished record to a ranked Boston College team and followed up this performance with another defeat at the hands of another neighbor, Boston University.

Friday at the Bright-Landry Hockey Center, the No. 12/9 Crimson (6-3-0, 6-1-0 ECAC) continued its stretch of losses as it fell to historic rival Cornell in front of a sell-out crowd. The No. 2 Big Red (10-0-0, 7-0-0), the only undefeated team remaining in Division I, handed Harvard its first conference shortcoming of the season to the tune of 3-1.

“Coming on the road, we wanted to play disciplined,” Cornell coach Mike Schafer said. “And for the most part we did that. I thought we fell asleep a little bit in the second period. They took the timeout, they started to do some things differently, and I think we reacted very well to it.”

Three high-profile matchups in the past seven days made for a prime opportunity for the Crimson to show that it belongs alongside the country’s other top squads. More practically, the group will require the remaining conference schedule and few non-conference bouts to achieve marquee wins for the Pairwise rankings, the determinant of NCAA Tournament berths in late March.

“When you start the year, especially if you find some success, you think that, ‘Okay, this is the way we’re going to play,’” Harvard coach Ted Donato ’91 said. “But then you end up seeing different styles of teams, teams that are heavier…and we’re still sorting that out…. Quite honestly, it’s been a good test the last three [games] for us.”

Cornell delivered an emphatic statement in the tilt’s first frame. Taking the ice for the second period with a 2-0 lead, the Big Red added another tally at the 15-minute mark. During a shift with sustained offensive zone time, rookie forward Jack Malone curled above the goal line with the puck and found fellow freshman Travis Mitchell through a seam. The blue-liner buried the shot in a mostly empty net, a testament to the quality of Malone’s set-up pass.

With a sizable lead and a roaring crowd of visiting supporters, Cornell had tilted the ice severely in its favor. Harvard coach Ted Donato ’91 called a timeout to allow his squad to regroup, and the hosts picked up their play slightly, earning a powerplay which ultimately proved fruitful.

Sophomore defenseman Jack Rathbone faked a point shot and worked the puck down the left side. The offensive-minded rearguard connected with freshman winger Nick Abruzzese on a cross-ice feed, and the first-year executed the one-timer to put his Crimson on the board. 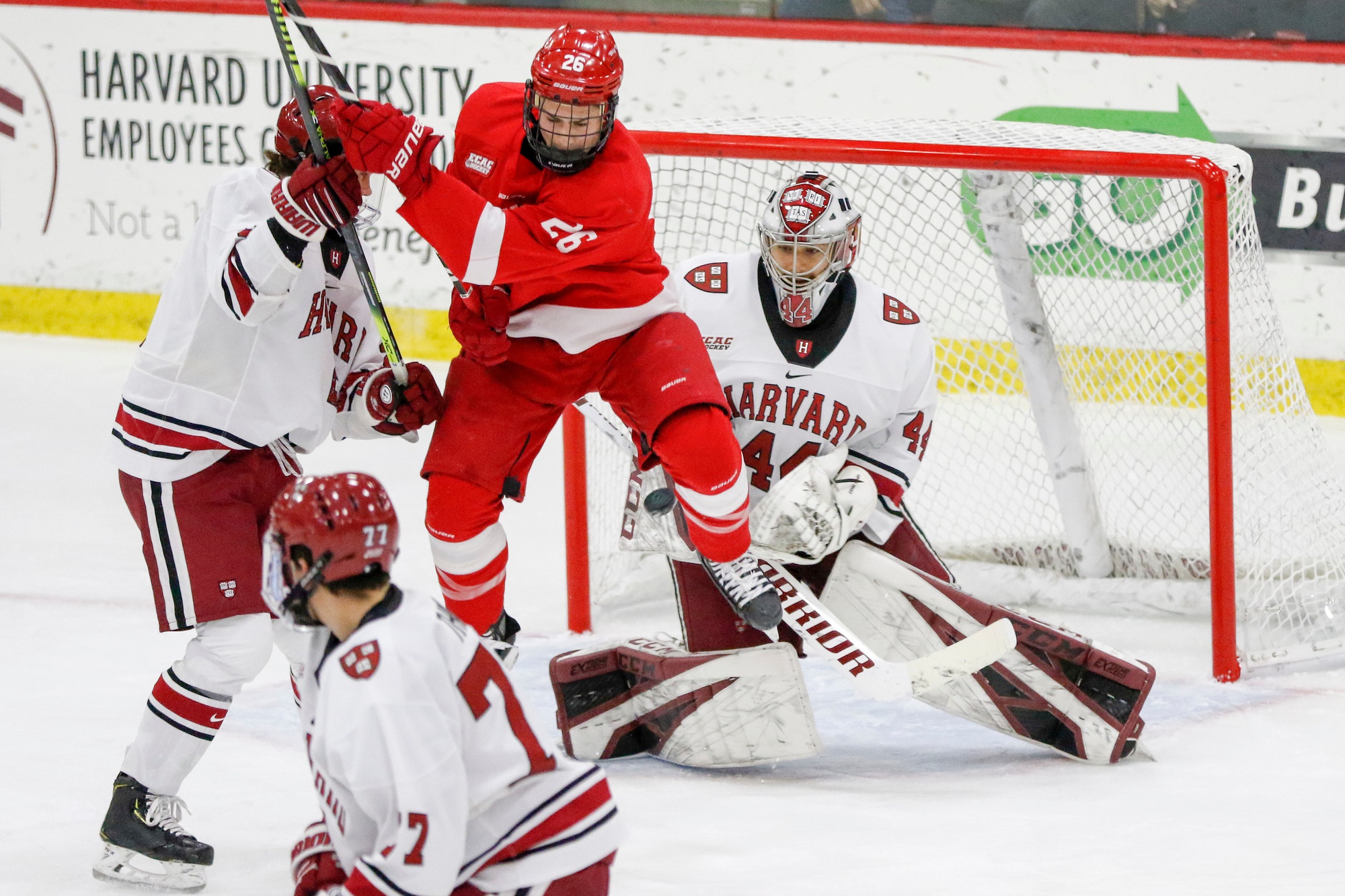 The Cornell forwards made it difficult for freshman goaltender Mitchell Gibson all night. To Gibson's credit, he hung in and gave his team a chance to win, but the play of the skaters in front of him failed to muster enough force. By Timothy R. O'Meara

One element of Harvard’s game which did look sharp on Friday was its man-up unit. The five attackers were snapping the puck cleanly from player to player, and of course the group cashed in once. Of the few high-quality looks Harvard had on Big Red backstop Matt Galajda (1 GA, .958 SV%), many of them came on the powerplay.

“Even before [the powerplay goal], we kind of started to get our legs under us,” Abruzzese said. “We scored, and I thought the rest of the game we outplayed them. We had a lot more offensive zone time, and that led to some chances. Maybe one or two goes in and it’s a different story.”

The Big Red’s pair of early strikes — not to mention several near-goals which only the pipes managed to keep out — marked an uncharacteristically offensive first stanza for Cornell. Ahead of Friday, just 18 percent of the team’s scoring came in the opening period (0.78 first-period goals per game). And Harvard, which entered the bout atop the nation in first-period goals per game (1.75), struggled to muster any offense through 20 minutes.

“[The start] was pretty much an ideal first 20 minutes,” said Big Red junior tri-captain Morgan Barron. “There were a few mental lapses, but other than that, it was a good start for us…. [The rest of the season] is going to be about trying to figure out how to play that way for the full 60.”

Cornell began the game with nearly 10 minutes of sustained pressure, hemming the Crimson in its defensive zone for minutes at a time. This smothering dominance earned the Big Red a powerplay early in the frame, which did not itself culminate in a goal but led to one shortly thereafter. 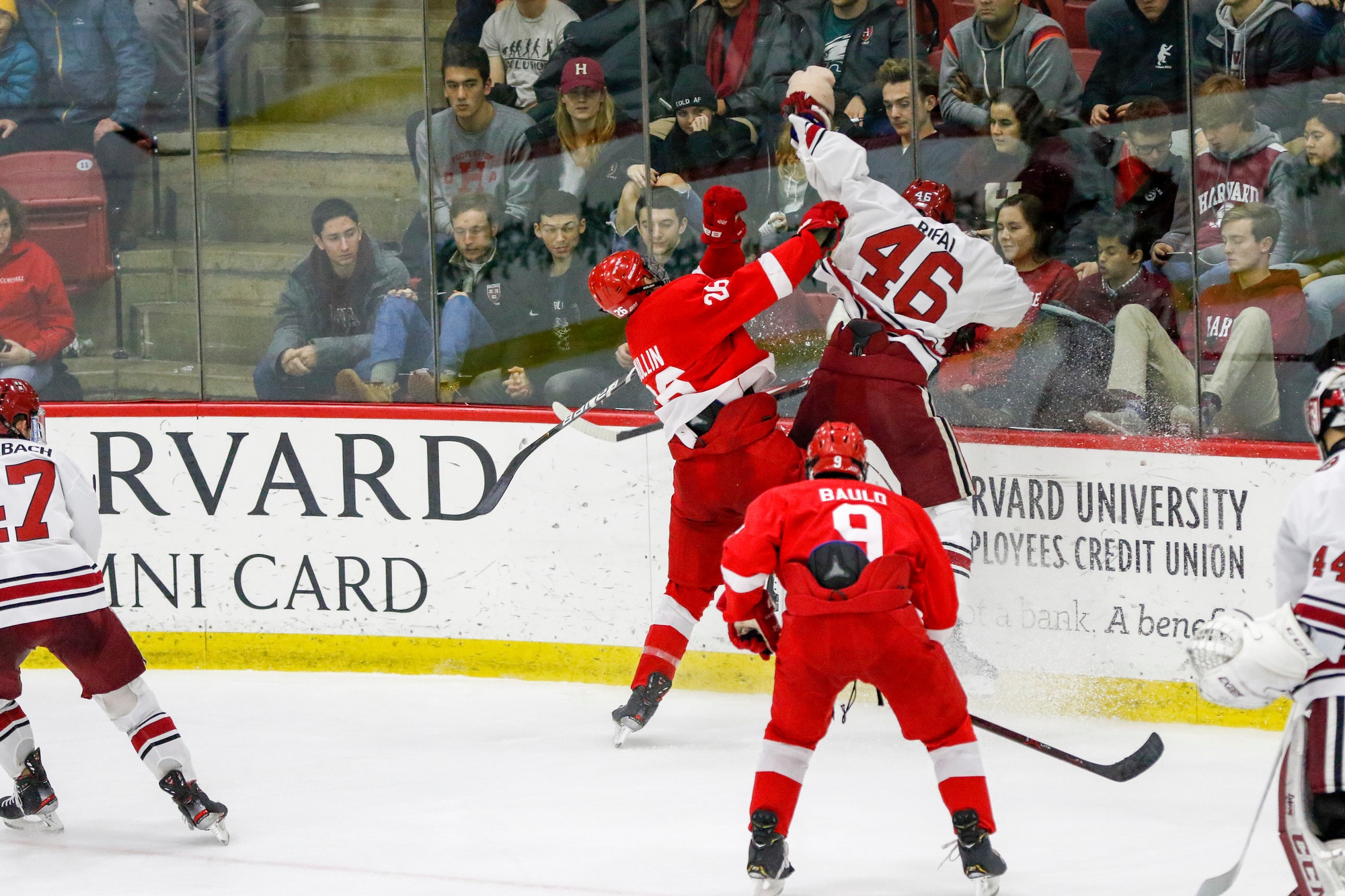 Cornell brought a physical style to the Bright-Landry Hockey Center on Friday. A somewhat undersized team that favors skill to physicality, the Crimson was forced to play a style out of its comfort zone. By Timothy R. O'Meara

As junior Henry Bowlby’s infraction expired, the visitors rushed the puck up the ice. On the subsequent cycling of the puck down low, tri-captain Jeff Malott picked up a centering pass that came from the left corner. The forward spun around the traffic at the net mouth and found his own rebound, beating Gibson under the pads.

The initial tally was one of a whopping 10 shots endured by Gibson in the contest’s incipient five minutes. By the first-period horn, Cornell owned a lopsided 17-4 edge in shots on goal.

“[Cornell] pinned us in the zone,” coach Donato said. “They came out physical, made us break the puck out under pressure. We didn’t do a great job of it…. I just felt [in] the first period, for the most part, we watched.”

In addition to the productive start, the Big Red’s ability to shut down Harvard’s impact forwards contributed to the success it found Friday in Cambridge. Cornell’s trio up front of Mullin, junior Kyle Betts, and fourth-year Noah Bauld has contained the opposition’s top line at even strength with significant efficacy this season.

“[Harvard] always has a top line,” coach Schafer said. “Over the years, they’ve always had that number-one line that can create offense…. That’s 10 games in a row now where [Mullin, Betts, and Bauld] have been out against the other team’s top line and they haven’t got a point 5-on-5.”

Looking to rebound from a disappointing setback, Harvard will look ahead to more conference action on Saturday against Colgate. The Big Red, meanwhile, continues its undefeated dominance and remains an ECAC rival against which the Crimson has enjoyed little success in recent seasons. Friday’s outing brings Cornell’s record against Harvard to 5-1, and 5-0 in the conference, since the Crimson’s 2017 Frozen Four run.