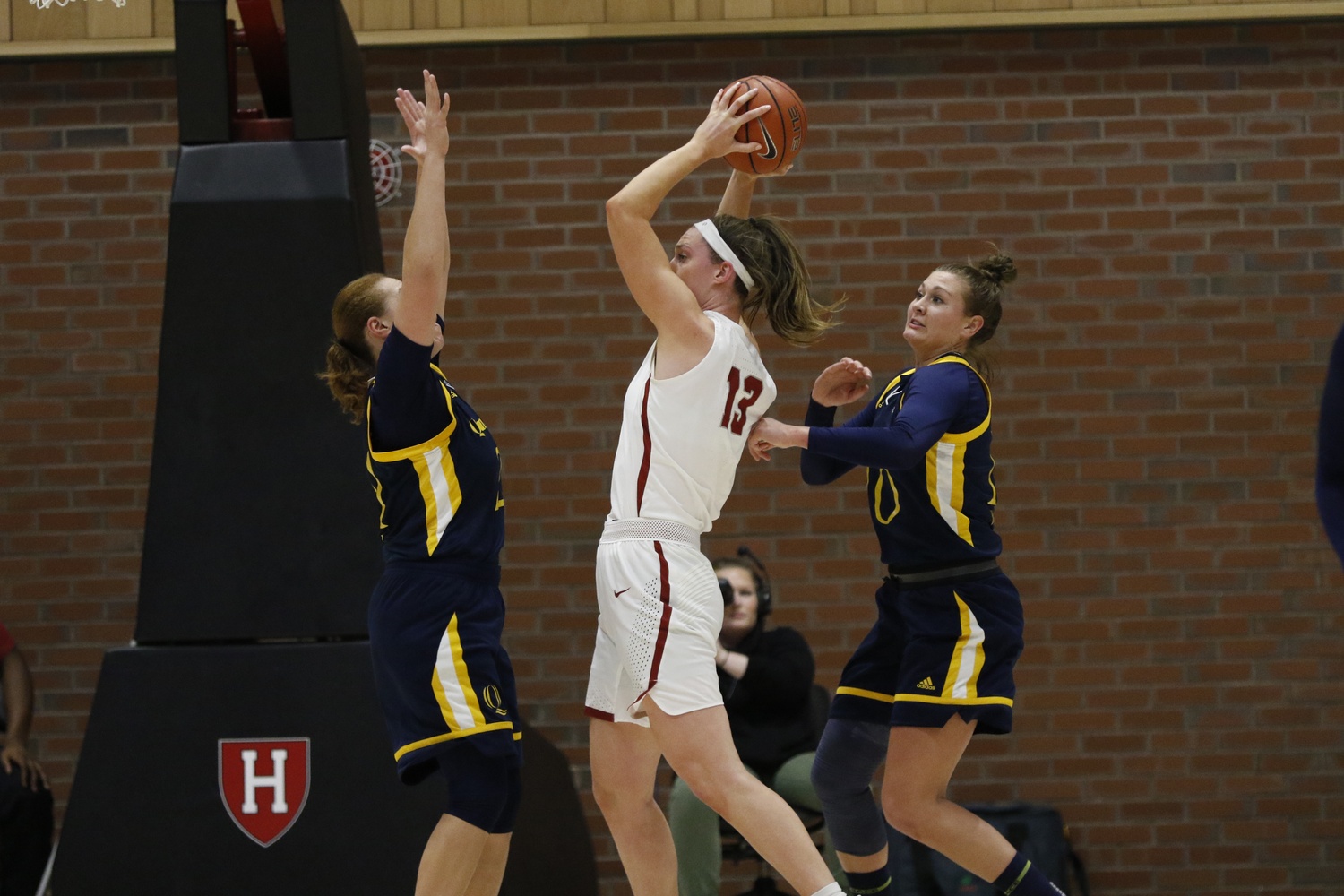 Harvard's tenacity on the glass has contributed to its 3-1 start to Ivy play. By Timothy R. O'Meara
By Lev Cohen, Crimson Staff Writer

In Harvard’s blowout win against Brown last Saturday, the Crimson out-rebounded the Bears 50-38, retrieving 15 of its 39 misses and holding Brown to 11 offensive rebounds on 45 missed shots (24.4%). The dominance on the glass was nothing new for Harvard, as the Crimson is now out-rebounding opponents by 5.3 boards per game this season, a margin that places the team 53rd in college basketball — above the 85th percentile — and second to Penn in the Ivy League.

Since league play started, Harvard has been even better on the glass. The Crimson has retrieved 188 rebounds to opponents’ 138, good for a margin of +12.5 per game. Just two teams in all of women’s basketball — Baylor and Mississippi State — have a rebounding margin better than +12.5 over the course of the season, and they rank No. 1 and No. 7 in the AP poll and have a combined 41-2 record.

Along with Penn and Princeton, the Crimson is one of three Ivy co-favorites this year, and it is easy to point to Harvard’s three standout guards as the main reasons for that. Junior guard Katie Benzan recently scored her 1,000th point for the Crimson (10-7, 3-1 Ivy), and both Benzan and co-captain guards Madeline Raster and Sydney Skinner have hit numerous big, clutch shots in close games this season.

Given the team’s strength on the boards, though, it is important not to overlook the impact of Harvard’s frontcourt. Junior Jeannie Boehm and sophomore Jadyn Bush, two consistent starters in coach Kathy Delaney-Smith’s lineup, come away with a combined 15.6 rebounds per contest.

Bush, a 5’11” forward, leads the team with 8.6 boards per game — and 9.5 per game in league play — despite being a full four or five inches shorter than many power forwards she matches up with.

“Despite being undersized, rebounding is always something that I’ve made a priority in my game,” Bush said, “I think for me it’s just being conscious of that and putting forth such an effort to be a good rebounder consistently has made a difference for me.” 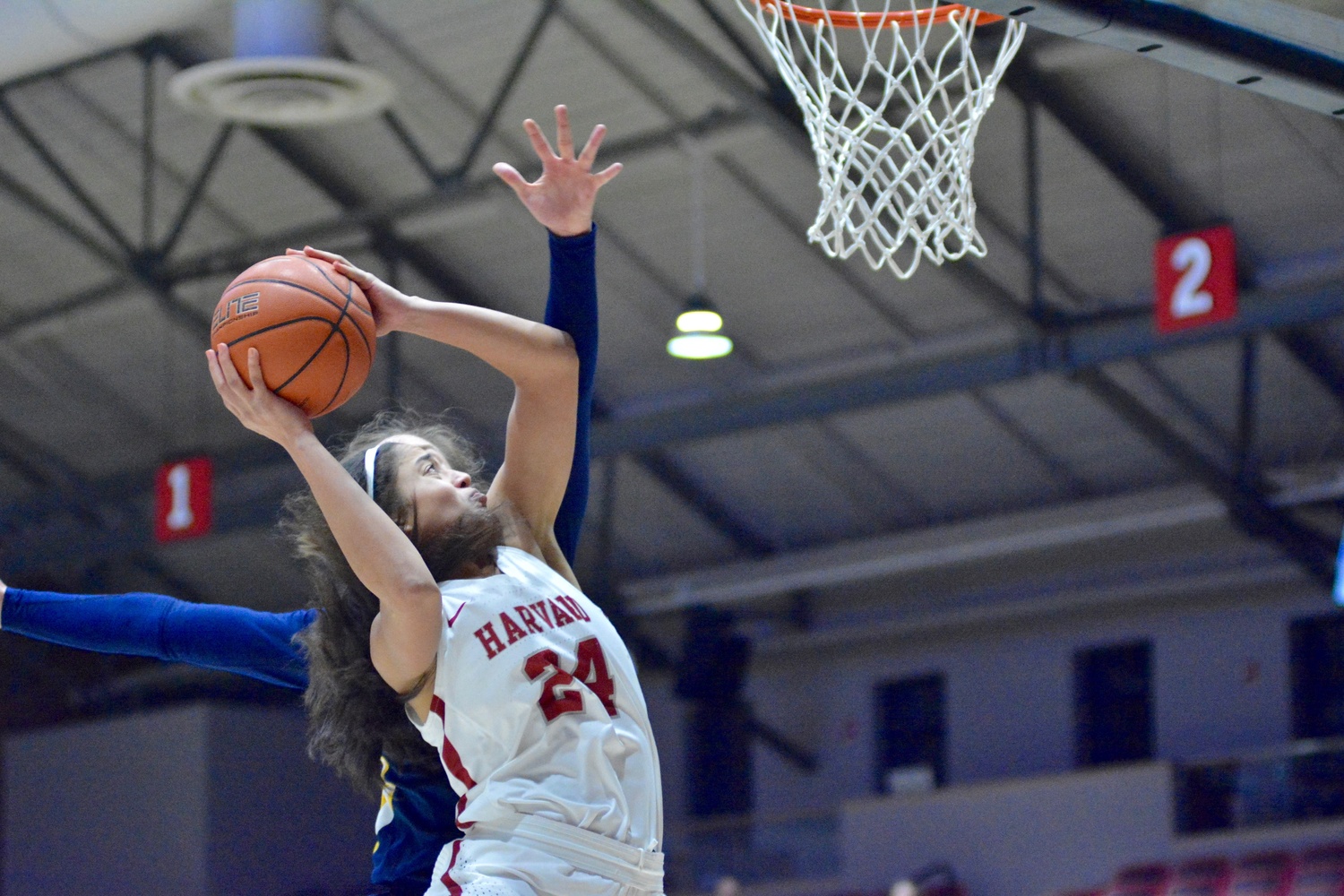 If Jadyn Bush continues her rate of offensive rebounding, she could finish in the top five nationally in this category. By Henry Zhu

Her efforts have clearly paid off, especially on the offensive glass, where she has made a huge impact throughout the season and particularly in league play. Prorated over the entire season, Bush’s 5.3 offensive rebounds per game in league play would make her the third best offensive rebounder in the country, behind Mississippi State’s 6’7” Teaira McCowan and California’s 6’4” Kristine Anigwe.

“For offensive rebounds it’s all about being able to read your teammates,” Bush said. “It’s an advantage to know when their shots are going to go up, so obviously within the offense knowing the reads and what we’re looking for, working earlier to get positions and to get to the rim has been really helpful for me.”

As much as almost any other part of basketball, rebounding is a team effort. Bush and Boehm are quick to point out that playing next to each other makes pulling down boards much easier.

“Jadyn is one of the best rebounders I’ve ever played with in my whole life,” Boehm said. “She attacks the boards so well and so I think Jadyn’s tenacity and my height is really hard to deal with in terms of our team dominating on the boards.”

Bush agrees that playing next to the 6’3” Boehm is a boon for her personal numbers.

“A lot of the time the reason I’m able to rebound is because Jeannie works hard to box out the center,” Bush said. “For sure her hard work allows me to be a better rebounder.”

Plenty of teams have two strong rebounding forwards, though. Part of what makes the Crimson so hard to deal with is that the guards get in on the action, too. Raster, Skinner, and Benzan are all good for over four rebounds per game, and the two captains have combined to average 11 boards per contest. The guards’ rebounding is part of a concerted team-wide effort to control the glass.

“It’s really rare to find guards that will rebound like the ones we have,” Boehm said. “I think it all really stems from [Coach] Kathy [Delaney-Smith] really emphasizing in practice that it doesn’t matter who you are and everyone has to crash the glass and everyone has to fight for rebounds especially on the offensive end.”

This Harvard team did not always so thoroughly control the glass. During the Crimson’s tough non-conference slate, the team was pummeled by bigger and more athletic teams like Notre Dame and Anigwe’s Cal team, which out-rebounded Harvard 46-25 (and grabbed 23 offensive rebounds to the Crimson’s four) and was still upset by visiting Harvard. Both Crimson forwards emphasized that non-conference play — and particularly the Cal game — transformed Harvard into a better rebounding team.

“Luckily we had such a tough non-conference schedule that those games prepped us well in terms of rebounding and our ability to keep other players off the boards and box out,” Boehm said, “Playing against Kristine Anigwe made it seem like once we got to Ivy League play, it would be a breeze because we’re so used to going up against such tall and athletic players.”

Rebounding will continue to be very important to the Crimson’s chances to break through and win the Ivy League, so it is no surprise that, as Bush said, the coaching staff has made it a priority in practice this year.

“Rebounding is all about effort,” Bush said. “To be a successful rebounding team has come from being cognizant of that part of our game and having an awareness to work hard and rebound. The constant reminders and emphasis by our coaching staff that it is so important.”