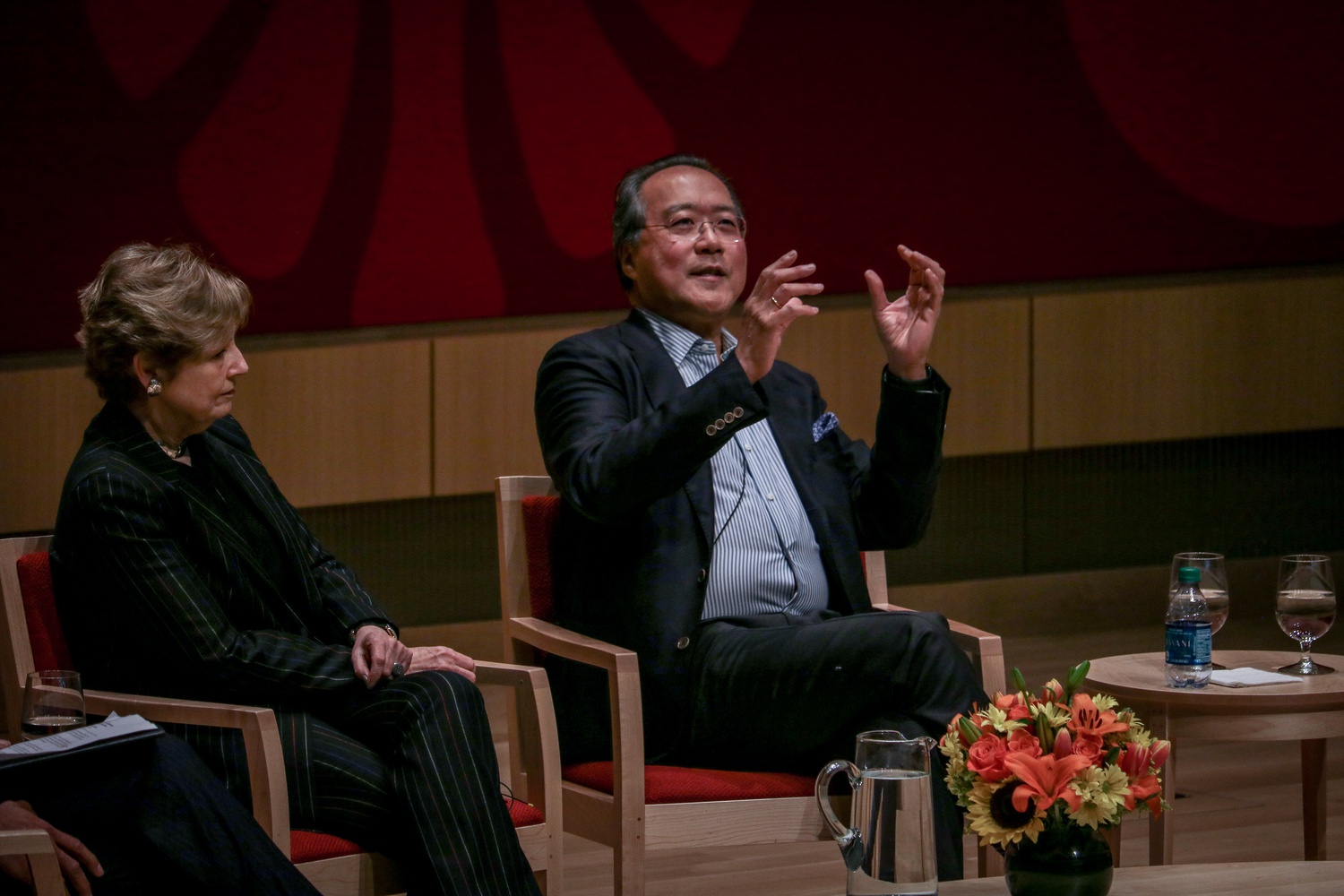 World-renowned cellist Yo-Yo Ma '76 and New York Philharmonic Orchestra President Deborah Borda discussed the role of art in driving social justice on Wednesday evening. At the talk, Ma promised that he will be devoting the rest of his life to social impact. By Mariah Ellen D. Dimalaluan
By Danielle J. Kranchalk, Contributing Writer

“It’s never art for art’s sake,” he said. “Art for life’s sake, or I’d say even further, art for us, for humans… We invented these things because we think they will help us.”

Ma discussed his work with various activists, particularly fellow musician Vijay Gupta. Ma and Borda commended Gupta’s work with the Street Symphony in Los Angeles and a women’s prison, and Ma praised him for “acting like a human” and treating every person with dignity and respect.

Ma cited his outreach in Flint, Mich. as an example of prioritizing the vision of local residents and artists when planning a performance. Ma said when he asks local residents how they want to represent themselves, they reply, “We want to show you what we have done with our community, and in spite of all the bad news, how resilient we are.’

As President and CEO of the New York Philharmonic, Borda shared new initiatives she has undertaken to extend the diversity of musical representation within the industry.

“[Symphony orchestras] are creatures of the 18th century, we’re trying to bring them into the 21st century,” she said. “If you look at the canon, there’s another enormous issue: All the music we play is written by men.”

Borda described her work on Project 19, the Philharmonic’s initiative to celebrate the centennial anniversary of the 19th Amendment of the United States Constitution, which prohibited denying citizens the right to vote on the basis of sex.

“We have commissioned 19 women, all different ages and cultural and racial diversities, to write world premieres for the New York Philharmonic,” she said to enthusiastic applause from the audience.

“I thought everyone in the hall was touched by that and I too was very touched by that,” said audience member Mary Jane Kornacki. “[Borda’s] really a stellar example of marrying something that we may think of as an elitist form, classical music, and making it with purpose to better society, and not just for the few in the concert hall.”

Rebecca Masland, who also attended the panel, said she thought the talk was revealing, especially in its pairing of music and social justice.

“I didn’t really grasp it until during the program, when Yo-Yo Ma talked about social responsibility and being a human being and acting like one,” she said.

Music Department Preceptor Katherine Pukinskis, who attended the talk, said she thought the event was a "wonderful" opportunity to hear about music outside of the context of a concert hall.

“I think that was the most inspiring part of it for me, you know, is that we get good examples of the work that is being done and awareness that we can all do more,” she said.