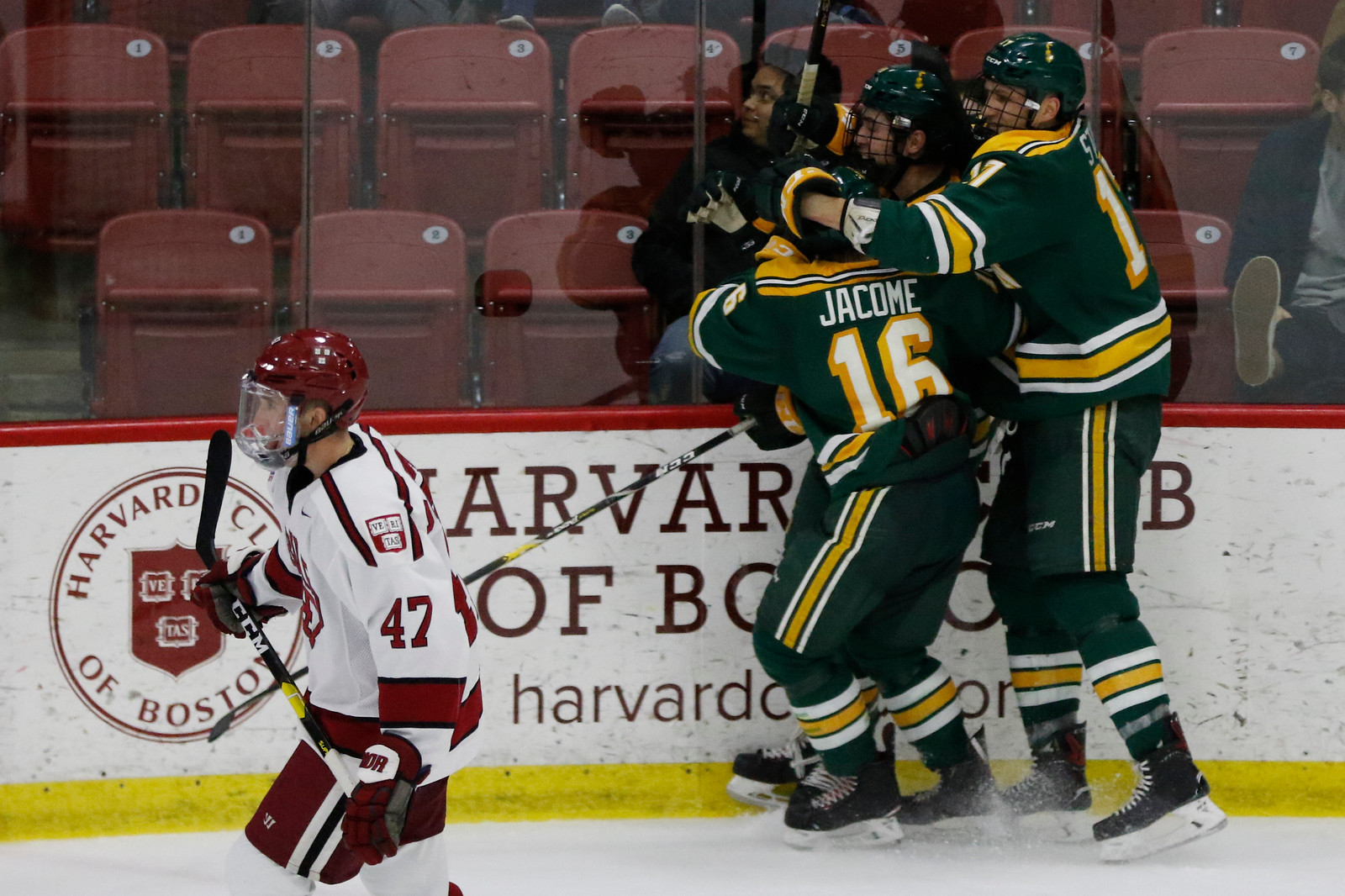 The Golden Knights ended the Crimson's ECAC playoff run, but Harvard still managed to clinch an NCAA Tournament berth due to its impressive season-long performance. By Timothy R. O'Meara

A poor start to the game set Harvard back in the early going, but the Crimson managed to cut Clarkson’s three-goal lead to just a single score a minute into the third period. This comeback effort, however, would fall victim to an unfortunate call and a bad bounce, ultimately rendering the contest out of reach for the No. 4 seed in the conference tournament.

“We needed to play better,” Harvard coach Ted Donato ’91 said. “We gave goals away too easily. [We] give up a faceoff goal, certainly had a little bit of puck-luck working against us, as they got a couple bounces…. We got it to 3-2, had some really good looks.”

The Crimson entered the second intermission trailing 3-1 instead of 3-0 thanks to a tally from junior defenseman Adam Fox 14 minutes into the middle frame. The potted puck, which changed directions en route to the back of the net, put the game within reach for the Harvard icemen, who had yet to find their groove by the mid-way point of the contest.

With the strike, Fox took sole possession of the program’s all-time record for most points scored by a defenseman in a single season. Mark Fusco ’83, a Hobey Baker Award winner in his own right, was the previous record-holder with 46 points in his senior year.

Another offensive-minded defenseman brought the Crimson closer to knotting the game when, early in the third period, freshman Jack Rathbone bulged the net on a shot from the high slot. Rathbone now has at least one point in seven straight outings (3–5—8).

Suddenly, after falling behind by three scores early on, Harvard had a legitimate chance of clawing all the way back to a tie game.

“[Rathbone’s goal] was enormous,” co-captain Michael Floodstrand said. “That got everybody going. The first goal was huge, obviously, by [Fox]. That second goal really solidified the fact that we were back in the game.”

But a spell of bad luck would halt the Crimson’s surge. Seven minutes after the pivotal Rathbone snipe, Golden Knights sophomore Jack Jacome punched home a goal with his skate after crashing the Harvard net. Upon review, the officials upheld the call on the ice — a good goal — much to the disbelief of coach Donato and his bench.

The margin returned to two goals, and the questionable call cut short any momentum the Crimson was riding after trimming Clarkson’s advantage to one.

For the Crimson, the resulting three-goal spread was insurmountable at that point. Frustratingly, both of Clarkson’s third-period marks were instances of the “Hockey Gods” siding with the Golden Knights and were thus relatively out of Harvard’s control.

“We weren’t really getting many bounces,” Floodstrand noted. “I don’t think we really truly got up until the third period, so it’s definitely something we have to work on.”

Harvard’s lackluster start forced it to play from behind almost from the very beginning of the contest. By the 5:13 mark of the opening period, Clarkson already owned a two-goal lead.

Three minutes into the tilt, a faceoff in the Crimson’s defensive zone went sour. Golden Knights junior Haralds Egle found twine on a wrist shot from the high slot. Classmate Nico Sturm, one of the elite two-way forwards in college hockey, won the draw cleanly, setting up Egle’s 18th tally of the season. Sturm and Egle finished the night with two points apiece, as did Schneider courtesy of a fortunate bounce on the final goal of the game.

Clarkson carried play for the next few shifts, and the tilted ice continued to yield results. Freshman forward Anthony Callin followed up Egle’s strike with one of his own, putting home a loose puck after a scrum in front of the net failed to neutralize the rebound from Harvard net-minder Michael Lackey’s initial save. 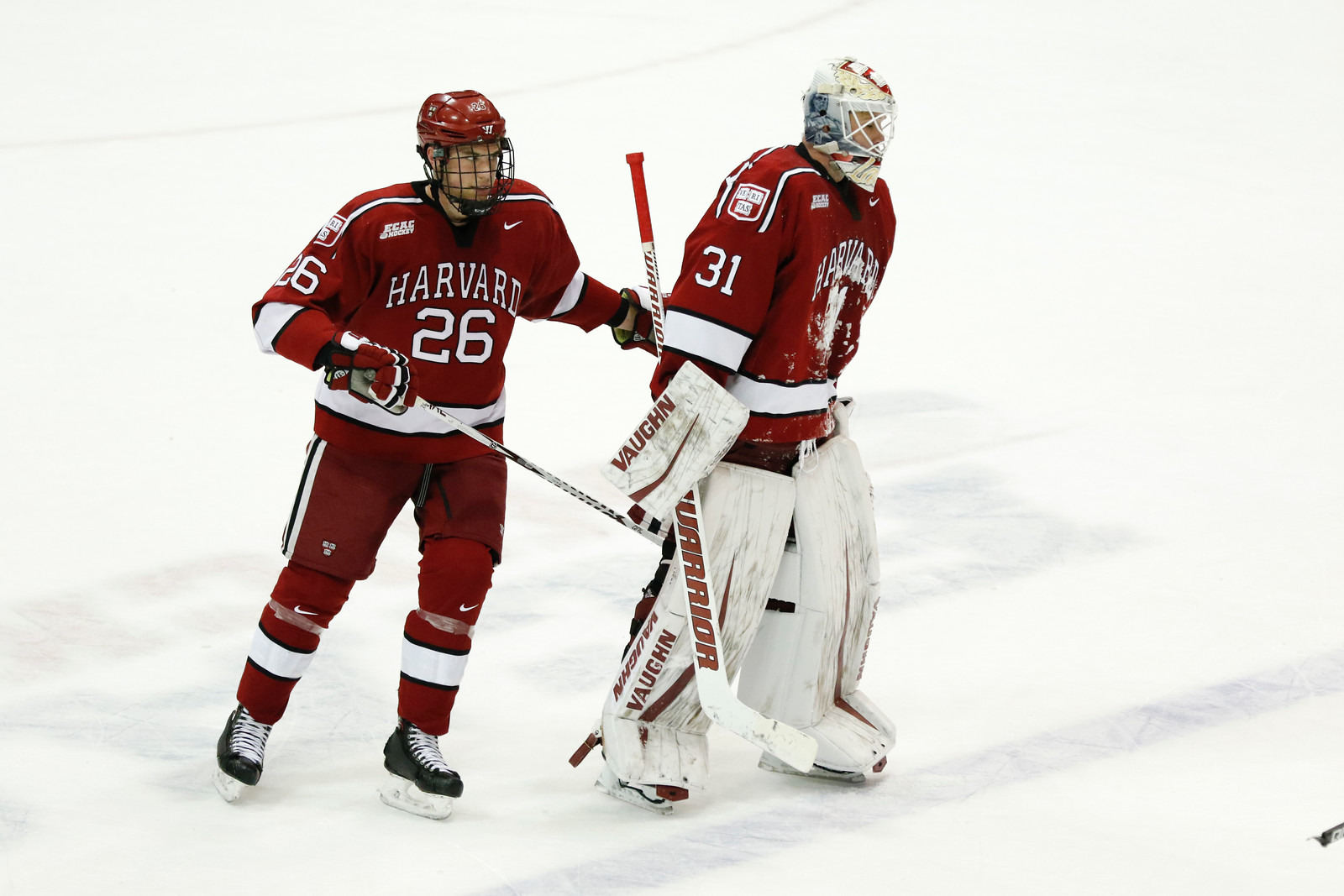 Senior net-minder Michael Lackey made his return from injury on Friday, only to be pulled in favor of junior Cameron Gornet mid-way through the contest. By Timothy R. O'Meara

For the Crimson, focus remained intense and spirits high, but the excitement of competing in the ECAC final four quickly faded to the reality of an early multi-score deficit.

“It’s a tough start, especially in a big game like that where momentum swings are enormous,” Floodstrand said. “That’s a very good team. Getting down to them is exactly not what you want — not our plan all week. So that definitely takes its toll on the bench.”

Lackey, meanwhile, was in the process of settling into his first game minutes since Feb. 16’s injury against, coincidentally, the Golden Knights. Two immediate goals against made it that much more difficult for the senior puck-stopper to regain the confidence and rhythm he possessed prior to his knee ailment.

“It was going to be a tough situation regardless, just coming off [one month] not playing,” said Floodstrand of Lackey’s return. “Let alone him coming back from an injury, those are tough shots regardless that we shouldn’t give up.”

Lackey never truly settled into his crease, and coach Donato had little choice but to pull his senior goaltender in favor of Gornet. Thirteen minutes into the middle stanza, Clarkson freshman Nick Campoli sent a wrist shot toward the cage from just over the blue line. The seemingly low-threat attempt squeaked through Lackey’s pads and dribbled over the goal line. The savable shot proved to be the game-winner.

While the skaters in front of him also left something to be desired through the first half of Friday’s affair, Lackey simply was not providing the high-caliber goaltending required to knock off a top-10 foe like the Golden Knights. Gornet, whose solid performance during Lackey’s month-long absence (5-1-0, 1.83 GAA, .938 SV%) allowed Harvard to continue its high level of play, once again received a chance to prove himself.

“[Gornet’s] been dynamite for us, and he played really well when he came in today,” Floodstrand said. “He gave us a lot of momentum, made a couple great saves. One goal is, in my opinion, a blatant kick, and the other one was absurd. So you can’t really put any blame on him. He did a great job.”

Despite the loss, Harvard’s season did not end on Friday night, as it did last year with a conference semifinal loss to Clarkson. Shortly after the final horn, the team was made aware that it had clinched a spot in the NCAA Tournament, a 16-team league-wide battle for the top spot in college hockey.

“It’s tough right now, but it’s obviously a learning experience for a lot of us,” said Fox after the game, before learning that his group had clinched a spot in the Tournament. “We have to right the ship if we are fortunate enough to make the tournament.”

After No. 4 Minnesota Duluth’s handling of No. 5 Denver in the NCHC semifinals on Friday, the Crimson’s at-large bid to the big dance was solidified. The program will return to the NCAA Tournament for the fourth time in the last five years and the seventh time under coach Donato’s leadership.

The defeat still stings, though, especially among veteran Crimson players.

“It’s a fun tournament to win. We know from experience,” said Floodstrand of the ECAC playoffs. “It stings losing in any situation, but [especially] at the end of the year, when you can give yourself…a better opportunity to win the [NCAA] Tournament by getting a higher seed, as well as winning a [conference] championship. It stings the older you get.”

Harvard will await the official draw of the NCAA Tournament to determine its regional semifinal placement and opponent for next weekend.