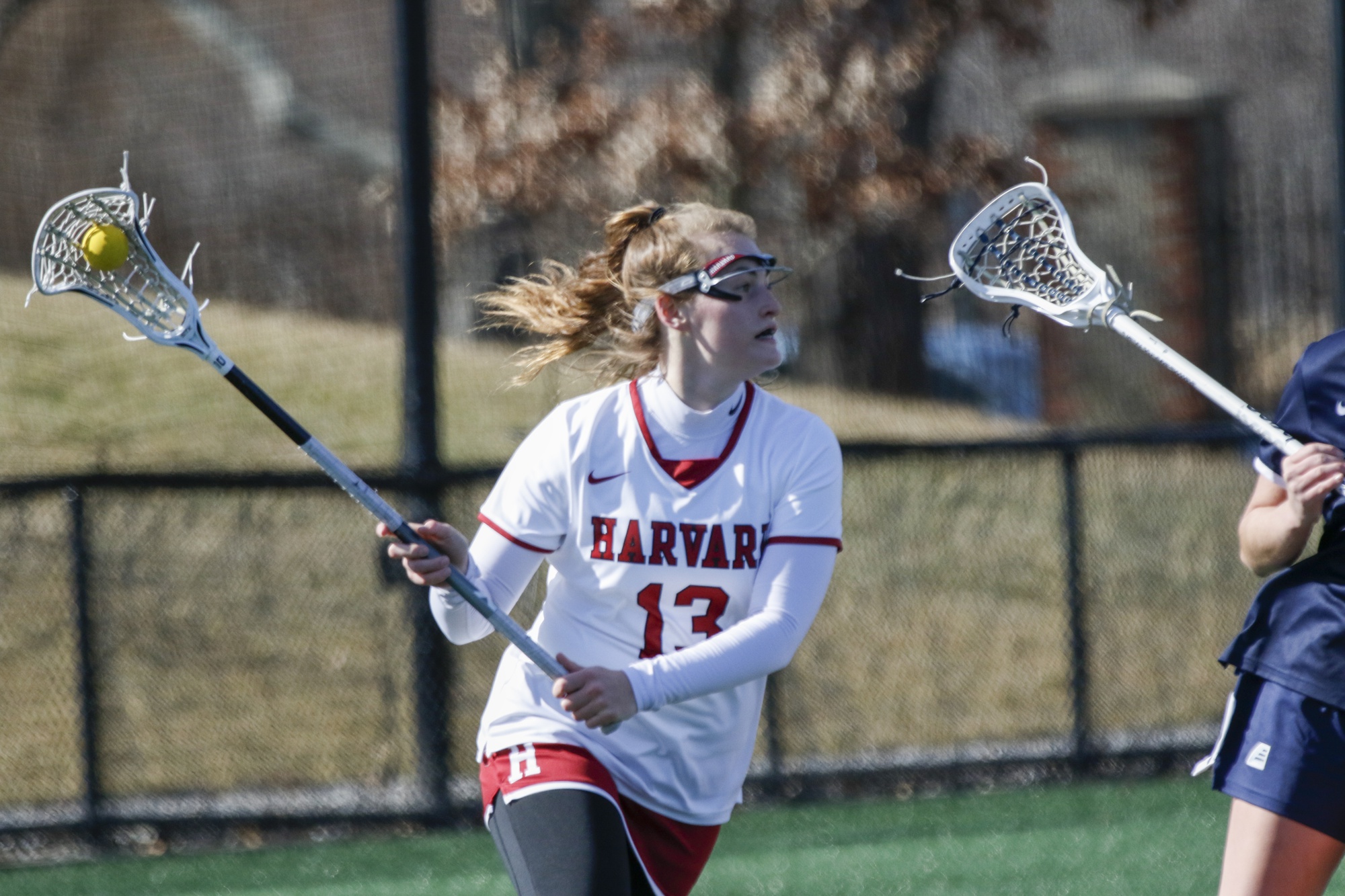 The win is not without precedent. With the two teams meeting on the field once a season since 2016, the win represents Harvard’s fourth consecutive in the series.

While Harvard won this season’s rendition of the game, the first goal of the Crimson’s season went to the Wildcats. Harvard was not deterred though as it responded with four of its own, one of which was Huslander’s first career point.

The Wildcats soon followed with another goal, but Garrity, Baiocco, and junior attacker Hannah Keating were quick to counter, cementing the Crimson’s lead with a goal each, expanding the point margin to five and the score to 7-2 in Harvard’s favor.

The second half began with MacAfee and Baiocco each scoring a goal to give Harvard additional breathing room. UNH still had life and began to lay the foundations of a comeback rally. Three quick, consecutive goals stole the momentum only to be reclaimed by the visitors who rocketed five more of their to clinch the game. Of these, Queri scored two, while MacAfee, Hulslander, and Garrity each tallied one, with MacAfee’s being her fourth of the game.

Harvard set the bar high in their first game of the season, and the team is ready for the challenge.

“We will be playing top-tier opponents all spring, so opening with a win was great for team morale,” MacAfee said. “I think we won because our coaches prepped us all week leading up to the game. They kept reminding us that we’re now in the full-swing of season, and we need to be ready to compete with other teams.”

MacAfee was the star of the game, scoring four of the fourteen goals and earning her 100th career-goal.

“In all honesty, it’s a testament to my teammates and coaches pushing me to improve every day,” MacAfee said. “I couldn’t ask for a better, more selfless group of teammates or more dedicated coaches.”

Harvard wasn’t quite so fortunate in the next game. The team played at BC this past Saturday, who were 3-0 going into the game. Although Harvard had momentum from the hard-earned win against UNH, the Crimson faltered by a 17-6 margin.

BC scored six consecutive goals to start the game. Harvard fought back, with Garrity, Keating and sophomore attacker Madison Conklin each scoring a goal within fewer than seven minutes. The Eagles were still comfortably ahead, and scored six more insurance goals to end the half. With plenty of time to reverse course, Harvard entered the second half and posted three goals, two earned by Garrity and one by Katie Muldoon. Unfortunately, the effort was fruitless, as the game ended 17-6 favoring BC.

Garrity played exceptionally, earning her fifth goal of the season and leading the team in goals. Her three scores are the most she’s ever tallied in a game, and she is on track to surpass her career-high 11 goals in a season.

Harvard came back home for their next game, beating UMass 18-12 to regain their winning record.Rotundo played another great game in the cage, recording a career-high 15 saves against the Minutewomen.

Although the Crimson started the game roughly, giving up three goals, the team quickly recovered, with Garrity and Muldoon scoring two goals each and Conklin, Hulslander, and MacAfee each scoring four.

The team played an excellent second half, outscoring UMass 8-3. Marley Jenkins, a senior who scored her first goal of the season against the Minutewomen, accredited this second half to Harvard’s defense.

“We buckled-down on defense and came up with some key draw controls that resulted in goals,” Jenkins said. “Once we were on a run, UMass couldn’t stop us. It’s always exciting to score and the game was pretty back and forth at times, so it felt great to help the team move our momentum forward with a goal.”

Jenkins said the team is looking to be more offensive in future games to create opportunities for more goals, a chance they will get in their next game on Wednesday against Boston University.