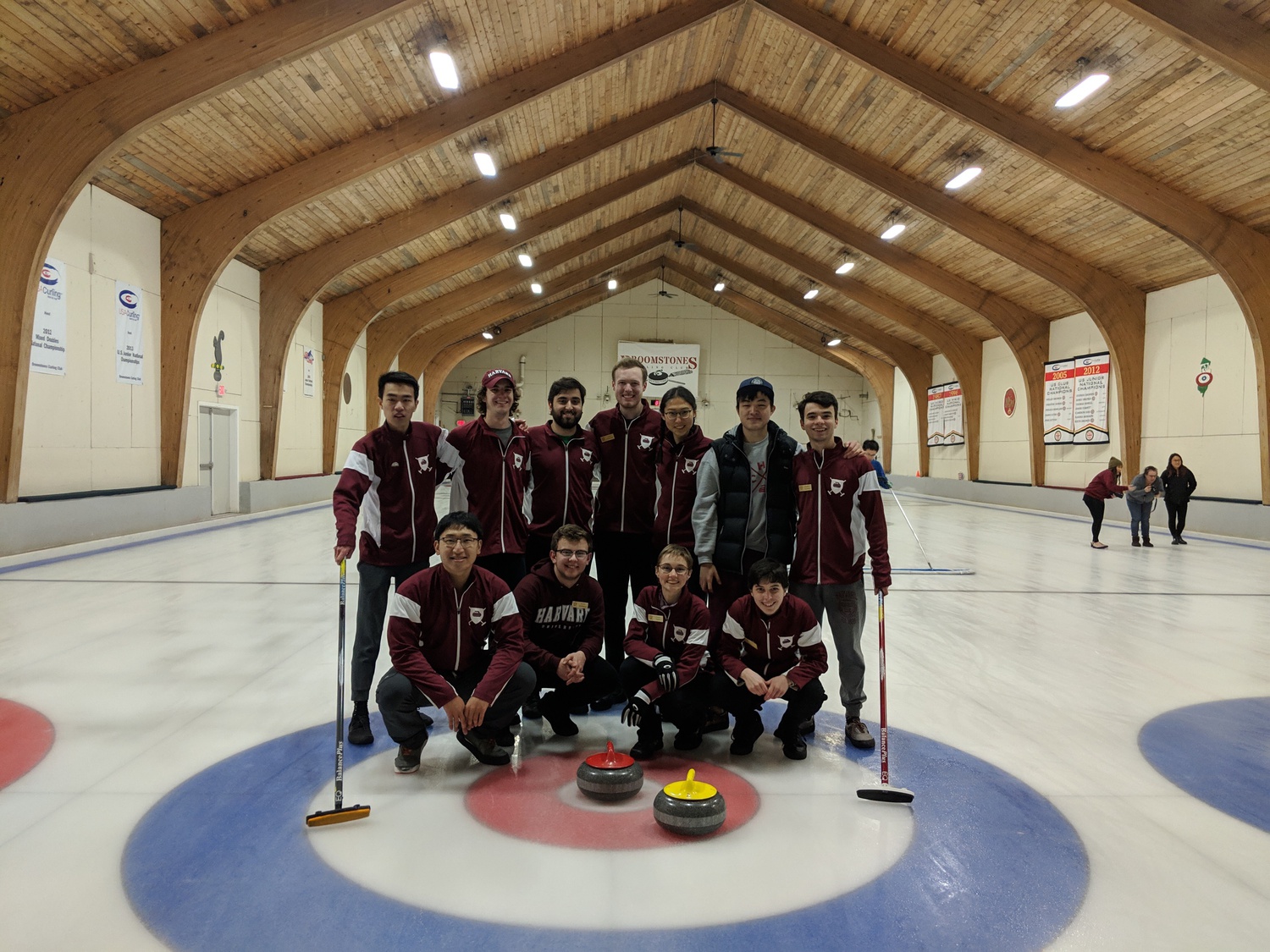 Not many people come to college with significant curling experience, but that doesn’t stop the Harvard Curling Club from taking people who’ve never heard the word “bonspiel” and sending them to compete at Curling Nationals within the year. This time around is no different, as the Crimson will be sending a team to complete at their home ice arena this weekend.

After wrapping up a successful season, Harvard Club Curling is taking the ninth seed for the 2019 USA Curling College National Championship. This year it is held in Wayland, Mass, at the Broomstones Curling Club, about a 35-minute drive from Cambridge.

From March 8th to 10th, Harvard will compete against some of the top collegiate curling teams in the country. Only the top 16 seeded teams across the nation qualify. This year some of Havard’s competition includes Yale, MIT, Hamilton, and Colgate.

“We found out as a team a few weeks ago that we qualified for nationals” said president of the team, senior Neekon Vafa. “We’re all pumped and excited to be able to participate.”

Harvard has high hopes for this year’s championship, after a strong showing the past two years. In 2017, Harvard placed fourth in the tournament and, in the next season, the Crimson opened the competition with a big win over Yale. The team is excited for the possibility of another rivalry matchup this weekend, but won’t be playing the Bulldogs in the first round. The past two championships were held in New York and Wisconsin, so the home location of this year’s championship is especially exciting.

The competitive season of collegiate curling starts in November, and ends with Nationals in early March. The season consists of six formal bonspiels, with scrimmages against other teams in the area making up the rest of the team’s contests. Curling tournaments are called “bonspiels,” which is thought to be derived from the Dutch word spiel, meaning game. Each bonspiel consists of a set number of ends, and the scoring rules are described as being “similar to bocce,” where the most points are awarded for stones closest to the bullseye on the ice. The Crimson’s last bonspiel was in Utica, N.Y., where they recorded decisive wins over both Yale and Cornell.

The club was informally started in 1999 by a group of Harvard graduate students.

“It was started almost as a joke between some Canadian law school students and has existed in various stages ever since,” said sophomore and team treasurer Jack Schroeder. “ I think we’re probably the third or fourth generation of the club.”

Eager to introduce newcomers to the sport, the team holds learn-to-curl events twice a year. This is when a majority of the team had their first experience with the sport. New club members learn the rules, and get to practice sweeping and throwing stones.

“Some people have curling experience, but I would say generally the majority don’t,” Vafa said. “It’s probably about one-third, two-thirds in terms of those who are committed: one-third have had experience coming in, two-thirds don’t. But it depends on the year and who happens to be playing.”

Curling is a sport that can be learned and picked up fairly quickly. Some of the members of the team headed to Nationals have only one year of curling experience.

“There’s definitely a learning curve, it might take like a practice or two to get into it, but once you do, the end goal is in sight,” Schroeder said. “You can see yourself being very good.”

The Winter Olympics are often a source of popularity surges for the sport of curling, especially in the U.S. This past 2018 Olympics was especially memorable, as the American team clinched the gold medal, a first for the United States.

Vafa’s own initial exposure with the sport came from watching the Olympics.

“I joined the team my sophomore fall and I didn't have any experience beforehand,” Vafa said. “But I've seen it in some Winter Olympics in the past, so I decided to try it out and I've loved it ever since.”

However it isn’t always easy getting all the new members onto curling ice. Not practicing on campus means organizing transportation is often the biggest challenge the team faces. The team practices at Broomstones Curling Club in Wayland, Mass., which they share with some of the other schools in the area such as Tufts and MIT.

However, this minor obstacle can’t stop the team.

“There’s a lot of interest at Harvard for curling, and there’s a healthy amount of us really committed on a day to day basis,” Schroeder said.

While the team is primarily undergraduates, there are also graduate students from Graduate School of Arts and Sciences, the Law School, and the Chan School of Public Health on the roster.

Vafa mentioned the possibility of keeping curling as a hobby in the future, putting on display the transformative effects Harvard Club Curling seems to have on those new to sport. From watching curling at the Winter Olympics to heading to Nationals this weekend, Vafa hopes to cap off his Harvard journey with a fierce showing in Wayland.