As a Tandem, Harvard Senior to Compete with Lifelong Friend in Boston Marathon

Jacob Russell '19 and his friend Patrick Dewey will be among just 10 tandems allowed to run the Boston Marathon next Monday.
By Derek Schaedig 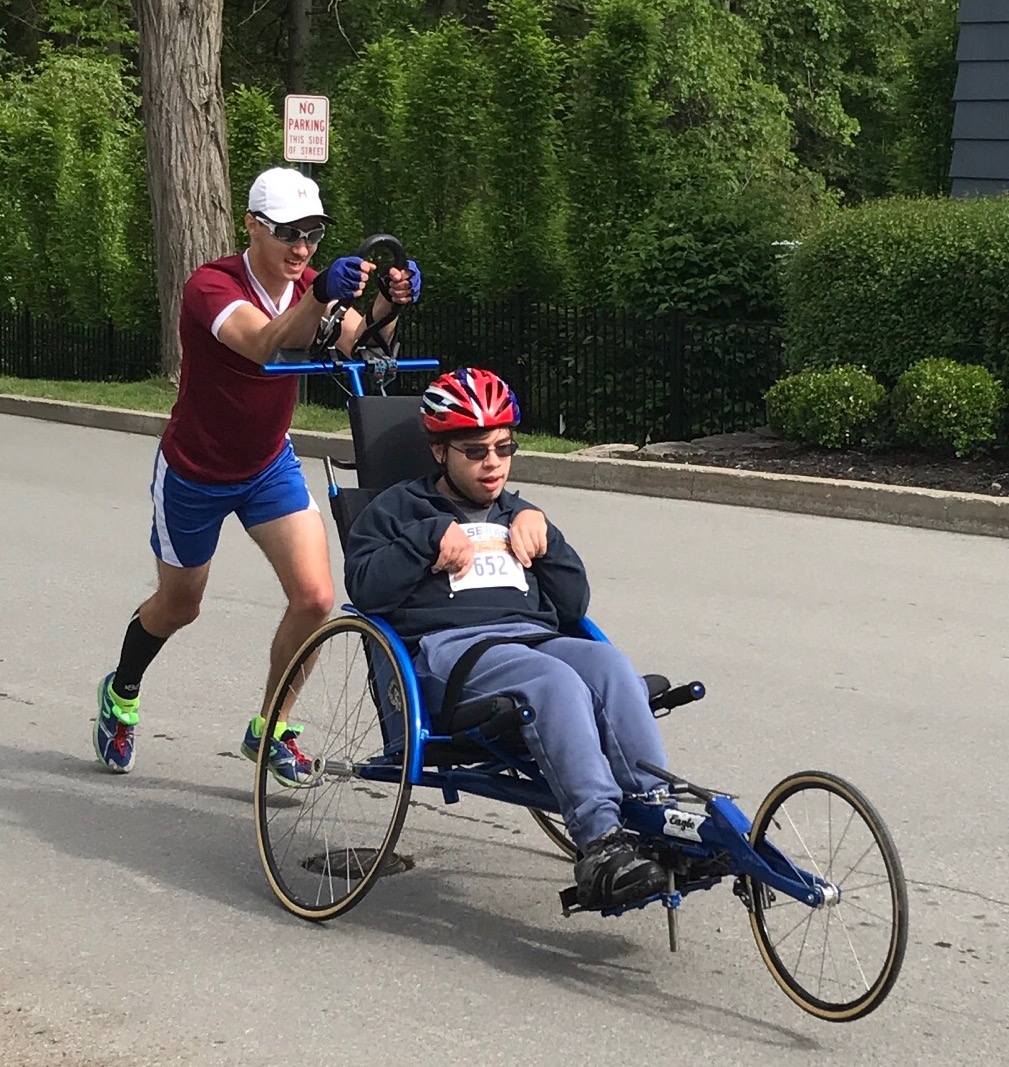 Jacob Russell and Patrick Dewey have raised over $10,000 for The Hole in the Wall Gang Camp leading up to the Boston Marathon. By Courtesy of Jacob Russell

Every third Monday of April, approximately 30,000 runners from around the world flood the streets of Boston in order to accomplish a lifelong goal years in the making — participating in the Boston Marathon.

As the world’s oldest annual marathon, the race attracts many hopefuls. This year’s competition received 30,458 applicants who had met the qualifying times for their respective age groups. From that pool, only 10 were allowed to be accompanied by a teammate in a wheelchair.

Jacob Russell, 21, and Patrick Dewey, 22, began their journey to the Boston Marathon as early as elementary school. Both from Cooperstown, New York, the two first met each other after being placed in the same kindergarten class. Upon learning of their mutual passion for classic rock music, the two bonded immediately.

“We might have been two of the only five year olds into classic rock,” Russell jokingly recalled.

A passion for music initially sparked their friendship, but it was a decision by their kindergarten teacher that would create a lifelong bond.

Dewey was diagnosed at an early age with cerebral palsy, a disability which permanently impairs muscle coordination. His diagnosis also required him to use a wheelchair for mobility. Of his classmates in kindergarten, only certain members were permitted to transport Patrick from class to class: Dewey made certain Jacob was the first classmate allowed to do so.

“The teacher knew that we were really good friends,” Dewey commented. “She knew this would be a good way of forming a bond.”

The two remained close throughout the years, yet their relationship became more difficult to maintain as the two entered high school. Russell began taking part in varsity athletics including sports such as wrestling, track and field, tennis, and cross country. Due to Patrick’s disability, he was no longer able to be with Jacob during these activites—a barrier the two had not yet encountered.

Russell was determined to find a way to be able to include his childhood friend in his new endeavours. It was in this pursuit that he stumbled upon the story of “Team Hoyt” in an article written by Sports Illustrated. A father and son team, Rick and Dick Hoyt have competed in 72 marathons together, 32 of those being Boston Marathons, despite Rick’s cerebral palsy.

“When I read about Team Hoyt, I just thought it would be a great way for us to do something together and for Patrick to be able to experience competition,” Russell said.

The pair have since competed in 15 races and two marathons together. The transition from individual racing to competing as a team has had its bumps though.

Jacob Russell ‘19 and his lifelong friend Patrick Dewey will run the Boston Marathon as a tandem on Monday. By Courtesy of Jacob Russell

The team raced their first marathon together on a sweltering 90 degree sunny day in Poughkeepsie, New York. Midway through the race, Dewey’s footrest on his wheelchair began to come loose. Russell managed to trek on a few miles before the footrest began sparking against the ground. Upon multiple stops in order to repair the wheelchair with a roll of duct tape, Russell began cramping. Under normal circumstances, Russell might have let his physical limits get the best of him, but he pushed on for his best friend.

“Normally, if I was running by myself and my legs were in the condition they were due to the cramps and spasms, I might have just quit,” Jacob said. “It’s easy to say I can fail myself and cut my losses, but I couldn’t let Patrick down.”

Jacob, though, doesn’t rely on Dewey just for motivation. Still embracing their love for classic rock, during their races, Dewey hums hits from the pairs’ favorite artists such as Led Zeppelin, Aerosmith, and Deep Purple in order to help Jacob endure the intense mental strain a marathon imparts on runners.

Russell has become so accustomed to running with his childhood companion, doing so without him feels unnatural. Due to the limited number of wheelchair racing tandem spots, Russell ran the Boston marathon without Dewey last year. While he remains proud of this accomplishment, he knew it wasn’t complete without his best friend by his side.

“It’s so much better to run with Patrick than individually,” Russell said. “It [the Boston Marathon] was cool to do and I got to say I did it, but I wasn’t satisfied with it in the end.”

The team is able to compete in this year’s marathon largely due to their support from The Hole in the Wall Gang Camp foundation, a program that provides fun, engaging camping excursions for children with disabilities. Dewey has been a part of the program since he was seven. Despite the team raising $10,000 for the charity, Dewey argues it is The Hole in the Wall Gang Camp that has given him the most.

“We really owe it to Hole in the Wall to allow us to be on their fundraising team and on their race day team,” Dewey said.

When searching for a charity to race for, the team discovered that The Hole in the Wall Gang was the ideal match for them. Not only did the team look to give back to an organization that has provided Dewey with so many opportunities, but both believe the foundation’s mission aligns with their own.

“It worked out really well with our mission which is to show that disabilities can’t stop people’s will for competition,” Russell said.

Although running a marathon is an incredible feat for anyone to accomplish, Russell has found a way to go above and beyond, running with a deeper purpose.

Dewey will receive a degree in communications from Edinboro University, while Russell will graduate with a degree in history and government from Harvard University. For now though, accompanied by the sweet sound of Aerosmith, the two are just looking forward to completing the journey they began in kindergarten class so many years ago.