With strong support systems on “both sides of the river”, these seniors believe more student-athletes can pursue a thesis while continuing to excel on the field.
By Henry Zhu 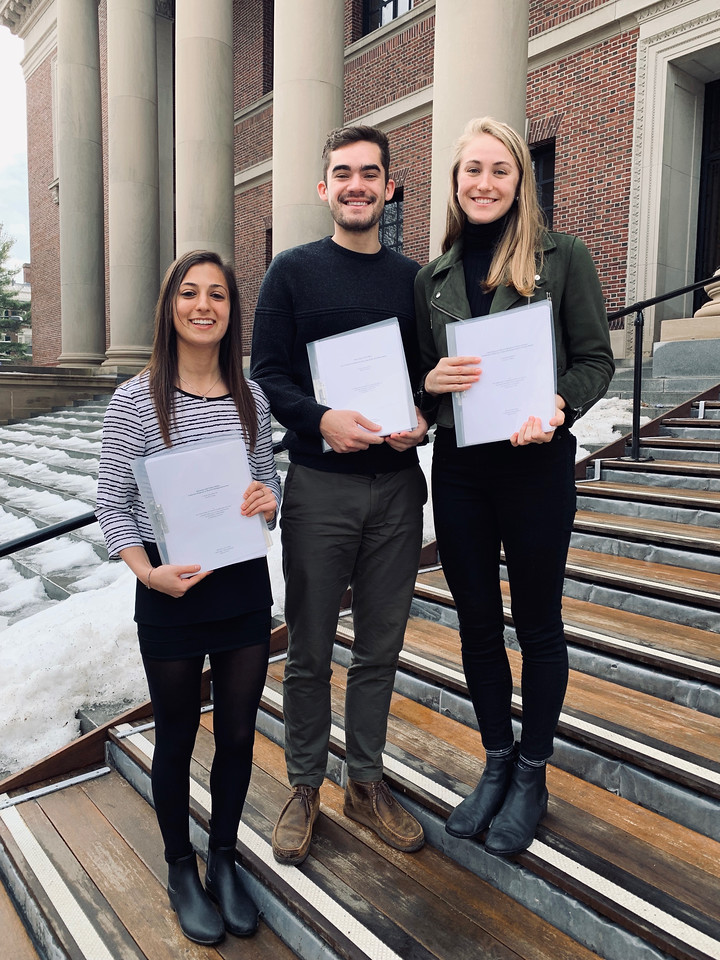 Ask any undergraduate department chair, and he or she would most likely state that the crown jewel of the Harvard academic experience is the senior honors thesis. Students who commit to this process are asked to dedicate much of their final year delving into original research, ultimately producing a paper typically ranging from 50-to-150 pages on a topic of interest related to their concentration.

An emblematic part of the Harvard experience, “thesis-ing” or “buried in Lamont” are phrases that quickly emerge in the Harvard student vernacular during the turnaround from senior fall to senior spring. Although still taking classes and finishing up concentration requirements, this project by in-large becomes the primary focus of these students from early September to early March.

But for a select group of students on campus, there is another large commitment that they must concurrently accommodate: playing a Division I sport at a high level in what is most likely the final season of competitive athletics in their lives. The culmination of both the undergraduate academic and athletic experience has been both a challenging and rewarding experience for the five Crimson student-athletes interviewed. With strong support systems on “both sides of the river”, these seniors believe more student-athletes can pursue a thesis while continuing to excel on the field.

For many student-athletes, the peak season for their respective sport also comes during the final stages in the thesis writing project. Here, the two worlds literally intersect at the same time, requiring critical time-management and balancing skills. These demands are not foreign to senior student-athletes — who have already experienced eight semesters of “the grind”— but the added stress of this seminal research project necessitates even more diligence and flexibility.

“I would be on six-hour bus rides with no Wi-Fi trying to get research done that’s not always easy,” said Claire Rushin, a women’s lacrosse team member and Human Evolutionary Biology concentrator. “It took a lot of planning in advance. So if I knew I was traveling, I would have to get all the research done ahead of time so that I could just write on the cramped corners of a bus.”

In addition to the lacrosse season, basketball’s busiest time came around March during Ivy postseason play. For men’s basketball forward Balsa Dragović (whose thesis in History and Science was due Mar. 8), this meant working on the paper in any setting possible.

“I tried to use every second of free time, if that was a hotel room, bus, or airport,” Dragović said. “My teammates know, they kind of made fun of me.”

For those student-athletes whose research required a physical presence in a laboratory or library, mutual understanding among coaches and professors was critical to finding the right times for conducting research. Although taking advantage of the summer offseason months was invaluable, semester-time research often meant going into lab at times when many students were asleep.

“I had to be strategic with my time,” said Andrew Bolze, another Human Evolutionary Biology concentrator. “Over the summer when training was over, I definitely focused on getting most of the lab work done so I could do most of the data analysis on my own through to the wee hours of the night. I would say I was extremely lucky when I had a very mindful coach, someone that brings me a lot of flexibility and an advisor that cares about my time commitments.”

“I would like to thank my coaches for being very understanding with classes and everything throughout my four years,” Owolo said. “That’s one thing that’s very good about the baseball program — Coach Decker and our assistant coaches, they’re very flexible...You definitely have to work at some odd hours in lab to get the thesis done, definitely some late nights in BioLabs. But overall, great experience.” 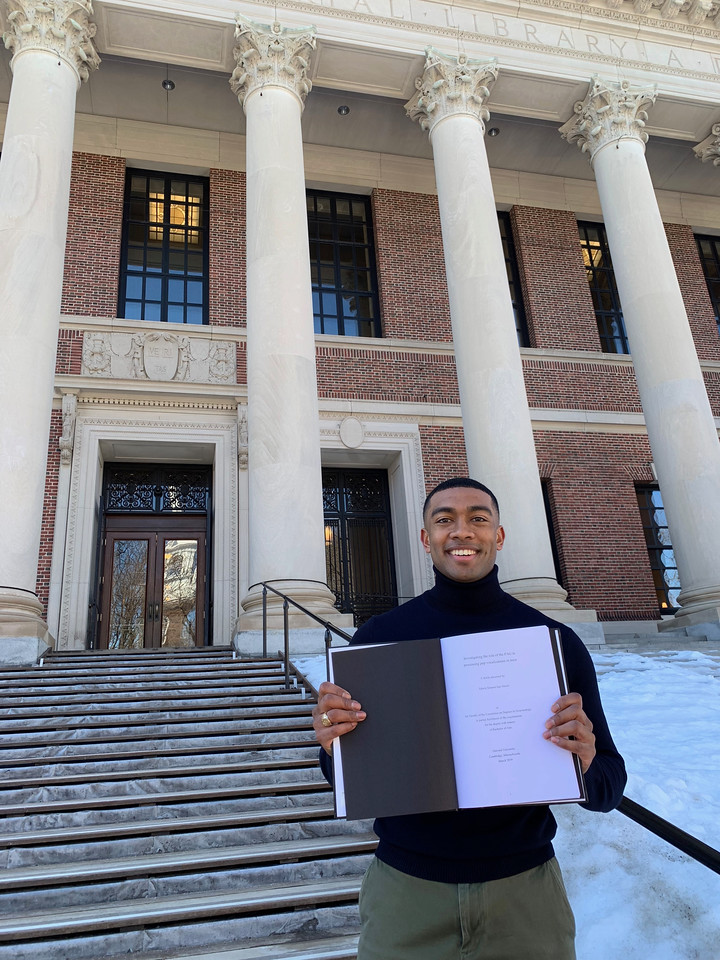 Edwin Owolo, an infielder for Harvard Baseball, wrote his thesis on PAG activity in young mice. By Courtesy of Edwin Owolo

Outside of professional mentors, the fellow student-athlete community provided important support and guidance in navigating the challenges of the dual student/athlete demands.

While some like Rushin were the first team member in her time at Harvard to pursue a thesis, others were able to draw both on current and past teammates for assistance. For Owolo, ex-teammate and engineering concentrator Matt Mink set an important precedent for completing the thesis.

“I already knew what was ahead for me, because he was doing some things at some very odd hours,” Owolo said. “[He was] borrowing my bicycle some times so he could get all the way down to the SEAS building...but knowing that he could do it showed me that I can do it.”

Two of the student-athletes interviewed had projects that directly tied into the experience of playing sports, allowing for another valuable base in which to draw inspiration and suggestions. Bolze’s work, for example, analyzed the microbiome of long-distance runners.

“It was exciting and pretty fun to take that experience from track and somewhat apply it to my research over on the other side of the river,” Bolze said. “...Being able to just discuss the results and other possible implications with my [endurance-running] teammates was pretty fun. They definitely allowed me to change up my perspective at times and gave me insight into what I was looking at.”

Ultimately, this collective experience was a true team effort with advisors, coaches, and fellow teammates all providing distinct support. But the final, completed product was something that each student-athlete took pride in as the paragon of their total experience on campus.

“Proving to myself that I had this goal to write a thesis and I could do it well while also being a rugby player and doing other things was very rewarding by the end,” said Akweley “Q” Okine, who similarly did a sports-related project through understanding how athletic participation can serve as an intervening mechanism in the school-to-prison pipeline.

“Thinking about writing a thesis in the future can be a scary topic, especially when you know you're an athlete and that you know you're going to have that time chunk cut out from the thesis process,” Rushin added. “But I would say absolutely, hundred percent, write one. It is a fantastic experience, not just in scientific discovery, but also in learning about yourself. I think that you learn a lot about what you can handle and what excites you. It's just such a piece of work to be proud of.”

Dragović noted that non-student athletes involved with other large extracurricular activities also go through a similar experience in writing their theses, but in many ways the intangibles learned through basketball such as perseverance did help him complete this project.

“So much of my strength, the biggest project that I’ve done my entire life,” Dragović added. “When I finished it was a big relief. I remember that aside from basketball, I’ve never been that tired in my whole life after the last day. Now looking back, it was definitely rewarding. It is something you created, you worked so many hours, so many readings, so many revisions, so many meetings.”

Through these trials and tribulations, all of the student-athletes interviewed strongly recommended their fellow younger teammates consider devoting time to pursue a thesis. Despite the challenges in terms of scheduling and flexibility, those like Okine believed it is the collective investment that matter in terms of encouraging greater percentages of student-athletes to write theses.

“A lot of the reason why student-athletes might not write theses is because of general flexibility,” Okine said. “...Having their coaches being accommodating to having to miss things occasionally while also having professors make a vested effort to make student-athletes feel like they can write a thesis and that it’s worth it. I think in some concentrations athletes are kind of glossed over or not really taken seriously which is kind of a bummer.”

Although there still appears to be room for improvement, the student-athletes overall believed their experience can be a model for future seniors in their position and contemplating taking the first steps in the process.

“I wouldn't even hesitate to write 10 more theses,” Rushin concluded. “It was a great experience for me.”

For a more detailed look at each student-athlete’s thesis topic, see below.

Thesis: “Investigating the Role of the PAG in Processing Pup Vocalizations in Mice”

Summary: Analyzed what parts of the brain adult mices’ periaqueductal gray (a part of the midbrain important for “flight or fight” autonomic functioning and other behavioral responses) is linked to during baby mice noise-making and the activation levels of those regions. Found evidence of links to the auditory cortex and motor cortex. Advised by Professor Catherine Dulac, the Higgins Professor of Molecular and Cellular Biology.

Accomplishments on the Field: Appeared in 17 career games, with two RBIs and five putouts. Helped the Crimson earn its first Ivy title since 2005 his final season. Drew a walk that kickstarted Harvard’s nine-run, ninth inning against Yale on Apr. 6.

Thesis: “A New Game Plan: Sports as an Intervention in the School-to-Prison Pipeline”

Summary: Conducted interviews with around 20 students who have played sports in high school to understand the role that sports can play in disrupting negative outcomes. Concluded that there was high variability among students about the significance of athletic involvement, but that students appreciated the social network and motivational skills gained through participation. Advised by Professor James Soto Antony, Senior Lecturer and Director of the Higher Education Program at the Harvard Graduate School of Education.

Accomplishments on the Field: Earned an important try in the Ivy Tournament Championship against Dartmouth her senior year, and voted as one of six NIRA All-America selections. Led the Crimson to its first NIRA Championship game appearance in program history this past season and contributed throughout 7s play her sophomore and junior season.

Thesis: “The Role of Authority in Scientific Knowledge Production: The Case of Milutin Milanković and the Astronomical Theory of Climate Change”

Summary: Conducted archival research on the life of a prominent Serbian scientist who was among the first explain the Earth’s long-term climate change effects. Explored how Milanković’s work was gradually accepted by the larger scientific community.

Accomplishments on the Field: Saw action in 24 career games, including 18 starts. Caused 14 turnovers with 24 ground balls in her four seasons. Scooped up a career-high four ground balls against Stanford on Feb. 23, 2018.

Thesis: “Running on Microbes: The Effects of Endurance Running on the Gut Microbiota”

Summary: Studied how the composition of microorganisms in the gastrointestinal

Accomplishments on the Field: Won the Long Jump Event at Harvard-Yale Meet and 4x440yd at the Beantown Challenge his senior year. Holds a long jump personal record of 7.09m. Transfer from the University of Texas, Austin.