When he lost his shoe between the 400m and 500m mark of the race, he had enough of the unnatural motion and kicked it off, exposing his bare foot to the track.
By Mahtab Shihab 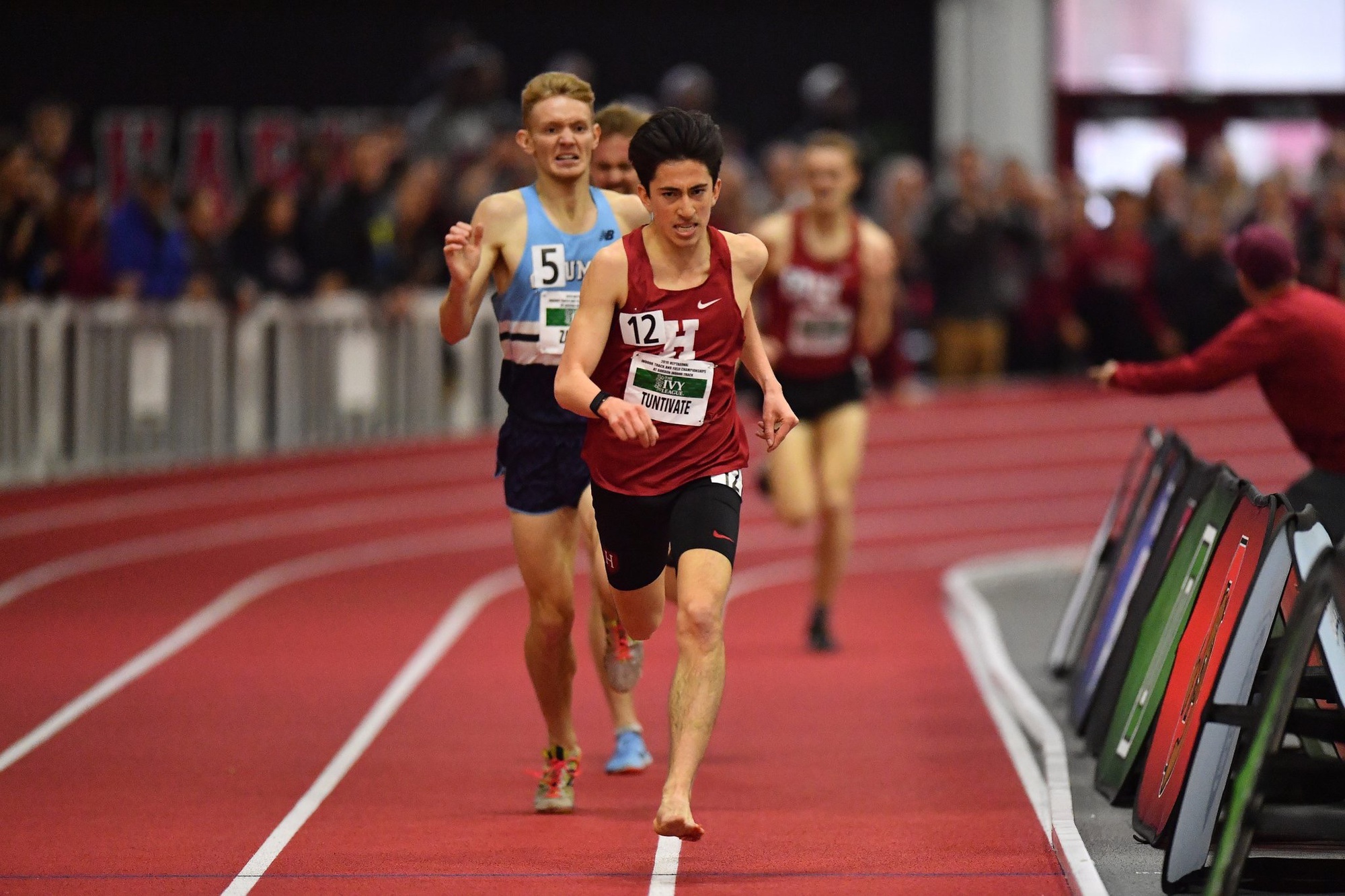 Senior Kieran Tuntivate emerged victorious in both the 3K and 5K races. The 3K win was achieved with one shoe for much of the race. By Courtesy of the Ivy League

The Crimson had a slew of impressive athletic performances in the past year. Whether it be junior point guard Bryce Aiken’s 44 point performance against Columbia that made it onto Sportscenter, freshman Victor Crouin’s individual NCAA championship victory in squash, or sophomore Dean Farris breaking four Harvard school records for the swim team at NCAAs, the individual performances of male Crimson athletes were unprecedented and received national attention.

Nonetheless, one performance that might have gone under the radar was junior distance runner Kieran Tuntivate’s performance at the Indoor Ivy Heptagonal Championships. He swept the 3000m and the 5000m events and was named the Male Most Outstanding Track Performer for the event. However, as impressive as his sweep was, it is how he won the 3000m event that should garner more attention.

Tuntivate ran the majority of the 3000m with only one shoe. Running an 8:12, and averaging a 4:23 mile for almost two miles with both shoes is hard enough; doing so with one shoe is nearly impossible. He was also able to beat an accomplished field of best distance runners in the Ancient Eight, runners who have ran close to four minute miles and won state and national titles.

Tuntivate one-shoe performance was a microcosm of how his indoor season went for him. It was characterized by the necessity to maintain composure even when the circumstances were unexpected and adverse.

“I had a pretty interesting indoor season,” Tuntivate said. “January didn’t go as planned, but then we were able to get in a few good weeks before Heps. We did Monday, Tuesday, and Wednesday as normal, and then dial it back a tiny bit for Thursday and Friday. I tried not to do anything too different and treat it like any other meet.”

Even as someone accustomed with dealing with adversity, losing his shoe in the biggest race of the season was uncharted territory for the junior distance runner. The track usually feels smooth under the soles of spikes or running shoes, but when one’s bare foot touches the track, one truly feels the roughness of the terrain.

Tuntivate’s shoe started slipping off about 300m into the race, creating an uncomfortable motion for him during the first two laps of the race. When he lost his shoe between the 400m and 500m mark of the race, he had enough of the unnatural motion and kicked it off, exposing his bare foot to the track.

“When the shoe came off, I was really flustered for a lap or two,” Tuntivate said. “I knew I wouldn’t run well if I let it get to my head. I took a few deep breaths and just settled in and tried to keep with the pace.”

For distance runners, a preconceived race plan is an imperative part of the preparation before a race. When Tuntivate’s shoe came off, he had to abandon his race plan and gauge the outlook of the race on his own accord while battling the discomfort of running barefoot.

“The mentality going into the 3k was trying to separate 1800 in and try to stay comfortable,” Tuntivate said. “It was completely scratched two laps in. I tried to settle in, and it was definitely uncomfortable the entire time, but I tried just not to think about it. My goal was then to just stay within reach and close hard.”

After adjusting his race plan, Tuntivate was able to power through the next 1500m without much of an issue. However, the pain and discomfort as the pace picked up with 1000m to go. His skin was peeling and he could feel the blisters on his foot. Nevertheless, he resisted the pain to the best of his ability and focused on closing the race as strong as possible. Saving his fastest lap for last, Tuntivate edged past Columbia senior Brian Zabilski, taking home the title.

What is even more remarkable about Tuntivate’s performance, was that he was able to recover in time to win the 5000m event the next day as well.

“I was told to get it wrapped up, have it treated, and don’t put any pressure on it, that way it would heal as much as possible,” Tuntivate said. “As long as I could run, we were going to give it a shot. I warmed up and it hurt pretty bad but still wanted to give it a go.”

Once again enduring the pain, Tuntivate proceeded to win the 5000m in 14:25.32, capping off one of the most impressive weekends by a Harvard athlete.