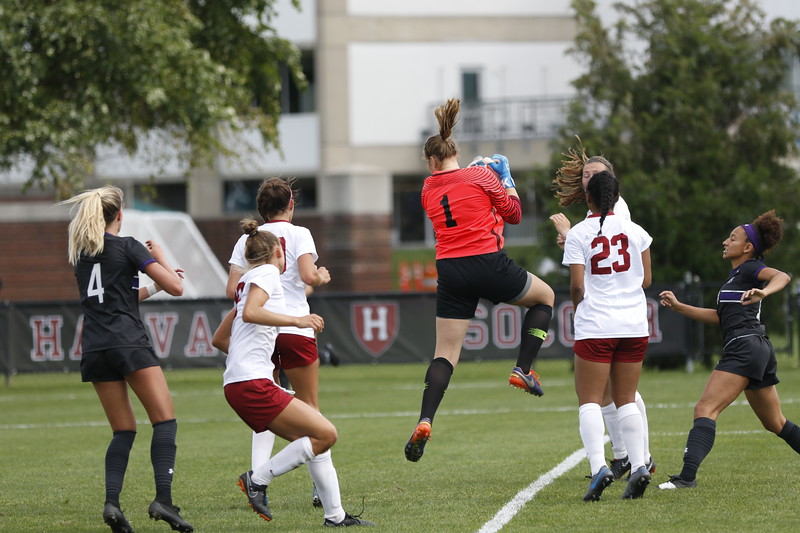 Thanks to superior defense and the work of senior goalkeeper Kat Hess, the Crimson were able to shutout Northwestern. By Timothy R. O'Meara
By Ben Morris, Crimson Staff Writer

Volley goals, flip throws, and complete control. Could you really ask for more?

After a masterful 3-0 performance against Quinnipiac, the Harvard women’s soccer team returned to the pitch to follow up with another dominant 2-0 win in its first-ever game against the Northwestern Wildcats. Despite a relatively close score, it was clear that the Crimson had the overall advantage throughout the game due to its relentless offense, overwhelming defense, and great goalkeeping from senior goalkeeper Kat Hess.

However, despite owning possession and fending off attacks from the Big 10 opponent, this was by no means an easy game. While over 1,000 fans sat in the stands on a nice Sunday afternoon, the women on the field battled through intense competition that only got chippier as the game went on. So much so, that the physicality and aggressiveness escalated to a point that elicited much discontent from fans worrying it could boil out of control.

Yet, the intensity only seemed to drive Harvard even more, as junior forward Murphy Agnew and first-year forward Angela Caloia continuously pierced through the Wildcat defense and pressuring their keeper.

Finally, at the 32:15 mark, the Crimson broke through with a beautiful goal from sophomore midfielder/forward Sophie Hirst on a cross from Agnew. The tie-breaking goal was especially important because, even though Harvard was controlling the game, one small slip up could have resulted in Northwestern grabbing the edge.

When speaking on the timing of the goal, Hirst said, “I think our team felt relieved after I scored because at that point in the game, we were getting chance after chance and we finally converted, so it gave us a second surge of energy to finish the half and the game strong.”

Hirst, who finished second on the team in points last season as a first-year, also spoke to the personal importance of the goal. “It felt awesome to score my first goal in such an important game against a Big 10 team, but I also think it was mostly a feeling of relief to score my first goal somewhat early in the season so I can play more confidently and freely later down the line."

As the first half drew to a close, sophomore defender Jordan Di Verniero made one last attempt at a goal with a flip throw-in from the Wildcat end of the pitch. The move, which she used several times in the game, requires incredible athleticism, and although the ball was cleared out by the NU defense, the play was still talked about by fans throughout the remainder of the game.

The second half began with the same intensity, but this time it only took three minutes and 30 seconds for the Crimson to net its second goal. This one came off the left foot of sophomore forward Trinity Thomas, who also played very well for 80 minutes, after which she was subbed out to a massive ovation.

Northwestern tried to battle back, but the Crimson to thwarted every attack thrown its way, eventually securing their second win (and second shutout) of the young season.

Caloia, who finished the game with two assists, now leads the Crimson with seven points. The first-year is off to a great start, and when asked about the beginning of her collegiate career at Harvard, Caloia said, “The first three games have honestly been such a whirlwind. Obviously we didn’t get the start we wanted with Northeastern, and that was an eye-opener for us. We knew we had the potential, but since then, everyone’s been working that much harder at every practice and I think it’s starting to show on the field. I think the growth already is evident, and everyone is so excited to prove how far we can go. I really can’t overstate the incredible culture of the team. I’ve felt so supported and welcomed every day from all of the returning players, and on game day, the only word I can think of is ‘fun’ because it’s when we get to go out and just play. I wasn’t expecting to feel like I’ve been playing with these girls for so long when really it hasn’t even been a month.”

The team-driven mentality can make a huge difference in any sport, and it seems that this squad is embracing it in every way possible. On Monday, Caloia was named Ivy League Rookie of the Week, but she would not even let this recognition distract from the effort the whole team has been putting in. “I was definitely not expecting it and it feels great, but to be honest, I think the recognition should go to the whole team,” said Caloia. “The performance against Northwestern was huge. I’m extremely grateful and can’t wait to keep getting after it.”

With a 2-1 record, the Crimson is over .500 for the first time this season and looks to continue to build on the recent momentum cultivated by the last two shutouts. With five games remaining until conference play, it appears that Harvard is now hitting its stride perfectly after the initial loss to Northeastern.

Despite the win, no one on the team wants to become content. “Something our team focuses on is to improve with each performance,” said Hirst Meaning,” Even though we got the result, we still find things in that performance that we can learn from and improve in the next game, specifically the quality in the final third since we had so many opportunities and chances but only two goals, and quality in our set pieces. As long as we approach each game with the same intensity and grit, but focus on the little things we try to improve from game to game like technique, we should improve as the season goes on.”

The motivated group will return to the pitch on Tuesday night, where they will face off against another in-state opponent in UMass. If the team continues to play the way they have these past two games, it is going to be an incredibly fun and entertaining season.