Men's Basketball's Haskett, With Support From NBA's Iverson, Excels On and Off the Court 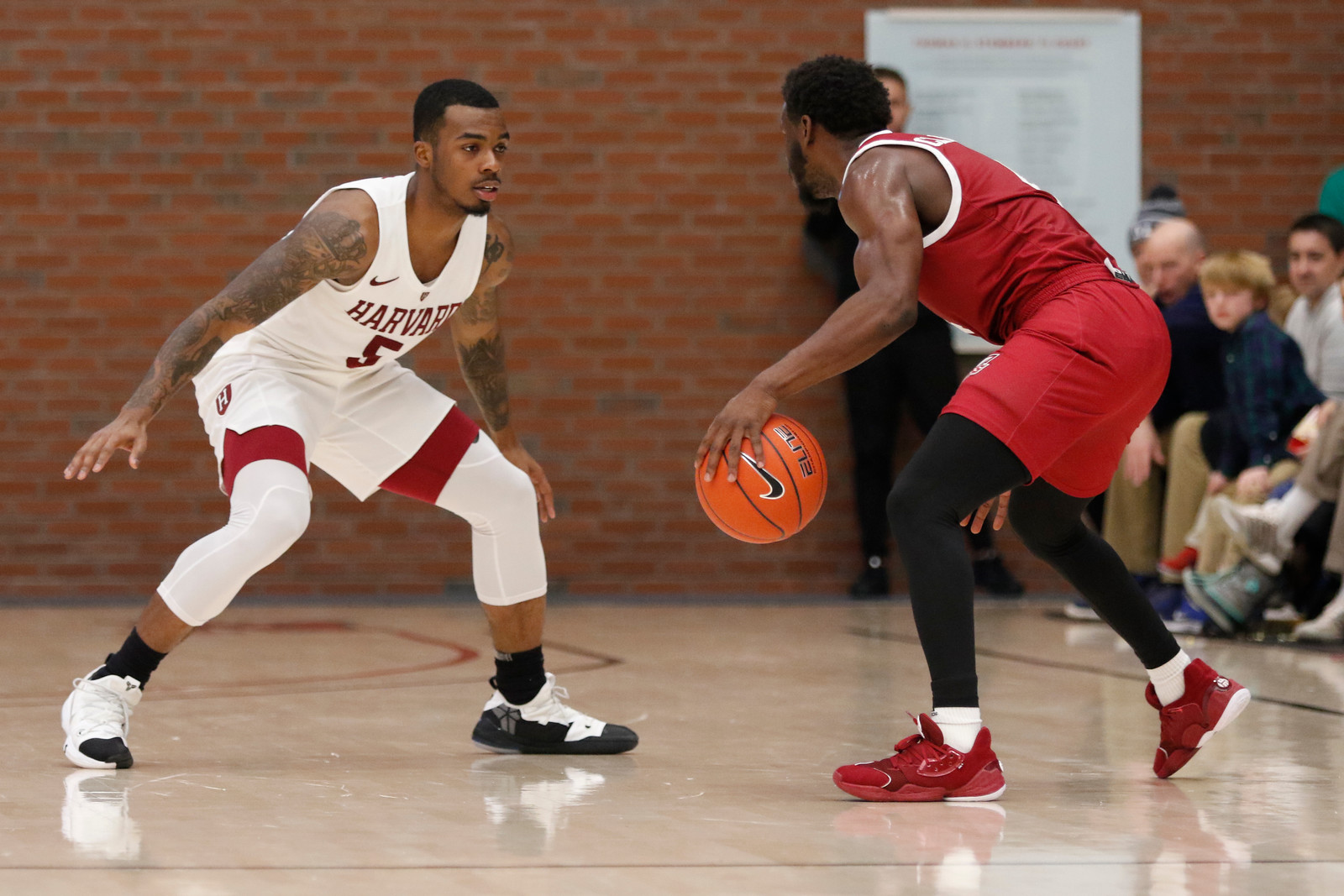 Anyone who has watched the Harvard men’s basketball team play over the last three years has probably quickly noticed Rio Haskett. While Haskett’s numbers rarely jump off the page, the 6’3” junior has been a key part of Coach Tommy Amaker’s rotation since the day he stepped on campus thanks to his knack for hounding opposing ball-handlers and providing a spark and some flair off the bench.

Central Virginian basketball fans certainly understand the difference Haskett can make on the court. The versatile guard attended Lloyd C. Bird High School in Chesterfield, Va., a suburb of Richmond. His high school basketball team won the state championship in his senior year, completing a 27-1 season with a resounding victory over Bethel High School. Watching from the stands that day was Bethel’s most recognizable graduate, one Allen Iverson.

The connection between Haskett and Iverson goes deeper than the fact that they were basketball stars at high schools 75 miles apart on I-64. The Philadelphia 76ers legend grew up in the same neighborhood as Haskett’s father, Mario Haskett, Sr. The elder Haskett went to Warwick High School in Newport News and starred at basketball and football, eventually playing point guard at the historically black Saint Paul’s College, which has since closed, and briefly receiving interest from the Boston Celtics. He played against Iverson growing up, and the two kept in touch. Eventually, the NBA Hall of Famer took an interest in Rio.

“When [Iverson] found out that my dad had a son, he saw me as his nephew,” Haskett said. “So growing up that’s all I knew. Blood or not, he treated me like I was one of his own. In high school he sponsored my AAU team — my first ever AAU team [River City Reign]. So that was just something — just to walk around with his name on my chest, it just felt good.”

Iverson’s presence at the state championship game made the victory even sweeter for Haskett, whose LC Bird team had been Virginia’s Group 5a runner-ups the year before and went 90-11 overall in his career.

“We beat [Bethel] by 20 and I [scored] 20,” Haskett said. “[Iverson] was sitting under the basket and every time I scored I was just looking at him, pointing to him.”

Haskett was not always headed for Harvard. While he was academically driven and was enrolled in LC Bird’s engineering program, his decision to commit to the Crimson was by no means a no-brainer. He received offers from schools that were both closer to home and had more of a basketball pedigree, chief among them Virginia Tech, an Atlantic Coast Conference stalwart. Haskett described a visit to his living room from then-Virginia Tech coach Buzz Williams, who now coaches at Texas A&M and is known for his recruiting acumen.

“Buzz sat right in front of me and my dad, and I don’t know if he and my dad had talked before but Buzz said, ‘we would love to have you but we’ll never get you because you’re bigger than Virginia Tech. You have more to offer than just basketball,’” Haskett said. “When he told me that he kind of shot me down.”

Haskett eventually came to the same conclusion as Coach Williams and his father, who later told Rio that he was going to make him choose Harvard regardless of what his initial decision was, but not before he received some well-timed advice from Iverson.

“He’s actually a big reason I came to Harvard over Virginia Tech and the other schools,” Haskett explained. “I had really big basketball dreams but he told me that one thing he regretted was not thinking ahead of time. He was thinking in the now — big dreams, the lights — he just wanted to play basketball, but he told me that I was special and had so much more to bring to the world than basketball.”

Iverson, who briefly dabbled in rap, was referring in part to the Chesterfield native’s fledgling music career. Haskett became interested in making music in high school and performed his first song at a pep rally in his senior year. He describes that as being a sort of lightbulb moment for him — “that is when I was like — yeah, this is for me,” he said.

While he followed in his father’s footsteps on the basketball court, Haskett credits his uncle with kickstarting his musical education. “Music came from my uncle,” he said. “I was more into it than his own son, so I used to listen to him growing up, and my dad was oblivious to the fact that I was even interested in music.”

In college, Haskett, whose stage name is Spike Foreal, has continued to produce music, and his songs have thousands of listens apiece on SoundCloud. He also recently began a partnership with Billboard Studios of Atlanta, where he now spends a lot of his time working on projects.

On the court, Haskett has also taken his game to another level this year. His hallmark skill, his pesky defense, has been more evident than ever. He has nearly doubled his steal rate and now racks up steals on 3.9 percent of his defensive possessions, a mark that places him 69th nationally — out of upwards of 2,000 qualified players — and second in the Ivy League behind Princeton’s senior guard Jose Morales.

“Rio brings it every time he’s on the court, and you can see it especially defensively,” junior forward Danilo Djuricic, one of the other two members of Harvard’s tight-knit 2017 recruiting class, said. “He is very athletic and very disruptive on defense.”

While Haskett’s defensive presence has been a constant, his offense has improved by leaps and bounds this season. After shooting 34 percent from beyond the arc — where most of his attempts come — in his first two college seasons, he has burgeoned into the Crimson’s best three point shooter, drilling 43 percent of his long range efforts. He is averaging a career high in points while becoming far more efficient from the field and from the free throw line. Haskett is also turning the ball over less even as he creates more turnovers on the defensive end; for the first time in his career, his steals (1.2 per game) come more often than his turnovers (0.9).

Haskett’s offensive potential is especially evident when, at the end of the shot clock, he has on a handful of occasions turned a poor possession into points by knocking down a difficult long range shot or slicing to the basket for a layup. On a team that lacks much in the way of perimeter scoring threats with former Ivy League Players of the Year Bryce Aiken and Seth Towns injured, that is invaluable, and Harvard has been much better this season statistically with Haskett on the court than off it. He proved especially valuable in what was likely the team’s best win of the year, an 84-81 overtime thriller at San Francisco.

For the most part, though, the Crimson has not called upon Haskett to carry much of the offensive load. His usage rate, which measures the percentage of possessions he uses while he is on the floor, has hovered between 15 and 16 percent for the past few seasons, a rate that of Harvard’s regular rotation members is higher than only Justin Bassey’s. That is in part because the junior guard is part of a class that came in right behind Harvard’s historic 2016 recruiting class, which was rich with both quantity and quality and which ESPN ranked 10th in the nation.

Haskett thinks that entering the program after that loaded class has helped him grow as a player. “It was definitely great getting to play against Bryce [Aiken], [Christian] Juzang, and [Justin] Bassey in practice every day freshman year,” he explained. “I think that’s what took my defense from a high school level to just all-around disruptive, because those guys are so good with the ball that I actually had to strap it on every day in practice just to feel like I was staying afloat.”

For all of its success, the Crimson’s senior class has not yet taken Harvard to an NCAA Tournament. This is its last — and with the Ivy League Tournament in Cambridge, probably its best — chance, and it will have to do it without Towns, who has been ruled out for the season, and maybe Aiken, whose return date is unknown.

It is unlikely that Haskett will suddenly become one of the Crimson’s leading scorers down the stretch this year. But Amaker can count on him to contribute consistent effort and disruption on the defensive end, and while Haskett rarely starts games, he is often counted on in high-leverage moments. If he can continue to exhibit the improved shot and ball handling that was evident in non-conference play, he will be a key to Harvard’s chances to end its Tournament drought.