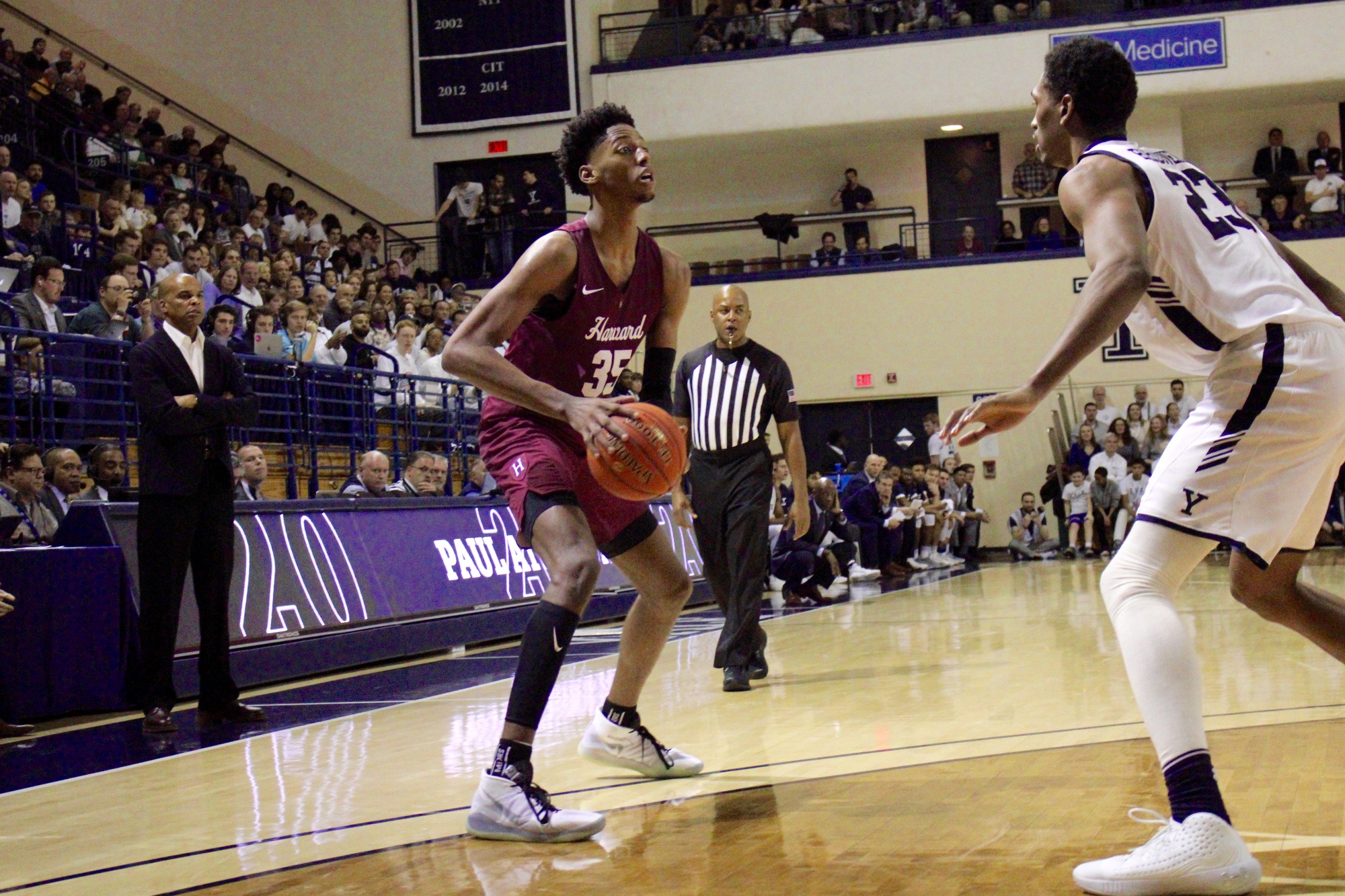 Up by two with under three seconds left, Harvard found itself in a familiar position. It was Brown ball, and the Crimson needed just one defensive stop to come away with the victory.

The prior night, Harvard had bailed Yale out by gifting the Bulldogs with a four-point play opportunity with less than a second remaining. But veteran guard Azar Swain missed the critical free throw to tie the game, and Harvard eked out a one-point victory.

On Saturday night, the Crimson had the opportunity to redeem itself for its late-game blunder in the previous game by getting a defensive stop and closing out the Bears. Instead, junior forward Tamenang Choh drove to the basket and hit a challenging layup while getting fouled. Harvard would not be as lucky this game, as Choh sank the free throw and gave Brown the 73-72 victory.

“We shouldn’t have fouled or have come close to it again,” coach Tommy Amaker said. “It was redundant from last night, but it was a tough call. But the kid made a tough shot and made his free throw.”

Heading into Pizzitola Sports Center for its fifth straight road game, the Crimson (14-7, 3-3 Ivy) had become accustomed to tough nailbiters in its Ivy League matchups, with all of its conference games decided by five points or less. Playing the Bears (11-8, 4-2 Ivy) proved to be no different, as the game played out in typical Ancient Eight fashion. The game was tightly contested, often sluggish, and had a myriad of sloppy possessions from both teams.

Harvard was hurt by foul trouble from the outset of the contest. With seven minutes left to go in the half, the Crimson found itself in the double bonus, which Brown took full advantage of. The Bears shot 20 free throws in the period and made 18 of them. In a half where Harvard shot 52 percent from the field and limited the Bears to 41 percent shooting, the score was tied 39-39.

“Brown played really well and I thought the difference for us was our inability to keep them off the foul line,” Amaker said. “It’s really hard when they’re making their free throws. They made 28/32 and we need to do a better job of keeping them off the line especially when they’re cashing it in.”

Foul trouble also kept key members of the rotation off the court. Senior guard Christian Juzang only played four minutes in the first period because of his two early fouls, while senior forward Chris Lewis picked up his fourth foul with eight minutes left in the game and had to leave the game in its critical moments.

“It was tough,” senior forward Justin Bassey said. “We had to go pretty deep into our bench and our bench was able to give us a good lift but losing some of our key guys early on really hurt us. We gotta clean up though. You know it's on us, and it's about us to make sure that we're playing great defense without fouling.”

The Crimson also had a tough time guarding senior guard Brandon Anderson, whose 22 points led the way for Brown. Anderson had only averaged 11.5 points on 39 percent shooting heading into this matchup, but was able to take advantage of Harvard’s foul trouble and score a significant portion of his points from the free-throw line.

“He's always played well against us and you know he's very fast and shifty and quick with the ball and because he gets downhill,” Amaker said. “We're scrambling a little bit and then he can get into your body to the foul go to the free-throw line. He got nine against us so he gets to the line and cashes in. That’s part of their arsenal and game plan against us.”

With turnovers and fouls hindering the Crimson scoring attack, senior forward Rob Baker was an offensive bright spot for the team. Baker scored a career-high 18 points on 58 percent shooting from the field. The Woodstock, Ga. native was also 3-5 from three-point range, while the rest of the team was a combined 4-18.

“He made some tremendous plays for us with his scoring,” Amaker said. “He did a lot of things for us that helped us stay in the game.”

The leadership of Baker and the rest of experienced veterans on the team will be critical as Harvard enters a four-game homestand in its conference play.

“We've been in this position before throughout the years especially with older guys knowing a lot about how do we regroup and respond,” Bassey said. “We come together and set a precedent, and it's great that we have the opportunity to do that at home after a tough two weekends. We have to learn from our mistakes in the past and make sure we’re not putting ourselves in these positions again.”

The Crimson looks to reverse its fortunes as it goes back to Lavietes and hopes to secure home wins against Columbia and Cornell next week.

— Staff writer Mahtab Shihab can be reached at mahtab.shihab@thecrimson.com