The Long Road Back: Reed Farley's Return to Men's Basketball

It had been 755 days — 2 years and 25 days — since Reed Farley last played in a game for Harvard men’s basketball.
By Amir Mamdani 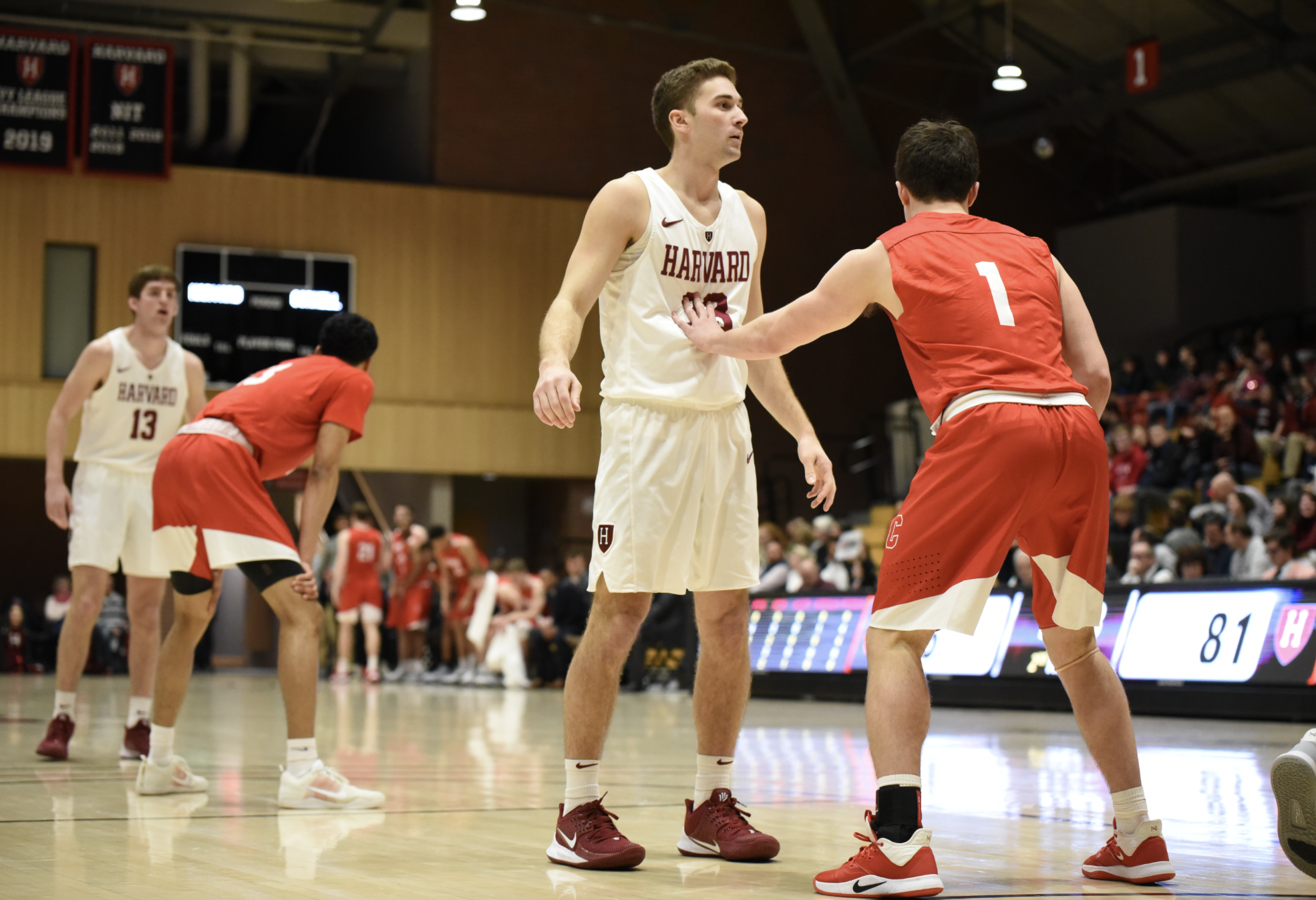 Junior Reed Farley returns to the court for the first time since January 20, 2018. By Erica Denhoff

It had been 755 days — 2 years and 25 days — since Reed Farley last played in a game for Harvard men’s basketball.

But with three minutes to play in the Crimson’s Valentine’s Day contest against Cornell, the 6’4 junior stripped off his warmup shirt, and walked down to the scorer’s table, before entering for his first action since January 20th, 2018. Although the appearance won’t necessarily pop out of the box score or show up in the highlight reel, it was a special moment that was hardly lost on his teammates, friends, and family, who were in the crowd on Friday night.

“It was surreal,” Farley said. “It was a really rewarding and fulfilling moment to be out there with the guys and the Harvard across my chest in front of my family, because there were definitely some times over the past two years when I wondered if it would ever happen again.”

For a player beleaguered by devastating knee injuries that can so often permanently derail a career, Farley’s return represented much more than just another appearance in the game log. And although his only attempt rimmed out from three-point territory, it barely mattered.

For the juniors and seniors that have seen the La Jolla, Ca., native endure an ACL reconstruction, multiple meniscus surgeries, a litany of other medical issues, and two long years of rehab, just his presence was more than enough.

“It’s amazing,” said senior guard Justin Bassey, of seeing Farley take to the Lavietes Pavilion floor once again. “We’ve all been rooting for him, and it’s awesome that he had the opportunity to do that with his family here.”

Of all the qualities that Farley espouses, it’s his steadfastness and consistent emotional boost, that his teammates have come to love and expect from the man who wears No. 33. Over the past two years, the 6’4 guard has been a fixture, his spot on the bench firmly entrenched as he donned coat-and-tie without fail, whether it be at home against UMass or nearly 3,000 miles away at Cal Berkeley. His desire to stay active and involved with the team throughout his rehab has always been on full display. There is perhaps no better example of this than Farley’s repertoire of celebrations, which are frequently captured by cameras and television broadcasts alike. 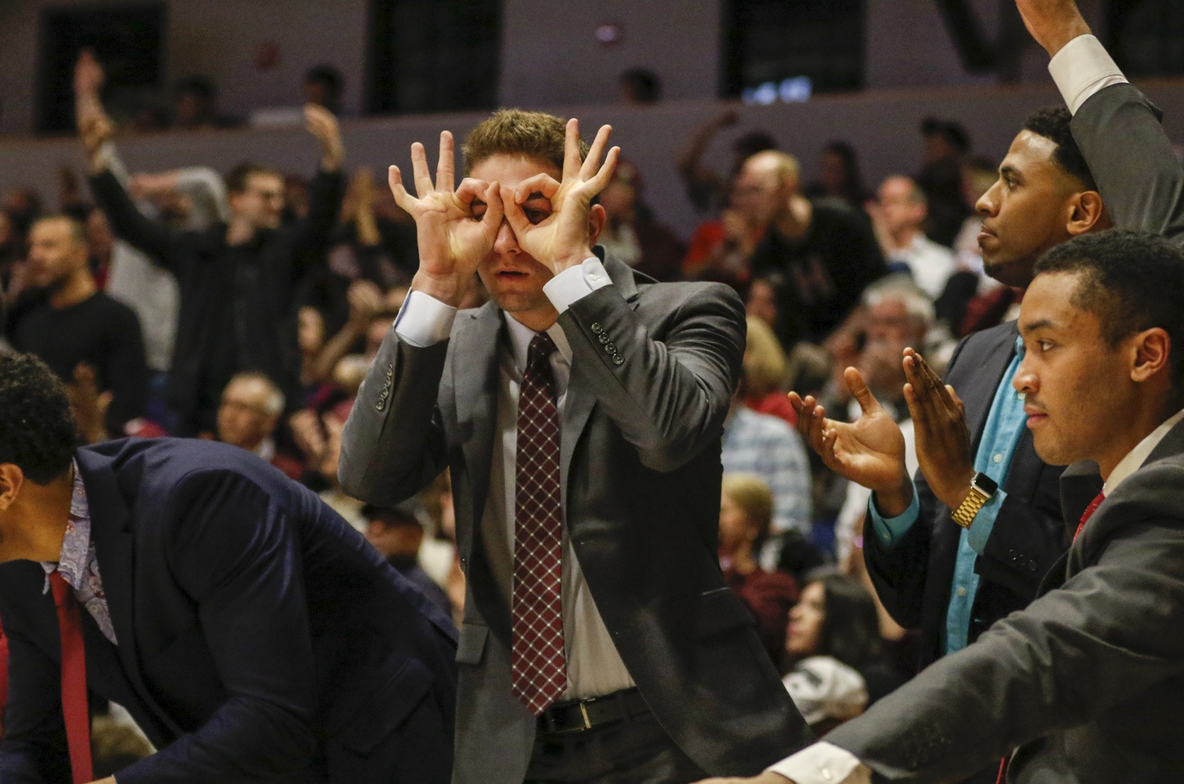 An injured Farley celebrates a three-pointer in a crucial win over Penn last season By Timothy R. O'Meara

“Bringing the energy every time, whether I’m on the court or off it, that was my way of making sure I was staying engaged,” Farley explained. “I wanted to make sure I still felt like I was a contributing member of this team.”

But don’t let his attitude fool you — the road back to the Lavietes Pavilion court has hardly been a smooth one for the junior. A torn ACL in his senior year of high school was just the first in a long series of injuries that would complicate the road to playing basketball again. In his first year in Cambridge, Farley tore his meniscus for the first time in practice, missing the rest of the season and rehabbing for months before tearing it once again shortly after his return. Months of surgeries and rehab turned into years, during a time that the La Jolla, Ca., native openly admitted was emotionally and mentally taxing.

“It’s definitely been a grind, honestly, mentally more than physically,” Farley said of his long recovery. “I did a lot of soul searching, really trying to fight through it and keep going. This is the team that I always wanted to play for, so I never thought I’d give up or give in or anything like that.”

His first appearance back — a modest three minutes off the bench — might not seem that significant, but anyone who’s been around Harvard Basketball, or Farley, knows better. In a way, it was a return to the normalcy of playing basketball, a game that’s taken him to venues as grand as Lexington’s Rupp Arena, where he drilled two three pointers as a freshman against John Calipari’s then-No. 19 Kentucky in front of a crowd of nearly 23,000. 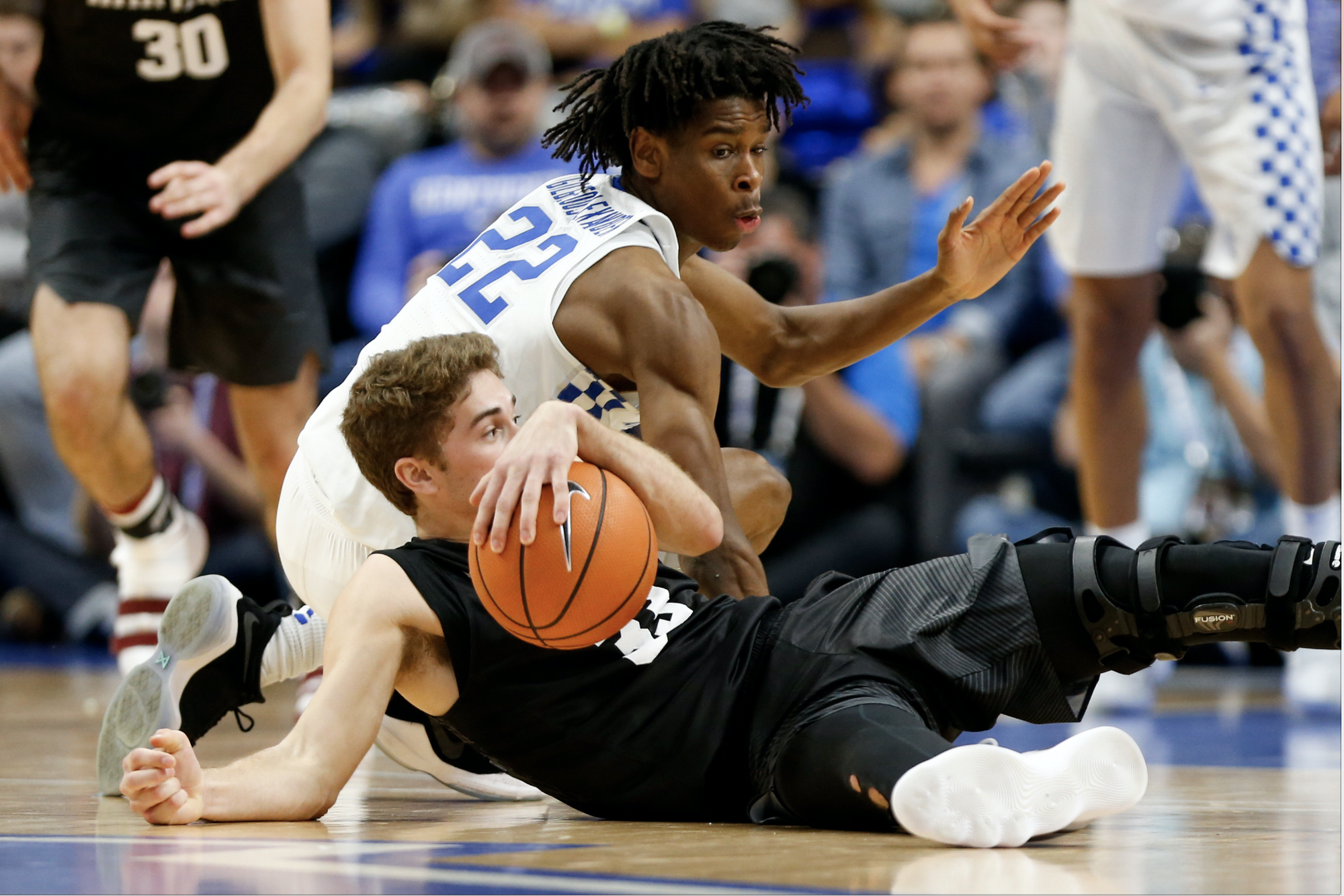 Farley diving to the ground in front of Kentucky's Shai Gilgeous-Alexander, now a member of the Oklahoma City Thunder averaging nearly 20 points per game. By Courtesy Photo

For Farley, a shooting guard who averaged nearly 20 points per game as a senior in the suburbs of San Diego, playing against Cornell represented the end of a very long road that started over two years ago. His ACL reconstruction, multiple meniscus surgeries, PRP injections, and a removed blood clot are all part of the medical history that make Farley’s reappearance on the court all the more impressive.

“Big moment,” said Coach Tommy Amaker of Farley’s return, citing the team’s collective excitement to see the shooting guard take his place on the court again. “As someone who’s been out for quite some time, and has given a lot to get himself in position to play again.”

It seems appropriate that during this season, a year in which Harvard men’s basketball will seek to exorcise its demons and return to the NCAA Tournament for the first time in four campaigns, that Farley’s return should come as the Ivy League race heats up. And while his contributions are likely to be more significant from the perspective of being a good teammate, as he’s frequently mentioned as one of the more vocal and intelligent basketball minds shouting instructions from the bench, it remains significant that the junior is once again suiting up.

For all those that consider him a friend or a teammate, seeing No. 33 on the court once again has provided an emotional boost, an inspiration of sorts. And in doing so, Farley hopes he can be a part of something much bigger than himself — a return to March Madness.

With three weeks remaining in the Ivy League season, and the Ivy League Tournament less than a month away, the time for a push is now for a Crimson team that wants to go dancing on Selection Sunday. Harvard is one of five teams that are all separated by just one game in the Ancient Eight standings, but only four of those teams can end up in the playoffs, which will be hosted in Cambridge.

“We know Ivy Basketball is hard, but the team’s starting to understand that we need to come out every night for a fight,” Farley said. “Having four of our last six games at home is great, we love that home court advantage and I think everyone’s fired up.”

It remains to be seen whether or not 2020 will prove to be the year that Coach Amaker’s lauded senior recruiting class finally makes the Big Dance. There are high hopes for a Harvard team that will host Penn and Princeton in absolutely vital matchups this weekend at Lavietes Pavilion.

Many questions about this team and its ability to reach the NCAA Tournament still remain. But whether it’s participating in layup lines, three-point drills, and laughing with his teammates, or calling out screens and defensive instructions from the bench, of one thing, you can be absolutely sure.

After two long years, Reed Farley is exactly where he’s supposed to be.