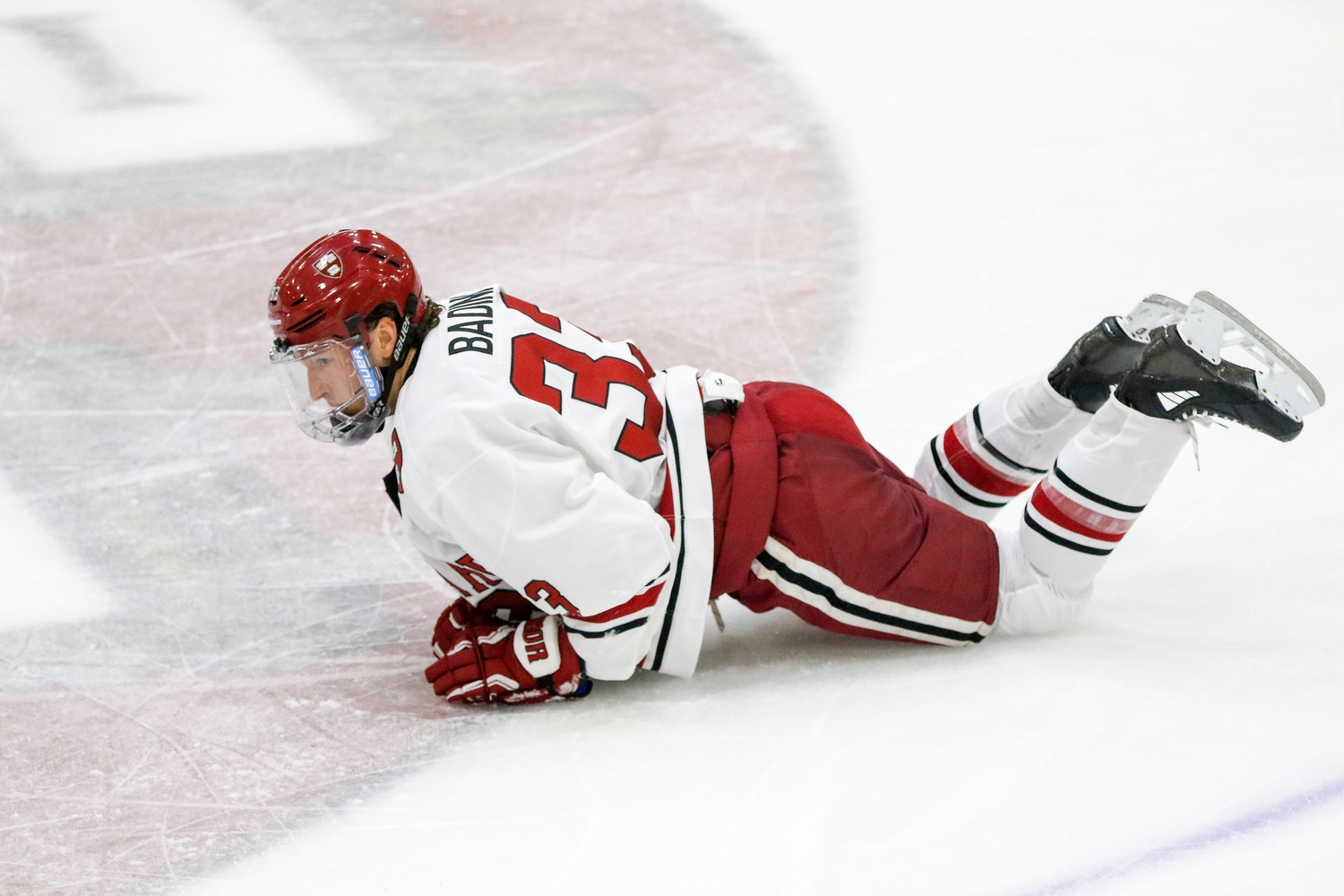 Just one day after a marquee win over No. 5/6 Clarkson, the Crimson suffered its most disappointing loss of the season at the hands of the Saints on Saturday. By Timothy R. O'Meara
By Spencer R. Morris, Crimson Staff Writer

CANTON, N.Y. — Ahead of Saturday night, the Harvard men’s hockey team had not claimed four points on its North Country road trip since 2016-2017. It had a prime chance to overwrite that fact, as it had already pocketed an impressive win against No. 5/6 Clarkson the night prior.

With the upset victory, the Saints (4-24-4, 2-17-1) picked up just their second ECAC triumph and, amazingly, their first win at Appleton Arena this season.

“The hungrier team was on the other side of the ice,” Harvard coach Ted Donato ’91 said. “We had talked pretty extensively as to what we were going to see: a proud group of seniors on senior night…. We expected them to come out with some emotion and energy and passion, and they did. Quite frankly, we didn’t respond to it very well.”

For the Crimson, the disappointing setback ends a 10-game winning streak against St. Lawrence dating back to Feb. 20, 2015.

From the opening puck drop, the Saints controlled play with their physicality and sustained offensive-zone pressure. Fast-forward to the final five minutes of the second period, and St. Lawrence sophomore Kaden Pickering found twine for his team’s fourth tally.

Harvard failed to break the puck out of its zone cleanly, and the shifty forward took advantage, beating Crimson net-minder Mitchell Gibson (5 GA, .839 SV%) on a follow-up chance.

“I don’t think that the final score is something that we can say we deserved better [than], because we didn’t,” coach Donato said. “We got outplayed. They had more chances, more passion, and for us to think anything else would be foolish.”

An overwhelming first 40 minutes from the Saints, punctuated by Pickering’s game-winner, proved too much to recover from. Harvard made things interesting in the third period, though.

Down 4-0, the visitors potted a powerplay goal five minutes into the final frame, courtesy of freshman forward John Farinacci’s wrist shot from the slot.

Harvard’s greatest sign of life in the third came after freshman defenseman Ryan Siedem’s shorthanded tuck. Junior centerman Jack Badini found a crashing Siedem from behind the net for a tap-in.

With two and a half minutes to go in regulation, coach Donato pulled Cameron Gornet (0 GA, 1.000 SV%), who replaced Gibson after the Saints’ fifth lamp-lighter, for the extra attacker. But the comeback effort ended there.

“We knew we had to push, no matter what the scenario was,” Crimson captain Nathan Krusko said. “We were able to continue to grab some momentum. I thought our third period was resilient…. We did make a strong push, but at the end of the day, you can’t dig yourself that big of a hole and expect to get out of it.”

The Saints stung the Crimson in the first minute of the game. After a keep-in at the blue line and effective cycling along the wall, junior forward Callum Cusinato fed sophomore Andrew McIntyre from behind the net. McIntyre bumped the puck past the left pad of Gibson to stun the heavily favored visitors.

The ice-breaker was emblematic of St. Lawrence’s formidable performance, in which it threw both shots and bodies at the Crimson. And the Saints were not finished doing damage in the frame.

An oppressive offensive-zone shift culminated in sophomore forward David Jankowski cashing in on an exhausted five Harvard skaters. Jankowski’s third of the season cued the roars from within Appleton Arena, as the hosts mounted an early two-goal lead on a ranked opponent despite entering the contest in dead last in the Pairwise rankings.

“We knew they were going to come out hard,” Krusko said. “We were just hesitant and slow to get to our game. We had a lot of guys expecting someone else to make the big play…and that showed out with our tough and slow start.”

So, St. Lawrence punched the Crimson in the mouth early and continued its dominance through the second stanza.

Overall, its six goals on Saturday represent a season high. And despite the Saints’ lackluster record in 2019-2020, the hometown crowd was raucous upon witnessing its only victory on familiar ice this year — on senior night no less.

Harvard’s loss soils the emotional high of Friday’s statement win over the Golden Knights. The program, still with its eyes on a top-four finish in the ECAC, will close out its regular-season slate at home next weekend.