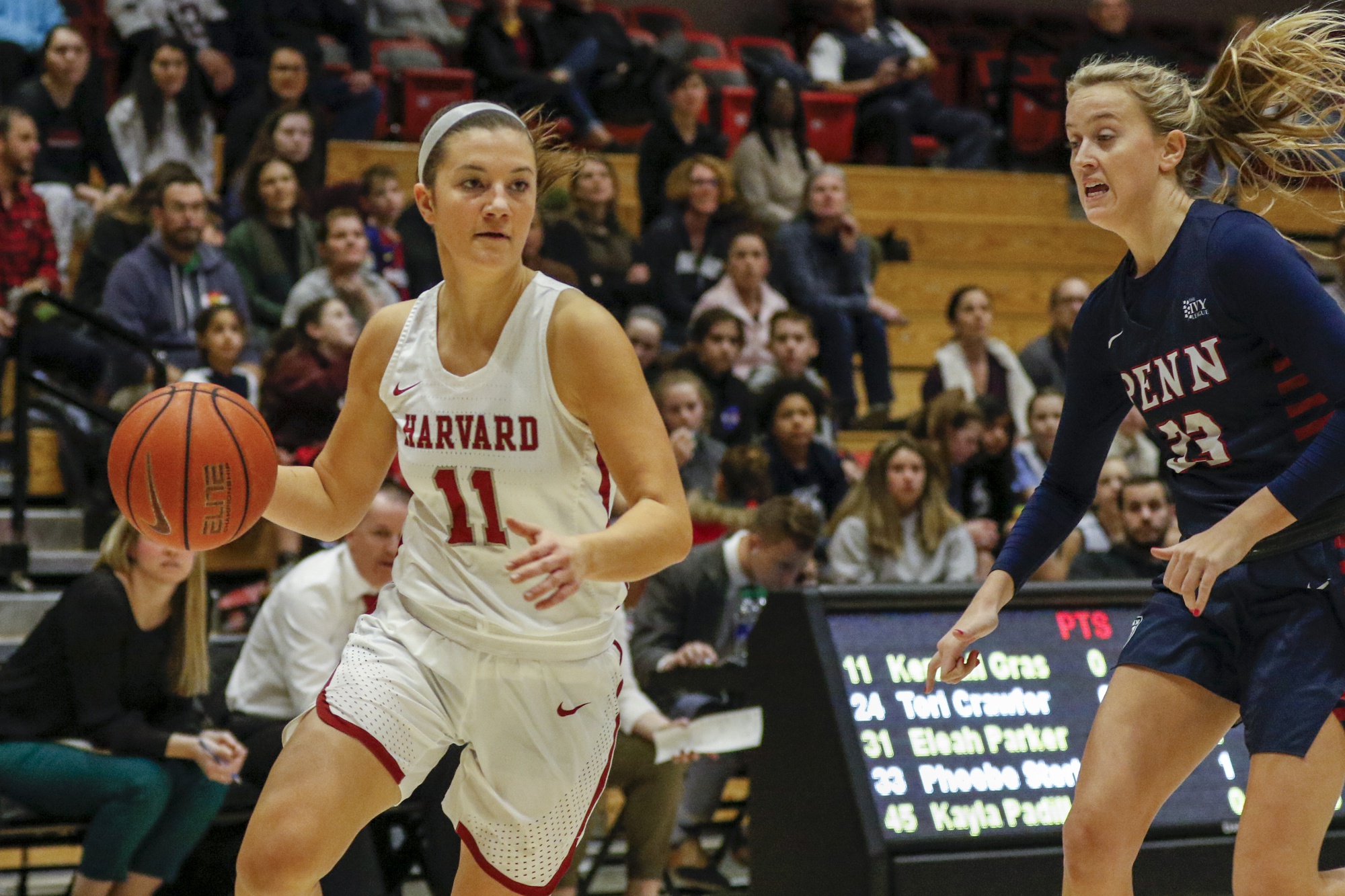 Sophomore Maggie McCarthy drives to the hoop against Penn in the first meeting between the two. Head coach Kathy Delaney-Smith wants the guard to shoot the ball more in the future. By Timothy R. O'Meara
By A.J. Dilts, Contributing Writer

With postseason play fast approaching, Harvard faced a difficult road trip against the Ivy League’s top two teams this past weekend. After suffering a 66-45 loss Friday night to league-leading No. 25 Princeton, the Crimson struggled again Saturday in a 70-48 defeat to Penn.

The shooting woes from last weekend’s loss at Columbia followed Harvard (14-9, 5-5 Ivy League) into New Jersey Friday night against Princeton (21-1, 9-0), as the Crimson shot just 26% from the field and 18% from the three-point line. No starters managed to score in double figures, and junior forward Maddie Stuhlreyer led the offense with a career-high 11 points off the bench.

The struggles offensively were apparent from the start, with Princeton jumping out to an early 9-2 lead. After Harvard cut the Tiger lead to two midway through the first quarter, though, a series of empty looks from three and missed layups inside gave Princeton a comfortable 17-7 lead heading into the second quarter.

“We talked about throwing the first punch,” said head coach Kathy Delaney-Smith. I felt we tried hard to prepare to throw the first punch. Four of the first five possessions were turnovers. Our top two scorers shot very poorly. The shots are not that much different. We feed off of [their scoring]. We have shooting nights like that, and we can’t start every game with turnovers like we have.”

The Crimson did shoot a perfect six-for-six at the free throw line Friday night. Despite this efficiency, shooting from the foul line only six times compared to Princeton’s 25 attempts points to Harvard’s difficulty in forcing the issue inside the paint. This lack of aggression spread into play on the fastbreak, where the Crimson was outscored 12-0.

“We better run, we were all about running,” said Delaney-Smith following the loss. “We were back on our heels [Friday night]. We are a good running team [...], and that hasn’t shown up.”

As the turnovers and poor shooting continued, the 12-point lead Princeton enjoyed at halftime slowly grew to 20 through the third and fourth quarters. This provided an opportunity, however, for Coach Delaney-Smith to give some of her more inexperienced, younger players valuable playing time against a nationally-ranked opponent.

“I think my bench is pretty young, so I don’t always expect for them to have enormous stats. The fact that Maddie [Stuhlreyer] was able to score for us is a good thing,” said Delaney-Smith.

The Crimson hit the road once again to face conference rival Penn (17-5, 7-2) on Saturday, with the hungry Quaker squad seeking to avenge its loss in Cambridge earlier this season and solidify its strong second-place position in the Ivy League standings.

Mirroring the beginning of Friday night’s contest, poor shooting and turnovers from Harvard allowed Penn to jump out to an early 12-0 lead. Much needed first quarter offense came from triples from sophomore guard Maggie McCarthy and freshman guard Lola Mullaney, but the Crimson’s 3:7 assist-to-turnover ratio gave Penn a comfortable 24-10 lead by the quarter’s end.

Sophomore guard Tess Sussman and her four first half field goals led Harvard in a much stronger effort to close out the half, as the Quakers only outscored the Crimson by two in the second quarter. Sussman turned in a solid eight-rebound, three-assist performance, tying Mullaney with a game-high ten points as well. McCarthy, the third starter in Delaney-Smith’s three guard lineup, shot a perfect three-for-three from the three-point line and added six rebounds.

“We want McCarthy to shoot more, she doesn’t shoot enough,” said Delaney-Smith. “We have to put [the poor shooting] behind us, we have to get in the gym and put shots up and make adjustments.”

The offensive woes also carried over to the defensive end of the floor, an area Harvard has taken immense pride in all season long.

Bright spots for the Crimson continue to be found on the bench, where Delaney-Smith once again gave extended playing time to seven reserves. Freshman guard Annie Stritzel built off her strong play last weekend with seven-points, three-steals, and many hustle plays that do not appear in the box score but add value to her time on the court.

Harvard is eager to return to Lavietes Pavilion this weekend for its final regular season home contests after the demanding four-game road stretch. The Crimson will take on the surging Columbia Lions (15-8, 6-4) on Friday and look to improve its seeding in the conference tournament with Saturday’s matchup against the Cornell Big Red (9-13, 2-8).