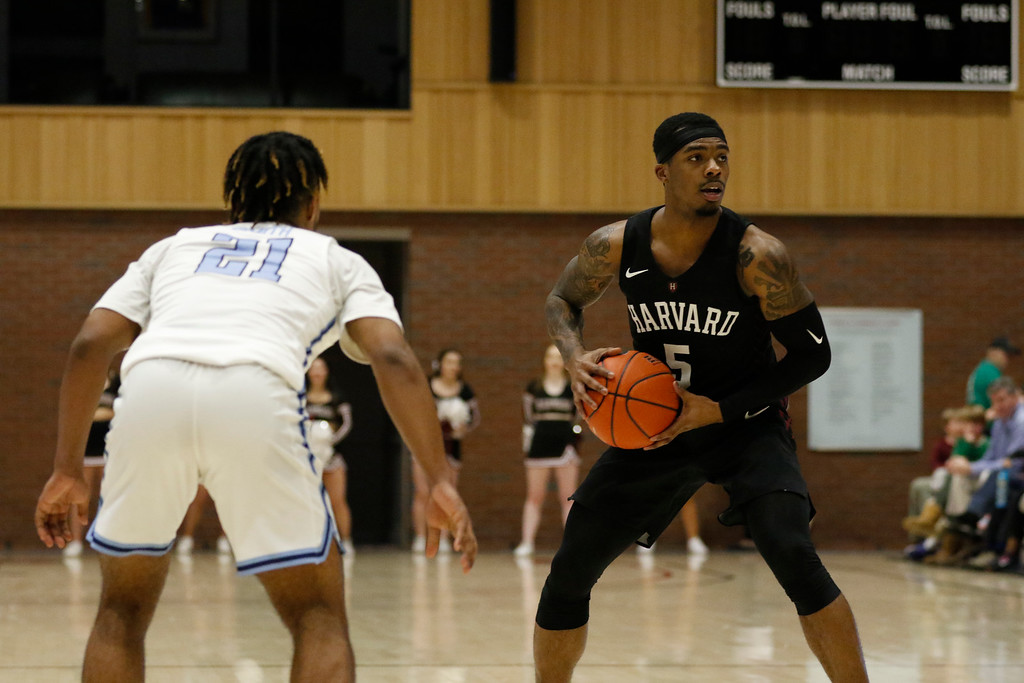 Scoring a career-high 19 points on the night, Rio Haskett led Harvard in the second half to sweep Columbia in the regular season By Timothy R. O'Meara
By David Manikas, Crimson Staff Writer

The ball hit the rim and play continued as Columbia’s Ike Nweke snagged the rebound and pushed it the other way. Yet senior guard Christian Juzang, just missing the attempt, remained. Laying down and grimacing with pain, the Tarzana, California native clutched his ankle with his hands. Shortly after a foul stopped play, coaches and managers rushed onto the court to see what went wrong. It was clear he could not continue. Juzang, who has excelled in stepping into the role of team leader this season, was gone. Somebody else had to step in.

With their past three meetings extending into overtime, Harvard could not seem to shake off Columbia regardless of the Lions’ ranking in the Ivy League. Heading into Saturday, the Lions were last in the conference, defeating only Cornell before going on a ten-game losing streak. Nevertheless, the Crimson’s tendency to play close games this year made expectations no different for the matchup between the two-seed and the eight-seed.

It took fifty minutes the first time these two teams met this season for Harvard to pull away, as senior guard Mike Smith exploded for 37 points to keep the Lions’ hope for a second conference win alive. To prevent another dominant performance by Smith, coach Tommy Amaker matched Justin Bassey with Columbia’s scoring leader to start the game. Bassey’s relentless defense to start the game clearly bothered Smith, who opened shooting three-for-eight, forcing up shots in an attempt to get a rhythm going.

Whenever Bassey would head for the bench, junior guard Rio Haskett took his place defensively, consistently denying Smith the ball and keeping position in front of him whenever the Illinois native looked to attack. The nation’s eighth-leading scorer was held to eight points in the first half, eleven less than his first-half output two weeks ago.

Smith wasn’t the only struggling offensively in the first frame of play, however. It seemed like the three-point shooting trend from the two teams’ first meeting, where the Crimson made eight of 43 attempts, carried over to Levien Gymnasium. Harvard opened the game shooting two for 14 from behind the arc and the Lions hit only three of 11 three point attempts in the first twenty minutes of play.

Looking to get going offensively, Amaker’s emphasis on “bench and balance” was seen early, with substitutes contributing to sixteen of the team’s 32 first-half points. Sophomore Mason Forbes contributed back-to-back baskets as soon as he entered the game, adding two free throws to finish the game with six points. Chris Ledlum had a slow offensive start to the night with three points in the first half but made up for it on the defensive end, coming up with four rebounds and an emphatic chase-down block on Mike Smith’s fast-break layup attempt.

For Ledlum and fellow freshman Idan Tretout, tonight’s game held particularly more importance than for the rest of the team. It was a homecoming for the two New York natives, returning to the city and to Levien Gymnasium after playing there this past summer in the Pro City Basketball League. The two were met by friends and family who packed the stands, holding Fatheads of Tretout’s face and cheering both on when they stepped onto the court in the first half.

As the half progressed and the bench began to contribute to the game, the Crimson fell into a rhythm: holding the Lions to a scoring drought and putting together short runs to extend the lead to five. Things seemed to be going smoothly, with Harvard only looking to turn up the intensity in the second half. With 50 seconds to go in the half, Juzang would attempt his last shot of the game, landing awkwardly before being helped off the court by his teammates.

With the second half starting, Harvard had to find someone else to step up as a leader.

“Our guys are all understanding that we are on to the next play and the next guy,” Amaker said. “That’s because of us playing with a lot of different guys throughout the course of the season.”

From the start of the half, however, they looked like a different team. Five straight Crimson turnovers led to a 8-0 Columbia run in 90 seconds, tying the game at 37. To make matters even worse, Columbia’s Mike Smith--who was thought to have been contained in the first half--was merely waiting for the second half to get started. Smith scored the Lions’ first 14 points to open the half, hoping to capitalize on the Crimson’s unfortunate situation. He would go on to score 12 more points in the half, ending with 34 on the night.

The Crimson quickly had to find a response to maintain their lead. Juzang, sitting on the bench with ice on his foot extending to the last few seats, nevertheless had his head in the game. He would get up on crutches during timeouts and make his way behind the bench to give advice to players getting some rest time before heading back in. A vocal leader on the court was still missing, however.

Embodying the “next man up” mentality, Rio Haskett stepped right in and made it his responsibility to navigate the offense. The junior would go bucket-for-bucket with Smith, unleashing tears where it seemed like no defender on the court could contain him. On the other side of the floor, his hustle created Columbia turnovers that would ultimately keep them from making another major run. An array of three pointers, layups, and floaters all added up to his fifteen points in the second half, contributing to a career-high 19 on the night on 8-10 shooting.

“First priority was picking up where we left off on defense,” said Haskett. “Once I did that, I kind of got into a rhythm where I was able to take advantage of them in transition.”

To complement Haskett, the hometown hero Chris Ledlum would put up 12 points in the second half himself, helping create an 11 point cushion with just under two minutes to go. Although he was playing in his hometown for the first time in his young college career, he did not let the stage get to his head.

“I was concerned about the energy and all that brings for a young player,” said Amaker. “I thought he handled it great.”

Bassey’s 12 points and eleven rebounds on the night summarized his impact on both ends of the floor, helping end the streak of overtime games with Columbia. Chris Lewis continued his impressive offensive season, scoring in double digits yet again in what seems to be a regular occurrence now.

Despite Mike Smith’s impressive offensive display, the rest of the team’s lack of support made another tight contest between the two sides more difficult. The total team effort by the Crimson led them to pulling away 77-69 to earn a win on the first leg of their New York trip.

“One of coach’s big things is ‘stay ready so you don’t have to get ready',” Ledlum said. “Everyone on the team stepped up.”

Harvard remains the second seed in the Ivy League after Yale’s stunning comeback against Penn tonight. With three games remaining before the Ivy League tournament, the Crimson look to make a jump to the number one seed to have the best possible chance at going dancing in March.

This push for the Ivy League title will continue tomorrow, as the Crimson face against Cornell in Ithaca. Tip off is at 6 pm in Newman Arena.