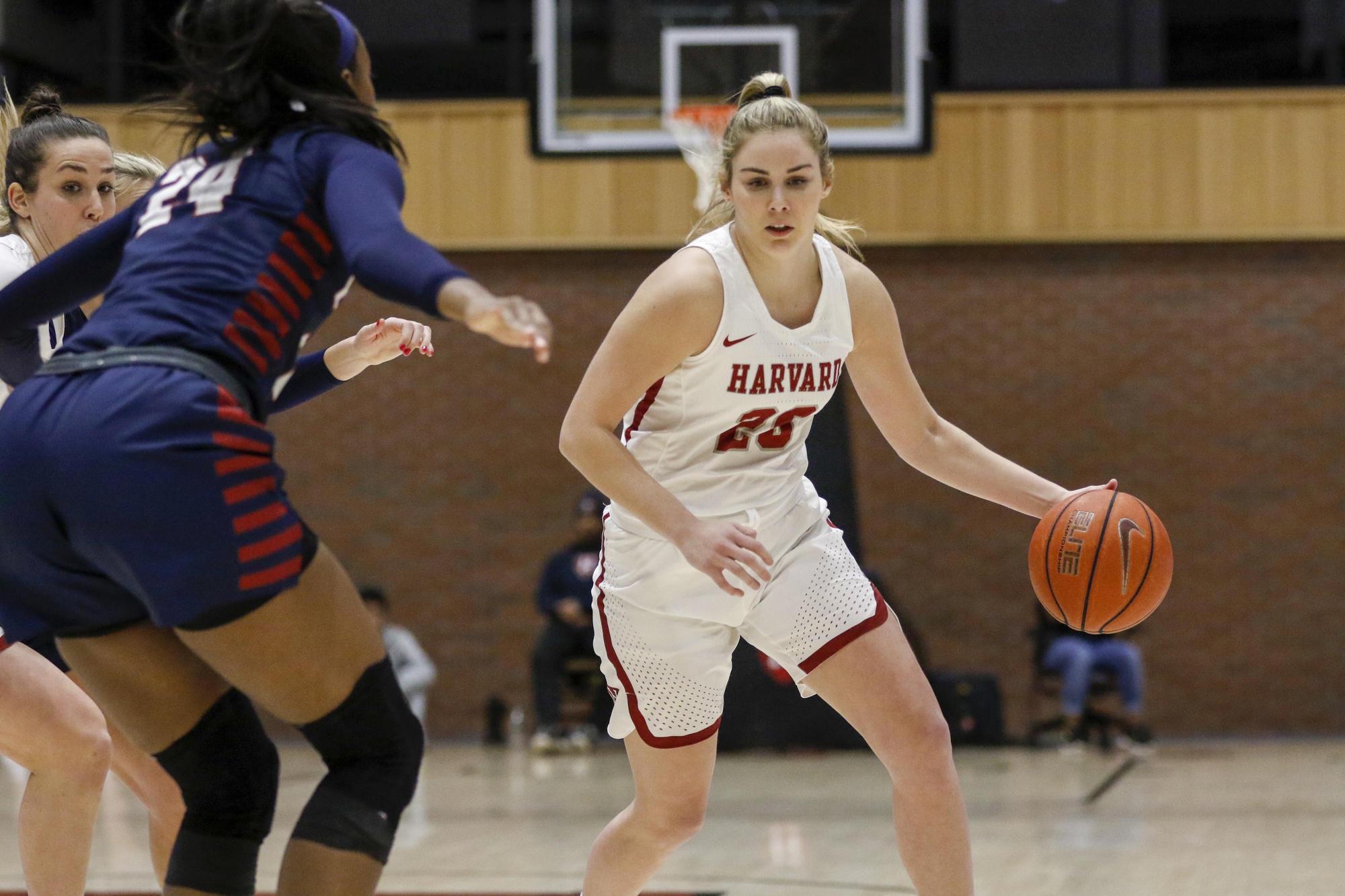 Lola Mullaney leads the team in scoring and three-pointers so far this season through 17 games. By Timothy R. O'Meara
By Henry Zhu, Crimson Staff Writer

Of Coach Kathy Delaney-Smith’s 38 seasons commanding the Harvard bench, the 2019-20 campaign could have easily been written off as a ‘transition year’.

The Crimson lost just shy of 58 percent of its scoring from last season, much of what constituted the on-court core and off-court heart of the program. Lead scorer Katie Benzan elected to sit out her senior season to preserve her graduate eligibility, while Harvard also bid farewell to sharpshooter Madeline Raster, slasher Sydney Skinner, rhythm-disrupter Nani Redford, and energy-deliverer Kelsey Bogdan to graduation.

Only three of the eight returners had averaged more than 10 minutes per game last season, one of whom — lead rebounder Jadyn Bush — would be sidelined for much of the 2019-20 campaign due to offseason shoulder surgery. Further complicating matters to start this season for Coach Delaney-Smith was that she did not even have enough healthy bodies for a full 5-on-5 in practice, due to a bevy of smaller injuries.

“We arrived on the first opening day of preseason and there were no forwards,” Delaney-Smith said. “Oh my god, every single one of them was out. Maddie [Stuhlreyer], Rachel [Levy], Jadyn [Bush], Jeannie [Boehm], Maria [Guramare], all of them gone.”

That first practice, in many ways, perfectly represented the tabula rasa from which Delaney-Smith, co-captains Levy and Mackenzie Barta, and the team’s veterans have had to mold this brand-new team featuring five first-years and four new starters. But in an unpredictable season that could have gone down the wrong path, the Crimson has retooled and embraced a new set of principles — playing more selflessly and building composure in high-pressure situations, taking pride on the defensive end, and retaining a focus on delivering points from beyond the arc.

And although this team is nowhere near perfect, there have been several glimpses — including this weekend’s win over Penn in which it avenged last season’s blowout Ivy Tournament loss — that showed that this side may have more to give than simply building for the future.

Sitting 2-2 in Ivy play, the 2019-2020 Crimson side is unquestionably building an intriguing on-court product that is worth keeping an eye on.

Dispersed throughout conversations with the team this season is the word selfless.

“I was a bit unsure going into this season about who we would be, [but] I have nothing but positive things to say about this team,” stated senior forward Jeannie Boehm following the team’s win over FAU in late December. “As I mentioned, I think our strong suit is...the selfless basketball we're playing. I think every game we have a different high scorer and no one cares. And so I think that's the beauty of this team.”

As alluded to by Boehm, the Crimson has indeed featured seven players who have been the lead scorers in their 17 games this season. There is no question that first-year Lola Mullaney, who Delaney-Smith called at the very start of the season her team’s “superstar” and has topped the Crimson’s scoring sheet in 10 of those games, has been the key focus on opposing scouting reports.

Currently leading the Crimson and sixth in the Ivies in scoring at 15.3 points per game, the Colts Neck, N.J., native has impressed notably from beyond the arc, where she is shooting at a 36 percent clip and has converted an average of 3.3 makes per game.

But with the range of scoring options on this team — including breakout sophomores Maggie McCarthy and Tess Sussman who transitioned from bench contributors to regular starters this season — the expectation is not for Lola to take full responsibility for the team’s offensive production, according to Delaney-Smith.

“When you have someone that can score like Lola, now everyone stops scoring and they look for Lola — well, I don't want that,” Delaney-Smith said. “You know, we had a little bit of that with Katie Benzan. I don't want that.”

To facilitate scoring opportunities, the team has relied on McCarthy to play out of position at the point guard position, something teammates and coaches have lauded her for embracing. Fifth among Ivy players in assists this season at 3.3 per game, McCarthy also leads the Ancient Eight in minutes played.

“She's just a sophomore, she didn't play a ton of minutes last year, so she's become like our floor leader,” Barta said. “Our point guard, doing all of the intangible things, and I know that might not show up on the scoresheet, but we definitely all appreciate it. So I think she's one of the most gritty players.”

With McCarthy making this transition and Sussman also moving from a guard to forward this season, Delaney-Smith noted a particular challenge this year has been balancing the more pedagogical side of coaching with allowing her players to establish chemistry and rhythm to their games.

“But the only way to get them to connect with each other is to play five-on-five,” Delaney-Smith said. “So I have to balance out what skills we work on individually, time being the big issue here, and then how much five-on-five?”

The Harvard coach complemented the five freshmen’s acuity in picking up her schematic system early on in the season, but has acknowledged there is still a learning curve towards building a fully cohesive unit. Still, players such as Barta have noted the equally important role of leadership in creating a more consistent and composed team.

“Everyone's a great basketball player on this team and has confidence, so I think it's just bringing a team together and maintaining that poise is something I found really important,” Barta said.

Facing pressure and defenders who “get up in your grill” continues to be the major focus on this relatively inexperienced side, but the team is confident that it is making progress in slowing the game down.

“I think it's gonna be something we're gonna have to continue to work on,” Levy said. “I think any team not just us specifically, like, that's really hard to play against when someone's up on you and you have to work to get open every single time down the court. But I think that that's fixable… so it's just something we keep on pumping and practice to keep working on.”

As the offense continues its acclimation process, the Crimson has established its core identity around limiting its opponents on the defensive end.

“I think we take we need to take a lot of pride in our identity as a defensive team,” said Boehm. “We're really, really good.”

“I think their work ethic is especially deep in the defensive end, game in and game out,” added Delaney-Smith. “Yeah, that's where they're at their best. That's our strength.”

Over the course of this past season, the Crimson has held opponents to an average of 55.2 points per game, about a nine-point improvement from last season. Furthermore, opponent field-goal percentage, which currently sits at 36.2, has also dropped by about four points. On the defensive boards, Harvard tops the Ancient Eight with 29.7 rebounds per game.

These metrics reveal what has been spoken in words, that the gritty nature of this team this season has shown itself in full force on the less glamorous side of the court.

“Defense is all heart, and it's not technique,” Delaney-Smith said. “It's just how hard are you willing to work and I think we work really hard. We still make mistakes, but as long as you work hard, it's okay.”

Of the Crimson’s 11 wins, four have come in games where the offense has scored less than 60 points, including the most recent 58-51 victory over Penn. If difficult droughts of scoring or messy play pervades during spurts of inconsistency, this young and inexperienced team will likely need to depend on that inner defensive drive to eke out victories.

Gone is program triples record-holder Katie Benzan, who was responsible for 34.3 percent of all Crimson three-point attempts last season. As a team, the Crimson averaged 28.1 attempts from deep last season, with 43.5 percent of all field goals coming from behind the arc.

But from the simple eye-test and across various metrics, Harvard’s reliance on the triple has not waned one bit, as shooting numbers are also close to on-par with last year’s roster.

Starting with Lola Mullaney — Benzan’s replacement in many ways as the team’s primary scorer and three-point weapon — the stat sheet shows that she is shooting about 9.06 triples per game, with an accuracy of 36.0 percent. Katie shot at a similar quantity (9.63/G) and success rate (35.6%), although Mullaney is less dependent on the triple in her overall shot selection. 61.5 percent of Lola’s shot attempts this season are from deep, compared to Benzan’s 77.06 percent.

Complementing Mullaney are mainly McCarthy, Sussman, Barta, and Levy, who have collectively converted on 77 triples this season. Barta has been the most accurate from that group outside of Mullaney, knocking down 33 percent of her attempts.

“I think that we have a lot of great shooters on our team which makes us really valuable because you can't just lock in on one person,” Mullaney said. “And when we're hitting our shots especially from three, we tend to get bigger leads right from the start.”

From a spacing perspective, the Crimson’s current clip of 25.9 triple attempts per game has also preserved much of the room for post-dependent Boehm to operate. As has been the case for the past four seasons, Harvard has relied on Boehm’s interior prowess to counterbalance its perimeter shooting — the senior is on pace for her best scoring season with current point averages of 9.8 PPG over 198 shot attempts.

“I've been fortunate to play with great three point shooters throughout my career, but I think this year we have so many of them,” Boehm said. “And so it's nice for me because if they double, somebody is open. It's nice to have that back and forth and not feel frustrated if there's congestion in the post.”

The Crimson currently pace the Ivy League in three-pointers made per game at 8.2, but look to improve upon its 31.6 percent conversion rate (currently sixth in the Ancient Eight). With 45.7 percent of its shots coming from deep (a 2-plus percent uptick from last season), there is no turning back on this offense’s reliance on the triple to get points on the board.

This past Saturday, the Crimson faced off against Princeton and fell by a 60-46 score against the one-loss Ivy powerhouses. In the face of an apparent leg injury to co-captain Barta early in the second quarter, the team fought valiantly but could not withstand a third-quarter sprint from the Tigers.

Post-game, Coach Delaney-Smith delivered a notably confident pronouncement about her team, one that very much contextualized the progress the Crimson had made since its very beginnings in September.

“As big as everybody builds Princeton out to be, I think on any given night, if we keep growing and God willing we get Jadyn back, I think [Princeton] is a beatable team. So that's what I'm hoping for.”

With a month-and-change left in the Ivy season, there is evidently a continued emphasis on growth and unity in this young roster. But infused throughout the developmental process, there also appears to be a healthy dose of optimism and confidence that this tight-knit unit can in fact exceed expectations.