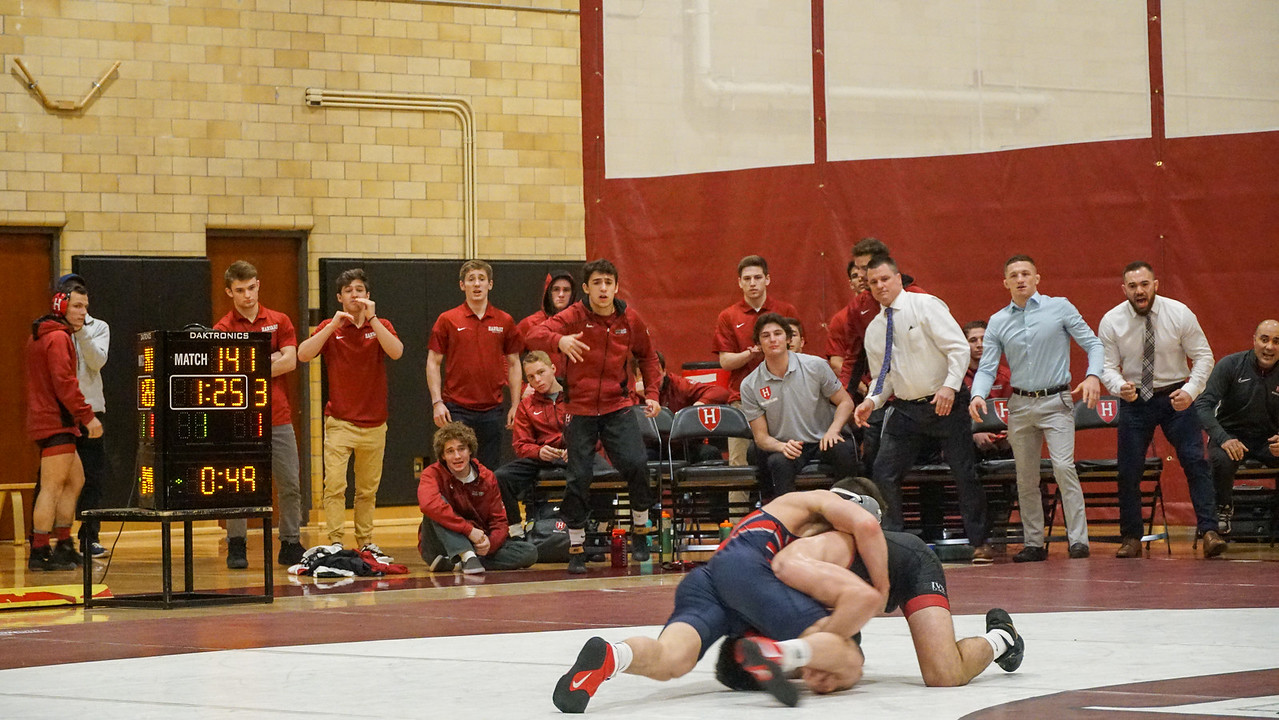 Harvard’s wrestling team fell to Ancient Eight rivals in Princeton and Penn this past weekend. Despite a lack of success in dual meets, the Crimson has amassed impressive performances at tournaments, including three individual wins and 17 top-eight finishes.
By Nicholas Daley, Crimson Staff Writer

Up against the 16th-ranked Tigers on Friday night, the Crimson was energized and showed no signs of backing down. Harvard found itself down early after a clinical performance from Princeton’s Pat Glory, number three in the nation at 125 pounds, who started off the evening with a pin. In the third match, however, Junior Lukus Stricker came up with a major victory, coming from behind in the final period to beat Princeton’s Marshall Keller 8-6. Senior Aaron Kruk followed him up by holding on for a tight 3-1 victory at 149 to bring the match to 9-6.

With a chance to tie the match, senior captain Hunter Ladnier took the mat to face Quincy Monday, the fourth-best 157-pounder in the country.

“That was a big match,” Harvard coach Jay Weiss said. “It didn’t start out great - Hunter got down, but he just kept at it. That was one of the best matches I’ve seen Hunter wrestle.”

Late in the third period, with Monday barely clinging to a lead and appearing fatigued, Princeton challenged a takedown near the edge of the mat, giving Monday an extra two points, and — more importantly — a chance to rest. Ladnier scored a late takedown to bring the score within one, but ran out of time, losing 9-8. Tempers flared, with one Crimson coach yelling and shoving his finger in the direction of the Princeton bench, but the Tigers had already secured a six point cushion, a lead they wouldn’t give up for the rest of the match.

Harvard’s pair of Freshman phenoms, No. 17 165 Phil Conigliaro — a Massachusetts native wrestling in front of a number of his high school coaches and teammates — and No. 10 Heavyweight Yaraslau Slavikowsi, took care of business as usual, each securing comfortable decisions. Princeton nonetheless pulled away for a 27-12 victory.

The next night against Penn, Stricker almost secured another big win for the Crimson to start things off, but the Quakers’ 19th-ranked 141 Doug Zapf stole a 3-2 win in the final seconds. Penn secured a major decision in the 149 bout, but a strong 14-1 major from Ladnier followed by a comfortable 11-4 victory for Conigliaro tied the match at 7-7. The Crimson continued to stay within arms length thanks to wins by Mike Doggett and Slavikowski. But with Harvard down by six and needing wins in its final two bouts to avoid the loss, Penn’s national No. 8 125 Michael Colaiocco proved to be too much, earning a major decision that put the Crimson away for good.

It has been a season of ups and downs so far for the Crimson. The team has racked up three individual tournament wins (two from Conigliaro and one from Ladnier) and 17 top-eight finishes overall, and posted an impressive team showing at the prestigious Midlands Tournament, finishing 15th in a field of 35 that included five of the top ten teams in the nation and ten of the top 25.

But Harvard has also found wins hard to come by in dual meets, hobbled by injuries and unable to compete with the deep lineups of some of the best teams in the nation, like No. 4 Arizona State and No. 11 Iowa State. Despite its losing record, the Crimson have reason to feel optimistic about their year thanks to the starpower of a team built for postseason tournaments.

“Our young guys are competing hard and at a high level, obviously with two guys ranked in the top 15, but I think there’s more to it,” Weiss said. We’re obviously a better tournament team, just with our lineup the way it is right now… I like where we’re at.”

With a weekend off from competition coming up, Harvard is in the midst of their most difficult week of training as they look forward to finishing the dual season strong and delivering at EIWAs. But their season likely won’t end there; in Conigliaro and Slavikowski, they have a chance to make a splash on college wrestling’s biggest stage.

“The goal is obviously to win a title, to place in the NCAA tournament, to be an All-American,” Weiss said. “That’s on their mind for sure.”