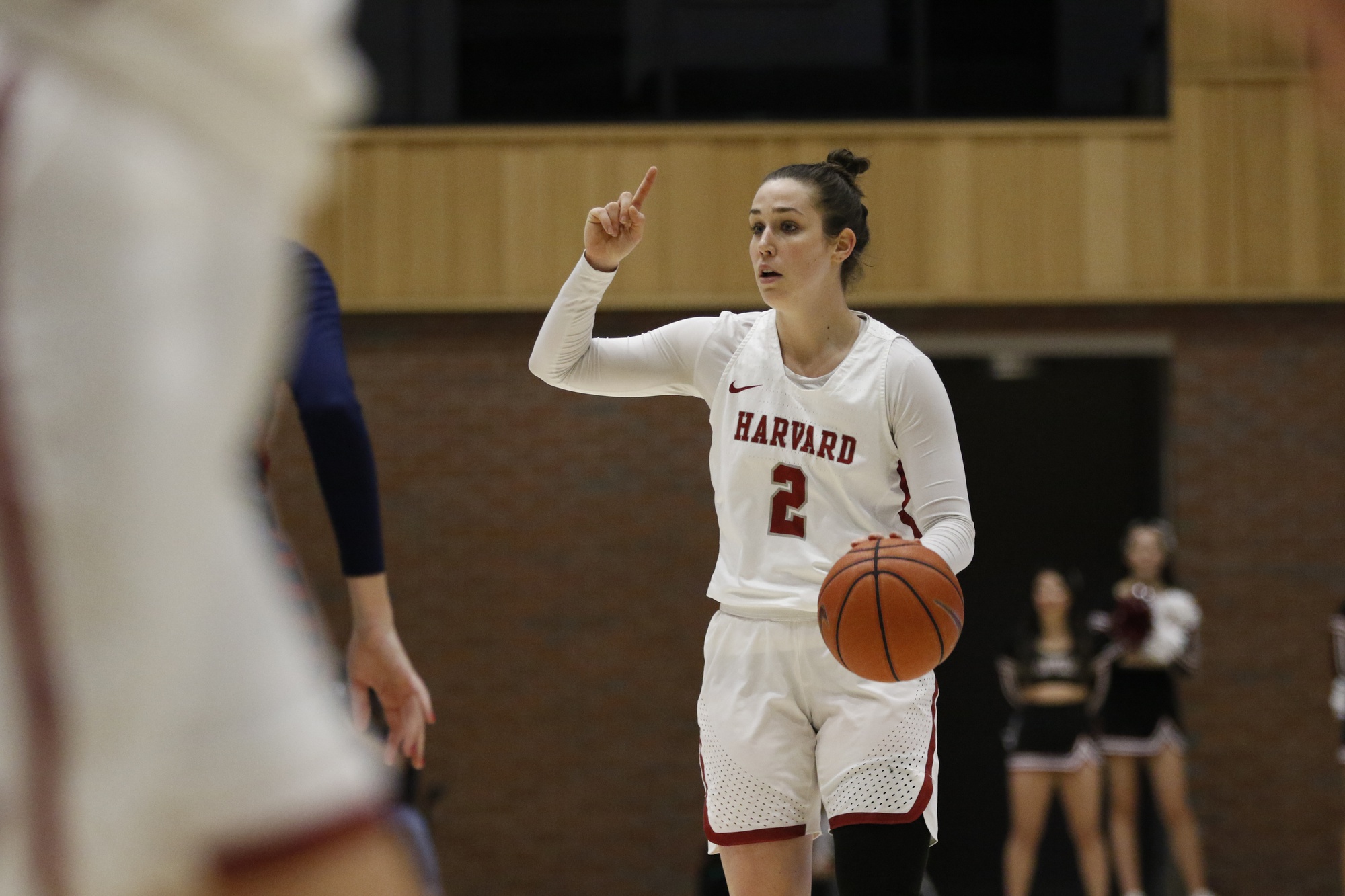 A day after a resounding 66-57 victory over previously-undefeated Yale, the Crimson (13-6, 4-2) capped off its extended five-game homestand with a dominant 68-53 win over Brown.

Four Crimson players — Lola Mullaney, Tess Sussman, Maggie McCarthy, Rachel Levy — finished in double-digits, with Mullaney leading the side with 14 points. Sussman’s 11-point, 11-rebound night gave her the first double-double of her career, as well as her fourth double-digit performance of the season.

“It's really awesome,” Sussman said. “I haven't really been a scorer in the past, but with Kenzie out now [Coach] Kathy [Delaney-Smith]'s kind of asked me to step up. I like to pass it a lot more so I feel a lot more confident. It is helping me going to more tough games, so honestly it's just making me look more forward to the future.”

The Crimson saw every single member of its squad earn playing time in this contest, including double-digit minutes from first-years Gabby Donaldson, Annie Stritzel, and Sara Park. The trio combined for 14 points to fill out Harvard’s total bench scoring, with the team collectively shooting 38.6 percent from the field and 42.9 percent from beyond the arc.

“I thought Gabby did a good job tonight,” Coach Delaney-Smith said. “I don't know if you could tell, but I think Gabby has an enormous skill set..Sara is an unbelievable shooter. She’s small, but her defense is deceptively good. So again we're trying to get those kids minutes because I think as we get to the second round, it’s going to be important.”

Sussman noted how the team as a collective unit is beginning to find its rhythm offensively and made the necessary adjustments to maintain its double-digit lead for most of the contest.

“I'm just really proud of our team, we kept it together and finally started to execute on the offensive end which we've kind of been struggling with,” Sussman said. “So it's really nice to find connections, but as we've seen in the past we kept up our good defense.”

The Bears converted on no more than five field goals per quarter and were limited to just 21 points entering halftime. Led by McKenna Dale’s 15 points, Brown largely ecked out points through intermittent triples and struggled to garner any consistent stretch of play outside of the final few minutes. Although the Bears now own a 1-5 Ivy record, Delaney-Smith acknowledged the competitiveness of that side in a league with increased parity.

“They are dangerous,” Delaney-Smith said. “They hit a couple threes, it could have gone either way. We could have been back on our heels...so there's just not a gimme here at all.”

The Crimson started sluggishly, converting on just one basket in the opening four minutes. But its three-point shooting began to get back into gear, with back-to-back triples from McCarthy and Mullaney. Harvard then strung together another trio of consecutive triples, featuring swishes from junior co-captain Rachel Levy, Mullaney, and Sussman. Brown was limited to just 3-of-12 shooting in the first frame, including a scoreless final 3:19 that saw Harvard carve out a 19-10 margin.

The accuracy from deep continued as McCarthy immediately drained a corner triple in the second quarter’s first possession. The Bears would not find the bottom of the net until the 5:39 mark of the quarter — by that point, the Crimson had built up its lead to 16. McCarthy capped off the period with an acrobatic finish at the rim, pushing her scoring total to double-digits (10) to lead the team at intermission.

Compared to the prior day’s matchup against Yale, Harvard matched up against a team with much less height and size. As anticipated, the Crimson capitalized on the boards, out-rebounding the Bears 48 to 30 while tallying seven rejections in the contest.

With co-captain Mackenzie Barta sidelined, the Crimson continued to experiment with their options off the bench. First-years Sara Park and Annie Stritzel earned a combined 11 minutes in the first half, with Park — a clear perimeter weapon for Harvard — contributing her third triple of the season.

“Since so many of them haven't had playing time before — our four freshmen — I can't imagine what they're feeling,” Sussman said. “But they do so amazingly, even if they play for five to 17 minutes. Everyone has stepped into the role that they need to be, and more.”

Coach Delaney-Smith once again turned deep within her bench for relief in the third quarter, this time inserting junior Maddie Stuhlreyer and first-year Gabby Donaldson into the contest. Like Park, Donaldson introduced herself to the Lavietes crowd with a confident three. Sussman notched a trey of her own in the dying seconds of the frame, giving the Crimson a 53-35 lead.

Harvard closed out the final period continuing its balanced attack, with Stritzel earning four quick points thanks to two drives at the rim. Sussman delivered her third triple of the contest to cement her first double-double of the season (11 pts, 11 rebounds), joining Levy who finished with a 10-point, 10-rebound night. To close the game, Delaney-Smith rested most of her starters, allowing for an extended look at the bevy of options off the bench. Stritzel finished with seven points in the contest, all of which came in the final frame.

The Crimson now embark on a challenging four-game stretch in which it will travel to Cornell, Columbia, Princeton, and Penn in the span of two weeks. But with the first weekend sweep of the season in the books, the team is confident in its ability to continue its winning ways.

“I definitely think [our comfort level]’s through the roof,” Sussman said. “Our troops, we practice here every single day. But I think that our energy stems from each other so hopefully we can take that on the road.”