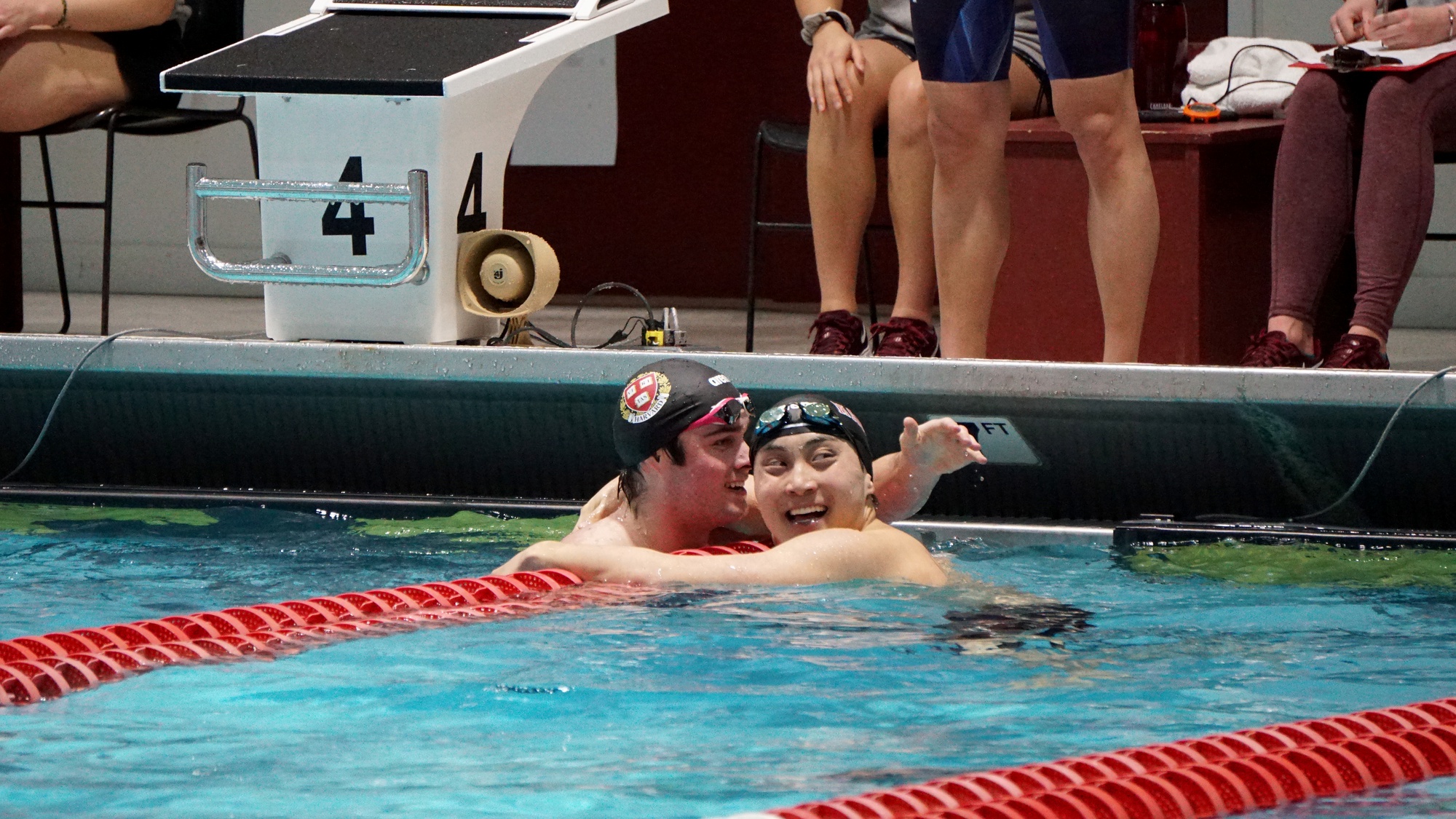 Going into the championship meet this past weekend, the Crimson men had high hopes. Two swimmers shared a well-deserved embrace after yet another positive result that set the team on the path to victory. By Zadoc I. N. Gee
By Zing Gee, Crimson Staff Writer

With this weekend’s Ivy League Championship, the men’s swimming and diving team has claimed the title for the fourth consecutive year, a streak it hadn’t matched since the 1998-2001 seasons. The Crimson entered the meet tied for twenty-third in the national rankings — highest among its Ivy League competitors — and came out on top with 1,439 points over Princeton’s 1,231.

Prior to the meet, Senior co-captain Daniel Chang said “Our team has shown so much heart this season. In the end, our success is not dependent on single individuals, but the collective efforts of the entire team. We’re excited to see how everyone brings their best next week.”

After the meet, junior co-captain Michael Zarian summed up Harvard’s exceptional all-around performance while echoing Chang’s words. “We won the meet because nearly everyone out-swam what was expected of them,” Darian said. “Unlike a dual meet, the conference meet is won by getting more swimmers into A and B finals than other teams. Having everyone step up and sneak into the final heats provided us with a lot of depth to score more.”

Day two of the event began with first-year Cole Kuster beating out Dartmouth’s Connor LaMastrain in the 500-yard freestyle by 0.49 seconds to win the individual champion honors, with a season-best 4:18.17. Kuster’s exceptional swimming continued through days three and four, when he won his second individual champion honors in the 1,000-yard freestyle.

Kuster bested Princeton’s Dylan Porges by 0.44 seconds with a time of 8:57.24, providing a key points boost as the Crimson and Tigers had gone back and forth throughout the earlier events of night three. On the fourth and final night, Kuster placed second in the 1,650-yard freestyle with a 15:10.30 to close out his stellar performance in the event.

“We just got better and better as the weekend went on,” said senior co-captain Daniel Chang. “Every fast performance “fired up the entire team moving onto the next race … we built on the momentum and it showed in the final team scores.” After the meet, Chang was named the Harold Ulen Career High Point Swimmer, having tallied 289 points over his four-year career.

Day three saw the Crimson well-represented in the 200-yard freestyle championship finals, as Rawls won the individual champion honors in 1:34.75, edging out second place by 0.23 seconds. Rawls was followed by Holmquist and Reihman in fourth with a 1:35.64 and fifth with a 1:35.94 (NCAA B-cut times), respectively. Sophomore Jacob Johnson finished fourth in the 100-yard butterfly, in an NCAA B-cut time of 46.58, while Zarian earned another trip to the podium, finishing second in the 400-yard IM with a 3:46.77.

The 400-yard medley relay of Grant, junior Charles Vaughan, Gures, and Rawls placed second in 3:09:09 behind Columbia. Gures continued to rack up points, as he set a new Blodgett Pool and program record en route to winning the 100-yard butterfly with a 45.27.

On the diving side, junior Alec DeCaprio and senior Austin Fields dove in 1-meter dive finals, placing fifth and sixth, respectively. Fields and DeCaprio continued to represent Harvard well in the 3-meter dive consolation finals, finishing second and fourth with 328.20 and 313.95 points, respectively. First-year Luke Foster finished eighth with a 305.85.

On the final day of competition, the Crimson once again performed well in the championship finals — this time in the 200-yard backstroke — as Grant won individual champion honors with an NCAA B-cut time of 1:41.49, followed by Zarian and Simpson in fourth and eighth, respectively. Sophomore Jake Johnson placed second in the 200-yard butterfly with an NCAA B-cut time of 1:43.07, and the 400-yard freestyle relay of Reihman, Rawls, Holmquist, and junior Levente Bathory closed the meet with a third-place 2:54.44.

After that, Harvard cheered as coaches jumped off the diving boards into the pool, celebrating their fourth consecutive Ivy League Championship title. Harvard swimmer Dean Farris, who holds the NCAA and American record in the 200-yard freestyle (1:29.15) did not compete this season as he trains for the Olympics. Competing without Farris at this year’s Ivy Championship revealed the true depth and talent of this year’s Crimson squad and the promising future ahead.