Men's Lacrosse Bounces Back With Win Against Fairfield 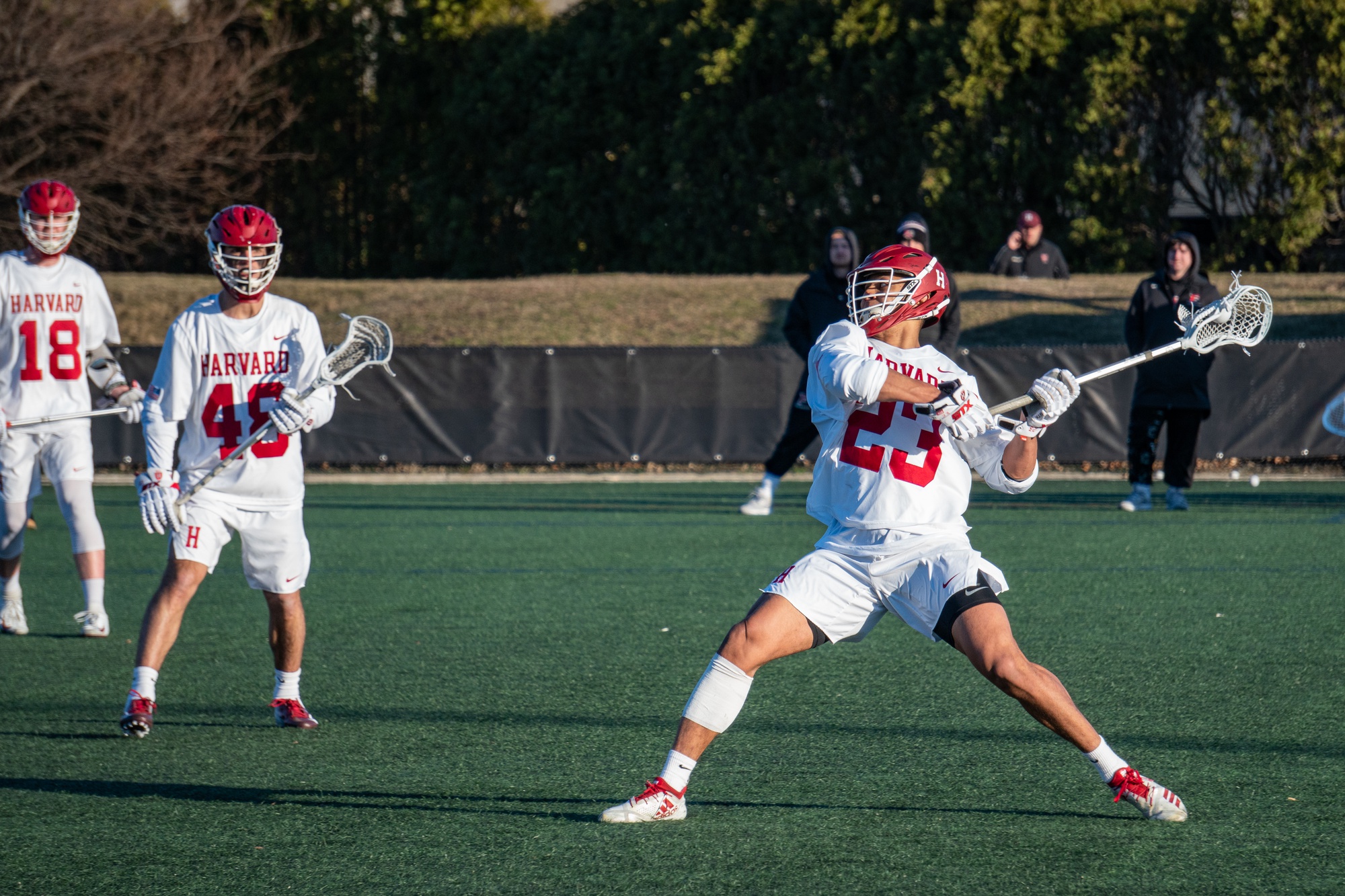 After a three-game stretch to start the year that took Harvard all across the region, the Crimson finally returned — not only to its home at Jordan Field, but also to its winning ways, as it edged past Fairfield 15-12 in a back-and-forth game.

The week-long wait to take the field after a crushing, 15-14 loss at Albany (2-3) came to an end with the arrival of Fairfield (4-2), Harvard’s final non-conference opponent before the Crimson begins Ivy League play.

It was clear that the team members were raring to get back on the field and prove themselves, as less than two minutes into the game, sophomore midfielder Nick Loring raced down the left end of the field, and, with a defender at his back, ripped a shot past Fairfield’s goalkeeper to give Harvard (2-2) the early lead.

“Our coaches instill a lot of confidence in us to make decisions within the flow of the game,” said Loring. “As an offensive unit, we’ve learned to trust each other’s judgment in terms of capitalizing on opportunities early in possessions. Our defense had done a great job preparing us all week for what Fairfield was going to show us, so, fortunately, I was able to have a general idea of what to expect coming out of that first dodge.”

The Crimson kept up the early pressure, with senior attacker Ryan Graff and first-year midfielder Mark Stephens each adding goals before five minutes had elapsed off of the clock. Not long after, senior attacker Jeremy Magno scored off of an assist from captain and senior attacker, Kyle Anderson, who, not four minutes later, netted a goal of his own.

The early abundance of goals, coupled with solid play on both ends of the field, allowed Harvard to carry a 5-2 lead, as well as a great deal of momentum, with it into the second quarter.

However, it would take more than a hot start to win this game. As Anderson noted after the Albany game, it takes four complete and competitive quarters to secure wins. Despite the early lead, a Fairfield goal less than a minute into the second quarter — which brought the Stags within two goals — may have allowed this thought to re-enter into the mind of the Crimson. But Harvard quickly responded to thwart any possibility of a comeback. Following Fairfield’s goal, the Crimson rattled off four straight goals from four different players (nine different players scored on the day), resulting in a 9-4 halftime lead.

“We felt as though we had yet to play our first complete game, as we had one to two-quarter long lulls in both the Albany and Holy Cross games,” Loring said. “We definitely put an emphasis on closing out possessions and quarters strongly all week, and I think the biggest in-game difference that kept our pace of play high was both our ability to gain extra possessions through ground balls and riding, and also the energy that our bench brought throughout the game.”

Harvard was certainly tested again in the third quarter, as Fairfield netted four goals, including three straight to start the quarter. But the team remained true to its objective and responded with four goals of its own, two of which came from Loring, who netted a hat trick on the day.

In the fourth quarter, the Stags made their final comeback push, but strong defense, along with goals from junior midfielder Kyle Salvatore and sophomore attacker Austin Madronic (which earned him a hat trick of his own) helped keep Fairfield’s efforts at bay. By the time the contest came to a close, the Crimson had secured a hard-fought victory.

“We’ve struggled a lot with clearing the ball against the ten-man ride,” said junior goalkeeper Kyle Mullin, who recorded 14 saves in the win. “This week in practice, we spent a ton of time preparing for Fairfield’s ten-man, and we did a good job against it on game day.”

After going 2-2 to start the year, Harvard will now move into Ivy League play, beginning with Brown (3-2) next Saturday. Although Brown may not be one of the top teams that immediately comes to mind in the Ivy League, the Bears are certainly still a foe to be reckoned with, as the team is coming off of a 14-13 win against the defending NCAA Champion No. 8 Virginia Cavaliers (4-1).

“The most important game of our season is always the next game,” said Mullin. “We are happy about our win yesterday, but by no means satisfied with how we played. We will continue to develop in practice and prepare for a big one this weekend. Brown is a tough opponent and we are excited for the opportunity.”

“The Ivy League is obviously incredibly strong this year, which is really exciting,” said Loring. “There are no weak-links in the league this year, so we have to take each week as it’s own individual season. Our team is far from a finished product, so I think our biggest keys going into Ivy play are to continue to improve and to just stay focused on our next opponent.”

The message of staying focused on one game at a time has been reiterated by several team members and will be crucial for taking on the slate of top-rated foes still on tap.

Yet the Crimson has already been battle-tested this season, and, if the team can continue to play together, from start-to-finish, as it did against Fairfield, Harvard will be a force to be reckoned with in the Ivy League this season.