Harvard Goes 1-2 on the Road to Open Season 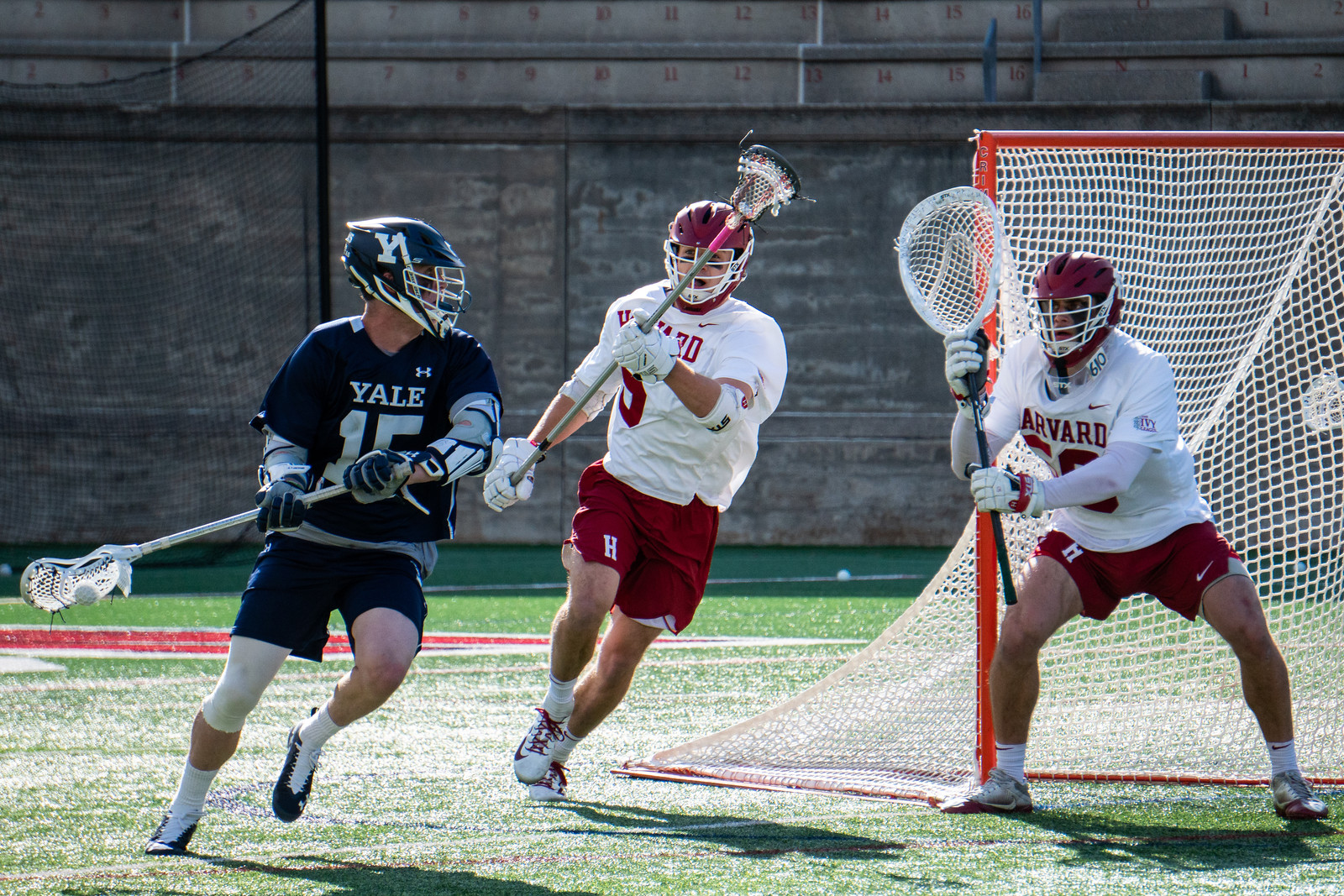 Harvard will host Fairfield in its first home contest of the season this Saturday at 3:00 PM on Jordan Field. The Crimson went 1-2 on the road to open the season, defeating No. 19 UMass before falling to Holy Cross and Albany, with all three games being decided by just a single goal. By Brendan Chaupis
By Ben Morris, Crimson Staff Writer

As the spring season brings about the re-emergence of warmer weather and melting snow, with it too comes the beginning of another lacrosse season.

It had been 301 days since the Crimson (1-2) last took the field in a matchup against Yale that concluded the up-and-down 2019 season. Since then, the program has undergone some changes–including the introduction of a new coaching staff. Gerry Bryne, a former assistant coach of the Notre Dame Fighting Irish team for 16 years, now takes the reigns for Harvard and looks forward to having an immediate impact.

While there have been some changes on the coaching end of things, as for the players, much of the team is still composed of its core members from last season. The squad not only features a veteran roster that includes 14 seniors, but the entire starting lineup, aside from one player, is returning and want to continue to build and get better as a team.

One of these starters is junior goalkeeper Kyle Mullin, who, when asked about the transition from the 2019 season to the 2020 season said, “Our entire coaching staff changed in the offseason and there was definitely a learning curve for us when we got back to campus. As a group, we’ve just tried to embrace the new culture that this coaching staff has brought in. We’ve got a great group of guys who are all committed to each other and the process of becoming a better team.”

Harvard began the season by making the near-two hour commute to take on in-state rival, No. 19 UMass Amherst (4-2), on February 22. Although the Crimson allowed the first goal of the game, the team fired right back, going on a 6-0 run. However, each goal proved to be crucial, as, by the fourth quarter, the Crimson saw its lead vanish and found itself in a tightly contested, 9-9 game. With just over two minutes to go, and the fate of the game still up for grabs, sophomore midfielder Nick Loring came up big for Harvard, scoring what would ultimately be the game-winner (and his second goal on the day). The Crimson held on to the 10-9 lead, winning its first game of the year and avenging the home-opener loss to UMass last season.

Three days later, Harvard hit the road once again, this time traveling to take on the Holy Cross Crusaders (4-2). Although Holy Cross may have had an advantage, as it began its season on February 1 and already had four games under its belt by the time the Crimson came to town, Harvard certainly had a chip on its shoulder–likely due to the heart-breaking, 11-10 double-overtime loss Harvard suffered in last year’s matchup. The Crimson came out strong, rallying off four straight goals to grab the early advantage. However, in a mirror opposite of the UMass game, it was the opponent who this time went on a 6-0 run, and, by halftime, the Crimson found itself down by two. Despite being down 9-5 with 10 minutes left in the game, Harvard did not quit. In fact, the team rallied all the way back, and, with 45 seconds left, the Crusaders held only a 9-8 lead. Yet, even with the impressive comeback, the Crimson came up one goal short, suffering its first loss of the year at the hands of Holy Cross.

The following Saturday, Harvard made the trip to New York to take on Albany. The high-scoring first half saw a combined 17 goals, with the Great Danes carrying a 10-7 lead into the second half. Despite being down by three, the Crimson had the momentum going into the third quarter, as the team had fought back from an early six-goal deficit. The battle continued through the third quarter and into fourth–setting the stage for an intense back-and-forth. The score was tied several times in the final stage of action: 12-12, 13-13, and 14-14. Every time Albany would go ahead, Harvard would strike right back. The Crimson put up a valiant effort–led by hat tricks from junior midfielder Jack Frisoli and sophomore attacker Austin Madronic–but the Great Danes put in the eventual game-winner with three minutes left, and Harvard would fall 15-14.

Three games into the young season, the Crimson has already been battled-tested, as each contest has been decided by a single goal. When asked about the start to the season, captain and senior attacker Kyle Anderson, who is tied for the team-lead in points (nine), said, “We’ve been in every game, with two of the three coming back from five-plus goal deficits. We definitely need to eliminate the lulls we get into for entire quarters of games. We’re working on cleaning up our clear and stick work every day to make sure we are efficient on the field and not hurting ourselves. Coach Byrne loves to say ‘don’t give the other team opportunities that they can’t earn themselves,’ and if we clean up our turnovers in the middle of the field, we can do just that.”

“All of us are very excited as to where this season can go, and, obviously we’d love to be three-and-zero instead of one-and-two, but I’m confident that early season, one-goal losses will not define this team,” Anderson added. “We know how to stay in games and execute comebacks late in games. The final step will just be finishing the game with a win.”

Harvard will have its chance to get back on the field and bring its record back to .500 this Saturday, with its home-opener against Fairfield. “We’ve been on the road for our first three games this year,” Mullin said. “We’re really excited to play on home turf on Saturday. Fairfield is a very good team and we want to improve on our mistakes from our past games and try to get one in the win column.”

It is clear that there is a fire inside this team and a hunger to prove itself–especially within a conference that boasts several top teams in the nation. Both Anderson and Mullin discussed the ultimate goal of making the Ivy League Tournament, but that the key is to take the season one game at a time and focus on improving with each one.

The next chance to do that will be at 3:00 pm this Saturday, back home at Jordan Field.