It’s Playoff Time for Women’s Ice Hockey, But Not Just at the Collegiate Level 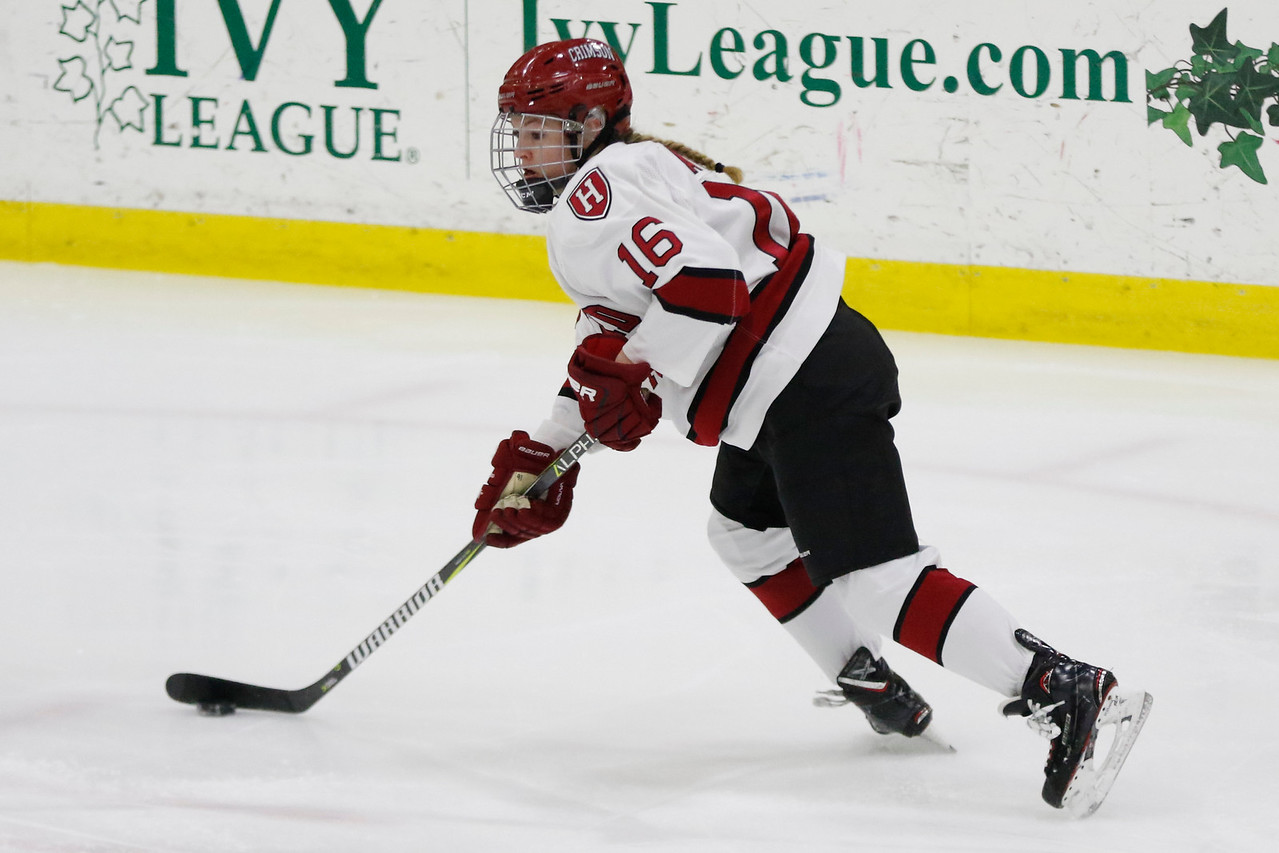 This week, No. 10/10 Harvard women’s ice hockey is preparing for its first appearance in the ECAC semifinals since 2015. The team will face off against No. 1/1 Cornell, the conference’s one-seed and tournament host, who posted a 19-0-3 undefeated record in league play. The showdown will give the Crimson a chance to pull a major upset, appear in the ECAC Championship game, and potentially qualify for the NCAA Tournament. The contest with the Big Red, however, will not be the only playoff game this weekend that involves Harvard players.

On Sunday, the same day as the ECAC Championship game, the Boston Pride of the National Women’s Hockey League will host a semifinal against the winner of the play-in game between the Connecticut Whale and Buffalo Beauts. The Pride, who posted a near-perfect 23-1 record, cruised to the NWHL’s top record behind a core of four Crimson alumni: Jillian Dempsey ‘13, Mary Parker ‘16, Brianna Mastel ‘17, and Lexie Laing ‘19. In fact, the Harvard skaters play critical roles for Boston as well. Dempsey is the team’s captain and became the first NWHL player to cross the 100-point threshold in a career in the league’s history. This season, Dempsey has put up 40 points, which leads not just the team but also the entire league. Laing and Parker have each passed the point per-game mark with 27 and 24 points on the season respectively. On the defensive end of the ice, Mastel has added seven points and a +10 plus-minus.

“To be with Harvard hockey players who I never actually played with at Harvard—to see those connections are being made beyond the college days—[is] definitely something special,” Dempsey said. “Our love for Harvard runs deep… [It’s] so great to be able to have fellow Crimson on the team.”

Boston’s Feb. 15 matchup with the Connecticut Whale served as one of the best examples of the Harvard influence on the team. As the Pride faced off against a struggling Whale team, an upset looked as though it could have been in the cards. Midway through the game, the Whale found itself right in the mix with the score deadlocked at 0-0. Laing and Dempsey, however, had other plans for the night.

In the late second period, Laing collected the puck off of the end boards and deftly powered it into the top shelf from the slot for the game’s first score. In the early third period, Dempsey battled in front of the net to pry a loose puck away and converted the hustle play into the game-winner. In a tight game, the former Crimson greats would provide the Pride with the edge it needed, an edge the players had honed in their college days.

“[Harvard] helped prepare me for the time commitment and giving all of what I have to every shift and every practice,” Laing said. “Making sure that...when it is my time to step on the ice and play, that I’m at my best.”

Transitioning from Harvard, the Crimson alumni have found a knack on the Pride roster, picking up from the skills, lessons, and challenges learned from many hours on the ice at the Bright-Landry Hockey Center. In their careers, they cited Havard head coach Katey Stone’s system as continuing to resonate with them.

“One of the biggest mantras of our team in my time at Harvard—and still to this day— is ‘team first.’ That kind of mentality is something that has always stuck with me—thinking of what I can do to help the team,” Dempsey said. “‘Outwork, outhustle’ was another common phrase that she [Stone] would say repeatedly. That one feels like it’s embedded within me because that’s the mentality and kind of a style I play, where I’m trying to consistently outwork the opponent and put in the extra effort and hope to see that pay off on the other end. So much of what I experienced at Harvard is ingrained in me as a player and as a person. It’s with me to this day.”

The mantra seems to have carried over the years of Harvard hockey. While Laing never overlapped with Dempsey, the more recent grad echoed the same sentiment, using the exact phrase “team first mentality” as well to describe the core value of Harvard hockey.

“You just have to put everything you can to make sure that you’re ready for the team,” Laing said. “That’s one that still resonates with me a lot.”

In addition to the value of selflessness, time management was a key takeaway from Harvard’s rigorous schedule. And the pro level has brought the importance of time management to a new dimension. While college hockey offered the structure of daily practices, workouts, and team meetings along with constant contact with teammates, the NWHL requires a great deal of independence. The league’s players work other jobs (or attend graduate school as Laing does) and have to carve out time for hockey, practicing late at night a couple of times per week and traveling on weekends, sometimes to Connecticut and New Jersey but other times as far as Buffalo and Minnesota.

“I teach, and there’s a range of other professions on the team,” Dempsey said. “After a travel weekend or after a tough week, it’s great to just have a day and recover and relax and take that necessary time. But when you have the work week that starts on Monday, that’s not really an option for us. We learn to balance the challenges of playing and training hard with trying to make sure we’re getting the proper rest and maintaining great quality work at our jobs.”

Yet Dempsey relishes the challenge of juggling the jam-packed schedule.

“I always say that I have the best of both worlds,” Dempsey said. “There are some tiring days, but you make it work, you balance everything.”

Despite the busy balance of work and games, the players have taken advantage of being in the Boston area. With the convenient location, heading back to campus for the occasional game has offered the unique opportunity to stay connected.

“I definitely go to as many of the home games that I can,” Laing said. “You still want to be on the ice and still think you’re part of the program, especially with such a short turnaround.”

Going to games, the alumni have had a lot to enjoy. The Crimson has appeared on-and-off in weekly installations of the national top-10 polls en route to an 18-13-1 record and a four-seed in the ECAC playoffs. And despite not posting quite the same prolific winning percentage as the Pride, the two teams find themselves in very similar positions this weekend. Wins would earn both squads championship game appearances while losses would mean time to go home. However, while Harvard only clinched ECAC quarterfinal home-ice advantage in the second-to-last weekend of the season, the Pride had already solidified the NWHL one-seed in January. Nonetheless, under the leadership of Dempsey as captain, the team has sought to put its regular season behind it and readjust its focus.

“We know that the only way that we’re going to be ultimate champions and be successful is if we continue to improve,” Dempsey said. “We can’t stay stagnant. We can’t get complacent. We know that the focus is going to be cranking up the intensity and start playing some playoff hockey. It’s going to stem from just putting in the work and winning the battles and doing those little details the right way. That’s going to be our focus every practice, every period from here on out.”

As the season draws to a close and the calendar turns to spring, playoff hockey abounds, and Crimson skaters will fight for a championship not just in Lynah Rink in Ithaca but also at Warrior Ice Arena in Boston.