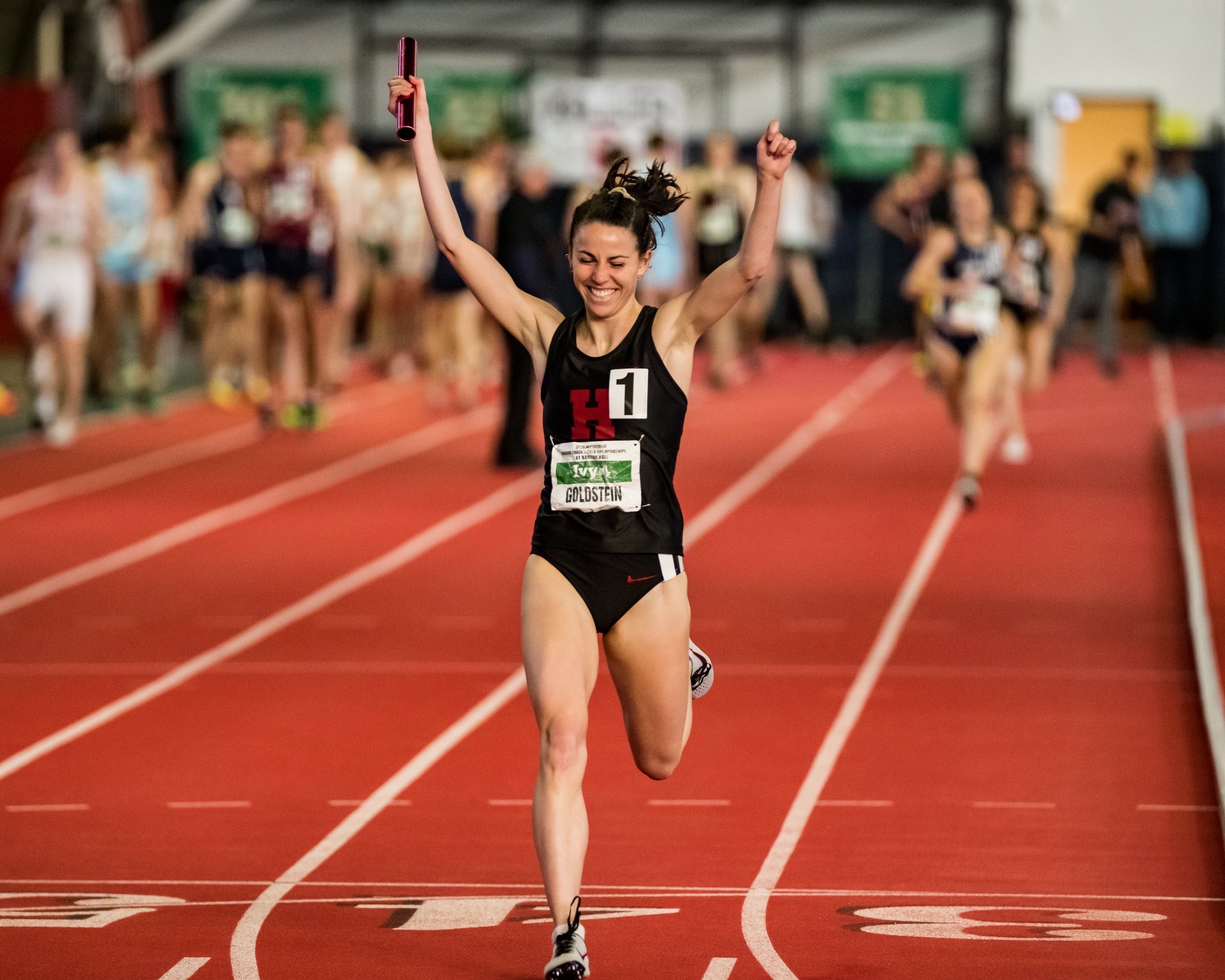 Setting Her Own Pace: Abbe Goldstein, Comeback of the Year

For Harvard distance runner Abbe Goldstein, the abrupt end to her junior track and field season due to COVID-19 did little to diminish the sweeping success of her 2020 campaign. Goldstein enjoyed a breakthrough performance on the track, and her work ethic, optimism, and resiliency have led to triumph off of it as well.

After two seasons of running long distance, Goldstein’s transition to middle distance events this year vaulted her to the top of NCAA leaderboards. At the Ivy League Indoor Championships, she not only placed second in the 800-meter race but also led the distance medley relay team to a first-place finish as the final leg. Goldstein’s mile time placed her within the top 16 in the country, earning her a spot at the NCAA Indoor Track and Field Championships.

While Goldstein led the Crimson track and field program’s success this past winter, her path to victory was not free of external pain and internal battles. Goldstein’s severe gastrointestinal (GI) problems produced anxiety and mental health struggles. Moreover, jumping over these large hurdles each race negatively impacted her performance on the track, only causing her problems to grow larger.

“That whole situation was really making racing an unenjoyable experience, which, in turn, was adversely affecting my mental health,” Goldstein said. “It was really just a big cycle because I’ve learned that a lot of my anxiety is what is causing my GI issues and that I just have a very large connection between my physical health and my mental health.”

After returning to campus in the fall of 2019, Goldstein made the difficult decision to step back from NCAA racing and sit out Harvard’s cross country season. She continued to train in the fall, but the most important actions during this period were her meetings with Harvard’s Counseling and Mental Health Services (CAMHS).

“Going to CAMHS starting in early November 2019 was the biggest piece in all of this,” said Goldstein. “I’ve been focusing a lot on paying attention to how my behaviors affect my thought processes and how to pursue racing purely for the joy of it without placing too many expectations regarding performance on it. This time really allowed me to reconnect with why I love the sport and has actually led to my best collegiate performance so far.”

When Goldstein returned to the track in January 2020, the progress she made in her mental health immediately yielded improvement in her racing times. This level of achievement came after the Crimson’s men and women cross country teams made history by both qualifying for NCAA nationals. She was proud of her cross country teammates, but this period of watching from the sideline in the fall made Goldstein’s string of personal bests in the winter all the more satisfying. 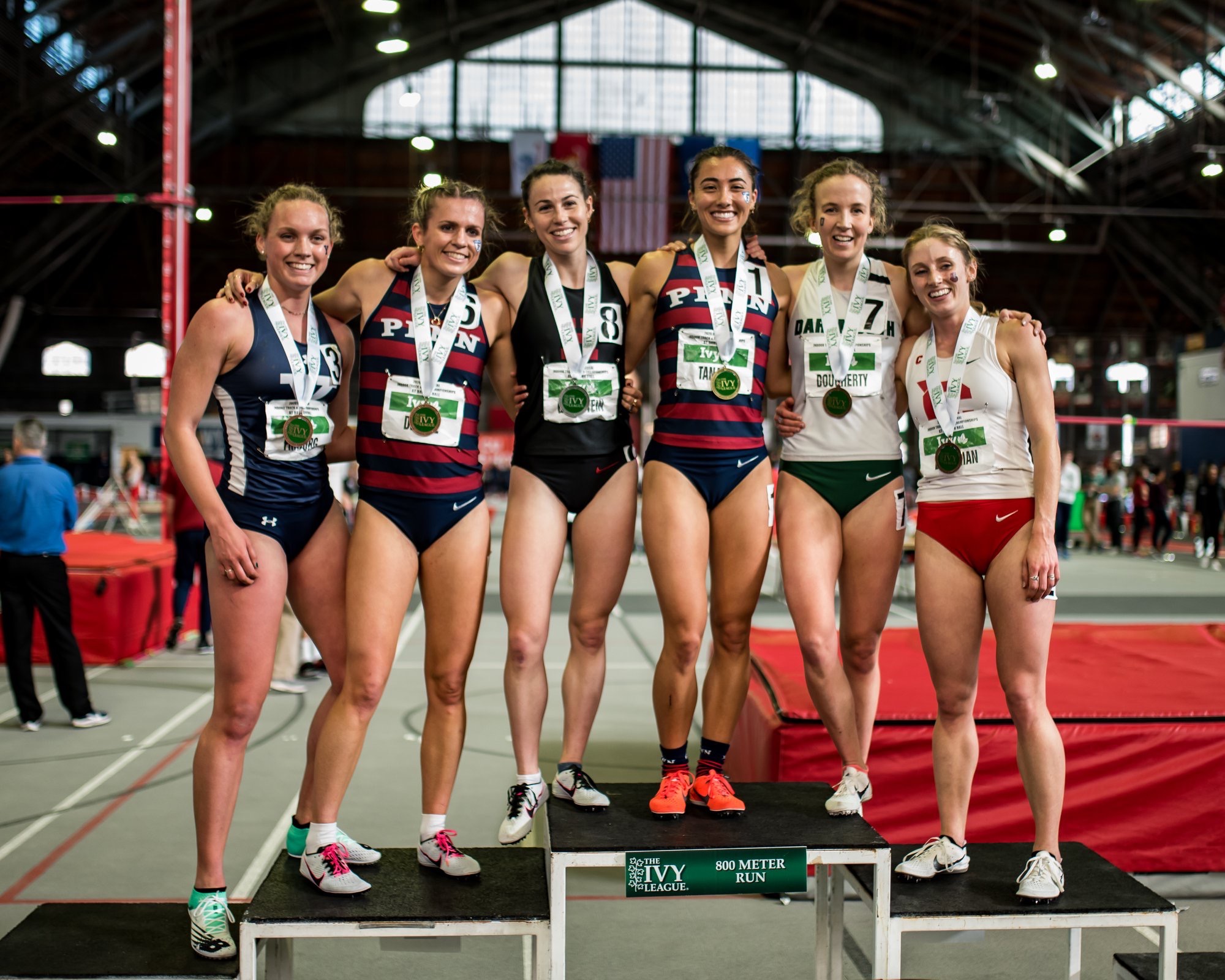 Goldstein made a couple of trips to the podium during the Ivy League Indoor Championships. By Courtesy of Abbe Goldstein

“I think the word ‘fulfilling’ is really the right one for describing how I felt after witnessing my team have a great fall and then having a great winter for myself,” she said. “I’ve learned a lot about patience throughout my collegiate running career, and all of the lows I experienced really made the highs of the winter that much greater.”

In addition to CAMHS, Goldstein credits her coaches and teammates in contributing to her personal growth between these two seasons.

“My coach, Alex Gibby, also played a huge role in this whole process,” she said. “He was really supportive when I explained my reasoning and desire to take the fall season off […] I also can’t ignore how supportive a lot of my teammates were throughout both the fall and the winter. There were no feelings of resentment towards me taking the time off that I needed, and when I returned to racing it was really great to have such a fun group to train with.”

In the eyes of her teammates, Goldstein has played a large role in the positive, more connected relationship and the strong work ethic that defines the women’s distance group.

“She’s very tenacious, very detail-oriented,” said distance teammate and junior Anna Juul. “Even when she took time off in the fall, she was still showing up and getting work done. There were no races on the calendar, but she was going to workout regardless.”

“Abbe is definitely someone that I feel like a lot of people feel comfortable going to for advice, especially if it concerns mental health and finding resources concerning that,” said Judy Pendergast, also a junior and distance teammate of Goldstein. “She’s also just a great presence to have at practice, and she’s helped lay the foundation for what this team is today.”

As the threat of COVID-19 persists, the prospects of a full cross country and track and field season for Goldstein remain in question. Regardless of what form her senior year takes, the impact of Abbe Goldstein and her many victories as a Harvard student-athlete have forever positively shaped her friends, her team, and her campus.

—Staff writer A.J. Dilts can be reached at aj.dilts@thecrimson.com.